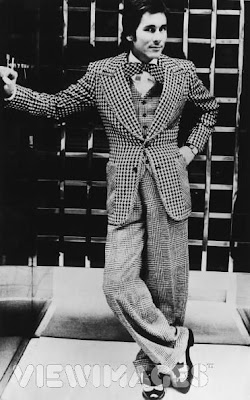 Tommy Nutter (17 April 1943– 17 August 1992), was a British tailor, famous for reinventing the Savile Row suit in the 1960s.
Born in Barmouth, Merioneth, he was raised in Edgware, Middlesex, where his father owned a local High Street Cafe. After the family moved to Kilburn, Nutter and his brother David attended Willesden Technical College. Nutter initially studied plumbing, and then architecture, but he abandoned both aged 19 to study tailoring at the Tailor and Cutter Academy.
In the early 1960s he joined traditional tailors Donaldson, Williamson & Ward. After seven years, in 1969, he joined up with Edward Sexton, to openNutters of Savile Row. They were financially backed by Cilla Black and her husband Bobby Willis, Managing Director of the Beatles' Apple Corps Peter Brown, and lawyer James Vallance-White.
The business was an immediate success, as Nutter combined traditional tailoring skills with innovative design. He designed for the Hardy Amies range, and then for the man himself. His clients included his investors, plus Sir Roy Strong, Mick Jagger, Bianca Jagger and Elton John. Nutter himself was most proud of the fact that, for the cover of The Beatles' album Abbey Road in 1969, he dressed three out of the four: George Harrison elected to be photographed on the road-crossing in denims.
In the 1970s his bespoke business became less successful, but he branched out into ready to wear clothing, marketed through Austin Reed. He also successfully expanded into East Asia, establishing the Savile Row brand in Japan. In 1976 Sexton bought Nutter out of the Business. Nutter went to work for Kilgore French and Stanbury, managing his own workroom. Sexton continued to run Nutters of Savile Row until 1983, when Nutter returned to the row with a ready to wear shop; Sexton set up a business in his own name.
In the 1980s, he described his suits as a "cross between the big-shouldered Miami Vice look and the authentic Savile Row." He created the clothing of The Joker worn by Jack Nicholson in the 1989 film Batman.
Nutter died in 1992 at the Cromwell Hospital in London of complications from AIDS. 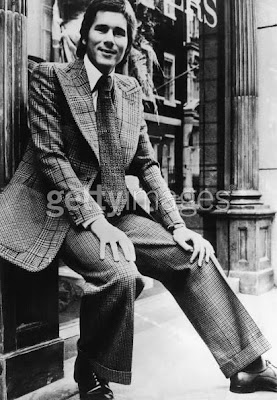 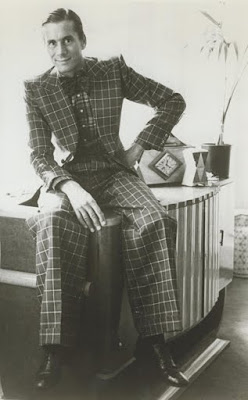 TOMMY NUTTER, the avant-garde Savile Row tailor, came to prominence in the late Sixties as a man who singlehandedly reconciled the traditions of Savile Row, laid down in the late 19th century, with the male peacock revolution of the Sixties and the often extravagant demands of his clients, the leading dandies of swinging London.

Born in Wales in 1943, Nutter spent his formative years in Edgware, north London, where his father was proprietor of a cafe catering to a clientele composed of truckdrivers, gas-fitters and builders. The family moved to Kilburn and Tommy and his brother David had a normal suburban childhood, punctuated by highly enjoyable holidays at Butlin's holiday camps. He attended the Willesden Technical College where, according to his brother, he studied plumbing.

In the early Sixties, Nutter obtained a position with Donaldson, Williams & Ward, traditional Savile Row tailors with premises in the Burlington Arcade. Here, starting as an apprentice, he absorbed the lore and the rules of the English gentleman's classical wardrobe. His seven years with the firm gave him a thoroughgoing knowledge of his craft, and a lifelong respect for its rules.

In 1968, Nutter left Donaldson Williams & Ward to found his own business, first at 35a Savile Row, later in its present handsome double-fronted premises at No 19. He was backed by clients including Cilla Black and her husband Bobby Willis, Peter Brown, then Managing Director of the Beatles' Apple Corps, also situated in Savile Row, and by the lawyer James Vallance-White.

The business was an immediate success for, like Sir Hardy Amies, a Savile Row dandy of a previous generation, Tommy Nutter produced lively, contemporary tailoring whose roots were deeply embedded in the craftsmanship and knowledge of Savile Row. Indeed, he made suits for Amies as well as for newer residents of Savile Row, and in particular the Beatles. He was proudest of the fact that, for the cover of the Beatles' album Abbey Road (1969), he dressed three out of the four (George Harrison elected to be photographed on the road-crossing in denims). Other leading dandies of the period were also his clients, including Sir Roy Strong (then Director of the National Portrait Gallery), Mick Jagger and Elton John.

Nutter also applied his craft to dressing female icons of swinging London society at the time, including Cilla Black, a close friend, and Bianca Jagger, who was much photographed at the time in a white dinner jacket with white satin facings. Nutter also made a red velvet suit for Twiggy which became a celebrated and much-copied look when she was photographed wearing it in the early Seventies.

In 1971 he was elected to the Best-Dressed List in the United States, along with the Earl of Snowdon and Hardy Amies. At the time, American Menswear magazine said of Nutter that he was 'tradition spiced with daring'.

'He never got things wrong about clothes,' said the restaurateur and bookshop-owner Stuart Grimshaw, who was a client of Tommy Nutter's from the late Sixties. 'He really knew what he was talking about. One would go in and say, 'What do I wear to go on safari in Kenya?' and Tommy would make one an absolutely correct safari suit, a proper one with all the pockets in exactly the right place.

'This knowledge extended to such minutiae as the correct wearing of half or full brogues or co-respondent shoes. He was an encyclopaedia of correct, classical male style.'

Clients from the hipper purlieus of the aristocracy, from the media, pop stars, and even aspiring teenage dandies from the East End whose ambition, in the early Seventies, was to own a Nutter suit, were drawn to Tommy Nutter not only because of his ineffable sense of style, but also because of his peculiarly ironic personality.

Andrew Lloyd Webber was a client and friend. 'He made me a lot of things when one was younger and trendier,' Lloyd Webber said. 'There was a wonderful maroon coat I remember I wore for Ascot - he was always such fun, very much part of my early life when Jesus Christ Superstar was going on - he made clothes for Tim Rice too - we were all great mates'.

Nutter was a gentle humorist who had a wide and interesting circle of friends attracted by his enthusiasm, by his gentle, self-mocking personality and his acerbic comments on the vagaries of others, always ending with the expression 'But who am I to talk?' He was a prodigious and witty correspondent and his letters to his many friends are treasured. In addition, he delighted in writing to the serious newspapers on topics as far-ranging as the correct buttoning of the suit on a statue of John F. Kennedy, to the scarcity of deckchairs in Green Park. He was always very ready to spring to the defence if his beloved Savile Row came under attack, as it so frequently did in the anarchic Sixties.

Nutter was also a firm believer in the supremacy of the English suit and of English cloth; during the Seventies and early Eighties he took part in huge international fashion shows put on by Reid & Taylor, the Scottish firm of woollen and worsted manufacturers.

With his untimely death, from complications arising from Aids, London society loses a witty and elegant dandy, whose hand-rolled lapels and insouciant manner masked a serious and continuing purpose; to make sure that the craft and traditions of Savile Row tailoring were preserved for, and valued by, his generation.
Publicada por Jeeves em 00:54