"Simpson's in the Strand, is unique. Here, if he wishes, the Briton may, for the small sum of half a dollar, stupefy himself with food. The God of Fatted Plenty has the place under his protection. Its keynote is solid comfort. It is a pleasant, soothing, hearty place – a restful temple of food. No strident orchestra forces the diner to bolt beef in ragtime. No long central aisle distracts his attention with its stream of new arrivals. There he sits, alone with his food, while white-robed priests, wheeling their smoking trucks, move to and fro, ever ready with fresh supplies"
P.G. Wodehouse . 1915. 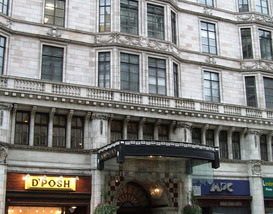 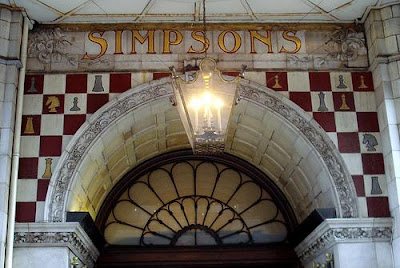 Simpson's-in-the-Strand is one of London's oldest traditional English restaurants. Situated in the Strand, it is part of the Savoy Buildings, which also contain one of the world's most famous hotels, the Savoy.
After a modest start in 1828 as a smoking room and soon afterwards as a coffee house, Simpson's achieved a dual fame, around 1850, for its traditional English food, particularly roast meats, and also as the most important venue in Britain for chess in the nineteenth century. Chess ceased to be a feature after Simpson's was bought by the Savoy Hotel group of companies at the end of the century, but as a purveyor of traditional English food, Simpson's has remained a celebrated dining venue throughout the twentieth century and into the twenty-first. P.G. Wodehouse called it "a restful temple of food".
Since 2005, Simpson's has been run by Fairmont Hotels and Resorts. 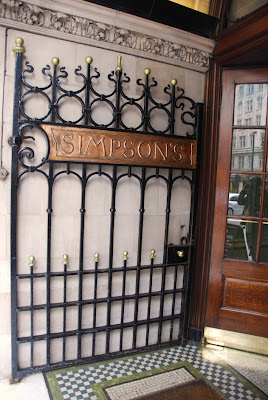 An earlier building on the site was the Fountain Tavern, home to the celebrated literary group the Kit-Cat Club, but this was replaced by Samuel Reiss's Grand Cigar Divan which opened in 1828. The establishment soon developed as a coffee house, where gentlemen smoked cigars with their coffee, browsed over the daily journals and newspapers, indulged in lengthy conversations about the politics of the day and played chess, sitting on comfortable divans or sofas. Regular visitors would pay one guinea a year for the use of the facilities and cups of coffee. The daily entrance fee for others was 6d (2½p), or 1/6d (7½p) with coffee and a cigar.
Chess matches were played against other coffee houses in the town, with top-hatted runners carrying the news of each move. The Grand Cigar Divan soon became recognised as the home of chess in England. Today, one of Simpson's original chess sets is displayed in the Bishop's Room.
In 1848, Reiss joined forces with the caterer John Simpson (1808 or 09–1864) to expand the premises, renaming it "Simpson's Grand Divan Tavern". It was soon established as one of the top London restaurants, becoming a popular attraction with patrons including Charles Dickens, William Ewart Gladstone, and Benjamin Disraeli. Simpson introduced the practice of wheeling large joints of meat on silver dinner trolleys to each table and carving them in front of guests – a custom that still prevails today.The establishment flourished: in the 1851 census, the Cigar Divan's premises were home to the tavern keeper, the manager, and 21 staff. The restaurant was, according to the Baedeker guide for 1866, a "large well-appointed establishment".
Shortly before his death in 1864, John Simpson sold the restaurant to Edmund William Cathie, and in 1865 the business was floated as a limited company. A prospectus was issued for "Simpson's (Ltd)" with capital of £100,000 (£7,356,788 as of 2012), to purchase and extend the Divan Tavern. The prospectus stressed the great increase in trade caused by the opening of Charing Cross station nearby, and that Cathie would remain as manager. He employed the British Master Cook, Thomas Davey, who rose through the ranks to head his kitchens. Davey insisted on the thorough and consistent Britishness of Simpson's. He even replaced the word "menu" with "Bill of Fare".
In 1898 Richard D'Oyly Carte, proprietor of the Savoy Hotel, acquired Simpson's. Carte died in 1901, and his son Rupert D'Oyly Carte took over the business from 1903, in which year Simpsons was closed for redevelopment. All the old furniture and fittings were sold off, including the largest solid mahogany table in existence, 265 chairs, and 60 other mahogany dining tables. The restaurant reopened in 1904 under the name it bears today, Simpson's-in-the-Strand, Grand Divan Tavern. 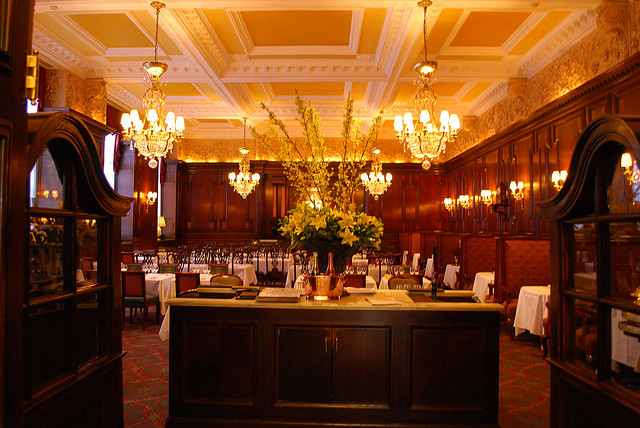 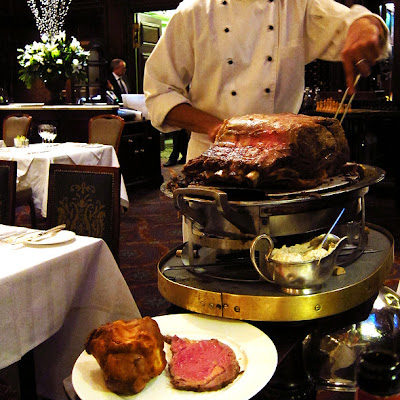 After the war Simpson's, like the rest of the Savoy Group, was hit by a strike of its employees in support of a waiter dismissed from the Savoy Hotel. The matter was judged so serious that the government set up a court of inquiry.[15] After the resolution of that dispute, the next major development in the history of the restaurant was the resuscitation of the pre-war plan to open a sister establishment on the site of Stone's Chop House near Leicester Square. In 1959, Simpson's lost another notable member of its staff. Frederick William Heck died on his way home, having consumed a heavy luncheon, and having completed 55 years’ service, 40 years as manager. Ralph R. Smythe, Heck’s assistant since 1955, was appointed manager.In 1963, the Savoy group finally achieved its aim from 1939 of opening a second Simpson's at the revived Stone's Chop House.
When the first Michelin Guide to England was published in 1974, no UK restaurant was judged worthy of the maximum three stars, or even two, but Simpson's was one of nine London restaurants, including Le Gavroche, awarded a star. In 1978 Simpson's celebrated its 150th anniversary with a luncheon consisting of all the items from the earliest recorded menu, starting with turtle soup, going on with roast sirloin of beef and saddle of mutton and ending with boiled syrup roll. The next year, mutton had to be dropped from the menu, replaced by lamb because procuring top quality mutton was increasingly difficult, and the meat was no longer fashionable. In 1982, after a thirty-year absence, rabbit was restored to the menu; it was served in a cream and mushroom sauce.
In 1984 Simpson's dropped its rule forbidding women from using the panelled street-level dining-room at lunchtime. Before 1984, ladies were asked to use the dining room in the floor above, which was specially decorated in pastel colours. Also on the first floor is the richly-decorated late-Victorian banqueting room, which can comfortably seat more than 100 people. Another banqueting room on the lower ground floor is in a more modern 1930s style. There are also two cocktail bars, the Knight's Bar on the first floor, a popular Art Deco-styled piano cocktail bar, and a bar in The Bishop's Room, which is now only used for functions.
In 1994 Simpson's began serving breakfasts for the first time. A light menu was available, but the emphasis was on hearty traditional English breakfasts. The most substantial offering was, and is, "The Ten Deadly Sins", consisting of Cumberland sausage, scrambled egg, streaky and back bacon, black pudding, fried mushrooms, baked tomato, kidney, fried bread, bubble & squeak and baked beans.
The Savoy Group was purchased in 1998 by a private equity house, Blackstone Group, and, after further changes of ownership, the Savoy Hotel and Simpson's were split off from the rest of the group in 2005 and are run by Fairmont Hotels and Resorts. As at February 2007, Simpson's was managed by Jeremy Hopkins, and the Master Cook was Paul Muddiman.
Simpson's continues to serve classic British style cuisine. The restaurant's dinner specialty is aged Scottish beef on the bone, carved at guests' tables from antique silver-domed trolleys, a tradition that the restaurant has maintained for over 150 years. Other signature dishes include potted shrimps, roast saddle of lamb and steak and kidney pie 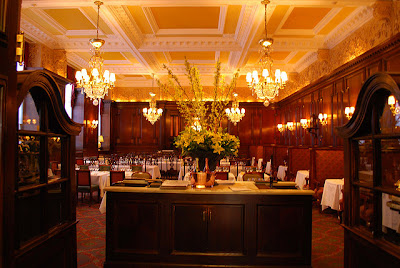 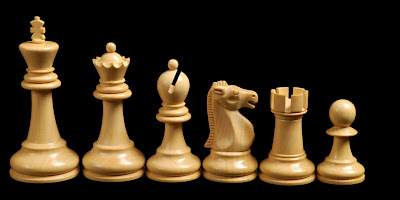 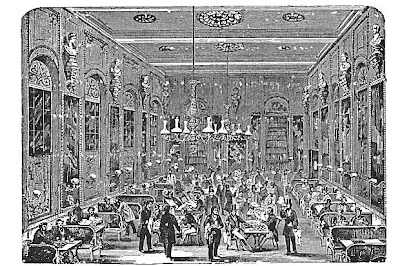 Just as Wimbledon is considered the home of tennis and Lord's the home of cricket, Simpson's could, in the 19th century, justifiably claim the equivalent title for chess. Almost all the top players of the century played there at some stage, including Wilhelm Steinitz, Paul Morphy, Emmanuel Lasker, Johannes Zukertort (who had a fatal stroke while playing there), and Siegbert Tarrasch. It was in Simpson's in 1851 that one of the world's great games, the famous "Immortal Game", was played between Adolf Anderssen and Lionel Kieseritzky. It also hosted the great tournaments of 1883 and 1899, and the first ever women's international in 1897.
When the refurbished Simpson's reopened under its new management in 1904, chess was no longer the principal feature. This alone was sufficient to shift the centre of the chess world away from London permanently, with similar clubs in Vienna and Berlin filling its role. Chess reappeared at Simpson's in 1980, when the finals of the National Chess Club Championship were held there. In September 2003 a small tournament was held there to celebrate the 175th anniversary of chess on the site, and named after the unofficial world champion during the 1840s and 50s, Howard Staunton. By 2006, the fourth Staunton Memorial was declared the strongest London all-play-all tournament since 1986, with high calibre grandmasters such as Michael Adams, Ivan Sokolov and Jan Timman competing. The fifth Staunton Memorial in 2007 featured a field of twelve players, six British and six Dutch. 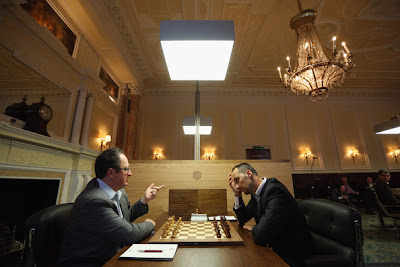 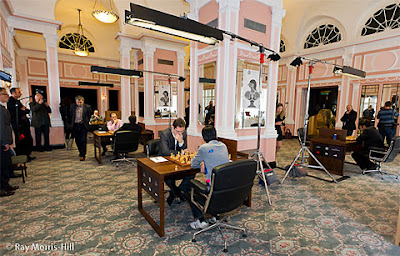