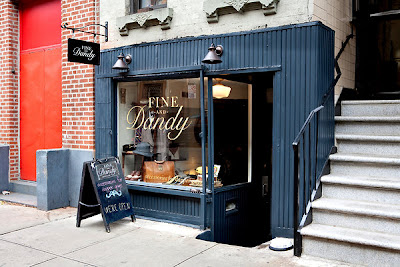 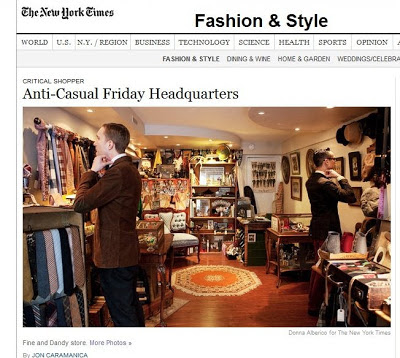 By JON CARAMANICA in The New York Times
Published: December 19, 2012

ONE recent afternoon, two men were sitting in facing chairs in the small below-grade space that serves as the storefront of Fine and Dandy, a shop specializing in the accouterments of the well-dressed life.

Behind the desk in the rear corner of the store was Matt Fox, one of the store’s owners, his hair cropped close, wearing a navy blazer with gray
elbow patches, a shirt with a faint checked-stripe pattern, and a dark, small bow tie. In the other seat was a gentleman who goes by the name Dandy Wellington. He wore earth tones, mostly, a light-colored waistcoat under a rope-brown suit. They were talking, naturally, about Fats Waller. And Chet Baker. And using Pandora to create playlists that emphasize the 1930s and 1940s.

So it’s not quite all vintage at Fine and Dandy — only the ideas. The execution, though, is extremely modern. The store is full of gorgeous house-brand accessories: ties, ascots, braces and so on. Need spats? Available in red or gray wool felt ($65).

I went with the esteemed jazzbo-metalhead Ben Ratliff — like myself, inclined toward dandyism without feeling the need to go whole hog. It’s not religion, merely a guidebook to solving small everyday problems.

This is where Fine and Dandy excels, even if it would prefer a bit of zealotry in its crowd. At every turn was a piece that would improve your outfit, and probably your attitude. I loved the floral suspenders ($59) — one pair light blue and purple on white, the other in pink on black — and also the leather belts with embroidered marlins ($49). The bright-colored ascots ($45) reminded me of the party at the end of senior year of college in which I improvised one with an opera scarf and some creative knotting, a formative night.

All the items are clustered together here, because the shop is tiny, though still bigger than the online shop that’s been in operation for a few years that this physical space is an extension of. (Mr. Fox owns Fine and Dandy with Enrique Crame III.)

It’s also a far richer and more fulfilling experience than the virtual store, which does very little to show off the personality of the products. On the site, they look flat. In the store, they look lived-in and essential. Along one wall are racks of bow ties ($45 to $55), scarves, ties and kerchiefs, in overwhelming abundance, florals and stripes and tartans and tweeds. In a glass case at the back of the store is an assortment of tie bars. There’s a box full of cutely balled knit ties ($45). There are crocheted boutonnieres ($9 to $12) in sprightly colors that could trump real live flowers.

What if this were your life? Those people exist, or more specifically, existed. The walls are covered with them: crumbling black-and-white photos of varsity teams and one array with the descriptor Eminent Judges and Lawyers of New York.

Fine and Dandy maintains a blog and a Tumblr full of style inspiration pictures and snapshots of glamorous men. One entry about encouraging men to dress up on Fridays reads: “In our opinion the world is too casual from a style perspective. This is our anti-casual Friday.”

It was Friday when we were there, though we had not received the memo.

Still, we persevered. Ben bought two silk pocket squares — one in four shades of red, the other polka dotted — as gifts, and also a small bound notebook ($6) that looked as if it would singlehandedly turn your chicken scratch into cursive.

I was drawn to a winter tie in white wool with dashed stripes of green, orange, red and lavender ($59), wearable probably once a year, but what a day that would be. I also bought a pair of gray and purple Pantherella socks with a sort of Art Deco post-argyle motif ($29). (Pantherella is one of the few outside brands the store carries.)

THE purchase was rung up on an iPad, via the Square payment system, with an e-mailed receipt. Again with the modernity.

Hopefully the Internet won’t kill Fine and Dandy’s vibe, though. In addition to its retail business, it has experimented with a couple of brand extensions: style consultations are available, and for a while, so was something called Dandy 911, the Kozmo.com of men’s wear, in which you could have your purchase delivered same-day, at least to mid-Manhattan neighborhoods. (The service was suspended as the retail shop was being opened.)

Or maybe the store should accept its fate as a member of the technological future. On one shelf was a gizmo called a tie selector, basically a device that tells you what color shirt and tie to wear with various suits by rotating a wheel behind a cover with cutouts for each item of clothing. With some refining and expansion, it would make a great app.

DENSE FOREST It might be the smallest retail establishment in Manhattan, but its value per square inch is high; items are crammed everywhere, so scan thoroughly and carefully.

BABY STEPS Dandyism is a way of life, for some, but there are options here for amateurs. Buying a great tie or suspenders is like putting flashy rims on a Jetta: a good start.

ADVANCED PLACEMENT Ask questions: the owners are happy to talk about fabric sourcing and hand-rolled silk and more. 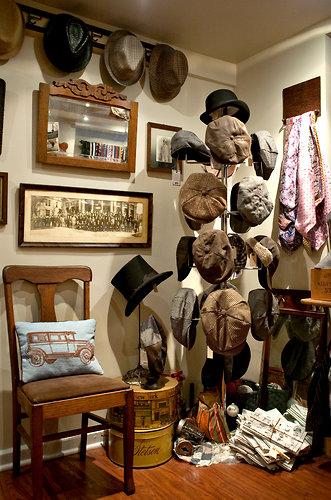 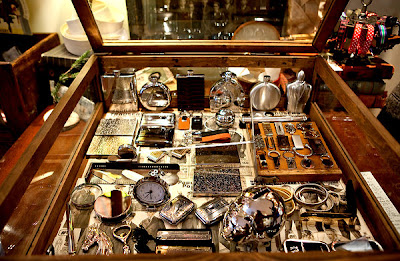 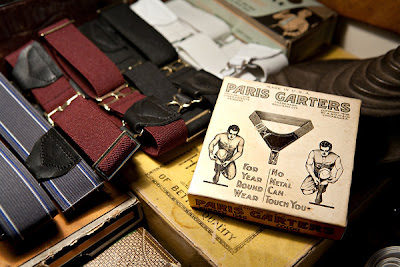 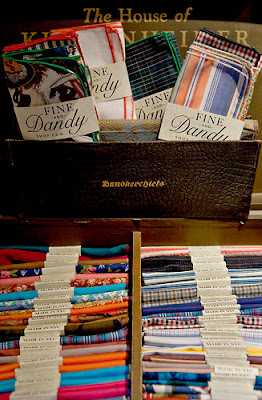 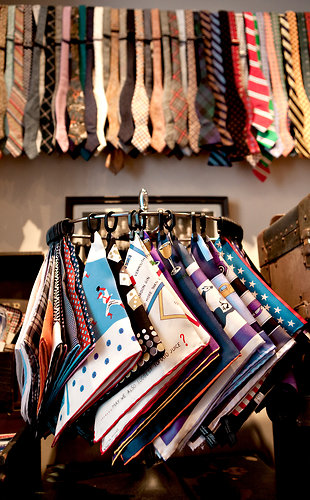 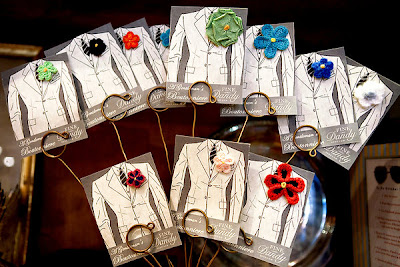 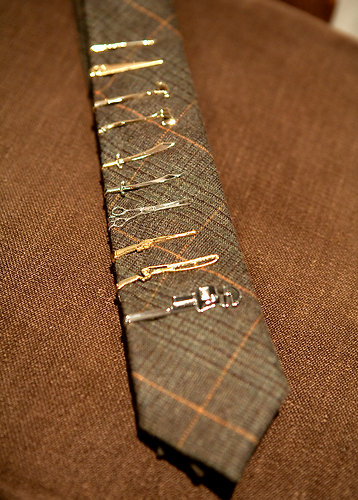