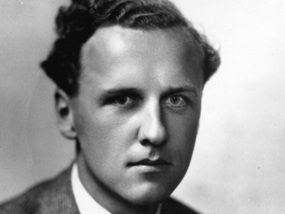 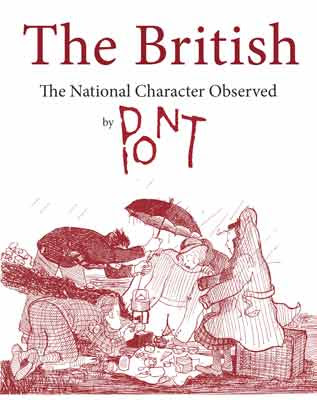 (Gavin) Graham Laidler (1908–1940) was a British cartoonist, noted for his work in Punch magazine in the 1930s.
Laidler was born on 4 July 1908 in Newcastle upon Tyne, England at 6 Osborne Avenue, Jesmond. His father, George Laidler, owner of a painting and decorating business, died when Laidler was 13 and his mother, Kathleen, eventually the family moved south, finally settling in Jordans in Buckinghamshire. Laidler had always hoped to become a cartoonist but, to ensure an income that would adequately support himself and his widowed mother, he enrolled at the London School of Architecture in 1926. After being diagnosed with tuberculosis in 1932, he was unable to continue with an office-based career and started to concentrate on his cartoons. From 1930-1936 he published a weekly strip The Twiffs, in the magazine Woman's Pictorial. In August 1932 he had his first acceptance from Punch; by 1937 he was so popular that the editor, EV Knox, is understood to have made an almost unprecedented 'gentlemen's' agreement' with him to take all his drawings if Laidler would undertake to draw only for Punch - possibly a bid to make sure he was not poached by Graham Greene's new magazine Night and Day.
Under the name ‘Pont’ (derived from a nickname – Pontifex Maximus – he acquired during a visit to Rome), Laidler became one of the most original talents in the history of Punch and his work continues to inspire cartoonists to this day. He is perhaps most famous for his series on the ‘British Character’. This was published as a book in 1938. Another book The British Carry On (1940) portrayed the atmosphere of the phoney war. A famous example shows a placid scene in a country pub, where the radio is tuned to the German propaganda station: 'Meanwhile in Britain, the entire population, faced by the threat of an invasion, has been flung into a state of complete panic.’ 'At Home', and 'Popular Misconceptions' were also successful series, but by the end of his brief career he was also developing a striking new approach, moving away from the detailed, large drawings to economical, one or two figure sketches with pithy captions.
Laidler never married. He died of poliomyelitis on 23 November 1940.
Laidler was tall, good-looking and regarded by all with affection. He completed four hundred cartoons in his brief career, enough to furnish the material for five books. Bernard Hollowood, fellow cartoonist and later editor of Punch wrote a biographical account of his life and work in his book Pont (1969). A further, as yet unpublished, biography was written by Laidler's cousin, Ann Glendenning McMullan MBE. 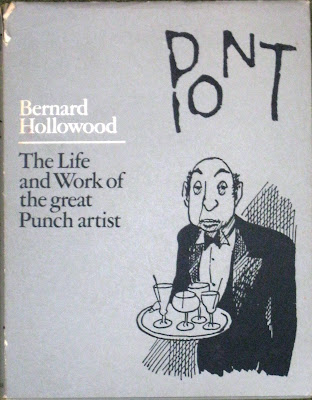 An account of the Life and Work of Graham Laidler (1908-1940) the great Punch artist with 200 drawings and a note on Pont's draughtsmanship by Ian Fleming-Williams ;includes his "English Character" cartoons. 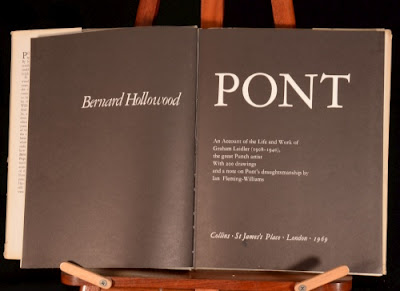 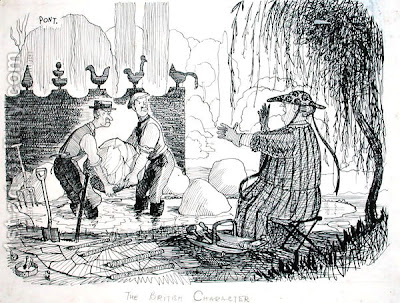 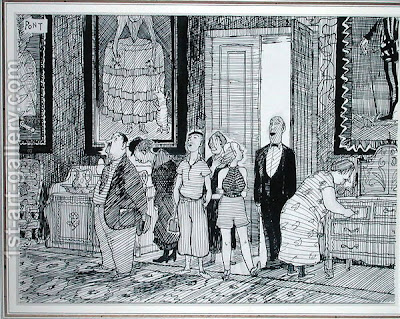 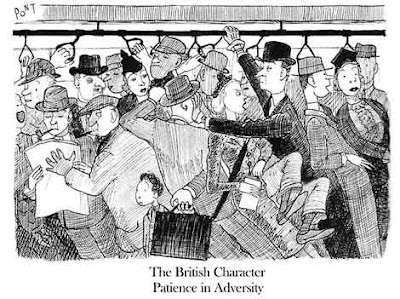 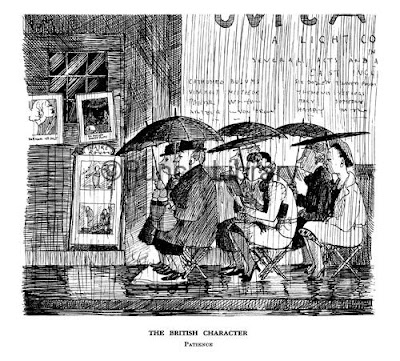 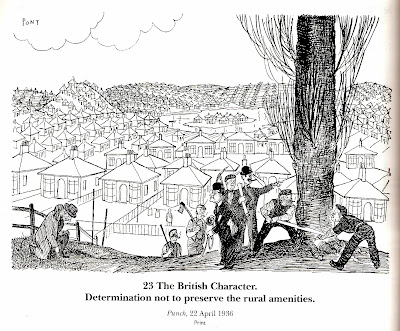 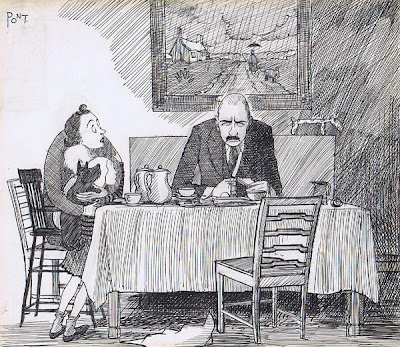 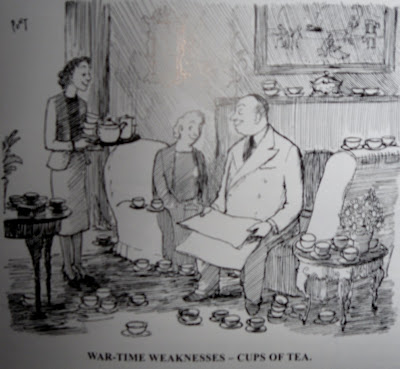 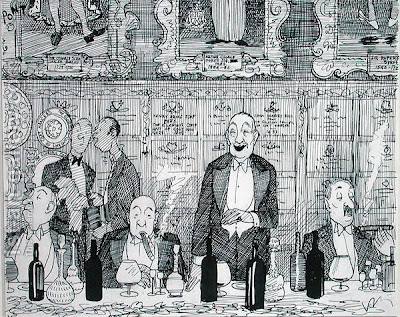 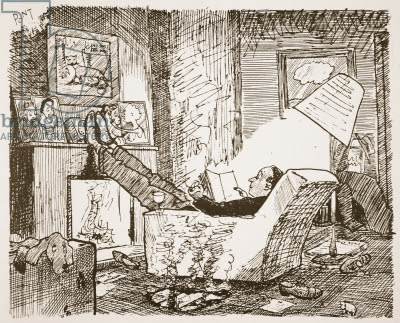 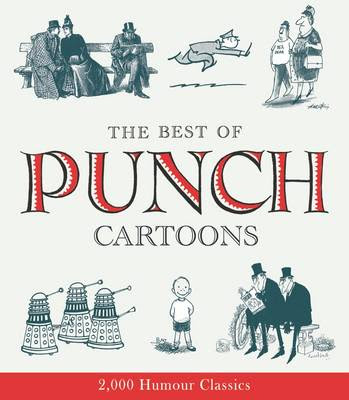 
This Cartooned Isle
By CHARLES McGRATH
Published: December 3, 2009 in The New York Times
The British humor magazine Punch, adornment of countless proper ­middle-class homes, not to mention club libraries, dentists’ offices and Oxbridge common rooms, ceased publication, after more than 160 years, in 2002. It had been on life support since the early ’90s and temporarily went under until the Egyptian businessman Mohamed al-Fayedbought the magazine and relaunched it in 1996, for much the same reason, it would appear, that he bought Harrods department store a few years earlier — because he cared more about venerable British institutions than the British themselves did. In the foreword to “The Best of Punch Cartoons,” a coffee-table-size anthology edited by Helen Walasek, he writes that Punch is still “a national treasure.”


The problem with national treasures, though, is that they’re seldom very funny. What ultimately did Punch in was probably the success of the satiric magazine Private Eye (which also helped inspire Spy in this country). It was younger, snarkier, more topical and original and a whole lot more fun.

But Punch had for years been running on fumes, except for the cartoons, which got better, oddly, as the rest of the magazine slipped into a kind of genteel, un-funny mediocrity. Circulation began to decline in the ’50s, after a postwar peak, and yet as you leaf through this big anthology, which is arranged more or less chronologically, you can’t help noticing that that’s also when the cartoons start to come alive and get looser, freer, funnier. The written humor — the light verse and comic essays that had so long been a Punch staple — beganto become ossified, and it’s as if the artists, seeing the editors and writers nodding off in their club chairs,decided they would carry the show by themselves.

Read straight through, from front to back, “The Best of Punch Cartoons” is more instructive than it is amusing. In some ways it’s a study in the evolution of the cartoon itself. The earliest examples in the book, dating back to the mid-19th century, mostly aspire to the condition of book illustration. They’re fussy, detailed woodcuts reminiscent of Cruikshank, say, or Tenniel. The best of these early artists was Charles Keene, whose cross-hatched drawings, subtly shaded, were admired both by Degas and by Whistler, who thought Keene the greatest English artist since Hogarth. Hogarth was funnier. Keene had no ear for a joke, but he was only slightly more tone deaf than many of his contemporaries. Cartoon captions in those days tended to be written in dialogue form (“Diner: ‘Thompson, do the members ask for this wine?’ Head waiter (sotto voce): ‘Not twice, sir!’ ”), and by today’s standard they were often astonishingly wordy. Thackeray, who drew (quite skillfully) as well as wrote for Punch, has one here that goes on for a couple of paragraphs.

The jokes, such as they were, were almost always in the writing, not the drawing, and a great many involved clubs and waiters, servants, clerks, bishops and vicars. One of the most famous early cartoons coined the term “curate’s egg.” It shows a humble young clergyman dining at a bishop’s table and assuring his lordship, who apologizes for serving him a bad egg, that “parts of it are excellent.”That’s what passed for a yuck in 1895. There were also a lot of cartoons making fun of yokels and lower-class accents: “Hairdresser: ‘Oh! I see you don’t hunderstand me, sir. I don’t mean the ’air of the ’ed, but the hair hof the hatomsphere!’ ”

The realistic, illustrational style of drawing, along with unfunny captions, persisted in Punch for a remarkably long time, until well into the 1940s, as the menu of subjects grew to include cricket, debutantes and society matrons, motorcars and the military. A recurring feature was “The British Character,” drawn by Graham Laidler, or Pont as he signed his work, one of the better artists of the prewar period. It fondly depicted archetypal British traits like dullness, patience in standing in queues, and enthusiasm for gardening and detective fiction. For most of Punch’s history, in fact, the magazine’s great theme was Englishness itself — or English middle-classness — which it celebrated and even helped preserve while seeming to poke fun.

Punch never entirely lost this fixation, but in the second half of the 20th century the cartoons shed their representational literalness and embraced a wider range of themes, many of them the old cartoonish standbys: cavemen, desert islands, angels, bars and bartenders, couples in bed. Where movie comedy began with gags and shticks — with tramps and racing policemen and guys dangling from clock faces — and moved toward more and more realism, ending up with the sitcom, the cartoons in Punch began with the sitcom, with the servants and the masters and the tuxedoed gents in their painstakingly drawn clubrooms, and moved more and more in the direction of gags and variations on ancient comic themes. The drawings got simpler, sparer, less “English” and more universal.

There also appears to have been an infusion of talent and influence from this side of the Atlantic and especially from The New Yorker, which after its founding in 1925 very quickly outstripped Punch as a showcase for first-rate cartooning. In her introduction, Helen Walasek favorably compares the cartoons in Punch with what she calls “the careful blandness of The New Yorker’s,” which to this old New Yorker alumnus suggests that she couldn’t have been reading the American magazine very carefully. Or her own either. The latter part of this anthology is filled with cartoons by artists who also drew for The New Yorker, among them Chon Day, Joseph Mirachi, J. B. Handelsman (who went by the name Bud when drawing for Punch), Henry Martin and Charles Barsotti. Considering that The New Yorker paid better in many cases, it’s likely that not a few of these drawings were New Yorker rejects.

Punch failed, moreover, to produce anyone on the order of a Saul Steinberg, a Peter Arno, a Charles Addams — an artist who raised cartooning to something approximating fine art. The closest it came, on the evidence of these pages, is Ronald Searle, who also drew for The New Yorker, it should be pointed out. His cartoons, like his caricatures, have a wit and spontaneity that are almost startling. A captionless Searle drawing of two grumpy, top-hatted gents — off-duty undertakers — disapprovingly reading a copy of Life magazine is one of several cartoons on the jacket of “The Best of Punch Cartoons,” and it catches your eye immediately.

Walasek’s judgment is otherwise unimpeachable. Her book suffers visually from trying to cram too many drawings on a page, and she made her selections, one suspects, with an eye more toward comprehensiveness than strict laugh value. But perhaps that’s as it should be. “The Best of Punch Cartoons” is as much a document of social history as it is a cartoon album, and it’s hard to read this big book without a twinge of nostalgia for a bygone era — if you’re an American, for a time when the English were more English and not quite so much like us. Even those ponderous, labored Victorian cartoons have their charm, for probably no one will ever again take being funny quite this seriously.

Charles McGrath, formerly the editor of the Book Review, is a writer at large for The Times.