Writers Between the Covers: The Scandalous Romantic Lives of Legendary Literary Casanovas, Coquettes, and Cads by Shannon McKenna Schmidt and Joni Rendon

Writers Between the Covers: The Scandalous Romantic Lives of Legendary Literary Casanovas, Coquettes, and Cads
by Shannon McKenna Schmidt and Joni Rendon
Reviewed by Bronwyn Miller on November 1, 2013 / http://www.bookreporter.com/reviews/writers-between-the-covers-the-scandalous-romantic-lives-of-legendary-literary-casanovas-coquettes-and-cads

Virginia Woolf once said: “Every secret of a writer’s soul, every experience of his life, every quality of his mind, is written large in his works.” Well, one might argue, it’s written even larger in their lives. Most fans of fiction remember what Emma Bovary got up to in that carriage, or what drunken debauchery Hemingway’s characters took part in. But did you ever wonder where the creators behind these great works of fiction got their inspiration?

Wonder no more. Finally, we know exactly what happened to Agatha Christie during her mysterious disappearance in 1926, which prompted a nationwide manhunt. We have the answers to questions like: Why did Marilyn Monroe compare meeting Arthur Miller to “running into a tree”? Did Norman Mailer really stab his second wife at an all-night party? (And why the heck did she go back to him, however briefly?) Was Zelda Fitzgerald as crazy as literary legend would have you believe? These are just a few of the questions that get answered in this unputdownable volume of literary scandals and chagrins. The writers and stories are broken down into seven sections, each highlighting the scandalous love lives behind the writers in question, and punctuated by short sidebars with fun factoids about each topic.

Lord Byron was the closest thing to a rock star his age had seen. Dubbed “Mad, bad, and dangerous to know” by one conquest, with all his bed-hopping and carousing, one might wonder how he had time to write at all. The Times called him “the most remarkable Englishman of his generation,” but it wasn’t just his literary prowess that was remarkable. He was the classic “love ‘em and leave ‘em” lothario, quickly getting bored and moving on to his next conquest. After an ill-fated marriage, rumors of incest (with a half-sister) and homosexuality (a fondness for young boys) began to surface, making him persona-non-grata in London. He fled to Europe, never to return again.

Never was the battle of the sexes more clearly illustrated than with the long-standing relationship between Jean-Paul Sartre and Simone de Beauvoir. The woman who once declared that “love for the woman is total abdication for the benefit of a master” decided to rewrite the rules when it came to her love life. Considering herself a feminist and feeling that marriage, for a woman, was “drawing the short straw,” she repeatedly turned down Sartre’s marriage proposals in favor of a more open relationship. They would remain devoted to each other but were also free to see other people, with the caveat that they would tell each other everything, never lie, and share every detail of their extracurricular activities.

This arrangement fostered a competitive environment between the two intellectuals when they both began vying for the affections of one of de Beauvoir’s young female students: “No matter how progressive de Beauvoir thought herself when it came to relationships, the green-eyed monster once again had her in its grip when faced with Sartre’s unabated desire for another woman. Working through her conflicted feelings, she used the love triangle as the basis for her first novel, SHE CAME TO STAY.” Despite their unorthodox situation, she remained devoted to Sartre until his death.

But it’s not all predilections and wanton sexuality. Many writers used their art as a means of working out the difficulties they could not in life. Tennessee Williams believed his writing was an absolute necessity, claiming “his craft was his way of coping with, and keeping in check, his vast emotional issues. According to Gore Vidal, the playwright ‘could not possess his own life until he had written about it.’” So much so that he devoted most of his memoir to his personal life instead of his professional one, stating, “I could devote this whole book to a discussion of the art of drama, but wouldn’t that be a bore?” Through his plays, he challenged his audiences to open their eyes to real issues like drugs, alcoholism, homosexuality, rape, sexuality in general, and mental illness. Virginia Woolf fans owe a great debt to her devoted husband, Leonard, who took tender care of his fragile wife, keeping her from “heeding the call of the river Ouse” as long as he could.

More often than not, the stormiest of relationships produced the best art. Just look at Hemingway, Fitzgerald, Flaubert, Mailer and the Beats. Competition between writers (Hemingway and Gellhorn, Fitzgerald and Zelda, Anais Nin and Henry Miller) often spurred on some of the greatest works of literature. In some instances, as in the case of F. Scott and Zelda Fitzgerald, this competition proved fatal. When his wife’s literary ambitions threatened his own, Scott did whatever he could to quash her attempts: “He became more enraged when he learned that Zelda had sent her novel to his editor, who wanted to publish it. Along with demanding that half the royalties be applied to debts he owed the publisher, Scott took a heavy hand in editing the story, including reworking the portrayal of the fictional husband (based on him) to make him more sympathetic.” One must never forget that often with great talent comes great ego.

Shannon McKenna Schmidt and Joni Rendon, authors of NOVEL DESTINATIONS: Literary Landmarks from Jane Austen’s Bath to Ernest Hemingway’s Key West, have more than succeeded in bestowing readers with a compulsively readable, juicy assemblage of scandalous true-life tales that sheds light on some of the great works of literature, and the behavior that inspired it. WRITERS BETWEEN THE COVERS is not just for English majors; it’s for anyone who loves the written word, those who create them, and those who want to know the hidden inspiration behind their favorite novels. (Isn’t that everyone?) It also makes a terrific gift for that hard-to-buy-for book lover on your holiday list, or an interesting change-of-pace selection for your book club, guaranteed to give you hours of scintillating discussion. 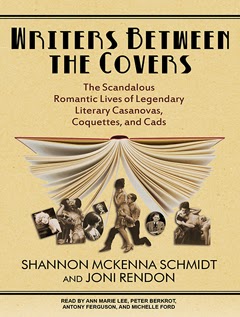