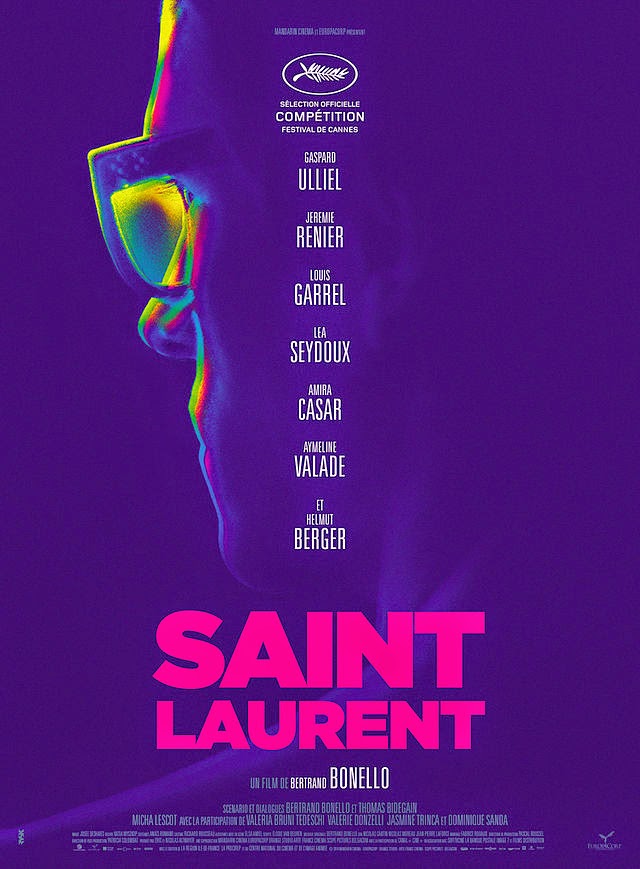 is a 2014 French biography drama film co-written and directed by Bertrand Bonello, and starring Gaspard Ulliel as Yves Saint Laurent, Jérémie Renier as Pierre Bergé and Louis Garrel as Jacques de Bascher. The supporting cast features Léa Seydoux, Amira Casar, Aymeline Valade and Helmut Berger. The film centers on 's life from 1967 to 1976, during which time the famed fashion designer was at the peak of his career.The film competed for the Palme d'Or in the main competition section at the 2014 Cannes Film Festival and was released in theatres on 24 September 2014.
It has been selected as the French entry for the Best Foreign Language Film at the 87th Academy

The 'unofficial' YSL biopic – watch the new trailer
The trailer for the second, 'unofficial' Yves Saint Laurent biopic has been released. Here are five things we've learned from it
Posted by
Lauren Cochrane
Wednesday 23 July 2014 / http://www.theguardian.com/fashion/fashion-blog/2014/jul/23/unofficial-yves-saint-laurent-biopic-watch-new-trailer

The trailer for the second Yves Saint Laurent biopic – simply titled – has been released. Unlike the first film, this one's unofficial and, even though it's in French and our language skills are limited, it seems decidedly more dramatic than the first. Here is what we learned when we watched it.

Alicia Drake’s The Beautiful Fall was a set text

The 2006 book was a romp through 1970s fashion in Paris, telling all on , friend and rival Karl Lagerfeld and other friends. Anyone who has read it (and no doubt everyone on set did) will recognise a cast of characters including Jacques de Bascher (lover of and Lagerfeld), Betty Catroux and Loulou de la Falaise.

is played by Gaspard Ulliel, who starred in a Chanel ad in 2010, while Prada campaign girl Léa Seydoux is De la Falaise and model Aymeline Valade is Catroux. How appropriate.

You don’t need access to archives for fabulous clothes

’s partner, Pierre Bergé, sanctioned use of clothes from the archives for March’s official biopic. This one still manages to reference the Russian collection, "le smoking" and the controversial 40s collection. And that’s just in the trailer.

Going out in 70s looks like the most fun ever

If the official biopic focused on ’s work, there’s a bit more of the play here, judging by the trailer. It’s only right. Going on Drake, the designer’s extra-curricular activities – out all night at Le Sept, long languid holidays in , that affair with de Bascher – were high drama just asking for celluloid.

Snakes are a thing

They appear slithering across notebooks and on Ulliel’s lap at one point. We have no idea what this means, but it looks pretty great. 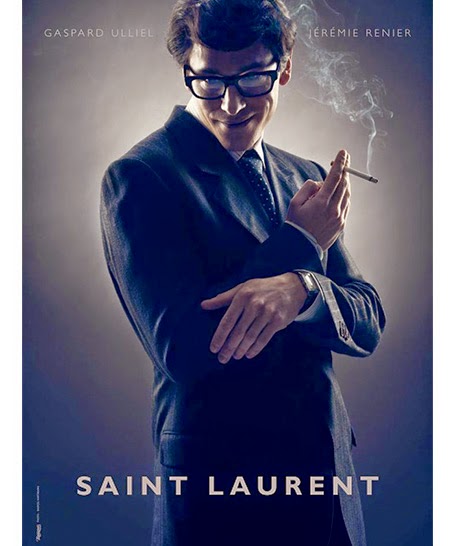 Cannes 2014 review: - a smirking deification
2 / 5 stars
This second biopic of the fashion designer in as many years is cut from the same cloth as the first: swooning, self-absorbed and strangely lacking in any wider interest in society
Peter Bradshaw
Saturday 17 May 2014 / http://www.theguardian.com/film/2014/may/17/saint-laurent-cannes-2014

Bertrand Bonello's is a celebratory and swooningly submissive tribute to the fashion designer Yves Saint Laurent. It is hugely narcissistic, colossally long - and for all its apparently feminised sensibility and solemn talk of 's pioneering sympathy with women, it is as macho and phallus-worshipping as any Schwarzenegger action movie. This butterfly doesn't get broken on any wheel - it smashes the wheel to pieces.

It is in fact arguably superior to a recent, similar movie on the same subject - Jalil Lespert's Yves Saint Laurent - which contrived to look like a YSL corporate in-house video. This film is handsomely designed and photographed and does take a keener look at Saint Laurent's desperate loneliness and his shallow, jaded pleasures, although it is no less forgiving, no less respectful, no less convinced of Saint Laurent's importance as a popular artist, and really no better at persuading the non-fashionista laity, which I confess includes me.

is played by Gaspard Ulliel: far more thrustingly sexy than Pierre Niney's boy aesthete in the previous movie. Jeremie Renier is his lover and business partner, Pierre Bergé, the man who cosseted and protected the creative man himself while shrewdly building the corporate brand. He forgave his lover's adventures with drugs and boys, perhaps because Bergé suspected that these fleeting moments of sensuality were somehow connected to 's inspiration at the drawing board and his mastery of fashion's ephemeral art.
This skittering, hectic world is interrupted by immense stretches of exquisite ennui - languor and longueur combined. is surrounded by an entourage of hangers-on, lovers and admirers, all of whom appear to have the same cynical smirk. They are often to be seen draped around couches, rugs, nightclub banquettes - smoking and smirking, drenched in sophisticated decadence and self-congratulation. Sometimes they and himself are shown waking from the previous night's debauch, and their bleary demeanour doesn't change much. Almost everyone has a lit cigarette in the mouth - perfectly plausible for the 60s and 70s. One assistant, Loulou (Lea Seydoux) even fixes a model's collar with a cigarette on the go, surely putting her at risk of getting fag-ash down the back of the neck.

In the atelier itself, during the day, is coolly authoritative. He inspects a model's outfit and muses: "We could raise the crotch to avoid whiskering. Or we could play on the whiskering." His staff are serious, soberly professional, dressed in white jackets like dentists or lab assistants - and not outrageously obnoxious like Saint Laurent's associates of the night, who are given to pouring out champagne pyramid-towers, like George Best. But are the jet-setting party animals supposed to be obnoxious? We are invited to compare them to the figures that populated Proust's belle époque. Well - maybe. Visconti had his Damned. Perhaps these people are supposed to be the Blessed. The point could be to show what it all cost Saint Laurent - and yet it doesn't actually seem to have cost him that much: he grows to a pampered old age, not very conspicuously interested in anyone or anything but his dog. Perhaps it is that they are entirely without affect, like a tableau by Warhol, who writes a fan letter here.

Finally, is a well made but bafflingly airless and claustrophobic film, like being with fashion's very own Tutenkhamen , living and dying inside his own richly appointed tomb - and sentimentally indulged to the last.
Awards.
Publicada por Jeeves em 00:55