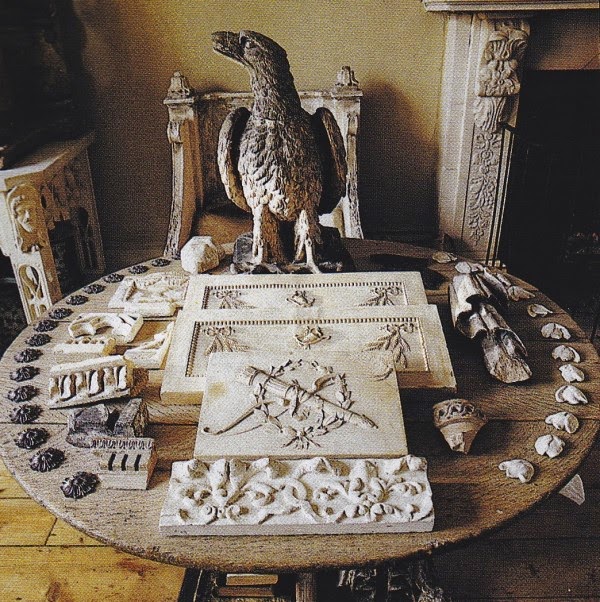 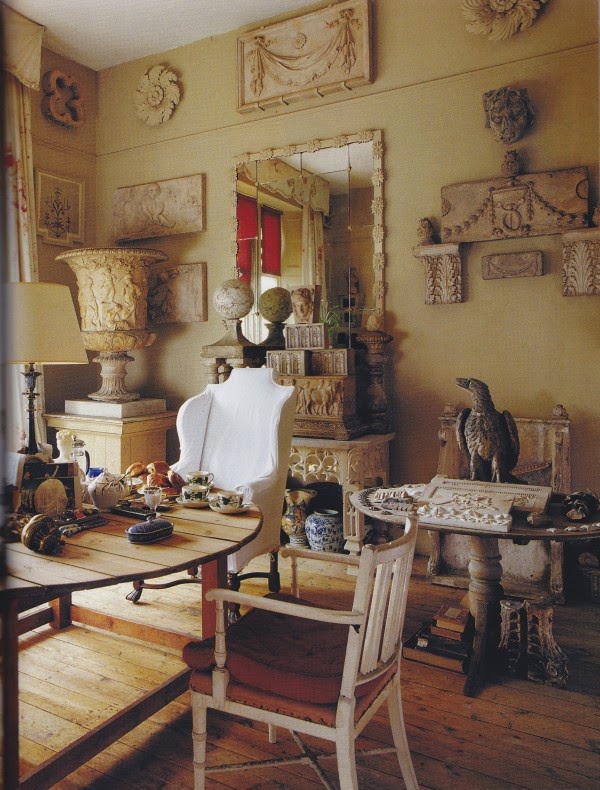 The World of Interiors, September, 1994. 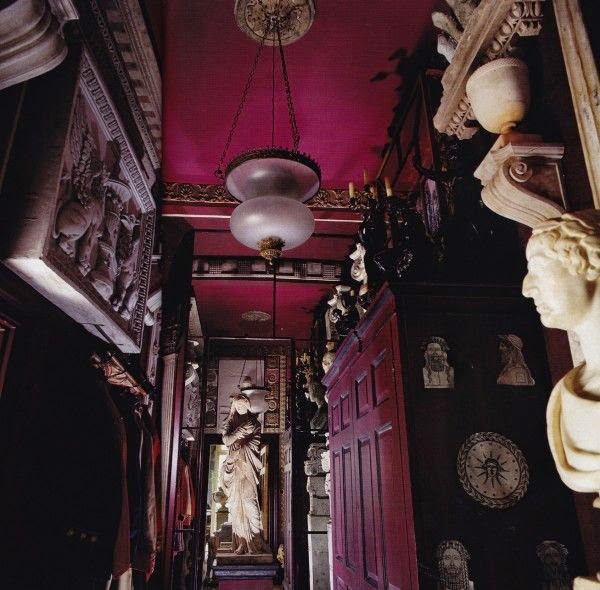 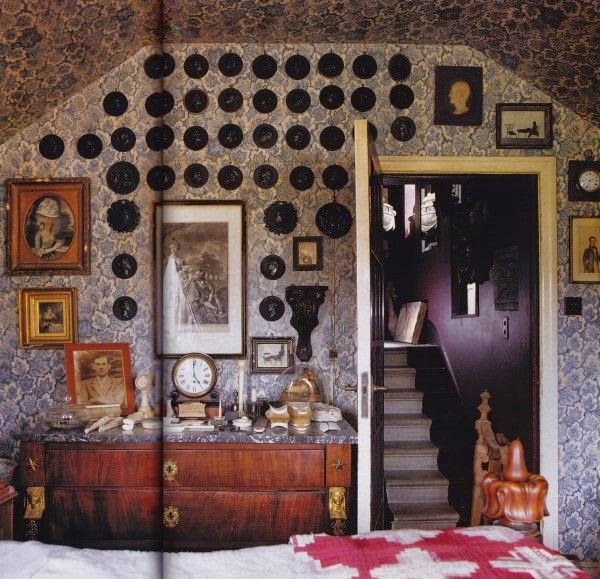 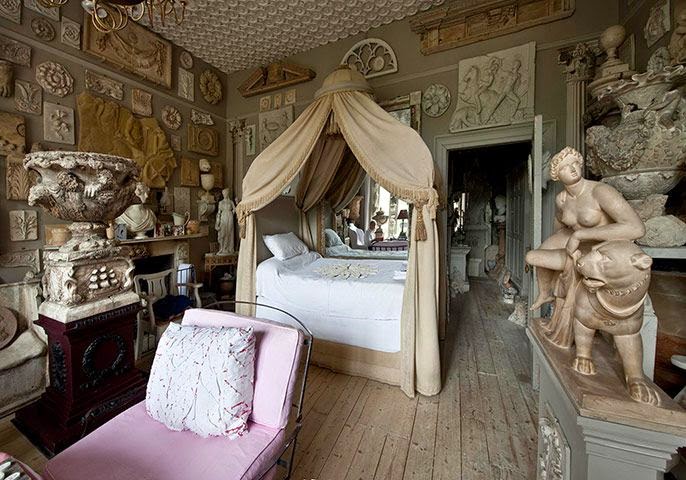 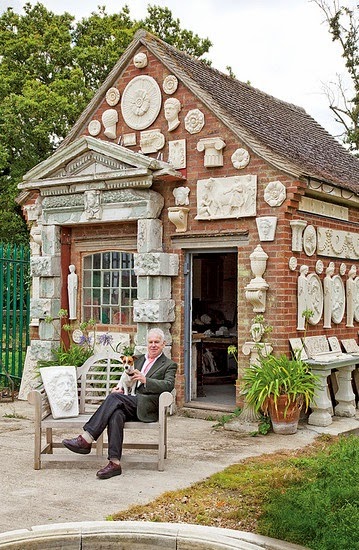 MASTER CASTER | Hone, with his dog, Basil, seated in front of the Hone Exchange at LASSCO gallery's Three Pigeons branch, opened in 2012. 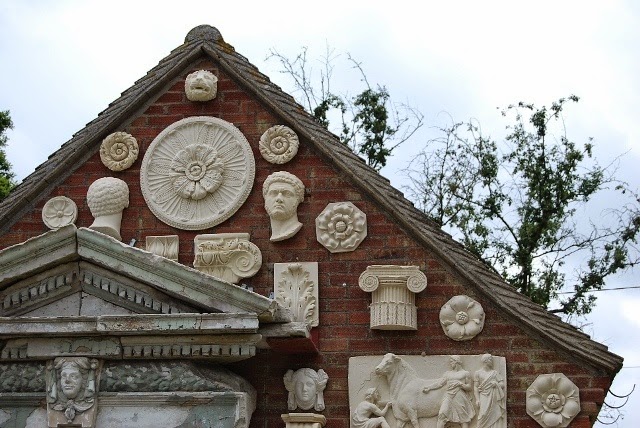 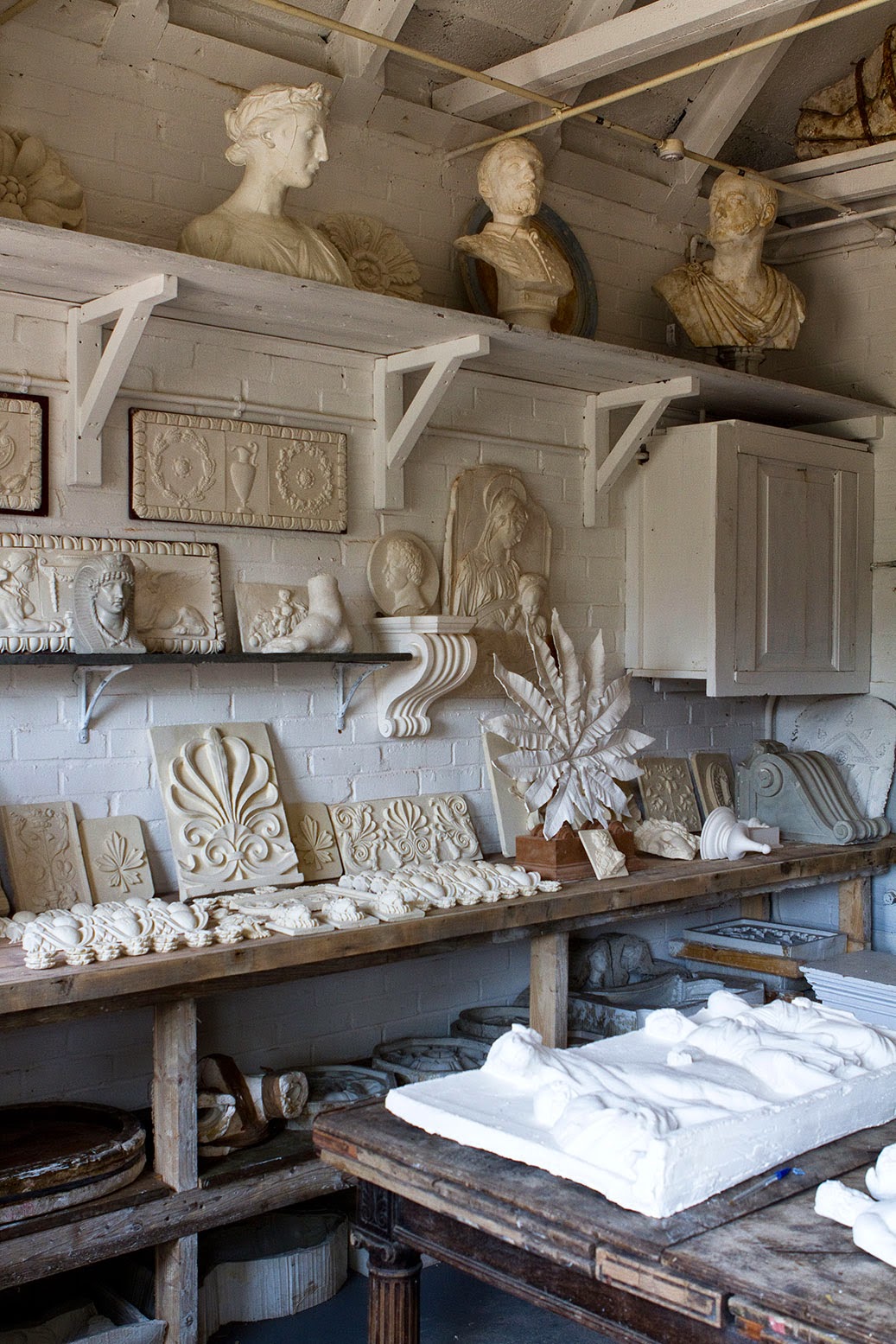 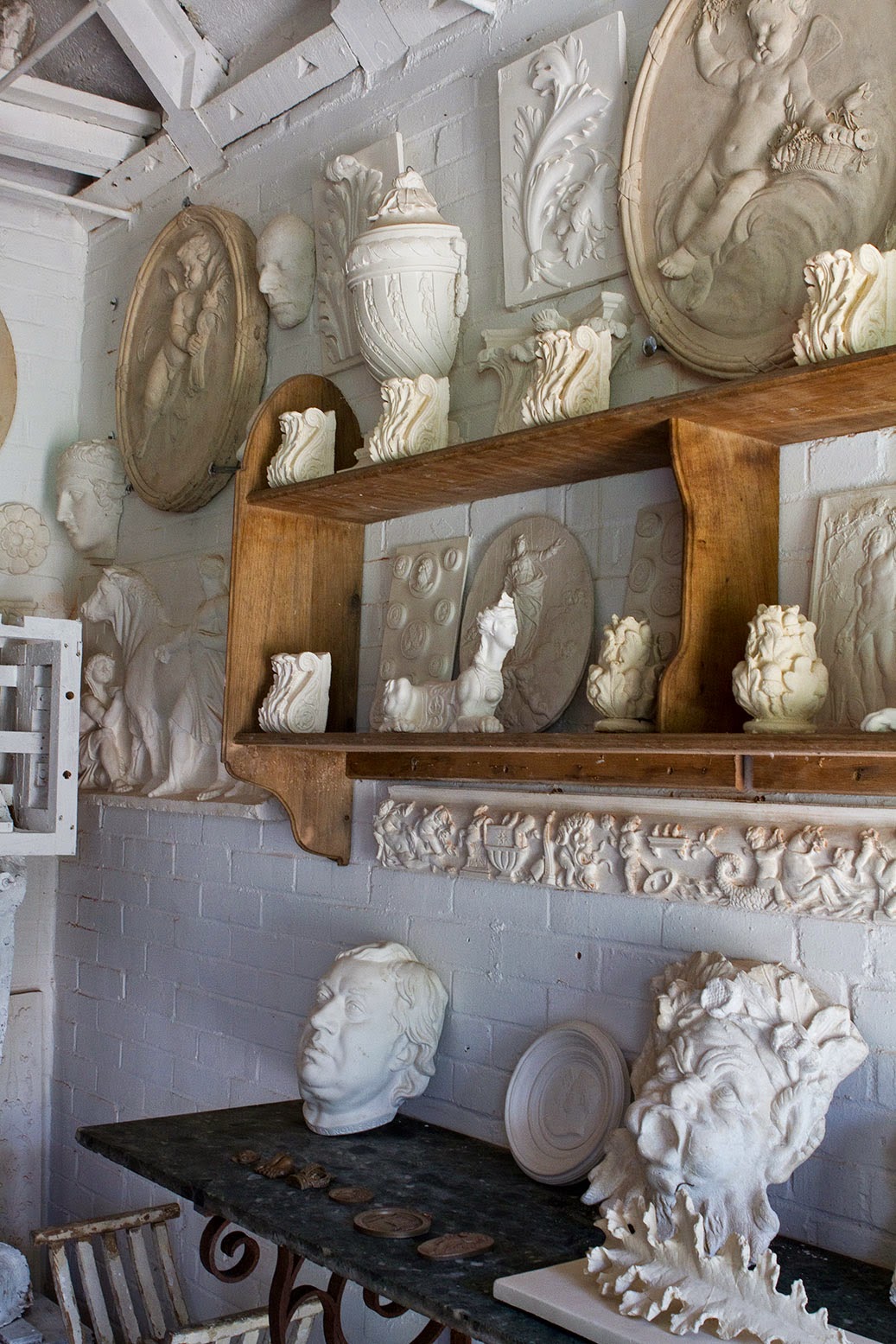 Peter Hone at The Hone Exchange 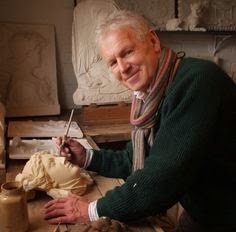 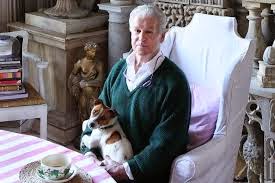 Peter Hone
"ASKING HOW MANY PLASTER CASTS I've made in my life is like asking how many peas one's podded in the pea factory," says Peter Hone, an artist, classical art collector and antiques dealer. "Stand still long enough and you'll be cast!"

Referred to by English interiors buffs as the "Hone museum," Hone's small but decorated-to-the-gills flat in London's Ladbroke Square—which he has occupied for half a century, recently in the company of Basil, his Jack Russell terrier—brims with hundreds of cast-plaster reproductions and the antiquities from his celebrated collection that inspired them. In his living room, Hellenic marble busts and original masks of Keats and Voltaire mingle with casts of keystones from historical building façades. Flower-shaped architectural roundels molded from purple and pink resin—another medium in which Hone likes to work—hang from the windows, catching the late-afternoon sun like stained glass.

A true tweed-clad, dog-hair-covered English eccentric, 74-year-old Hone has resurrected something of a lost art with his work. Making plaster-cast reproductions of important sculptures began in the 16th century and first became popular in the early 19th century, when few people could afford to travel to see the original works. Museums throughout Europe and commissioned plaster and electrotype copies of monuments and sculptures so facsimiles could be exhibited and enjoyed more widely. But the practice fell out of favor in the early 20th century, when plaster reproductions came to be seen as inferior substitutes to original artworks, and many were put into storage or even destroyed.

Hone, however, believes plaster casting is a satisfying art form, not to mention a somewhat irreverent way to enjoy history. "I always liked plaster casts better than the originals," he explains. Gazing at Hone's many lily-white creations—a bust of the Roman goddess Diana; a pair of sphinx figurines modeled on the late 18th-century originals; an 18.5-inch-high cast of a panel from a Roman sarcophagus Hone used to keep on his dining room table—you begin to see his point. While authentic sculpture in one's home can feel, as Hone likes to put it, "a bit in your face and up your nose," his playful casts feel infinitely less serious when placed atop a mantle or mounted on a wall. "They're not expensive and well... they're there!" he says. "It's marvelous."

Born of modest means in , Hone dropped out of school when he was 14. Among other professions, he's been a chef aboard the British Rail ("I wanted to be eating the bloody stuff, not cooking it!") and a custodian at several small museums in ("The uniforms were absolutely beautiful"). In the '60s and '70s, he owned a successful antiques business in specializing in four-poster beds. "I sold beds to i the top people: The Beatles, the Rolling Stones, the aristocracy," he says. In the late '80s he ran a garden and architectural antiques store with the philanthropist and collector Lord Jacob Rothschild, for whom he is also an art consultant. It was in this last incarnation that Hone "Honed in" (as he loves to say) on plaster casting, buying up copious amounts of an outdoor weatherproof material called Coade stone for use in the shop. He now offers many of his casts in this same water-resistant medium, though he's since taken to calling it "Hone stone."

Until recently, his two-story flat had also served as his studio. "I was so overloaded with molds I couldn't get into bed, you see," he says. Hone's friend Anthony Reeve—managing director of the popular London architectural salvage and supply company LASSCO—came to the rescue last spring, offering him a work and show space at Three Pigeons, LASSCO's branch in rural Oxfordshire. There, in a courtyard where rescued gems like old bell-tower wheels and bright-green prison doors are for sale, Hone displays his work in a tiny brick cottage that used to be a telephone repeater station. Acting as a kind of live catalog, the hut, which has been dubbed The Hone Exchange, contains a wide range of his casts, which he can reproduce in about three weeks if they are not already in stock. The shack also contains examples of his newest obsession: glowing plaster sconces and sculptural appliqués made from imprints of giant leaves Hone finds in friends' gardens. Pieces from the Exchange are available to order on the LASSCO Web site. This latest surge of exposure is sure to make Hone's revitalized relics accessible not only to a privileged few but, as plaster casts were originally meant, to everyone. 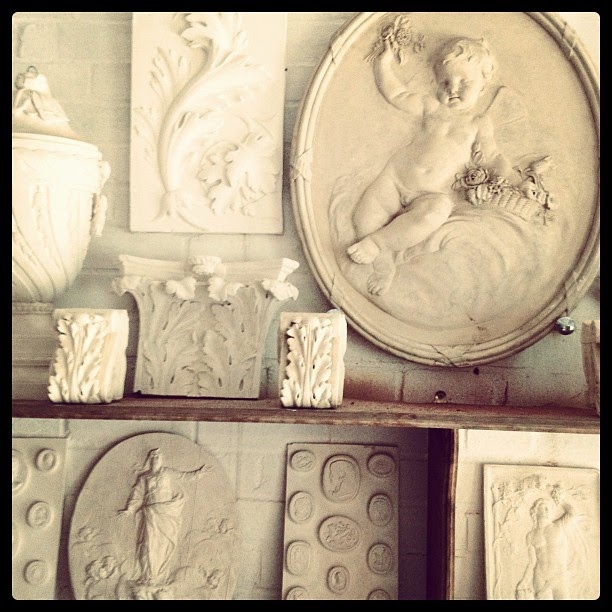