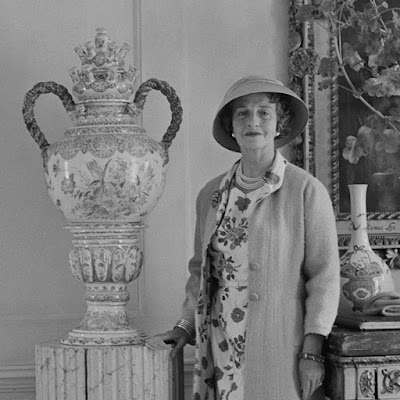 Lady Colefax began decorating in 1930. She was well-connected and also ahead of her time: her circle of friends and acquaintances provided her with clients and she became a very successful businesswoman. British diplomat Harold Nicholson wrote in his diary: ‘Lunch with Sibyl Colefax at Boulestin. She tells me that she has made £2,000 last year by her own efforts. She gets up by candle-light and fusses till midnight. A brave woman’.

Sibyl’s talent for creating comfortable interiors that were stylish but never pretentious was the secret of her appeal to her influential clients. She was friendly with royalty, including the Duke of Windsor and Wallis Simpson, with entertainers such as Charlie Chaplin and Cole Porter, and with much of the British aristocracy. When, in 1938, her services were so in demand that she needed to expand, she asked a rising young star of interior decorating, John Fowler, to join her in her business at Bruton Street in Mayfair. In 1939, the company name was changed to Sibyl Colefax & John Fowler.
https://www.sibylcolefax.com/our-history/1930s/ 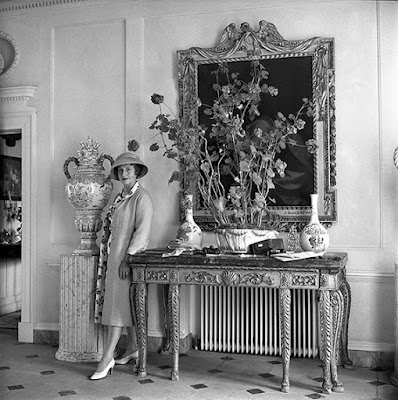 Sibyl, Lady Colefax (née Halsey; 1874 – 22 September 1950) was a notable English interior decorator and socialite in the first half of the twentieth century.

She was born in Wimbledon into a noted family in society and lived in Cawnpore, India, until the age of 20 when she went on the Grand Tour. In 1901, she married patent lawyer Sir Arthur Colefax, who was briefly the MP for Manchester South West in 1910. They set up home at Argyll House, King's Road, Chelsea and at Old Buckhurst in Kent. Widely admired for her taste after she had lost most of her fortune in the Wall Street Crash she began to decorate professionally, using her formidable address book for contacts. She was able to purchase the decorating division of the antique dealers Stair and Andrew of Bruton Street, Mayfair and established Sibyl Colefax Ltd in partnership with Peggy Ward, the Countess Munster. On her 'retirement' (following a family tragedy) Peggy Ward advised her to take on John Fowler (1906-1977) as her partner, which she did in April 1938. The advent of war cut short this partnership. During the Second World War, she organised a soup kitchen and continued to entertain. She often held small lunch parties at The Dorchester known as 'Ordinaries' after which the guest would receive a small bill.

In 1944 the business, managed by John Fowler, took a lease on 39 Brook Street, Mayfair where it remains to this day. Also in 1944 Sibyl Colefax sold the business to Nancy Tree (Nancy Lancaster as she became in 1948) for a sum in the order of £10000. She renamed the business Sibyl Colefax and John Fowler Ltd, the name continuing today as the decorating division of the Colefax Group Plc.

Sibyl Colefax died at her home in Lord North Street, Westminster on 22 September 1950. Harold Nicolson penned an affectionate tribute that appeared shortly after in The Listener. 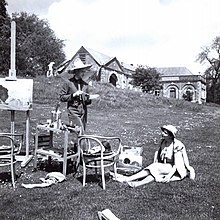 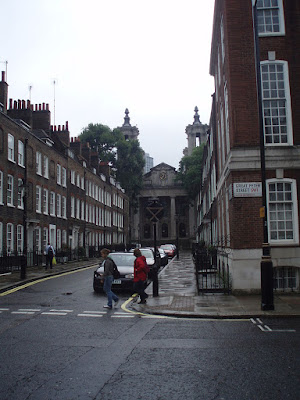 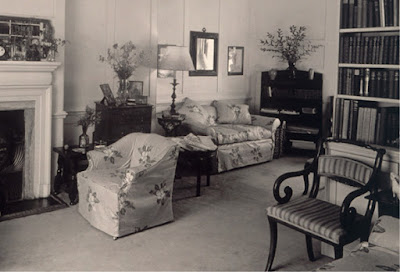 Lord North Street is a short street of Georgian terraced housing running between Smith Square and Great Peter Street in Westminster, the political heartland of British government. As such they have always commanded high fees and featured in many dramatic storylines.Past residents include the socialite Sibyl Colefax, founder of the Colefax and Fowler fabrics and wallpaper company,and Harold Wilson, twice Prime minister who in November 1974 alleged that renegade MI5 operatives had broken into his home.More recent residents include Jonathan Aitken and Theresa Gorman. The street is named after the 2nd Earl of Guilford, who was known for most of his life under his courtesy title Lord North, and was Prime Minister from 1770 to 1782. 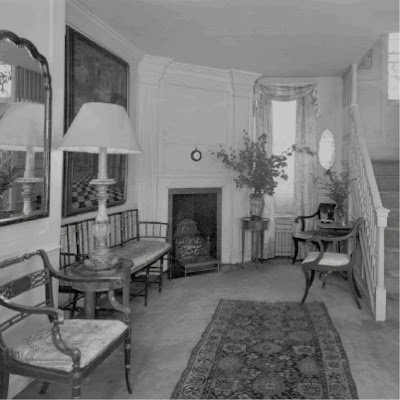 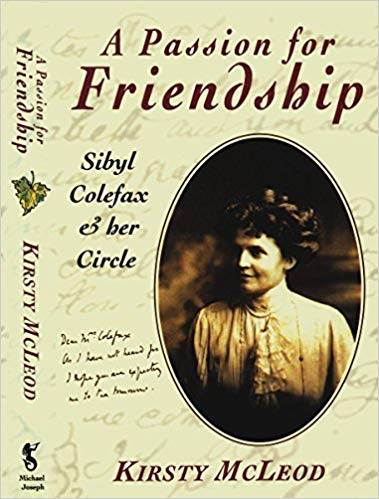 A Passion for Friendship by Kirsty McLeod. Michael Joseph, London, 1991.


Sibyl Colefax (1874-1950) was a society hostess of 1930s London; remembered, too, as the founder of the interior design company, Colefax and Fowler. This is a portrait of her life and her association with the personalities she brought together. This book explores Sibyl's friendships - with Harold Nicolson, Diana Cooper, the Windsors, Cole Porter, Noel Coward, Max Beerbohm, Aldous Huxley, Evelyn Waugh, Virginia Woolf, Vita Sackville-West, Bernard Berenson, Thornton Wilder and many others - providing a view of the celebrities of the period. She also analyzes Sibyl's unique nature that drew her to them: though some criticized her for "collecting" famous names, others found behind the relentlessly social personality a genuine and loyal friend, full of kindness and love of life. The author also wrote "The Wives of Downing Street", "Drums and Trumpets" and "The Last Summer". 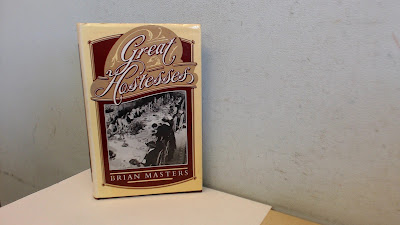 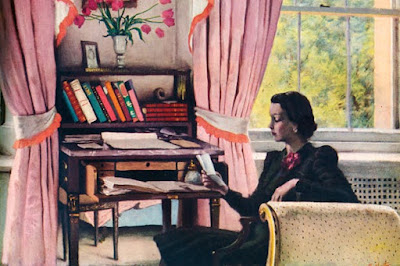 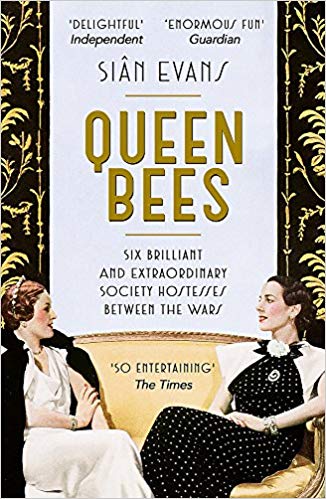 In 1931, Nancy Astor, owner of one of the most expensive houses in England, accompanied George Bernard Shaw to the Soviet Union. Armed with enough tinned food for two weeks, she embarked on the trip with the entitled confidence of the English aristocracy, though she was an American by birth. “When will you stop killing people?” she asked Stalin, who’d granted her a two-hour interview. “We are living in a state of war,” he replied. “When peace comes we shall stop it.”

With sufficient wealth and privilege, English women could be anywhere and talk to anyone. Siân Evans’s new book is an account of six English hostesses (three originally American and one Scottish) who flourished in the interwar years. Nancy Astor, Mrs Laura Corrigan, Sibyl, Lady Colefax, Lady Emerald Cunard, Lady Londonderry and Mrs Margaret Greville all lived in houses that are difficult to conceive of as domestic residences now, when most of them are owned by the National Trust. The grandest was Cliveden, the Astors’ Buckinghamshire home, where at the end of Nancy’s life the Profumo affair began.

Evans is too anxious to defend her subjects to scrutinise their place in history
For Evans, this is more than an escapist tale of privilege. She claims both that “to be a great hostess was a career choice for those resourceful and energetic women” and that her six “queen bees” had “profound effects on British history”. Neither claim is convincing. Being a great hostess is not a career choice and it demeans the pioneering women who did manage to have jobs in this period to call it one. Indeed, some of these hostesses also had careers, which took up more time than their hostessing.

When her husband inherited a title and was debarred from his political seat in 1919, Nancy Astor stood for election. As the first female MP to take her seat, she managed to weather male disapprobation and to influence the law, pushing through an act in 1923 banning the sale of alcohol to those under 18. “When you took your seat, I felt as if a woman had come into my bathroom and I had only a sponge with which to defend myself,” Churchill complained. “You are not handsome enough to have worries of that kind,” Astor retorted. Meanwhile, Sibyl Colefax set up a successful interior-decorating business, starting her 12-hour days at 7am so that she could finish in time for the daily round of drinks and dinner, changing her clothes in the back of her chauffeur-driven Rolls on the way.

Did these women have much influence as hostesses? Certainly between them they managed to entice most of the social, political and artistic elite to their competing salons. But ultimately, this was a series of parties. Reminiscing about Emerald Cunard, Oswald Mosley looked back on her house as a place where “the cleverest met with the most beautiful and that is what social life should be”. No doubt it was all “enormous fun”, as he recalled, but surely Astor had more influence as an MP than she did at home. The suggestion that they influenced art also seems overstated. Though their houses were popular, they were not especially respected by serious writers and artists. Mocking Colefax, Virginia Woolf coined the term “Colefaxismus” for casual remarks intended to imply privileged knowledge of a subject. Emerald Cunard’s influence in the opera scene was acquired chiefly as a result of the financial support she gave her lover, the conductor Thomas Beecham. But this was an increasingly humiliating affair with a serially unfaithful man.

Most of them lost face in the lead up to the second world war, when all but one were sympathetic to Hitler. The Londonderrys made their final visit to Germany in June 1938 and insisted afterwards that Britain should “extend the hand of true friendship to the Third Reich” for the sake of world peace. The hostesses did their best to regain prestige by aiding the war effort and some were impressive in their sacrifices and achievements. Laura Corrigan remained in Paris once it was overrun by Nazis, managing to sell her jewellery to Goering in order to support wounded soldiers in France.

There are important historical questions to be asked here, but Evans is too anxious to defend her subjects to scrutinise their place in history. She also doesn’t seem especially interested in analysing her cast as individuals. The portraits are done with a broad brush and I found that I didn’t know these women intimately enough to care what happened to them and was frequently inclined to agree with Harold Nicolson, complaining that “the harm which these silly, selfish hostesses do is immense”. Nicolson didn’t turn down their invitations, though, and I didn’t stop reading about them. Insofar as it’s always pleasurable to read about the quirks and feats of eccentric and redoubtable women, the book, like their parties, is often “enormous fun”.

Lara Feigel is the author of The Bitter Taste of Victory: In the Ruins of the Reich. Queen Bees is published by Hodder & Stoughton (£20). Click here to buy it for £16.40