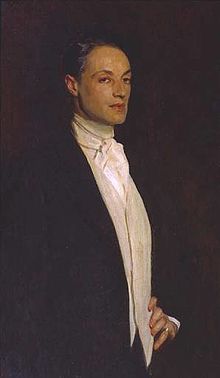 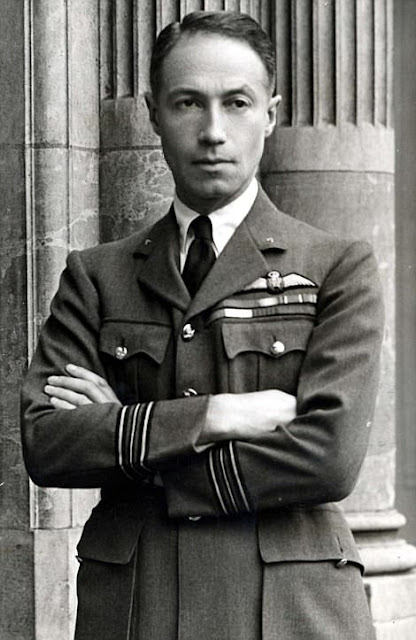 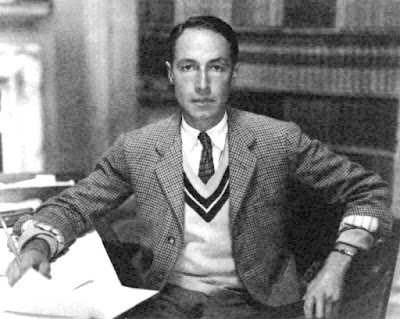 Sassoon was a member of the prominent Jewish Sassoon family and Rothschild family. He was born in his mother's mansion on Avenue de Marigny, Paris. His father was Sir Edward Albert Sassoon, 2nd Baronet, MP, son of Albert Abdullah David Sassoon; his mother was Aline Caroline, daughter of Gustave Samuel de Rothschild. His sister was Sybil Sassoon, who married the Marquess of Cholmondeley. He was a cousin of the war poet Siegfried Sassoon. He was descended from the banking family of Frankfurt. When aged only nineteen years old his great-grandfather, James Rothschild was sent to Paris to set up the family business in France. James became wealthy. When he died in 1868 he was buried in Père Lachaise Cemetery. His branch of the Sassoon-Rothschild family kept the Jewish faith, donated to Jewish charities and founded synagogues.

His great-grandfather David Sassoon had been imprisoned in Baghdad in 1828, and in 1832 he established his business David Sassoon & Co. at Bombay. He took advantage of British rule to return to Baghdad to trade. The family eventually established a Head Office at Leadenhall Street, London and another in Manchester. The Sassoons became assimilated Jews, dressing, acting and thinking like Englishmen. The Sassoon Brothers, David and Albert were friends of the Prince of Wales, built the 'Black Horse' brand. The business came with a baronetcy of Kensington Gore. His father bought Shorncliffe Lodge, where his cousin Mayer Rothschild was the MP. His father was not a successful backbencher, but the political influences had a profound effect on young Philip.

He was educated at Farnborough Prep school and Eton before going up to Oxford. Old Etonian Arthur Balfour recommended the Debating Society to him. His father was also friendly with Frances Horner, wife of Sir John Horner, a longtime friend of Gladstone who lived at Mells Manor in Somerset. His house master was a member of the secret society of liberals, the Young Apostles. Also a near contemporary was Osbert Sitwell, the Yorkshireman and author. A French scholar, he learned the language doing classes at Windsor Castle. Sassoon was taught aesthetics by Henry Luxmoore giving an insight into philosophy and social realism. However he chose to read Modern History at Christ Church, Oxford. He was one of only 25 Jewish undergraduates, but was invited to join the Bullingdon Club. He joined the East Kent Yeomanry while still at Oxford and was commissioned as a second lieutenant.

Sassoon served as private secretary to Field Marshal Haig during the First World War from 1915-1918. Sassoon was present at the meeting on the First of December 1914 at the Chateau Demont at Merville in France, when King George V and Edward Prince of Wales met with Poincare, President of France, and the Generals Joffre, Foch and Rawlinson. The allies showed their determination to fight Germany and the Central Powers. Because of his "numerous social and political connections" Sassoon, at that time a Second Lieutenant in the Royal East Kent Yeomanry, was in attendance. A square bronze plaque commemorating the occasion was auctioned in 2012.

He was Member of Parliament (MP) for Hythe from 1912, succeeding his father, initially as the "Baby of the House". He was Parliamentary Private Secretary to David Lloyd George in 1920. Between 1924 and 1929 and again from 1931 until 1937 he served as Under-Secretary of State for Air, and gained much prominence in political circles. He was appointed a Privy Councillor in the 1929 Dissolution Honours. In 1937 he became First Commissioner of Works, a post which he held until his death, aged fifty, two years later. 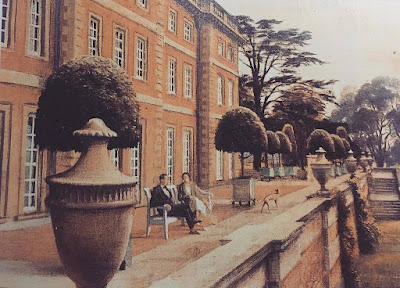 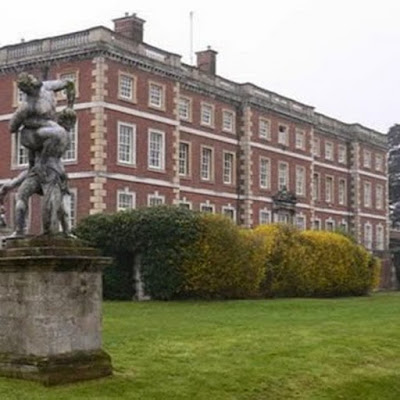 Trent Park
He had a reputation for being one of the greatest hosts in Britain. Herbert Baker designed one house for him in 1912, Port Lympne, later the Port Lympne Wild Animal Park, in Kent, and Philip Tilden largely re-built another at Trent Park, Cockfosters, from 1923. Stylistic differences between the two houses illustrate changes in taste among members of British high society of the period. Trent Park possessed a landscape designed by Humphrey Repton but the existing house was Victorian and undistinguished. Sassoon and his designers turned it into one of the houses of the age, "a dream of another world - the white-coated footmen serving endless courses of rich but delicious food, the Duke of York coming in from golf... Winston Churchill arguing over the teacups with George Bernard Shaw, Lord Balfour dozing in an armchair, Rex Whistler absorbed in his painting... while Philip himself flitted from group to group, an alert, watchful, influential but unobtrusive stage director - all set against a background of mingled luxury, simplicity and informality, brilliantly contrived...’ This atmosphere, as Clive Aslet has suggested, represented a complete about-face from Sassoon's earlier extravagance at Port Lympne to what Aslet called "an appreciation of English reserve." In the words of Christopher Hussey, at Trent Sassoon caught "that indefinable and elusive quality, the spirit of a country house... an essence of cool, flowery, chintzy, elegant, unobtrusive rooms that rises in the mind when we are thinking of country houses." 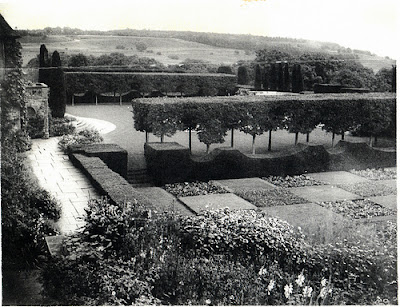 Port Lympne Mansion
Neither the eye-popping interiors nor the extravagant gardens at Port Lympne Mansion could be described as in any way "reserved", or even "English". Mark Girouard has written of the "quiet good taste expected of a country gentleman" against which Philip may have chafed in his younger years, apparently torn between the standards of Country Life and Metro-Goldwyn-Mayer. His Ballets Russes-inspired dining room at Port Lympne with its lapis walls, opalescent ceiling, gilt-winged chairs with jade-green cushions, all surmounted by a frieze of scantily-clad Africans, suggests the outsider confidence of a Rothschild and of an openly gay man. Philip Tilden added a bachelor's wing with Moorish courtyard, which Lady Honor Channon, (wife of Chips), unkindly likened to a Spanish brothel, to accommodate young airmen from nearby Romney Marsh flying field - among his other enthusiasms, Sir Philip was himself an aviator - and Tilden's twin swimming pools and monumentally classical garden staircase were in much the same theatrical spirit.

One frequent guest was Lawrence of Arabia. 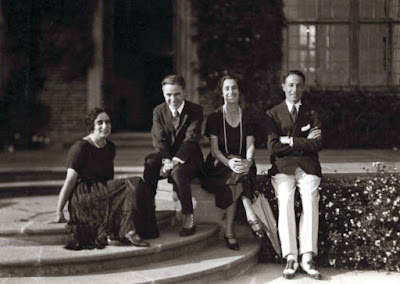 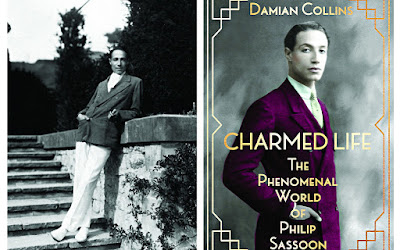 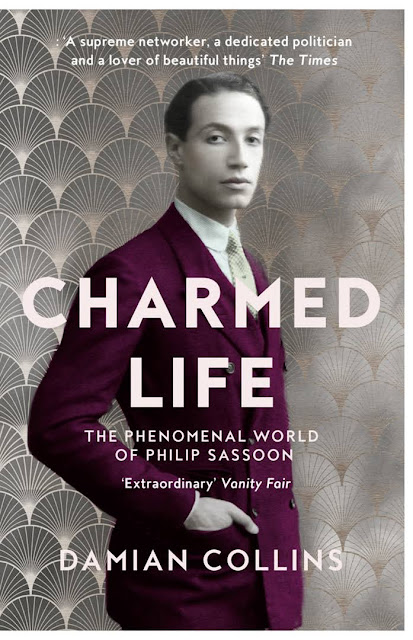 Charmed Life by Damian Collins review – the phenomenal world of Philip Sassoon
The politician, arts patron, aviator and lavish host who called himself a ‘worthless loon’ is brought fluently to life

Sir Philip Sassoon said that he might have been interesting had he slept with Michelangelo’s male muse Cavalieri or invented the wireless instead of Marconi. He would not have felt such “a worthless loon”, he added, if he had painted Velázquez’s court painting Las Meninas or written Wuthering Heights. These hankerings show the essence of the man: a classy aesthete, with a love of big names and modern gadgets.

Despite his self-deprecation, though, Sassoon had a fulfilling life. In 1912, in his early 20s, he inherited a fortune with a baronetcy, and was elected as Conservative MP for Hythe – a constituency that, in the 1920s, his political opponents did not even bother to contest. In 1915 Field Marshal Haig, commander-in-chief of British armies on the western front, selected him as his private secretary. A few years later the prime minister, David Lloyd George, appointed him as his political secretary. He held interesting government posts during most of the interwar years.

Haig quipped that in recruiting Sassoon to his staff, he had attached a first-class dining car to his train. It is as a host with superb French chefs that Sassoon is remembered most. He liked to buy people’s friendships, to receive them in surroundings that he had beautified, and to embellish himself. Even as an Eton boy he gave ruby shirt studs and diamond cufflinks to other pupils. Thereafter he spent his wealth in ceaseless coddling of the English governing classes.

Sassoon’s mother was a Rothschild; he was born in her family’s Paris mansion in 1888. His paternal ancestors had amassed their booty as merchants in boomtown Bombay, trading in silver, gold, silks, opium, spices and cotton. After settling in the UK, the Sassoons ingratiated themselves with the Prince of Wales, afterwards Edward VII. They fed his appetite for advance and confidential news, entertained him in their palatial houses and abetted his gambling sprees.

Max Beerbohm drew a cartoon of Sassoon as a newly elected MP, looking demure and outlandish on the Commons benches among beefy, booming, rubicund Tories. Yet as a politician he soon proved to be a fluke success. He had a faultless memory for facts and figures, and was a businesslike speaker who never needed notes. Although he tried to suppress flamboyance, he nevertheless had, as one Labour MP said, the air of having wafted into parliament on a magic carpet. He was politically ambitious, “as clever as a cartload of monkeys”, and an inveterate flatterer of men in power.

In parliament he was the advocate of aviation. He bought his own aircraft in 1919, and used it in the way that poorer people ran their motor cars. As undersecretary in the air ministry, he promoted civilian air travel, and particularly the routes and airfields that ran from Britain through the Middle East to India. His book The Third Route – a mixture of technical flying manifesto and sprightly, observant travelogue – is as eloquent as anything written by his cousin Siegfried Sassoon (with whom his relations were mutually mistrustful).

The trajectory of Philip’s career was set by his homes. He inherited a sumptuously plutocratic London house, 25 Park Lane. His weekly political luncheons there were called “cabinet lunches”, because ministers came direct from the morning cabinet meetings in Downing Street. The oriental luxuries of the house made Neville Chamberlain compare Sassoon to the Count of Monte Cristo – before appointing him as a minister just below cabinet rank in his government.

In addition, Sassoon built a sybaritic mansion called Port Lympne on a high site in Kent overlooking Romney Marsh and the Channel. It was a unique building, Italianate and Moorish in its influence, built for a voluptuary of the senses who wanted his rooms to be a rapturous medley of strong, exotic colours and filled with the luscious fragrance of flowers. The formal grounds at Port Lympne were like a Hollywood version of Tuscany.

Sassoon transformed his third house, Trent Park, near Cockfosters in north London, from a mauve and black bricked Victorian mansion into a masterpiece of rose-red brick expressing the Palladian calm of the Enlightenment. It resembled the seat of a philosophically minded 18th-century statesman, except for its golf course and airstrip. At Trent, platoons of footmen in red cummerbunds attended the weekend parties for politicians, royalty, sportsmen, authors and artists.

Sassoon shone as a patron of the arts and bought rare objects with discrimination, displaying them with flair. He used his connoisseurship as chairman of the National Gallery, as a trustee of the Tate and as first commissioner of works.

Damian Collins is the Conservative MP for Hythe. He has written an elegant, playful and fluent book about his predecessor. It is widely researched, canny in its political insights, sympathetic but not syrupy about Sassoon’s glamour. Puritans will resent his privileges and cavalier grace, but many readers will enjoy his resilient and dashing brand of razzle-dazzle. 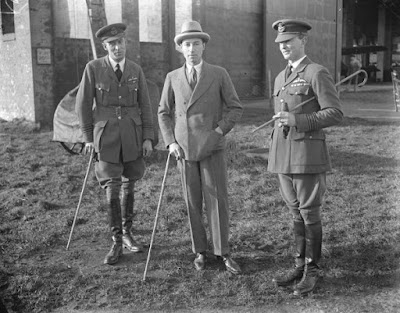 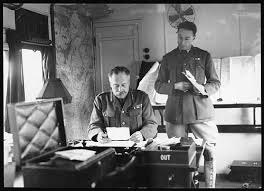