The Dig is a 2021 British drama film directed by Simon Stone, based on the 2007 novel of the same name by John Preston, which reimagines the events of the 1939 excavation of Sutton Hoo. It stars Carey Mulligan, Ralph Fiennes, Lily James, Johnny Flynn, Ben Chaplin, Ken Stott, Archie Barnes, and Monica Dolan. 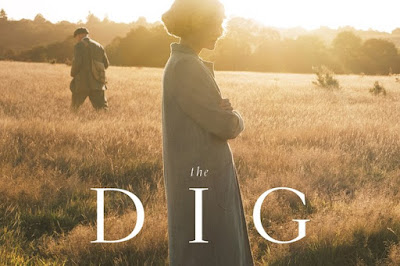 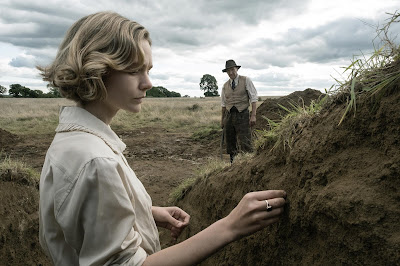 In 1939, Suffolk landowner Edith Pretty hires local self-taught archaeologist-excavator Basil Brown to tackle the large burial mounds at her rural estate in Sutton Hoo. At first, she offers him the same amount of money he received from the Ipswich Museum, about the minimum agricultural wage[2], but he says is inadequate; she ups her offer by 12% to £2 a week (approximately £120 in 2020), which he accepts. His former employers try unsuccessfully to persuade Brown to work on a Roman villa they deem more important. They ignore Brown, who left school aged only 12, when he suggests the mounds could be Anglo-Saxon rather than the more common Viking. 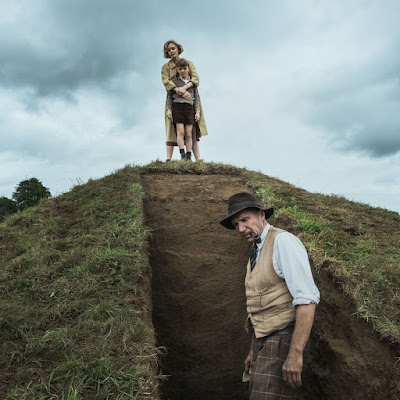 Working with a few assistants from the estate, Brown slowly excavates the more promising of the mounds. One day the dirt collapses on him, but he is dug out in time and revived. Meanwhile, he spends more time with Edith, a widow, and her young son, Robert, and ignores daily letters from his wife, May. Edith struggles with health issues and is warned by her doctor to avoid stress.

Brown is astonished to uncover iron rivets from a ship, which could only make it the burial site of someone of tremendous distinction, such as a king. Prominent local archaeologist James Reid Moir attempts to join the dig but is rebuffed; Edith instead hires her cousin Rory Lomax to join the project. However, news of the discovery soon spreads, and Cambridge archaeologist Charles Phillips arrives, declares the site to be of national importance, and takes over the dig by order of the Office of Works.

As war approaches, Philips brings in a large team, including Peggy Piggott, who uncovers the first distinctly Anglo-Saxon artifact. Brown is retained only to keep the site in order, but Edith intervenes and he resumes digging. Brown discovers a Merovingian tremissis, a small gold coin of Late Antiquity, and Philips declares the site to be of major historical significance. Philips wants to send all the items to the British Museum, but Edith, concerned about the war raids in London, asserts her rights. An inquest confirms she is the owner of the ship and its priceless treasure trove of grave goods, but she despairs as her health continues to decline.

Peggy — who is badly neglected by her husband, Stuart — begins a romance with Rory, but he is soon called up by the Royal Air Force. Edith decides to donate the Sutton Hoo treasure to the British Museum, requesting that Brown be given recognition for his work. She dies in 1942.

A note states that the treasure was hidden in the London Underground during the war and was first exhibited — without any mention of Basil Brown — nine years after Edith's death. Only recently was Brown given full credit for his contribution and his name is now displayed permanently alongside Edith Pretty's at the British Museum. 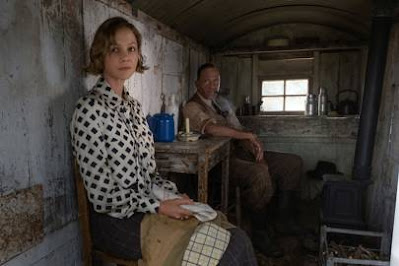 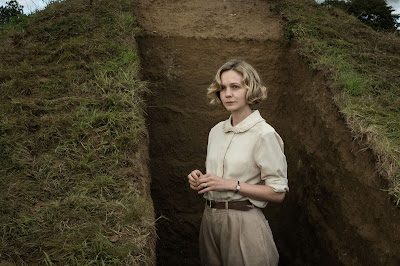 On review aggregator Rotten Tomatoes, the film holds an approval rating of 86% based on 95 reviews, with an average rating of 7.3/10. The website's critics consensus reads, "Featuring beautifully matched performances from Ralph Fiennes and Carey Mulligan set against gorgeously filmed English countryside, The Dig yields period drama treasures." According to Metacritic, which sampled 32 critics and calculated a weighted average score of 73 out of 100, the film received "generally favorable reviews".

Kevin Maher of The Times gave the film 5 out of 5 stars and described it a "serious, intellectually committed, and emotionally piercing cinema. Unmissable." Katie Rife of The A.V. Club gave the film a B- and wrote, "for all the film's sweeping, romantic ideas, the actual experience of watching The Dig is a lot like sitting at a bus stop."

However, Mark Bridge of The Times noted that archaeologists had taken issue with the film's portrayal of Peggy Piggott as inexperienced and only hired because her light weight would not disturb the delicate site. By 1939, Peggy was an experienced archaeologist in her own right, and had studied archaeology at the University of Cambridge and the University of London. She was also presented as married to an older, more experienced male archaeologist, when in reality Stuart was only two years her senior (27 and 29, respectively), and they had met while both students. In addition, Charles Phillips was in his late 30s but is played by Ken Stott in his 60s, and the landowner Edith Pretty was in her mid 50s but is played by Carey Mulligan in her mid 30s (the 53-year-old Nicole Kidman had originally been slated to play Edith).

Bridge also criticised the addition of the fictional Rory Lomax as a love interest for Piggott. The character of Rory, Edith Pretty's cousin, is depicted as the photographer. In reality, Mercie Lack and Barbara Wagstaff (two local school mistresses), and OGS Crawford (the archaeological officer of the Ordnance Survey) separately took series of photographs. Two women who extensively photographed the site were excluded from the book and film in order to create a romantic storyline.

Just watched it. Beautifully shot and a great, elegiac story.