‘The Crown’ Has a New Diana and Charles to Tear Apart 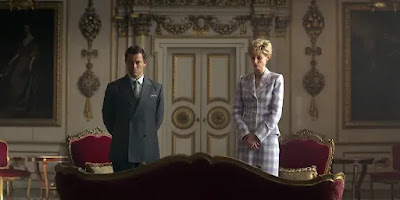 ‘The Crown’ Has a New Diana and Charles to Tear Apart

Season 5 tracks the collapse of the royals’ marriage. In a joint interview, Elizabeth Debicki and Dominic West discuss the challenge of taking on these roles and the scrutiny the show has received since Queen Elizabeth’s death.

Dominic West and Elizabeth Debicki had no illusions about the expectations and challenges they’d face as the latest incarnations of Prince Charles and Princess Diana in “The Crown.”

After all, their predecessors in the roles, Josh O’Connor and Emma Corrin, had each won a Golden Globe and an Emmy for their portrayals in Season 4. And West, 53, and Debicki, 32, were charged with depicting the most precarious chapter of the Charles and Diana story: the painfully public implosion of their royal marriage.

Season 5 of “The Crown,” arriving Wednesday on Netflix, is set during the apex of their marital imbroglio in the early to mid-1990s, when Charles’s affair with Camilla Parker Bowles and Diana’s tell-all with Martin Bashir — which included her complaint that “there were three of us in this marriage” — made for tantalizing tabloid fodder. The show arguably has never recreated events, as imagined by the creator, Peter Morgan, that so many viewers already have strong feelings about.

And then, in early September, the death of Queen Elizabeth II turned up the heat even more, as some of her majesty’s high-profile subjects took aim at the series.

The former prime minister John Major told The Daily Mail that people should boycott the show and said that a scene in the new season, in which his character meets with Charles, who is pushing for the queen’s abdication, was “damaging and malicious fiction.” Judi Dench, writing to The Times of London, called for adding a disclaimer to the start of each episode, adding that Netflix “seems willing to blur the lines between historical accuracy and crude sensationalism.”

“It seems to be upsetting a lot of people,” West said with a nervous laugh in a recent video interview with Debicki.

“If anybody thinks that we don’t feel a tremendous amount of responsibility, then they would be wrong,” Debicki added.

In the interview, West, in England, and Debicki, in Spain, spoke about navigating public opinion, approaching their characters with compassion and why it matters what Diana wore. These are edited excerpts from the conversation.

How difficult has it been acting out a story that the world feels it already knows?

DOMINIC WEST You’re very aware everyone has a strong opinion about what happened and whose side they’re on. It’s a bit of a minefield.

ELIZABETH DEBICKI From an acting perspective, it’s a really interesting exercise because people bring their living memory to this story. I’ve never been a part of anything like that.

Then the queen died while you were both shooting Season 6 in Barcelona. What was your reaction?

DEBICKI It always amazes me how fast history moves, how quickly change happens. It shocks you. We were all very deeply sad, and we paused shooting. And then that beautiful queue started forming, with all those people from such different walks of life and ages and abilities passing that coffin, and it absolutely gutted me.

WEST I remember feeling what an amazing death, what an amazing effect and what an incredible, unique world figure. But also what was interesting was so much of Season 5 is about, “Will Charles become king?” In the ’90s, a lot of people were going, “I don’t think he’s the right guy.” Then it happened, and it was amazing how quickly and instantly everyone accepted him as the new king — and unquestionably. It seemed like so much of the turmoil that we’d represented for Charles, of whether he would ever fulfill his destiny, was answered in those few days.

The new season has already received criticism for some scenes and characterizations. “If anybody thinks that we don’t feel a tremendous amount of responsibility, then they would be wrong,” Debicki said.Credit...Keith Bernstein/Netflix

Was there any hasty rewriting of scripts after her death? Any tweaking of story lines?

WEST I asked Peter or Netflix a few times last year, “What’s going to happen when the queen dies?” And they said, “Pretty much nothing.” I was struck when she died that there wasn’t any sense of, “Oh no, oh gosh, we’ve been awful.” What it underlined for me was the degree of respect with which the writers and everybody have taken these stories and these figures. It was comforting that there was no sense of needing to re-evaluate things.

Did the mood change on set?

DEBICKI It did. I think it reactivated a sense of purpose. I feel like there was, if I’m honest, a lot of sadness. A real sense of loss. A lot of people I spoke to were surprised by how deeply they were affected by it.

How much of your own memories of Charles and Diana did you bring to these roles?

WEST Oh my God, I’ve been a royal watcher since they got married. I was obsessed with Diana. Still am. I must have been 10 or 11. I remember planning with two friends to try to go and camp out to see her — it’s rather sad now to relate.

DEBICKI My first memory of this period was, like I think many people my age, experiencing the funeral through your parents’ reaction to it. That’s a distinct memory for me.

Did you find that as you spent more time portraying these characters, your perspectives on them and their troubles changed?

WEST I think that’s one of the benefits of dramatizing these events now. People say, “Why do we need to churn this stuff up again?” There was no perspective then. The divorce and even the death of Diana — we’ve needed 25 years or whatever it is to process it. And it’s interesting what we now think and how we can be far more evenhanded in our view of it. There’s the benefit of hindsight.

Charles is quite a controversial role in the way he’s depicted. I was involved in the Prince’s Trust, and I really admire the work he does for that; I didn’t want to jeopardize that in any way. But I’m more and more persuaded that it doesn’t jeopardize that or anything to do with the royals.

The dissolution of Charles and Diana’s marriage is a major story line this season. “We’ve needed 25 years or whatever it is to process it,” West said.Credit...Keith Bernstein/Netflix

Josh O’Connor said the key to playing Charles is his posture, which becomes increasingly stooped, as if the burdens of the crown and his mother’s disapproval weigh on his head. Did either of you have particular traits that you tapped into to get at your character’s essence?

WEST Josh was sort of a turtle, and it’s so effective. So I do sort of keep that. The way [Charles] touches his clothes and is always fiddling — I realized the fiddling is the only way you can keep looking immaculate. The voice was sort of a closed mouth, keeping the teeth closed — in some ways the psychology of someone who is very careful about what he says. And he’s always pointing, and I realized it’s a really clever technique when he’s going through a crowd. He points to people and he’s able to make people feel like they’ve made a connection. So I adopt a lot of the pointing.

DEBICKI That was really my favorite thing. Do you remember how many times in scenes I would just ask you to stop pointing at things? [Laughs.]

We have a movement coach in “The Crown,” and her job is to help us get inside of the physicalities that are attributed to these people. If you want to go deep, the research department can provide you with this huge amount of archival footage. I love watching the really raw, uncut stuff, where it’s just these weird little reels that go for, like, 40 seconds, and it’s the two of them getting out of a car. There’s so much available, so I watched a lot of that. How much can be said and how much is left unsaid, and how that manifests in the bodies, is very interesting for actors to work through.

Perhaps this is silly, Elizabeth, but what is it like wearing Diana’s amazing clothes?

DEBICKI I don’t think it’s silly because it’s so much a part of the character. It’s fascinating what makes somebody iconic, what makes their wardrobe iconic. Princess Diana was so iconic, and so cool — the kind of cool I could never ever be. It came from her in this sense of, “I will create a narrative that is separate to the one that I can speak about, and I will do it with my clothing.”

How difficult was it to master Diana’s signature gaze?

DEBICKI Not as hard as one would think. It comes, perhaps a little alarmingly, naturally. [Laughs.]

Dominic, now that Prince Charles is King Charles III, do you find yourself playing him any differently?

WEST I was hoping for a pay raise but … [laughs]. This is just wonderful food for me. The tells, the little irritable bloody pen. I was just glued to his Accession Council. You saw why “The Crown” and the monarchy have so fascinated people. Who knew about the archers coming out, defending the queen with bow and arrow? And all these extraordinarily arcane people showed up and have been practicing, it turns out, every month for the last, like, 200 years. A Mad Hatter’s tea party. [Laughs.]

If the British armed forces are not perhaps what they were on the world stage, they’re certainly world beaters in ceremony and ritual and pomp. We’re still good for theater.