The Guardian view on the return of super-thin models: a worrying trend

The Guardian view on the return of super-thin models: a worrying trend

At a time when anxieties about body image are rife, the idealisation of skinniness is too dangerous to leave to the whims of the fashion industry 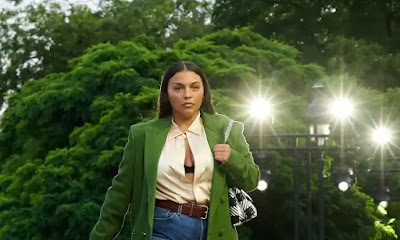 The ‘curve’ model Paloma Elsesser is one of the most sought-after catwalk stars.

Reports from the latest high-profile catwalk shows have sent a shiver through the bones of the body positivity movement. From Versace to Burberry and Stella McCartney, wafer-thin bodies appear to be back in vogue, in costumes that both hide little and depend on having little to hide. The most striking example was at Paris fashion week, where Bella Hadid, a model for the French designers Coperni, stood almost naked for nine minutes while a dress was sprayed on to her body.

It’s in the nature of the fashion industry to be fickle, and to reflect idealised images that have little to do with the day-to-day reality of the people who, come next spring, will be buying more prosaic interpretations of these unworldly visions on the high street. You only have to look back at the work of, say, Zandra Rhodes to appreciate that catwalk designs are artworks: the veteran British designer has even set up her own museum in London to celebrate this fact.

However, the ideal of the ultra-thin model has come to be connected over the years with all sorts of damaging behaviours, from fat-shaming to eating disorders among young men and women. It is particularly worrying to hear the term “heroin chic”, three decades after Kate Moss strutted it down the catwalk.

Though Ms Moss has distanced herself from the term, telling Radio 4’s Desert Island Discs that she was just naturally thin, one must not forget its association with others who were not so lucky, such as the American supermodel Gia Carangi, whose life, and premature death at the age of 26, were commemorated in a 1998 film starring Angelina Jolie.

The body positivity movement itself has come in for some criticism for condoning obesity and encouraging a different range of eating disorders, but in the fashion industry it has largely meant embracing models who are simply bigger than average, which in the UK means above a size 12.

Plus-size – or “curve” – models are not going away, according to analysts for the search engine Tagwalk, and one of their number, the American Paloma Elsesser, is among the world’s most sought-after catwalk stars. Yet moves by social media companies such as Instagram and TikTok to protect users from the pursuit of #thinspo (thin inspiration) underline that this is no time for complacency.

In 2017 real progress was made when two leading fashion conglomerates banned size zero models. France had recently followed Italy, Spain and Israel in legislating against the use of any who were “unrealistically thin”. The UK has yet to follow suit, leaving it to the Advertising Standards Authority to ban advertisements featuring unhealthily thin models in response to public complaints. This is shutting the gate after the cat has walked.

Last year, the parliamentary women and equalities committee published a damning report on the government’s approach to eating disorders and body image. They were responding to a submission by academics involved in a long-term research project in north-east England, whose recommendations included legislation on a minimum body mass index for models. It is an issue too important to leave to the whims of fashion.