And now Ladies and Gentlemen ... the long awaited: The Politician's ... Husband ! 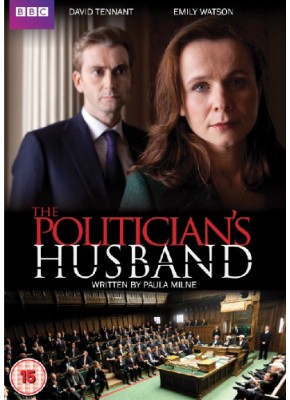 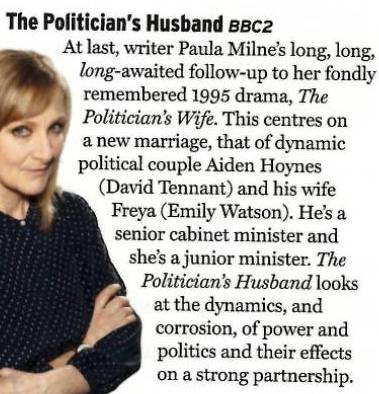 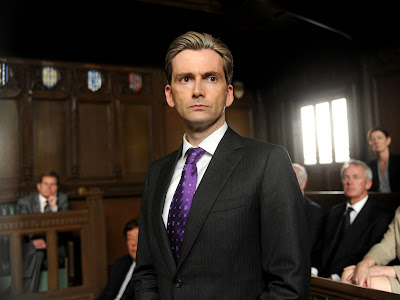 The Politician's Husband – TV review
Ambition, betrayal and battles in the bedroom – and that's just episode one of this follow-up to Paula Milne's The Politician's Wife
Sam Wollaston
The Guardian, Friday 26 April 2013 / http://www.guardian.co.uk/tv-and-radio/2013/apr/26/politicians-husband-david-tennant-emily-watson

I like to think of a few real politicians watching The Politician's Husband (BBC1). Yvette Cooper and Ed Balls, certainly; it might give her a few ideas. Ed Miliband, too, for the betrayal, though here the betrayal is not of a brother, but of a best friend, best man, godparent of children etc. And any number of politicians for dramatic resignations and/or leadership challengers – Geoffrey Howe, Michael Heseltine, John Redwood …

In the belated follow-up to Paula Milne's 1995 drama The Politician's Wife, Westminster golden boy Aiden Hoynes (television's golden boy David Tennant, worryingly golden-haired here) resigns from the government, nominally in protest at the PM's immigration policy, though really because he is challenging for the leadership himself. It backfires big time, mainly because his best mate, secretary of state for work and pensions and master of the dark arts Bruce Babbish (Ed Stoppard) hangs him out to dry. Aiden scuttles home, to plot bitterly, between the school run and comedy dismal MP's surgeries in the local church hall; and to stare at a symbolic question mark-shaped crack on the bedroom ceiling. While the political career of his wife, Freya Gardner (Emily Watson), who always put the brakes on her own ambition to support her husband and for the good of the family, goes through the roof.

So we're not just talking about power battles in the corridors of Westminster here, we're (actually mainly) talking about power battles in the hall and on the landing at the top of the stairs of a semi in a salubrious-looking London suburb. Oh and in the bedroom; big shift going on in there too. It's not just careerwise that Freya's on top. And she's enjoying it, a lot.

There is heaps to enjoy in The Politician's Husband. Well, him and her, Tennant and Watson; they're both great, and great together, convincing as a couple. I like – no, not like, approve of – the fact that their son Noah has Asperger's. That also makes them more convincing, more real – even before the  massive (question mark-shaped?) cracks begin to appear in their relationship. And Aiden's difficult relationship with Noah, a son he – and she – clearly find it very hard to love, acts as a subplot to what is going on between his parents and down in London SW1.

It's an entertaining, but bleak, picture of politics in this country too, a world of bitter competitiveness and ruthless ambition that has very little to do with the interests of the country. Any ideological motivation someone might have once had is soon squeezed out by the pressure of the system. Soon it's only about party politics, power, battles and games. Probably fairly accurate, then.

A couple of things don't quite ring true for me. Aiden's total betrayal by his pal Bruce, whose hand Aiden held when Bruce's wife left him and when he had a health scare, now stabbing him in the back and kicking him in the balls, when he's down. I suspect there's more betrayal to come from him, I'm thinking maybe involving Freya. No, that's OK, they all do that? OK then, the bottle of wine that Bruce orders over lunch with Freya? Lunchtime boozing doesn't go on any more does it? Unless you're Kenneth Clarke, perhaps. But if you're young and thrusting and power-crazed, you can't do all that after a bottle of 2009 Châteauneuf du Pape blanc.

The Politician's Husband isn't subtle, sometimes to the point of crudeness. Like when Freya, invited to drinks at No 10, sneaks in to the cabinet room, and runs her hands over the backs of the chairs, the ones at the middle of the table where the PM and the most important members sit, and she is overcome with a look of deep sensuality, literally seduced by the power. Ha! Nor is it Borgen – it lacks that humanness, the genuine plausibility and depth of character of the Danish drama. And though, like Borgen, it does have a strong woman at its heart, she's not strong simply because she's brilliant; it looks as if Freya is going to be sucked into the wicked power game with the rest of them. Oh, what the hell. It's melodrama, and a lot of fun, a big boiling pot of hot, lusty power soup, with crunchy croutons of deceit and a generous sprinkling of revenge.

Nice performance by Kirsty Wark too – almost uncanny – as herself. 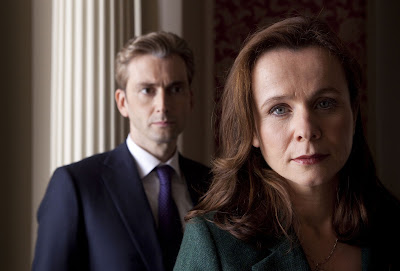 Sometimes you have to wait awhile for a sequel. But fans of The Politician’s Wife have had to be more patient than most. It is 18 years since Paula Milne’s original political drama caused a stir, and won a Bafta, with the story of a male sleazeball politician. Last night, the companion piece The Politician’s Husband (BBC Two) finally arrived.
Not much has changed in Milne’s view of Westminster. At the end of The Politician’s Wife, the male MP had resigned and his wife has won his seat in Parliament. Last night in the first episode, the MP, Aiden Hoynes, resigned from the Cabinet and, pretty sharpish, his wife (also an MP) walked right into the ensuing vacancy. And male sleazeballs were everywhere.
Hoynes, played by David Tennant, resigned to spark a leadership race within his party – which, of course, he planned to win. But he was betrayed by his best friend who switched allegiance, propelling everyone into a story of deceit, betrayal and egotism (or “politics”, as we call it).
Tennant is, of course, an excellent actor. But in general he uses one of two styles: 1) jumpy and active (eg Doctor Who and those annoying Virgin ads), or 2) moody (eg Broadchurch). If some enterprising manufacturer were to make a walking, talking David Tennant doll, the acting control on the back would only need to be a switch, rather than a dial. And in The Politician’s Husband it was definitely flicked to “jumpy” – especially after his friend lets him down.
While this meant Tennant was not totally believable as a political leader, when he was with Emily Watson, as Freya, they were highly convincing as a career couple whose sexual glue seemed to be ambition. Until, that is, she too appeared to betray him…
And that was the interesting part. The political tale seemed stereotyped and slightly old-fashioned (Hoynes kicked a metal bin to show he’s angry at one point, a dramatic device that was hackneyed even in 1995). And it feels unlikely to tell us anything surprising in the coming two episodes. We already know enough to bet on two things: that Freya will come out of it better than any of the men and that the plot will reinforce the common view that politicians are like babies’ nappies: they should be changed regularly. And for the same reason.
As a political drama, The Politician’s Husband is humdrum. We are cynical enough these days to know that betrayal is what politicians do. We yawn at it. What makes me want to watch again is the personal story: the way that ambition seems to be turning from the adhesive to the corrosive acid at the heart of the Hoynes’ marriage. That’s the real drama. 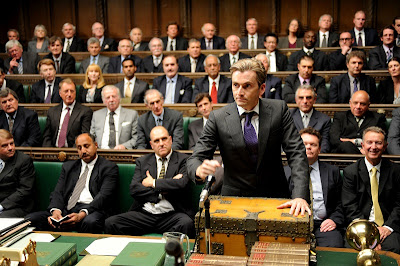