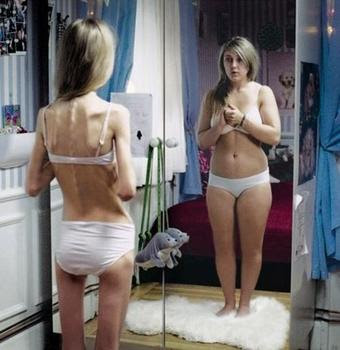 The Vogue Factor: Fashion really isn’t worth dying for

Imagine a factory where the employees are regularly being starved.

Some are so desperate with hunger that they pick up tissues from the floor and stuff them into their mouths, while a few become so weak that they have to be admitted to hospital and put on a drip. Any industry which treated workers so badly would be targeted by undercover reporters. Photographs of emaciated workers would cause an outcry, questions would be asked in parliament and the factory would be closed down. This would happen anywhere in the developed world with one glaring exception, and that’s the fashion industry.
“You know how you read interviews where models insist that they eat a lot? Not true,” says Kirstie Clements, who edited Vogue Australia for 13 years. “The only way they can get that thin is to stop eating. They eat tissue paper to stave off the hunger pangs – literally ball it up and eat it.” It’s one of several startling claims in The Vogue Factor, a book that Clements has written about the industry she knows from the inside, and it’s not even the most shocking.
Clements lifts the lid on the existence of “fit” models, the women used to check the fit of clothes who are expected to be even thinner than the catwalk variety. “Fit” in this instance means just the opposite, as Clements discovered when she asked a top model how she was getting on with her flatmate. “Oh, it’s fine,” was the insouciant reply, “she’s a fit model so she is mostly in hospital on a drip.”
By any normal standards, someone whose job puts them in hospital most of the time is: (a) deluded; and (b) abused. But the fashion industry departed from normal standards years ago, not even bothering to hide the damage it inflicts mostly (but not exclusively) on young women. It’s paraded on catwalks and in fashion spreads for anyone to see, evident in models whose jutting hipbones and stick limbs suggest they’re suffering from malnutrition. When flipping through a glossy magazine a couple of days ago, I was mesmerised by a perfume ad featuring two models whose naked bodies were as skinny as saplings.
Clements recalls a fashion shoot which lasted for three days yet she didn’t see the model eat once, even when the girl got so weak that she could hardly stand or open her eyes. Everyone involved in the fashion industry is expected to buy into a fantasy in which there’s nothing unusual about being five foot nine and weighing 45 kilos. But the death toll on the international modelling circuit – Ana Carolina Reston, Luisel Ramos and her sister Eliana, Isabelle Caro – tells a different story. Fashion isn’t worth dying for, so let’s start applying the normal health and safety standards to this sick industry. 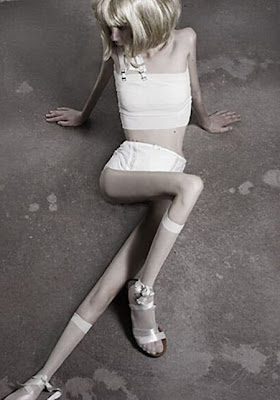 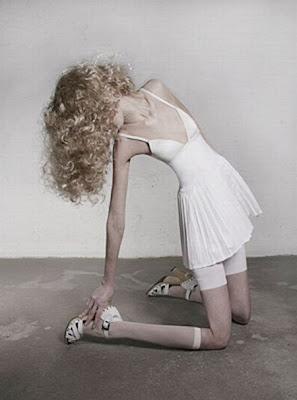 By MARTHA DE LACEY in The Daily Mail.

For those who puzzle over how supermodels stay so whippet thin, a former Vogue editor has lifted the lid on the horrific lengths some go to to maintain their wispy waistlines and cut-glass hipbones.
Kirstie Clements, sensationally fired from her role as editor of Australian Vogue last May, has written a tell-all book about the fashion industry, claiming some models eat tissue paper to feel full, starve themselves for days on end, spend frequent stints on hospital drips, and are often so weak with hunger they struggle to keep their eyes open.
As reported by Georgia Graham in the International Business Times, The Vogue Factor also explains that within the fashion world there is 'thin', and then there is 'Paris thin' - a term that describes the size of a model who has starved their already fragile body down two dress sizes in order to be cast in big oversea shows.
In her controversial tome, Clements says she once spent three days on a shoot with a model who didn't see her eat a single meal - and that on the final day she could barely stand or keep her eyes open.
She also reveals how an Russian model once told her that her flat mate was a 'fit' model - a model whose body is used by top designers for clothes-fittings - and therefore spent lots of time on a drip.
Clements spent 25 years at Australian Vogue - her book's subhead is 'from front desk to editor' - and steered the ship for 13 of them.
Her departure was sudden - she was called to a meeting and dismissed, forced to clean her office and leave without bidding farewell to her staff - and she was replaced quickly by Edwina McCann, editor of Harper's Bazaar.
Clements describes her sacking simply as a 'regime change' that was part and parcel of the dramatic Vogue narrative, but some critics believe the new book - her first - is her way of exacting revenge on the Rupert Murdoch-owned title.