Helena Rubinstein / The Woman Who Invented Beauty', by Michèle Fitoussi. 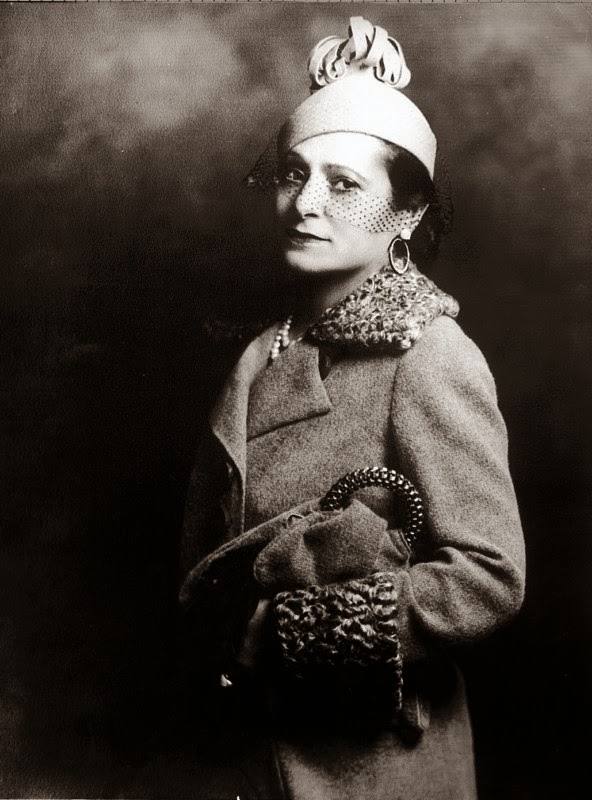 Helena Rubinstein (born Chaya Rubinstein, December 25, 1870 – April 1, 1965), a Polish-born American business magnate. A cosmetics entrepreneur she was the founder and eponym of company Helena Rubinstein, Incorporated, which made her one of the world's richest women.
Rubinstein was the eldest of eight daughters born to a Jewish couple, Augusta - Gitte (Gitel) Shaindel Rubinstein née Silberfeld and Horace - Naftoli Hertz Rubinstein; who was a shopkeeper in Kraków.

Rubinstein immigrated from and arrived in in 1902, with no money and little English. Her stylish clothes and milky complexion did not pass unnoticed among the town's ladies, however, and she soon found enthusiastic buyers for the jars of beauty cream in her luggage. Spotting a market, she began to make her own. Fortunately, a key ingredient was readily at hand.

Coleraine, in , where her uncle was a shopkeeper, might have been an "awful place" but it did not lack of that ingredient. Sheep, some 75 million of them, were the wealth of the nation and the Western District's vast mobs of merinos produced the finest wool in the land, secreting abundant quantities of a grease, chemically known as lanolin, in the process. To disguise this essential component of her product's pungent odour, Rubinstein experimented with lavender, pine bark and water lilies.

She also managed to fall out with her uncle. After a stint as a bush governess, she got a job as a waitress at the Winter Garden tearooms in . There, she found an admirer willing to stump up the funds to launch her Crème Valaze, supposedly including herbs imported "from the ". Costing ten pence and selling for six shillings, it walked off the shelves as fast as she could pack it in pots. Now calling herself Helena, Rubinstein could soon afford to open a salon in fashionable , selling glamour as a science to clients whose skin was "diagnosed" and a suitable treatment "prescribed".

was next, and within five years Australian operations were profitable enough to finance a Salon de Beauté Valaze in . As such, Rubinstein formed one of the world's first cosmetic companies. Her business enterprise proved immensely successful and later in life, she used her enormous wealth to support charitable institutions in the fields of education, art and health. 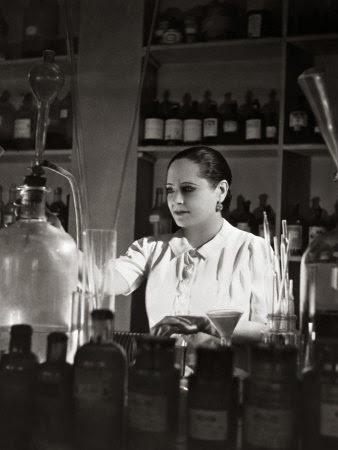 Diminutive at . . (), she rapidly expanded her operation. In 1908, her sister Ceska assumed the shop's operation, when, with $100,000, Rubinstein moved to and began what was to become an international enterprise. (Women at this time could not obtain bank loans, so the money was her own.)

In 1908, she married the Polish-born American journalist Edward William Titus in . They had two sons, Roy Valentine Titus (London, December 12, 1909–New York, June 18, 1989) and Horace Titus (London, April 23, 1912–New York, May 18, 1958). They eventually moved to where she opened a salon in 1912. Her husband helped with writing the publicity and set up a small publishing house, published Lady Chatterley's Lover and hired Samuel Putnam to translate famous model Kiki's memoirs.

Rubinstein threw lavish dinner parties and became known for apocryphal quips, such as when an intoxicated French ambassador expressed vitriol toward Edith Sitwell and her brother Sacheverell: "Vos ancêtres ont brûlé Jeanne d'Arc!" Rubinstein, who knew little French, asked a guest what the ambassador had said. "He said, 'Your ancestors burned Joan of Arc.'" Rubinstein replied, "Well, someone had to do it."

At another fête, Marcel Proust asked her what makeup a duchess might wear. She summarily dismissed him because "he smelt of mothballs." Rubinstein recollected later, "How was I to know he was going to be famous?"

At the outbreak of World War I, she and Titus moved to , where she opened a cosmetics salon in 1915, the forerunner of a chain throughout the country. This was the beginning of her vicious rivalry with the other great lady of the cosmetics industry, Elizabeth Arden. Both Rubinstein and Arden, who died within 18 months of each other, were social climbers. And they were both keenly aware of effective marketing and luxurious packaging, the attraction of beauticians in neat uniforms, the value of celebrity endorsements, the perceived value of overpricing and the promotion of the pseudoscience of skincare.

From 1917, Rubinstein took on the manufacturing and wholesale distribution of her products. The "Day of Beauty" in the various salons became a great success. The purported portrait of Rubinstein in her advertising was of a middle-age mannequin with a Gentile appearance. 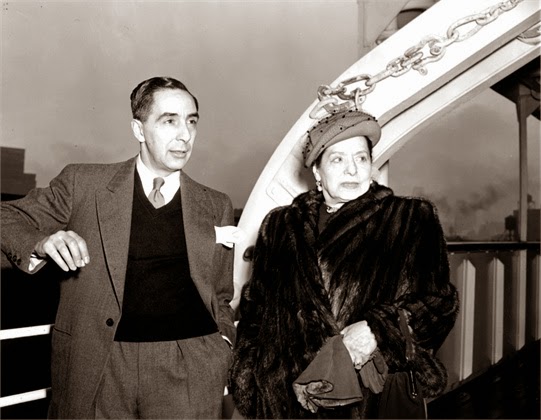 In 1928, she sold the American business to Lehman Brothers for $7.3 million, ($88 million in 2007). After the arrival of the Great Depression, she bought back the nearly worthless stock for less than $1 million and eventually turned the shares into values of multimillion dollars, establishing salons and outlets in almost a dozen cities. Her subsequent spa at included a restaurant, a gymnasium and rugs by painter Joan Miró. She commissioned artist Salvador Dalí to design a powder compact as well a portrait of herself.

Freed of her former marriage vows, in 1938 Helena readily married Prince Artchil Gourielli-Tchkonia (1895–1955), whose somewhat clouded materlineal claim to Georgian nobility, as that of Prince Artchil Gourielli-Tchkonia (sometimes spelled Courielli-Tchkonia; born in Georgia, February 18, 1895, died in New York City November 21, 1955), stemmed from his having been born a member of the untitled noble Tchkonia family of Guria, enticing the ambitious young man to appropriate the genuine title of his grandmother, born Princess Gourielli.

Self-styled Prince Artchil Gourielli-Tchkonia, was 23 years younger than Rubinstein. Eager for a regal title to call her own, Rubinstein pursued the handsome youth avidly; coming to name a male cosmetics line after her youthful prized catch. Some have claimed that the marriage was a marketing ploy, including Rubinstein's being able to pass herself off as Helena Princess Gourielli.

A multimillionaire of contrasts, Rubinstein took a bag lunch to work and was very frugal in many matters, but bought top-fashion clothing and valuable fine art and furniture. Concerning art, she founded the respectable Helena Rubinstein Pavilion of Contemporary Art in Tel Aviv and in 1957 she established the Helena Rubinstein travelling art scholarship in .
In 1953, she established the philanthropic Helena Rubinstein Foundation to provide funds to organizations specializing in health, medical research and rehabilitation as well as to the America Israel Cultural Foundation and scholarships to Israelis.

In 1959, Rubinstein represented the cosmetics industry at the American National Exhibition in .

Called "Madame" by her employees, she eschewed idle chatter, continued to be active in the corporation throughout her life, even from her sick bed, and staffed the company with her relatives.

Mme. Rubinstein died April 1, 1965, and was buried in in . Some of her estate, including African and fine art, Lucite furniture, and overwrought Victorian furniture upholstered in purple, was auctioned in 1966 at the Park-Bernet Galleries in New York.

One of Rubinstein's numerous mantras was: "There are no ugly women, only lazy ones."
A scholarly study of her exclusive beauty salons and how they blurred and influenced the conceptual boundaries at the time among fashion, art galleries, the domestic interior and versions of modernism is explored by Marie J. Clifford (Winterthur Portfolio, vol. 38). A feature-length documentary film, The Powder and the Glory (2009) by Ann Carol Grossman and Arnie Reisman, details the rivalry between Rubinstein and Elizabeth Arden.

Her methodology has been described thus:

She was "the first self-made female millionaire, an accomplishment she owed primarily to publicity savvy. She knew how to advertise—using 'fear copy with a bit of blah-blah'—and introduced the concept of 'problem' skin types. She also pioneered the use of pseudoscience in marketing, donning a lab coat in many advertisements, despite the fact that her only training had been a two-month tour of European skin-care facilities. She knew how to manipulate consumers' status anxiety, as well: If a product faltered initially, she would hike the price to raise the perceived value."


In 1973, the company Helena Rubinstein, Inc. was sold to Colgate Palmolive, and is now owned by L'Oréal. 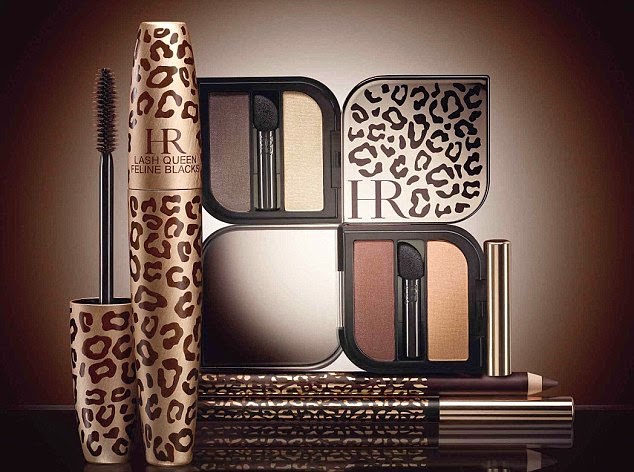 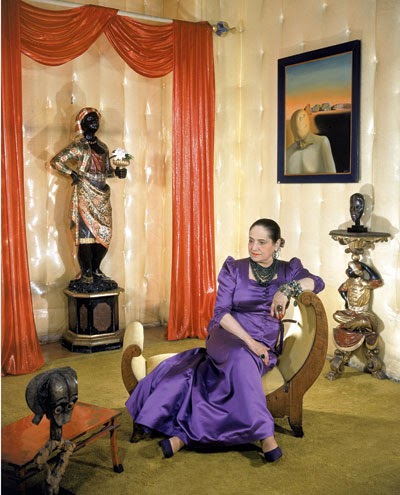