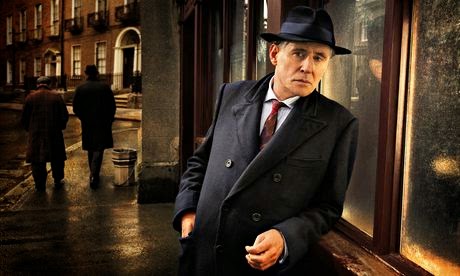 There are two John Banvilles. The first, a Booker prize-winning novelist, is famed for his poetic and sensory fiction. The second, a crime fiction alter-ego by the name of Benjamin Black, is the one the author admires most.

"My Benjamin Black books are a triumph of nerve and spontaneity I hope," Banville said, "whereas Banville is moulding things away quietly down on the ground, in the darkness for years on end, hoping eventually to come up into some kind of light."

The Benjamin Black books, centred around the charismatic but troubled pathologist Quirke in 1950s , are now to be brought to life by BBC One. The highly anticipated adaptation, Quirke, will air on Sunday night and features the Irish actor Gabriel Byrne in the title role alongside Michael Gambon, with each episode taking their storyline from a different book in the series.
Banville, who won the Booker for The Sea in 2005, began writing his Quirke novels in 2004 after being inspired to adapt a screenplay he had written years earlier that never made it to the screen.

He said the Quirke books were rich with his childhood recollections of , far more than so his literary writing.

"I trawled through my memories of being a child when I was writing the books and I was astonished at how much I could remember.

"Quirke lives in the apartment in which I inherited from my aunt and he moves around in that area where I was when I first moved to . He's better off than we were in those days, but yes, it's soaked in my recollections. It is more connected to the circumstances of my life than my Banville books.

"As a child seemed like a magical world. Even still, the smell of diesel fumes still brings me back there. But looking back I realise what a narrow world it was, how poverty-stricken it was. It was a beautiful city, dingy and ramshackle with a melancholy beauty – most of which is gone now."

The hard-drinking, intolerant yet highly instinctive Quirke is a character Banville said had come from the "damaged recesses of my Irish soul. I sympathise with Quirke; he is a very damaged person, as many Irish people are from their upbringing.

"I wish he had more of a sense of humour, but it's quite hard to be humorous in crime fiction, I'm not sure why. My Spanish publisher said to me, I'm so in love with Quirke but couldn't you lighten him up just a little bit. And Gabriel [Byrne] brings a lot of darkness to the character."

While religion is notably absent from much of Banville's literary fiction, with his Quirke novels set in 1950s "when the church controlled our lives at every level", Banville admitted it was impossible to ignore.

The author himself conceded condemned the Catholic church as a cult, having abandoned his faith in his late teens.

"Back then it was driven by fear. When I was growing up as a Catholic, we were never told about the joys of religion. What we were told about was if that we didn't love God enough to displease ourselves, then God would condemn us to eternal damnation. It's a pretty potent message to give to a seven-year-old child and to keep banging it into us throughout our lives, so giving it up was quite a wrench. If you've been inculcated into a cult, and Irish Catholicism is a cult, then it is hard to break free from."

He continued: "When you're brainwashed like we were, you think this is normal, how things should be and Catholic upbringing is straightforward brainwashing. We were fed a lot of nonsense and a lot of lies under the guise of faith. Meanwhile the church is raking in money and abusing the people in its care. The priests and nuns were denied sexual love and amorous love which I think is appalling, it's a criminal thing to do to people.

"We knew that there was abuse and we knew it was bad, but we didn't know it was quite as bad as what was revealed, and we didn't know the criminal way in which the church protected the abusers, switching them from parish to parish to cover it up. Human beings have this amazing capacity to know but also not know at the same time."

Banville had little involvement in the TV adaptation – "the last thing they want is the author on set" – but had a brief meeting with the writers.

"I met Andrew Davies and we spent a very pleasant afternoon walking round Quirke's and went for a pint and he asked me some questions about Irish phrases – that was about it really."

As an author who famously deemed his literary novels "an embarrassment", Banville said he had a far less conflicted relationship with his Benjamin Black work.

"They are two completely different writers who have two completely different processes. I certainly like the Benjamin Black books more than my Banville novels because they are pieces of craft work and I like to think they are honestly made," he said. "My Banville books are attempts to be works of art but because perfection can never be achieved they always ultimately fail. So when I look at my Banville books all I see are the flaws, the faults, the failures, place where I should have kept going to make a sentence better."

He added: "When I publish a book and have to do readings, I do it with one eye closed or through my fingers because I know I'm going to find all kinds of horrors." 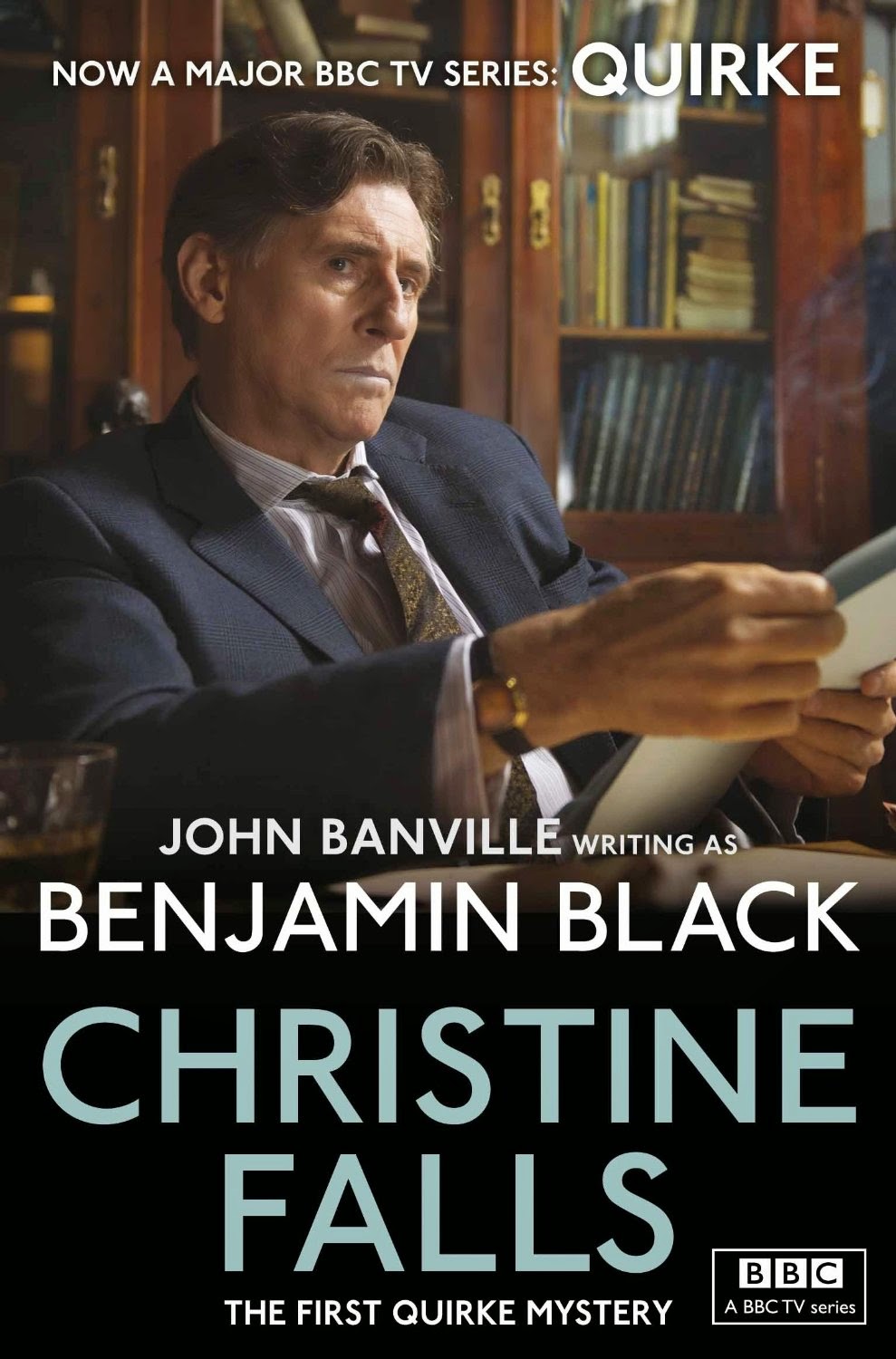 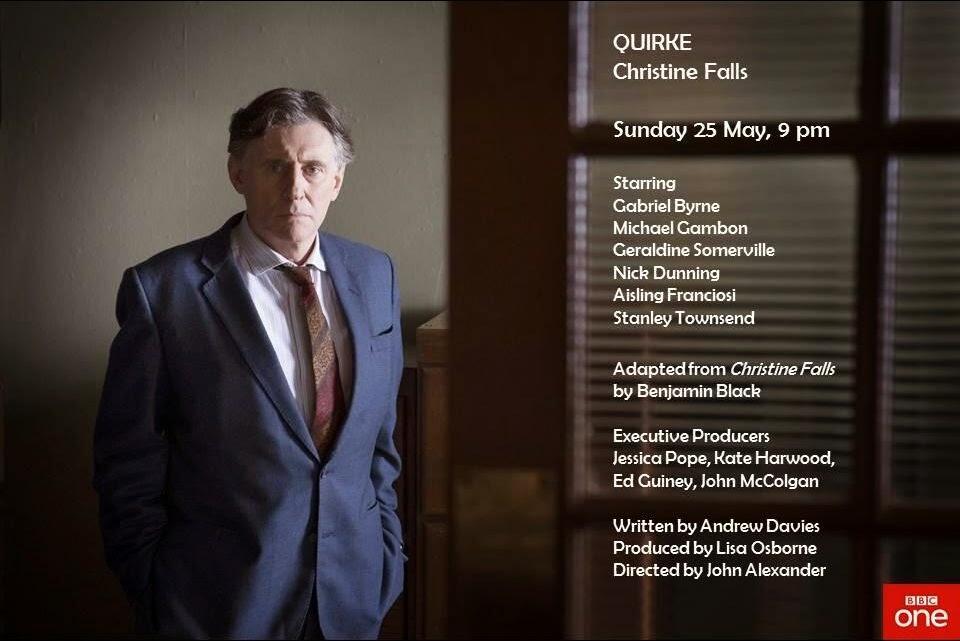 Quirke, episode one, BBC One, review: 'too long'
Gabriel Byrne's performance in Quirke transfixes the attention, but it wasn’t enough to make up for the drama's flaws, says Chris Harvey
By Chris Harvey10:30PM BST 25 May 2014 / http://www.telegraph.co.uk/culture/tvandradio/tv-and-radio-reviews/10852191/Quirke-episode-one-BBC-One-review-too-long.html

Ten minutes into the first episode of Quirke (BBC One), the new pathologist detective drama adapted by Andrew Davies from John Banville’s novels under the pen name of Benjamin Black, I thought I was in some sozzled dream of in the Fifties. It was permanently dark, or raining, people were always drunk, or drinking, and I kept hearing people say the words of the episode’s title – “Christine Falls” – without any real sense of who or what they referred to.
Gabriel Byrne was on screen though, being Gabriel Byrne, being Quirke. Byrne’s presence almost guarantees Banville’s pathologist a quiet intensity and an air of life lived and love lost. , I gradually came to realise, was a pregnant woman, who had died and found her way onto Quirke’s post-mortem table. It had happened before the drama began. Quirke didn’t agree with the cause of death given, and he particularly didn’t like the fact that it had been given by his adoptive brother Malachy (Nick Dunning), who appeared to hate him. He wanted to know what had happened to the baby.
The list of important characters kept growing: the woman whose house Christine Falls had been in when she died (soon to be dead herself); the brothers’ powerful grandfather Judge Garret Griffin (Michael Gambon); Malachy’s daughter Phoebe (Aisling Franciosi). She was in love with Quirke, who she thought was her uncle, but who turned out to be her father.
For a literary adapter of Davies’s talent (Pride and Prejudice, Bleak House), it was fearfully hard to follow, and at a 90-minute run time that felt very long, it would be hard to argue that extreme compression was the cause.
The whole drama decamped to for the last half hour, to introduce more new characters and explain the fate of the baby, who had been shipped out as part of a trade in babies born to the poor women of and , but who had been killed by a chauffeur, who turned out to be a potential rapist.


There was just too much plot, too much gloomy stylised direction and too many strings on the soundtrack, bringing a surreal melodramatic quality to some of the most serious moments. Byrne gave the drama that warm burr and powerful charisma that can transfix the attention, but it wasn’t enough to make up for its flaws. It was heavy going to get to the end. 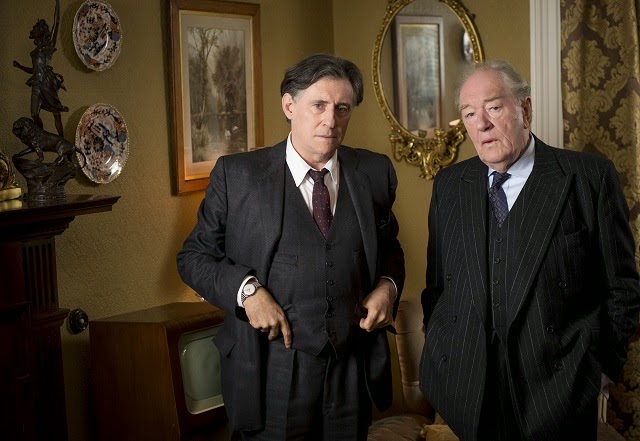 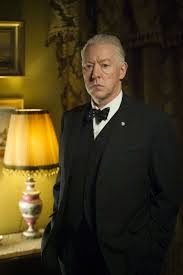 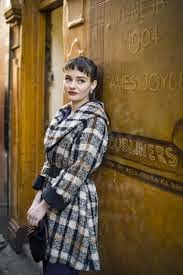 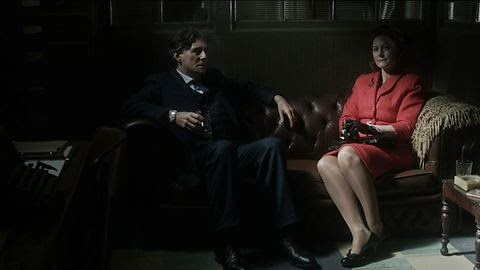 Quirke, BBC One, review: 'it made no sense'
The final episode of Quirke was hard to understand - and not just because the dialogue was indecipherable, says Benji Wilson
By Benji Wilson10:00PM BST 08 Jun 2014 / http://www.telegraph.co.uk/culture/tvandradio/tv-and-radio-reviews/10882497/Quirke-BBC-One-review-it-made-no-sense.html

The third and final Quirke (BBC One) was transmitted in the shadow of what I cannot bring myself to call Muttergate (and so will label The Rumble in the Mumble). After the big stink about Jamaica Inn being inaudible, Quirke’s own writer, Andrew Davies, admitted that he had been forced to watch the series with the subtitles on, because he couldn’t hear what the actors were saying.
So in the interests of science I decided to conduct an experiment – I watched a good part of the last half-hour with the sound off (and no subtitles). And I have to say it didn’t suffer greatly. Because I’m not sure that anyone has much of a clue what’s going on in even when you can hear the words.
Ever since Dr Quirke, played by Gabriel Byrne, returned to heavyweight boozing he hasn’t had much of a clue what’s going on either. That’s not the most fertile ground for a testing whodunit.
You sensed in last night’s episode that the director wasn’t particularly interested in the whys and the wherefores of the plot himself. Whether it was following some aesthetic credo or just because they couldn’t afford convincing backdrops, almost all of it was filmed with the camera right in the actors’ faces. In the case of Gabriel Byrne, a man whose face is an atlas of world-weariness, that’s understandable. But then you remember that Quirke is supposed to be a detective drama with a mystery to be solved in each episode. Here the mystery was: what happened to the storyline?
Quirke was filmed nearly two years ago now. It’s been lingering around the BBC schedulers’ office like those dodgy pickled onions at the back of the fridge, which suggests that the Beeb didn’t know what to do with it. Though Quirke is no stinker, it’s a strange beast. It’s way, way too long, it wears its noir influences about as subtly as a teenager wears sports brands and it’s largely devoid of anything you could call momentum. Yet at the same time it’s chock full of wonderful performances. In particular Aisling Franciosi as Phoebe – a difficult role situated somewhere between sidekick, daughter and love interest – pulled off the triple salchow of being strong, sweet and subtle at the same time with aplomb. We will see much more of her I don’t doubt. As for Quirke? Whisper it, but I suspect not.