Nancy Clara Cunard (10 March 1896 – 17 March 1965) was a writer, heiress and political activist. She was born into the British upper class and devoted much of her life to fighting racism and fascism. She became a muse to some of the 20th century's most distinguished writers and artists, including Wyndham Lewis, Aldous Huxley, Tristan Tzara, Ezra Pound and Louis Aragon, who were among her lovers, Ernest Hemingway, James Joyce, Constantin Brâncuși, Langston Hughes, Man Ray, and William Carlos Williams. MI5 documents reveal that she was involved with Indian socialist leader VK Krishna Menon. In later years, she suffered from mental illness, and her physical health deteriorated. She died at age 69, weighing only 26 kilos (57 pounds), in the Hôpital Cochin, Paris. 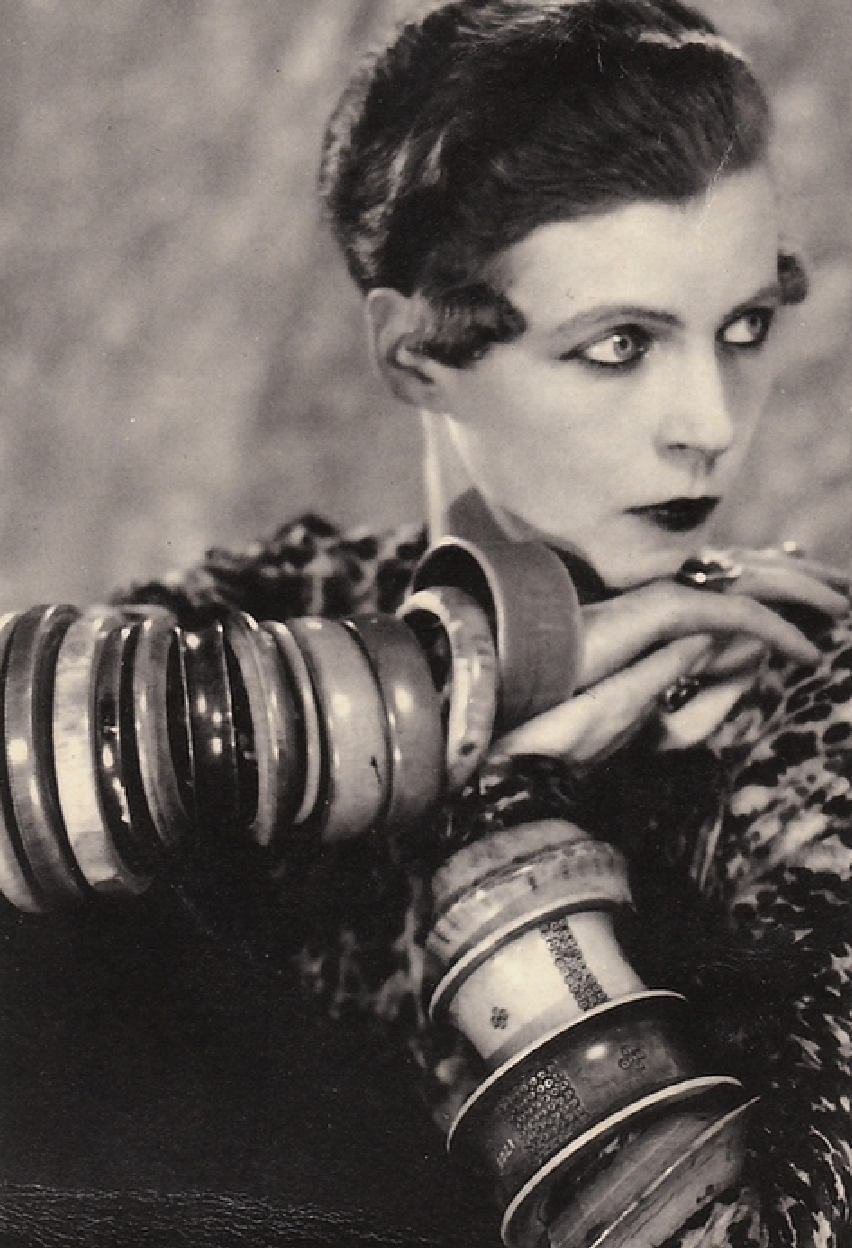 Cunard's style informed by her devotion to the artifacts of African culture was startlingly unconventional. The large-scale jewelry she favored, crafted of wood, bone and ivory, the natural materials used by native crafts people, was provocative and controversial. The bangles she wore on both arms snaking from wrist to elbow were considered outré adornments, which provoked media attention, visually compelling subject matter for photographers of the day. She was often photographed wearing her collection, those of African inspiration and neckpieces of wooden cubes, which paid homage to the concepts of Cubism. At first considered the bohemian affectation of an eccentric heiress, the fashion world came to legitimize this style as avant-garde, dubbing it the "barbaric look." Prestigious jewelry houses such as Boucheron created their own African-inspired cuff of gold beads. Boucheron, eschewing costly gemstones, incorporated into the finished creation green malachite and a striking purple mineral, purpurite, instead. It exhibited this high-end piece at the Exposition Coloniale in 1931. 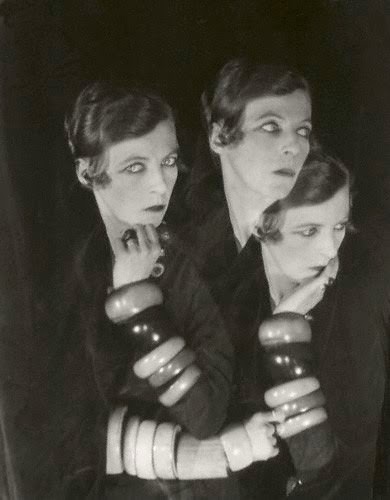 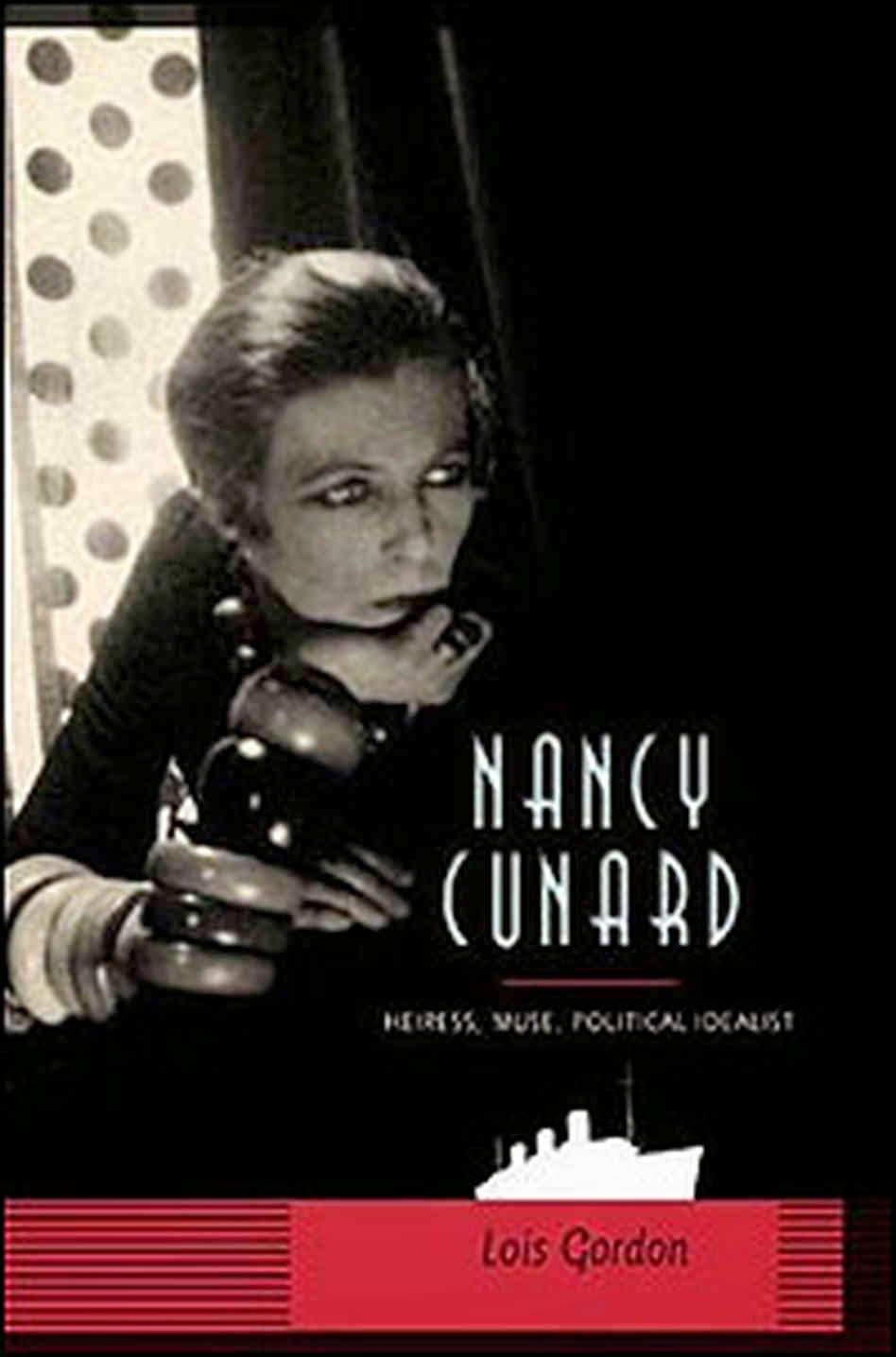 In his 1928 novel “Nadja,” André Breton cites an old French adage: “Tell me whom you haunt” — whom you befriend —“and I’ll tell you who you are.” Judged by this criterion, the English heiress Nancy Cunard, who “haunted” Breton’s Surrealists and countless other artists besides, is one of the biggest stars you’ve never heard of. T. S. Eliot put her in an early version of “The Waste Land”; Pablo Neruda celebrated her “lovely sky-blue eyes”; and Samuel Beckett praised “her spunk and verve.” All three future Nobel laureates had fraught romances with her. Wyndham Lewis, Aldous Huxley, Tristan Tzara, Ezra Pound and Louis Aragon were among her lovers. She played tennis with Ernest Hemingway, received house calls from James Joyce and modeled for Constantin Brancusi. Langston Hughes called her “one of my favorite folks in the world.” William Carlos Williams, who kept a picture of her in his study, deemed her “one of the major phenomena of history.”
This pedigree surely qualifies Cunard (1896-1965) as one of the 20th century’s most celebrated muses. But in her fine work, “Nancy Cunard: Heiress, Muse, Political Idealist,” Lois Gordon, a professor of English at Fairleigh Dickinson University, shows that Cunard refused to be defined by her glamour or, for that matter, by the riches she enjoyed as heir to the Cunard shipping fortune. This unconventional child of privilege worked as a poet, a publisher, a journalist and, above all, a tireless supporter of the disenfranchised. “I’ve always had the feeling,” she explained, “that everyone alive can [do] something that is worthwhile.” Indeed, her whole life illustrated this principle, as Gordon’s biography — the first substantial study to be published in almost 30 years — reveals.

The only child of a British baronet and an American socialite, Cunard grew up in an English castle where “the living area alone covered more ground space than, say, the New York Public Library.” But she was unhappy there. Her father, Bache, cared chiefly about hunting, fishing and horseback riding, while his wife, Maud, whose “appetite for cultural and social advancement was voracious,” focused on cultivating the era’s leading writers. Maud’s socializing bred extramarital dalliances that, to Nancy’s astonishment, Bache passively tolerated. Appalled by their “ambiguous moral values,” Cunard “grew up to despise everything her parents and their class represented.”

History favored her rebellion, as her 1914 debut in London society coincided with the start of World War I, which for Cunard ushered in “a period of overt defiance of parental and social demands” and “artistic and sexual experimentation.” Taking her cue from Maud, Cunard assembled a “Corrupt Coterie” of artists, most of whom “sooner or later” became her paramours. In this milieu, she met Ezra Pound, T. S. Eliot and Wyndham Lewis, who were then spearheading a “literary revolution” in England. According to Cunard, this movement “changed my life,” imbuing her with a belief “in the sacred mission of art to change history.”

In 1916, Cunard impulsively married a wounded veteran, only to separate from him 20 months later. In 1921, she began a five-year affair with Pound; she soon seduced Eliot too. “Dazzled” by both men’s achievements (and even though Eliot mocked her in his verse: “But women intellectual grow dull”), she wrote three books of poetry in the 1920s. Gordon maintains that “Parallax” (1925) was “favorably compared with” “The Waste Land,” although the claim is based on a single remark by one of Cunard’s friends. In truth, her verse in no way rivals Eliot’s: “— But if I were free / I would go on, see all the northern continents / Stretch out before me under winter sunsets; / Look into the psychology / Of Iceland, and plumb the imaginations / of strange people in faraway lands.” These unimpressive lines make it hard to agree with Gordon that “Nancy anticipated the metaphysical-ontological relativism that marked much of the 20th century’s turn from traditional values to a plural secularism.”

STILL, Cunard’s stabs at poetry furthered her ties to “strange people in faraway lands” — like the avant-garde community in Paris, where she moved in 1920. Here she encountered not only Hemingway and Williams, but also the Dadaists and Surrealists, who shared her belief “in the sacred mission of art” and her “commitment to exposing the false dreams and hollow values” of the ruling class. But Cunard had her reservations. A self-described anarchist, she never embraced the Communist worldview. She also chafed at her own image as a mere siren, and “yearned for a more meaningful identity.”

In 1928, this impulse led her to found the Hours Press. Located in the Norman countryside, this small publishing house issued books by prominent authors like Aragon and Pound and by lesser-known writers like Samuel Beckett, who won an Hours contract in a contest at 23. But she was distracted when she fell in love with Henry Crowder, an African-American jazz pianist who “introduced Nancy to the complex and agonizing situation of blacks in the United States.” Her eyes now opened to racial injustice, she discovered “the sense of purpose that would define the rest of her life.” 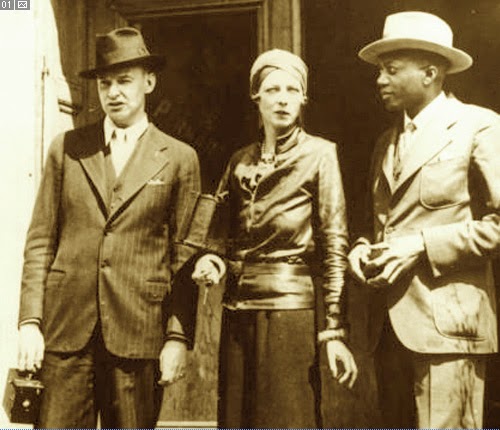 She edited and published “Negro” (1934), an almost 900-page anthology of black history and culture and a call to “condemn racial discrimination and appreciate the ... accomplishments of a long-suffering people.” Its 150 contributors included Theodore Dreiser, Zora Neale Hurston, W. E. B. Du Bois and Langston Hughes. Cunard herself wrote the preface, denouncing the “oppression” of “14 million Negroes in America.” Despite its urgent message and extensive scope (Gordon supplies generous excerpts), the press greeted the book’s publication with indifference and condescension.

The world proved even more judgmental about Cunard’s romantic ties to a black man. When she traveled to America in 1932, “she was maliciously attacked in the media” and in a barrage of hate mail. In England, her mother, now a widow, had “embarked upon a ruthless campaign” to separate her from Crowder. When Cunard failed to cooperate, Maud all but disinherited her.

Unbowed, Cunard continued her crusade, which by the mid-1930s took aim at fascism as well. She wrote dispatches for The Manchester Guardian, The Associated Negro Press, Crisis and other publications about Mussolini’s invasion of Ethiopia and Franco’s coup in Spain. In August 1936, she moved to Spain to cover the civil war there. Presciently, she warned that “events in Spain were a prelude to another world war.” Exasperated by the international community’s failure to intervene, she used her reporting to denounce Franco’s brutality and demand help for his victims.

Cunard was especially concerned about those Spaniards who, in fleeing the fascists, landed in concentration camps across the French border. Although 80 percent of these “hundreds of thousands of refugees” were “women and babies and children and old people and cripples and wounded civilians,” rightist French officials, viewing the newcomers as Communist “scum,” offered them only “squalid, often mortal detention.” Camp inmates “had to wait five days for food and were then allotted two ounces of bread and one of rice — for a 48-hour period.” Many starved to death.

In addition to exposing this situation in the international press, Cunard established a shelter where “hot meals were prepared daily for as many as 3,000 to 4,000 people.” She also walked as many as 40 miles to visit the camps. By 1939, these efforts took a toll on her already fragile health and she returned to Paris to convalesce, though not before giving refugees the clothes off her back, “having felt I must leave everything possible to the bombed-out people of Barcelona.” Not long afterward, still unwell, “she stood on the streets of Paris with a sheet spread at her feet, asking for contributions ‘for the starving children in Spain.’ ”

The heiress turned beggar: the image is striking, and Gordon, who avoids sentimentality throughout, judiciously allows it to stand on its own. Similarly, when recounting Cunard’s involvement with an English pro-Resistance group during World War II, Gordon quotes without comment Cunard’s avowed preference for working “six night shifts in a row,” past the point “when ears and eyes give out” and “the spine turns to rubber.” “ ‘Sleep? Warmth? Food? No!,’ ” friends characterized her as saying. “ ‘Somewhere someone was suffering.’ ” Even after the war, she continued her self - abnegating regimen, concluding “that I should own absolutely NOTHING,” and devoting her meager resources to “many crusades.”

Admirable though it was, Cunard’s selflessness contained, according to her intimates, a manic undercurrent that became worse with age. Yet even as she relates Cunard’s decline into severe mental illness (exacerbated by excessive drinking), Gordon does not editorialize. “One night in Frascati, Italy,” she writes, Cunard “emerged drunk and bull-like from a cafe with a cigarette inserted in each nostril and began pelting dogs with tomatoes.” While the unruffled tone of such pronouncements may reflect the author’s refusal to judge (or romanticize) her subject, they also suggest a hesitancy to acknowledge the full extent of Cunard’s appetite for self-destruction.

And self-destruct she did. In 1960, after some drunken scuffles with London authorities, she was declared insane and placed in a mental hospital. In her paranoia, she blamed Spain, the C.I.A. and the British Foreign Office for her confinement. After her release, a destitute Cunard spent five years drinking heavily, eating almost nothing and ranting against bigots (“How I should like to machine-gun the evil whites” ) and fascists (“Damn Spain and all its doings”). In March 1965, just after her 69th birthday, she went on an extended alcoholic binge in Paris. Friends saw with alarm that she “had lost her reason” and looked “thinner than a Buchenwald corpse,” but she eluded them, only to resurface when the police found her unconscious in the streets. She could not remember her own name, and died two days later. Restrained to the end, Gordon quotes Neruda’s plainspoken eulogy: “Her body had wasted away in a long battle against injustice in the world. Her reward was a life that had become progressively lonelier, and a god forsaken death.” But perhaps an even more suitable epitaph comes from Cunard herself: “All that remains is a furious sense of indignation.” Indignation that, however harrowing, the reader cannot help but share.

Caroline Weber, whose most recent book is “Queen of Fashion: What Marie Antoinette Wore to the Revolution,” is a frequent contributor to the Book Review. 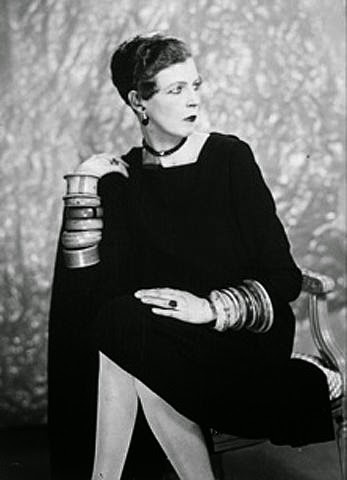 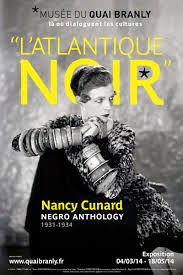