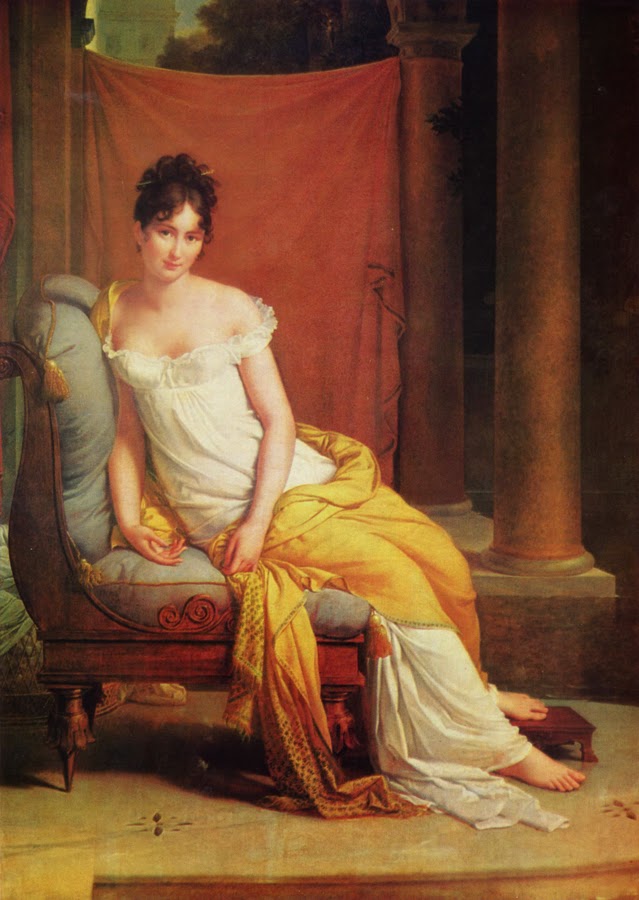 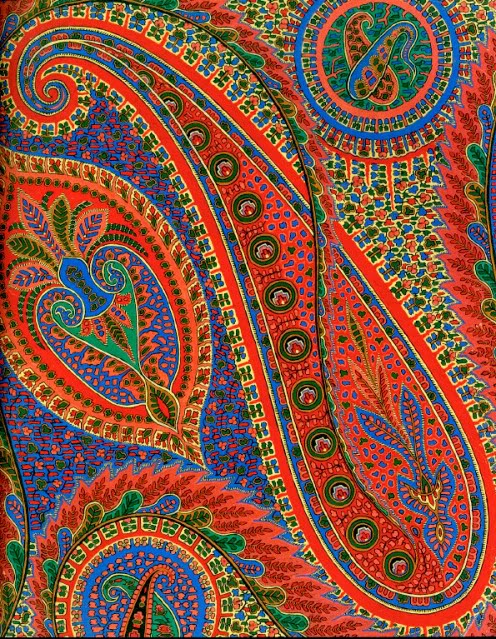 The History of the Paisley Symbol and Paisley Pattern
http://www.paisleypower.com/#!history-of-paisley/c9ar

Origins of the :
It is generally agreed that the paisley symbol originated in 200-650 AD during the rule of the Sassanians who created an empire who's armies kept the Romans at bay for centuries. This empire included what we know roughly as the middle east , the Caucasus and central . Their culture continues to influence Persian identity right up to the present day (see Image 1 - a paisley ornament from Afghanistan C12th-14th). The symbol began to appear on Persian fabrics in the early C16th. Hence an early nickname for paisley shapes, especially by American quilt makers, was “Persian pickles”.
The symbol can be best described as a similar shape to a curving teardrop or a kidney. The symbol was called boteh (the Persian word for shrub or cluster of leaves) which is visually a combination of a spray of floral elements and a cypress tree. Centuries later the shape was called Buta almond or bud - the national symbol of to this day. It could also be an adaptation of the yin-yang symbol used in ancient Chinese medicine and philosophy.
Many different cultures have used the paisley symbol and consider it to represent many objects including a cashew fruit, a mango or a sprouting date palm, an Indian symbol of fertility. The symbol’s shape varies dramatically in different countries from an Indian pinecone to a Russian cucumber.
Paisleys also have their place in Celtic tradition. Before the Roman empire’s influence prevailed in , Celtic patterns were used on many highly-decorated metal objects. The Desborough Mirror, discovered at an archaeological excavation in Northamptonshire in 1908, was made in the Iron Age period in around 50BC to AD50.  This bronze mirror’s complex swirling engraved symbols, very similar to paisley forms, can be seen at The British Museum, .
The paisley pattern evolved mainly in The Kingdom of Kashmir. During Mughal Emperor Akbar's reign (1556–1605), shawl weaving production increased dramatically. It’s weavers absorbing influences coming across the borders from nearby , Middle East and . Woven paisley shawls were mainly worn by men for ceremonies. These early shawls did not display the paisley shape as we know it today but a curving flower with leaves and a stem, the roots of which have striking similarities to Chinese calligraphy. The way in which symbols from different cultures appear in the development of the paisley pattern show how weavers translated artistic influences from imported ceramics, documents, fabrics into their own designs.

The East India Company imported paisley shawls (adapted from the Persian word shal) from Kashmir and to in large quantities from around 1800. The designs were specifically tailored to cater for each regions particular tastes. In the shawls were worn mainly by women not men. The designs might depict exotic scenes of people on elephants riding past palm trees. For the Middle Eastern customers, the curved geometric paisley shape as we know it today was widely used. This was partly due to the Islamic preference not to depict recognisable natural objects.

The French Connection:
Joseph Marie Jacquard introduced the punch card system to looms in in 1804, resulting in the first programmable loom. This and other advances in technlogy during the C19th slowly reduced the high levels of child labour in the textile industries because machinery became larger and more complicated so was unsuitable for childen to operate. Prior to the jaquard loom, a child would sit on top of each loom raising and lowering the heddles. His invention made weaving 25 times faster with obviously dramatic increases in paisley shawl output.
In 1805, Napoleon and Empress Josephine, his frist wife, visited and viewed Jacquard’s new loom and granted the patent resulting in Jacquard receiving a royalty for each loom bought.
Joséphine, the first wife of Napoleon I, reputedly owned hundreds of cahsmere shawls. These Indian and Pakistani shawls were brought back from Napolean's campaigns in countries such as at the beginning of the c.19th. There are many portraits of Josephine wearing shawls similar in style and colour to pic.6 which were the height of fashion and luxury. The creamy ecru colour is the natural colour of the goat's fleece. Pic 7 is an example of a beautifully designed and coloured shawl woven in between 1850-1870.

British shawl production:
Due to their huge popularity in Europe, British production of woven shawls began in , but to a greater extent in the small town of , , hence the name Paisley pattern originated. However this is not an international name for the pattern, it is called Palme in , Bota in , Bootar in and Peizuli in .
Roughly equal quantities of imported Kashmiri and home-produced British shawls were bought in in the mid C19th. The former retained their popularity despite their much higher prices. The main reason being that cashmere is actually hair from a goat and these fine hairs are soft and provide excellent insulation. was therefore prefered to sheep's wool which was regarded as much less luxurious.  Also the superior Kashmiri looms produced fully reversible fabric with many more colours. Initially the British shawls were only 2-colour, usually indigo and madder. At it’s peak from c.1850 -1860 the town of employed 6,000 weavers.

Popularity:
In in the C19th the paisley shawl was the ‘must-have’ accessory of its day, a status symbol worn for important occasions and recorded in numerous portrait paintings. Until photography had become more available in the late 19th centurry, paintings recorded fashion trends. These paintings are now a valuable resource for mapping stages in the development of paisley patterns and variations in shawl shapes and sizes. Ford Maddox Borwn's painting (pic.8) from 1860 shows that even a poor girl on the street selling flowers is wearing the fashion of the day, possibly a gift from a sympathetic passer-by on a cold day. William Holman Hunt's painting The Awakening Conscience (1853 - The Tate Britain, London) shows the woman wearing a red paisley shawl draped around her middle and tied at the front, probably brought back by the man from an overseas trip.


Paisley patterns, intricate dynamic interlocking shapes in exciting colour combinations appealed to a wide market. Wool and silk blended yarns were used in , as Tibetan goat hair down was not readily available. A rather unsuccessful attempt was made to rear cashmere goats in in small herd bred from two imported goats from only produced very small amounts of the underfleece as the British weather wasn't cold enough. The rearing was then abandoned. 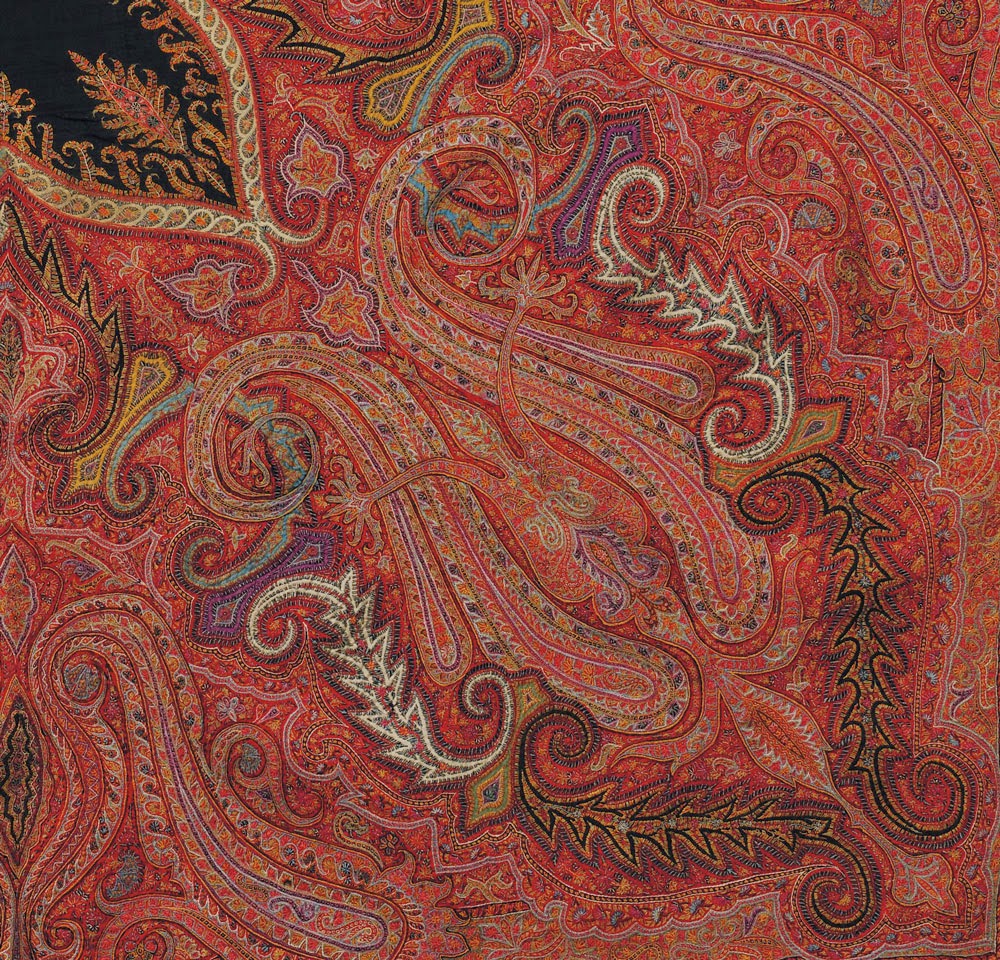 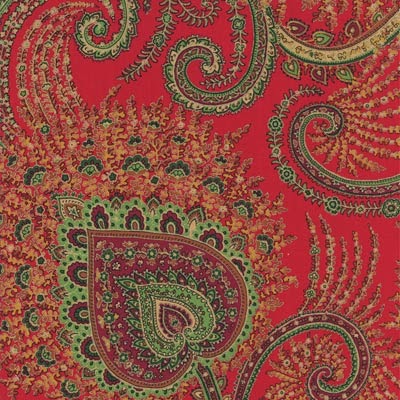 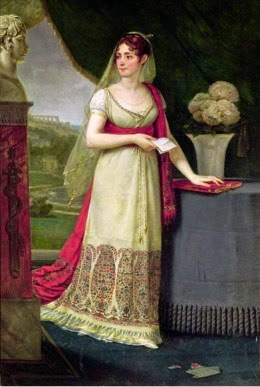 “Ugly and very expensive, but light and warm.” That’s how a disappointed Empress Josephine of (1763-1814) described the shipment of cashmere shawl she had just received to her son, Eugene de Beauharnais (1781-1824). They had arrived from , a gift from you her husband, Napoleon I (1769-1821), whose forces were stationed there from July 1798 until September 1801. From the remote mountains of ’s Kashmir region through , the shawls had traveled to , where Napoleon, along with many of his officers, had bought them.
Know in as a preeminent fashion setter, Josephine continued her letter, “I have serious doubts that this fashion will last.” Only a few years later, however, her tastes had so changed that she would spend as much as 20,000 gold francs for a single shawl, which by that point in time also were known as paisley shawls, the name taken from the distinct motif of the same name.
In 1664, Francois Bernier (1625-1688), the first European to visit , had praised the shawls’ decorations but observed that the shawls were “often infested with worms.” The shawls were woven from the soft undercoat of wild mountain goats deposited in spring on bushes where the animals scratched themselves while shedding their winter coats (other travelers, witnessing the locals gathering the wool from the bushes, thought that it must be a vegetable fiber akin to cotton).
Women in quickly found that cashmere shawls offered not only warmth but also a whimsical splash of color over the plain white neoclassic gowns then in style.
Shortly after the arrival of the first shawls in , cashmere mania had crossed every European border.
In Europe and , many paintings of the period showed women posed in their prized shawls.
Josephine herself amassed more than four hundred shawls, and, as her lady-in-waiting Claire Elisabeth Jeanne de Remusat (1780-1824) recalls, Josephine did not limit herself to draping them over her shoulders or to wearing them as turbans, as in . She had them made into clothes, coverlets, and pillows.
The passion for the shawls inflamed to the extent that some women went so far as to steal them during court events. Laure Junot, duchess d’Abrantes (1784-1838), an insider at the court, told of a cashmere shawl decorated with a parrot motif that, stolen during a ball, turned up weeks later on the shoulders of a woman who had not taken steps to eliminate the rightful owner’s monogram embroidered on the border.
Deemed an exclusive privilege of married women, the cashmere shawl became an important element of wedding trousseaux. Some desperate women tried to persuade their husbands that only the gift of a cashmere shawl could prove their love.
Responding to the European mania for cashmeres, Indian weavers invented new techniques for making shawls more rapidly. It became standard practice to weave a shawl in two pieces, to be sewn together later by an expert rafugar (darner); the Indians also began to embroider the decorations instead of weaving them in, especially the motifs on the four corners.
In , Guillaume Ternaux (1763-1833) began to offer imitations of shawls using similar techniques as well as imported materials and decorations. In 1811, Napoleon commissioned twelve shawls from him for his new wife, Empress Marie Louise (1791-1847); the imperial court painter Eugene Isabey (1803-1886) provided the decorative patterns. Two years later, the French newspaper Moniteur Universel would proudly write, “Ternaux shawls are perfectly manufactured. The fabric has the right strength . . . , the patterns are created by our best artists and are different from the bizarre and confused motifs or foreign shawls.
In England, cashmere shawls were produced in Norwich while the textile industry in Paisley, Scotland, could count on agents in Kashmir to send new designs weekly for the printed (and very economical) copies of the shawls woven in Paisley that were to be found in London stores a week later. Also widely available were Austrian or German printed copies in cheap cotton or wool. Manufacturers began to create smaller shawls for the mass market. One innovation was a patented rectangular shawl decorated with a three-side border on one half and large palm-shaped motifs on the other: two different looks in one shawl, depending on which half was exposed.
In 1823, French merchants regularly traveled to Kashmir and regions to direct the work of the weavers toward European preferences. A few years later, the fad was over. No longer coveted status symbols, worn even by the lower classes, the light and soft stoles of the turn of the century had evolved into rug-like cloaks, described in a least one women’s magazine as “rather ordinary.”
Although seen only rarely in the wardrobe of today’s women, the paisley motif is popular in men’s accessories, china, and ready to-wear, highlighting a significant and lasting example of the exchange between Easter and Western costumes, economy, and culture. 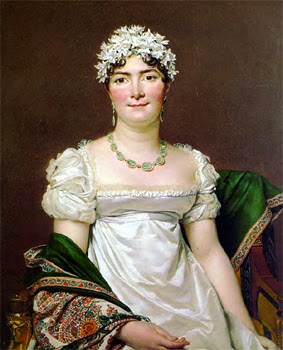 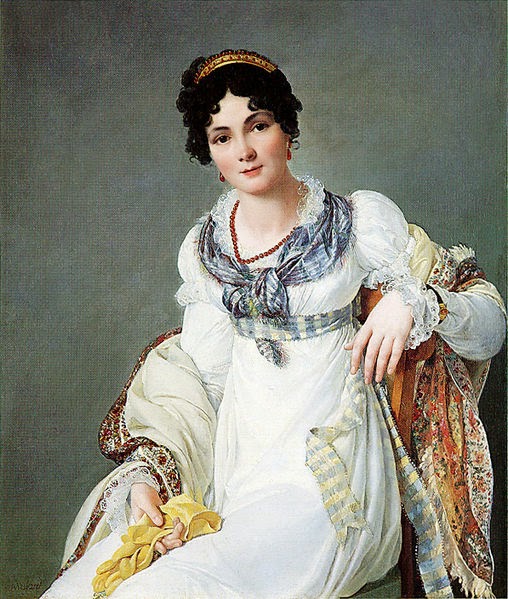 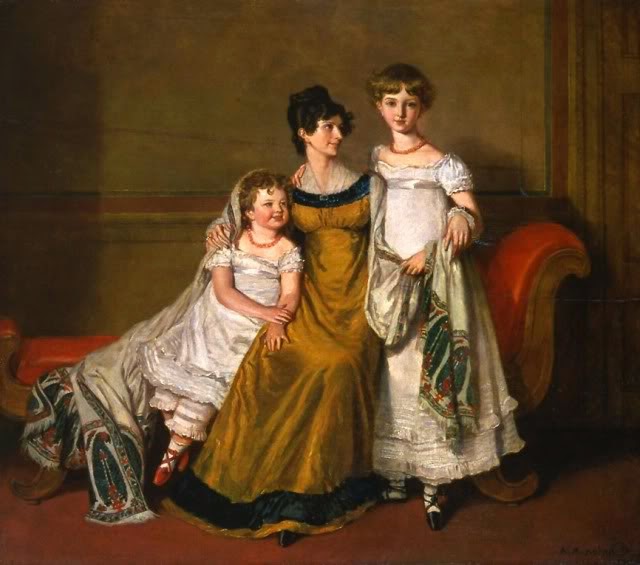