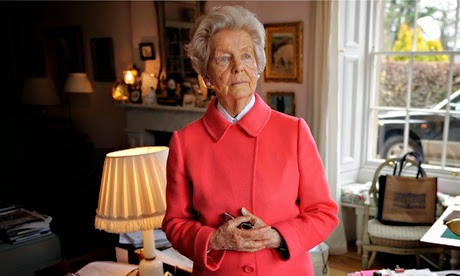 Deborah, the Dowager Duchess of , and the last surviving Mitford sister, has died aged 94.

Her son, the Duke of Devonshire, announced the death in a statement from Chatsworth House, her stately home.

Prince Charles said he was "saddened" by the news, saying he "adored and admired" Deborah and would "miss her so very much".

The Mitford sisters fascinated - and sometimes scandalised - British society in the 1940s.

Unity was a friend of Hitler; Diana, the second wife of British fascist leader Sir Oswald Mosley; Jessica, a left-wing activist, and Nancy, a novelist and historian.

Deborah, like her elder sister Pamela, was more focused on home life.

Nonetheless, along with her siblings, during her lifetime she moved in the same circles as Sir Winston Churchill, John F Kennedy and Evelyn Waugh.

She also accompanied her sister Unity to tea with Hitler in 1937, was painted by Lucian Freud, and amassed a collection of Elvis Presley memorabilia.

Nicknamed the "housewife duchess", she made Chatsworth in Derbyshire one of the most successful and profitable stately homes in after marrying Andrew Cavendish - who later became the 11th Duke of Devonshire - in 1941.

The statement from her son said: "It is with great sadness that I have to inform you that Deborah, Dowager Duchess of , has passed away peacefully this morning."

It added that an announcement about funeral arrangements would be made shortly.

Prince Charles said: "My wife and I were deeply saddened to learn of the death of the Dowager Duchess of , whom both of us adored and admired greatly.

"She was a unique personality with a wonderfully original approach to life, and a memorable turn of phrase to match that originality.

"The joy, pleasure and amusement she gave to so many, particularly through her books, as well as the contribution she made to Derbyshire throughout her time at Chatsworth, will not easily be forgotten and we shall miss her so very much."

Born Deborah Vivien Freeman-Mitford on 31 March 1920, the duchess was the sixth daughter of the 2nd Baron Redesdale.

The Mitfords' childhood at their family home in the Oxfordshire of was immortalised in 's novels, The Pursuit of Love and Love in a Cold Climate.

Her parents made a poor job of hiding their disappointment that Deborah had not been born a boy, leaving Thomas their only son.

The Mitfords' father disapproved of educating girls, famously insisting that hockey would make their ankles fat, and Deborah spent her formative years skating and hunting.

Her sister Unity's infatuation with Hitler saw the young Deborah invited to tea with the German dictator, although the visit made little impression on her.

"If you sat in a room with Churchill," she later recalled, "you were aware of this tremendous charisma. Kennedy had it too. But Hitler didn't - not to me anyway."

At Chatsworth, the Duchess took on a major role in running the house and its garden, which have been used in a number of film and TV productions, and she ran the estate's farm shop.

In July 2002, the duchess and her husband spoke out against the government's proposed ban on fox hunting.

Made a dame in 1999, she became the Dowager Duchess of in 2004 after her husband died and their son inherited his title.

She penned a number of books including the autobiographical Wait for Me: Memoirs of the Youngest Mitford Sister, which was published in 2010. 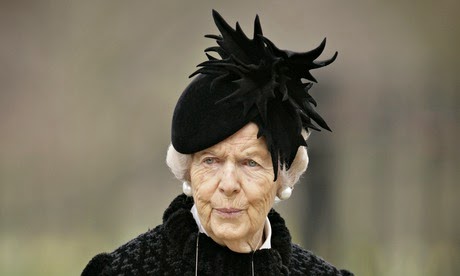 The Dowager Duchess of obituary
Last of the famous Mitford sisters, she became a successful chatelaine of Chatsworth House
Veronica Horwell
The Guardian, Wednesday 24 September 2014 / http://www.theguardian.com/uk-news/2014/sep/24/the-dowager-duchess-of-devonshire

Deborah, Dowager Duchess of , who has died aged 94, was for more than half a century the chatelaine of Chatsworth House, the great stately home and estate in Derbyshire. In that time she did much to promote it as a favourite public destination.

But she started out as the youngest of the Mitford sisters – the country chick of that sophisticated brood, the extraordinary offspring of Lord Redesdale and his wife, Sydney. Although sister Nancy's claim that Debo could imitate a hen expelling an egg might have been a joke, Debo did drive the cart delivering the Mitford henhouse eggs to the station. While , Diana, Unity and Decca pursued literature, fascism, Hitler and socialism, Debo's best friend in childhood was the family's old groom, Hooper, "the human end of the horses; the stables were my heaven".

She was born at Asthall Manor, Oxfordshire, but equine bliss ended at 16 when the Mitfords sold their next country house: at 17, Debo's closest sibling, Jessica – "Decca" – eloped without a word, a letdown slightly ameliorated by the £1,000 libel settlement the Daily Express paid Debo for wrongly naming her as the runaway, which she squandered on a fur coat. She came out as a debutante in 1938 at a ball given by her doting father at the Mitfords' house, and enjoyed the last real season before the second world war. Unity, the Hitler groupie, wrote from : "Swyne [a Debo nickname] seems to be having a wonderful time … who will the romance be with?"

The answer was Lord Andrew Cavendish, also 18, younger son of the Duke of Devonshire, encountered at the races. He joined the Coldstream Guards, while Debo and her mother went to to collect Unity, who had put a bullet through her brain but survived, severely damaged; they coped with Unity's resultant moodiness and incontinence through the first year of war. But then, nothing organic fazed Debo – when travelling to Mull by train, she milked her beloved goat in the first-class waiting room at : "Which I should not have done since I only had a third-class ticket."

Debo wrote to Diana – in Holloway for supporting her fascist husband, Oswald Mosley – about her impending nuptials: "I do wish you weren't in prison. It will be vile not having you to go shopping with, only we're so poor I shan't have much of a trousseau." Debo married Cavendish in the bomb-damaged St Bartholomew the Great, in : "Two houses had been totally destroyed in our street the night before, and all the glass was blown out of our house, so my mother put up wallpaper rolls as pretend curtains and went on with the wedding." She followed him around the country: "I do disgusting work now, do feel sorry for me, it's in the YMCA canteen and it's very embarrassing because they all copy my voice," both its extraordinary vowels and the racy Mitford lingo.

But Debo was never a serious snob, considering class an irritant: "The biggest pest that has ever been invented". Her husband became heir to the dukedom on the death of his brother in 1944 and succeeded unexpectedly early when his father died in 1950, 14 weeks before the date on which the estates would have escaped 80% death duties. The couple inherited a directory of property, principally Chatsworth House, with 175 rooms, 50 of them huge, and a £5m revenue bill incurring £1,000 interest a day. It took 17 years to clear the debt, with failed appeals to the high court and the sale of Rembrandts, a Poussin and superfluous ancestral accommodation, including Hardwick Hall, also in Derbyshire.

In 1959 they moved in "over the shop" at Chatsworth, made over to a trust, and they kept an Irish holiday castle, Lismore. Nancy, a connoisseur of aristocratic chilblains, wrote to Diana: "Debo has become the sort of English duchess who doesn't feel the cold." They transferred to Chatsworth to help repair it for the first round of stately-home-openings. Debo did the decor, the grandest of shabby chic – she continued the house tradition of gold-leafing the exterior window frames, but only because it lasted longer than paint and she liked the glow on gloomy November days.

teased Debo that invitations to writers and artists to stay had more to do with interiors than intellect: "They are terrible wreckers, worse than puppies and will give a mellow old look to the house in no time at all. I expect that's why you have them." Not quite fair, perhaps: the Duke commissioned Lucian Freud to paint Debo's portrait when she was 34 ("That's the dowager duchess; it was taken the year before she died," asserted a visitor); and, although Debo claimed to be no reader and only a letter-writer, there were corridors stacked with Mitford letters, she wrote a history of Chatsworth, an estate shop steady-seller, and a wicked collected journalism volume, Counting My Chickens ... and Other Home Thoughts (2001). She was an unlikely devotee of Elvis Presley, and King memorabilia decorated her Chatsworth office. Such a beauty when young, she said; she had visited his rival stately home, , and thought it very moving.
She was a competent businesswoman ("I am very good at spending money and she is very good at making it," conceded the Duke), managing her share portfolio and the Chatsworth enterprises; hers was the signature printed on the labels of Chatsworth Food Ltd's chutney and Cumberland sauce; she served in the farm shop "until they installed the mechanical till which I was too stupid to operate".

But the estate's 6,000 farmed acres, which Debo could name field by field – Mrs Vickers's Breeches, Big Backsides, Old Zac's Pingle – stimulated her more than the house's silver steward and the 2,000 lightbulbs, which were powered by an updated wonder of Victorian hydraulic engineering. As she aged, she took delight in the continuity of the details in the house, securing her closet every day with a rare late-17th-century lock.

Few other presidents of the Royal Agricultural Society or the Royal Smithfield Club could recite a flock's afflictions as she could – "Orf scrapie, swayback, blackleg, water mouth or rattlebelly, scab and footrot, scad or scald" – or work with a sheepdog, and she appreciated a whippet or two about her feet.

Debo's book Farm Animals (1991) featured rare breeds of fowl, Buff Cochins and Wesummers, which she raised; the Chatsworth farmyard was a teaching aid for cityfolk. She liked to cite the boy from a school in who watched the milking demo. "He gave me such a look and said, 'I think it's the most disgooosting thing I've ever seen in me life, I'm never going to drink milk again."

The Devonshire marriage weathered revelations during an Old Bailey trial in 1985 that the Duke, for all the family motto "secure by caution", had been careless with his chequebooks while furnishing the London flats of young female acquaintances. He was generous to his Duchess, too, over the years commissioning a collection of bejewelled insect brooches, which she wore pinned to ribbons as they left quite dreadful holes in frocks. In 1999 she was made a DCVO, a dame in the Royal Victorian Order. At the 50th anniversary of the couple's accession to the ducal title, Debo swanned into the marquee in a costume created for a Victorian duchess at a 19th-century Chatsworth thrash: she found its whaleboning very supportive.

Following her husband's death in 2004 she remained active as a writer, producing a memoir, Wait for Me!, in 2010. Three of her children died at birth. Her son Peregrine succeeded to the dukedom, and she is also survived by her daughters Emma and Sophia.