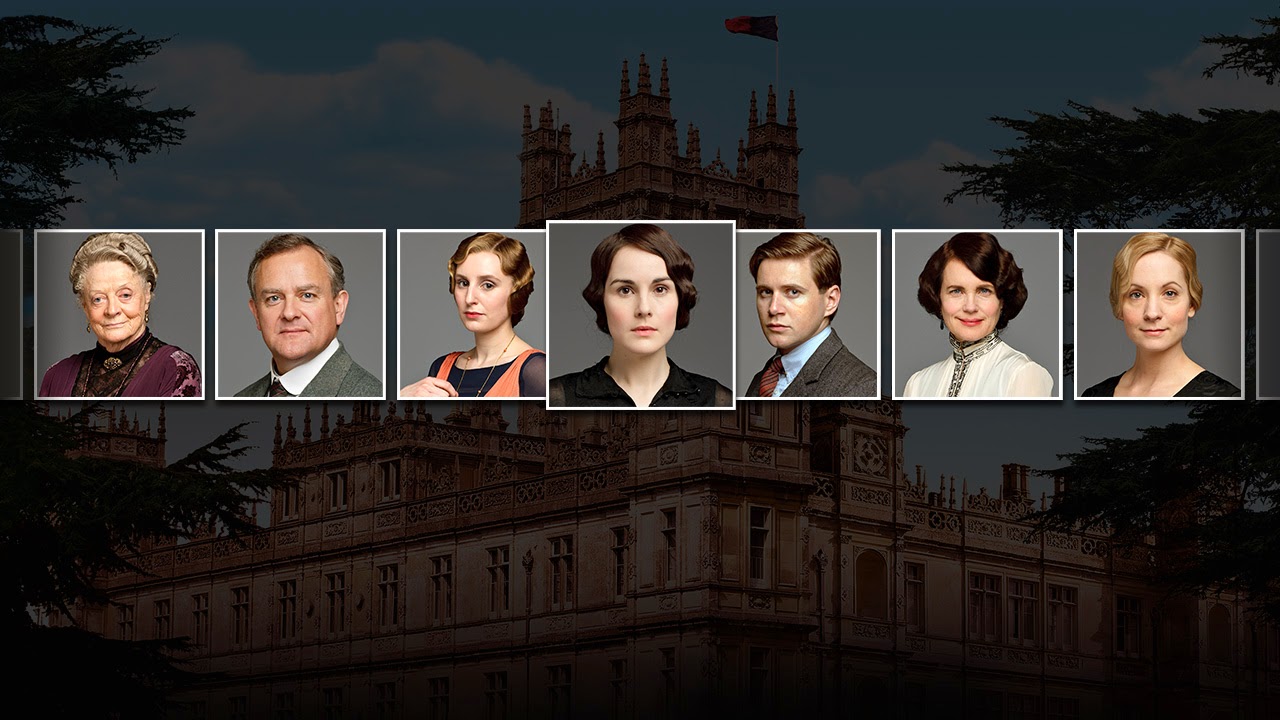 Downton Abbey review – Down There Abbey, more like: they are all sex-mad
The aristocratic Crawley clan are back – and it’s all going on upstairs, downstairs and in my lady’s chamber
Sam Wollaston
The Guardian, Monday 22 September 2014   / http://www.theguardian.com/tv-and-radio/2014/sep/22/downton-abbey-review-sex-mad
Rump of yellow labrador, wagging faithfully towards big cedar and Jacobean-style stately, accompanied by tinkly easy-listening piano and soaring strings. It’s back: Downton Abbey (ITV, Sunday), posh soap – more Howard’s Way than Howards End … I know, I did that one before, but I like it, OK? I’m plagiarising myself.

She (presumably) – the lab – is called Isis, unfortunately. Well, the Crawleys weren’t to know what that would come to mean, 90 years down the road (Downton has now reached 1924). Likewise when they named their (as yet unseen) cat Al Shabaab …

So what’s going on? Dark clouds are gathering. No, not the iClouds with the sex tapes, clouds of change. “I feel a shaking of the ground I stand on,” says poor Carson. Earthquake, is it? Suicide attack by Isis, the caliphate hound? No, just momentous social upheaval. The village wants Carson, not his Lordship, to chair their war memorial committee, and it has put Carson in a fearful tizzy.

On top of that, the country has elected a Labour prime minister, Ramsay MacDonald, son of a farm labourer and a housemaid, who is upsetting the old order, like Carson. The downstairs people are starting to look at those stairs with thoughts of ascending. Even Daisy is considering bettering herself. While above, the toffs are beginning the long slow slide towards irrelevance.

Not that they’re going quietly. “They’ve cast the net wide tonight,” says the Dowager Countess, clinging on with old-lady claws to the past and to every fibre of her own snobbishness, on noticing that a teacher has been invited to dinner. A teacher! Imagine! It gets worse – she, the teacher, Sarah, Tom’s new love interest – has an opinion too, and isn’t afraid to express it, over the soup. A woman, with a brain, and an opinion, who wants a conversation, whatever next? No wonder people are upset. “The nature of life is not permanence but flux,” laments Carson.

“Just so, even if it does sound faintly disgusting,” replies Mrs Hughes. Mrs Hughes! What the … are you suggesting what I think you are, flux without the l?

And that’s not the end of the filth. It seems everyone is having carnal thoughts; if not actually doing sex, then at least waking up to its existence. Even Bates, officially the most sexless man on television, wants in. “I can think of one thing,” he says, when Anna says there’s nothing they can do about not having children. “Mr Bates!” she says, which is presumable what he goes and does, sulkily.

There’s more; this is the sex episode, Down There Abbey. Lady Mary, who still hasn’t decided between her two suitors (zzzzzz), decides the best way to make up her mind about Lord Gillingham is to shag him. Not exactly how she puts it, but it’s certainly what she means. “Even now, we must decide whether we want to spend our lives with someone without spending any real time with them, let alone … you know,” she tells prudish Anna.

This new one too, aristo sex-pest Lady Anstruther (Anna Chancellor, joining briefly), entices James the servant toy boy upstairs. Upstairs, downstairs, in my lady’s chamber, for flux and everything else. Maybe that iCloud was overhead after all; now it’s burst and is raining down a deluge of smut. But then Lady Edith carelessly sets fire to the place, which puts a stop to things before the earth can move again.

“Save the dog,” shouts Lord Grantham. It’s reassuring that he’s thinking of the dog before the servants – the old way isn’t quite over yet. And by the time the fire brigade arrives, Isis has been taken out of the crisis, and is safe and wagging again, on the drive. I’m glad, she’s the only character I care about.