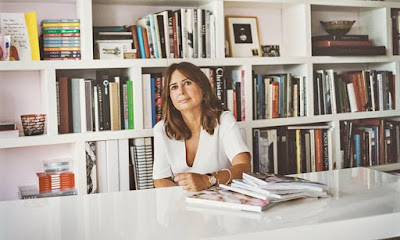 Confirmed for BBC Two on 8 September at 9pm to 10pm
http://www.bbc.co.uk/mediacentre/proginfo/2016/36/absolutely-fashion-1

For the first time in British Vogue’s 100 year history it has allowed TV cameras to film behind closed doors, granting documentary maker Richard Macer unprecedented access to the UK’s style bible, its cover stars, designers, and those who run it, as the magazine prepares to celebrate its centenary.
This candid two-part documentary series uncovers the world of high fashion like never before, giving viewers a fascinating insight into an ever-changing industry. Over nine months, Macer gives us his personal observations as he witnesses how the magazine is put together - from the catwalk shows to front cover shoots.

Fresh from the September 2015 shows, we meet Alexandra Shulman, Editor-In-Chief for the past 24 years. Macer follows Shulman and several of the magazine’s creative heads, including Fashion Director Lucinda Chambers, who has worked there for 36 years, Creative Director Jamie Perlman, and Editor-at-large Fiona Golfar.

Gaining access to shoots with some of fashion’s most iconic figures - Edie Campbell, Mario Testino and Kate Moss, the face of more British Vogue covers than anyone else - Macer soon discovers that neither photographers nor models are particularly comfortable with his camera.

In a significant year for the magazine, with a raft of special events and a bumper centenary issue, the films observe a world not just intent of celebrating the glories of the past, but also facing up to the challenges of an uncertain future. With Instagram and other social media starting to challenge the magazine’s exalted position, can Shulman keep it on top? 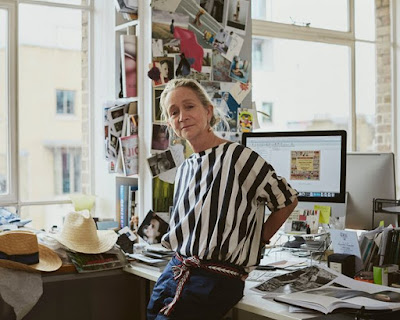 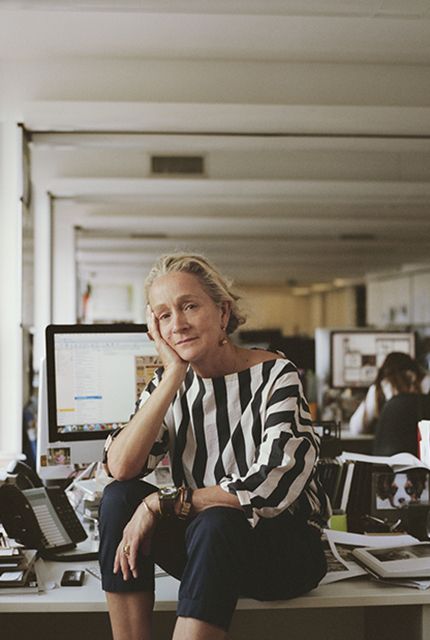 What do the women at Vogue wear? That’s all anyone really wants to know – or, at least, that’s why you’ll be watching, hawk-eyed, throughout a new BBC series about the magazine, Absolutely Fashion: Inside British Vogue. It’s been shot by seasoned director Richard Macer, who observes the magazine’s daily life over nine months with a keen eye and a dry sense of humour, hence the title. It will show what Vogue wears, and what Vogue eats.

Naturally, the office landscape features many clothes and little in the way of food. Rails of Victoria Beckham and padded jackets and Gucci sit alongside all the takeaway coffees (so many!) which appear at desks (white Formica, cluttered with binders, pens and Macs) or on the frow at the fashion shows. Much of the action takes place outside of the office because the fashion industry is a proactive one and as for the coffee, well you need to do something with your hands when a show is delayed by traffic – a phenomenon well documented by Macer – and what with the smoking ban and all ...

Regrettably, there is no sign of Vogue’s fabled “snack table”. Possibly because it’s empty, or doesn’t actually exist. An early cameo from a nectarine (or peach, we’re down to the stone by the time filming starts) blindsides us. Fiona Golfar, editor-at-large, friend to the stars, and the woman who procures the big names, nibbles it very slowly, with the caution of an animal emerging from hibernation. Then we’re back to the coffee.

For the most part, the Vogue style is unfettered. Of course it is – they’re being filmed – and the glamour moves in hierarchical fashion. The editor-in-chief, Alexandra Shulman, moves between brights and darks, a multicoloured striped Gucci jumper (Alexa Chung owns the same) one day, oatmeal cashmere and Gola trainers another. Fashion director Lucinda Chambers is flightier with her style: a lot of Marni, Jil Sander and massive earrings. If you’ve seen the notorious/acclaimed film about US Vogue, The September Issue, where the fashion director, Grace Coddington, stole the show from US editor Anna Wintour, it’s hard not to escape the feeling that Chambers has been cast in the Coddington role here.

Meanwhile, Sarah Harris, fashion features director and rising star of Vogue who let her hair go grey, is more open, giving us a tour of her wardrobe in the second episode. Millions of pairs of jeans. Céline and Manolo Blahnik shoes. Ditto Julia Hobbs, fashion news editor. Her most expensive item? She leans in: “My Prada. Red. Shearling. Coat.” It cost as much as a secondhand Mini. Jaime Perlman, the creative director and breakout star, is far more cool. She talks back to Shulman, wears an exaggerated eyeliner flick, and dresses for herself rather than the cameras. Note the Chloé tracksuit top in the second episode: one of the most discussed pieces of last season. Otherwise the looks are familiar ones: Bardot tops, Breton tops, printed blouses, smart shirts (mainly worn by Shulman’s “gatekeeper” PAs). Take note: there are few Stan Smiths, a staple of other fashion offices.

Shulman dresses like a woman in charge without the bizarre mythology of her US counterpart. Wintour herself appears briefly, and is filmed putting her sunglasses on before being interviewed. Inside. As Macer notes, “appearances can be deceiving” at Vogue. And while it is possible that the Devil might wear Prada, she only does if she can get from A to B in it.

• Absolutely Fashion: Inside British Vogue starts on BBC2 on 8 September at 9pm