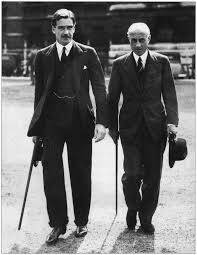 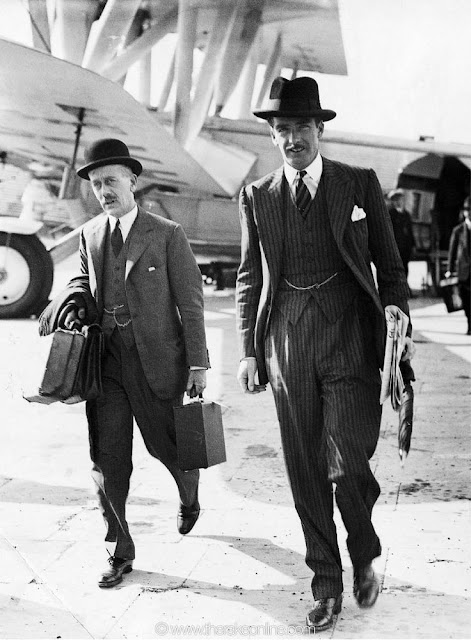 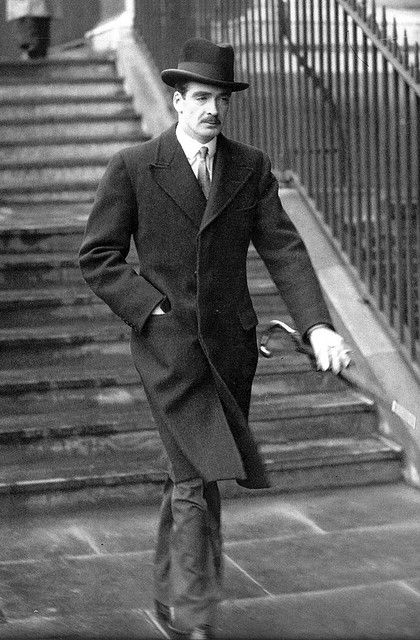 ‘Lounge suit’ is an expression only seen on invitations as a dress code. In conversation the terms dark suit or business suit or possibly business dress or business attire are used.

‘Lounge suits’ for Men
This dress code is used for occasions with various degrees of formality and means a suit worn with a shirt and tie. Lounge suits are worn for most business events, both daytime and evening, and for many social events, such as lunches, receptions, dinner, weddings, christenings and funerals. Dark suits are also correct for flat racing, other than events such as Ascot. They may be worn at dinner parties, especially when people come directly from the office, but are less acceptable at country dinner parties.

A shirt with a turndown (not button-down) collar should be worn with a tie and the top button of the shirt must be done up. The most versatile tie knots are the four-in-hand and the half- Windsor; large Windsor knots should generally be avoided.

Dark suits are still seen on the older rural generation at formal or official events, such as agricultural shows, when there is a luncheon tent for members or notables, and for a day in London.
http://www.debretts.com/expertise/etiquette/dress-codes/lounge-suits/ 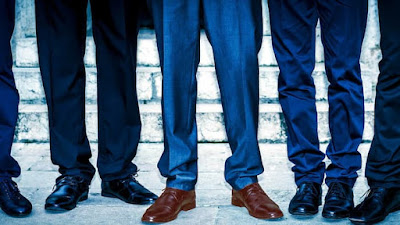 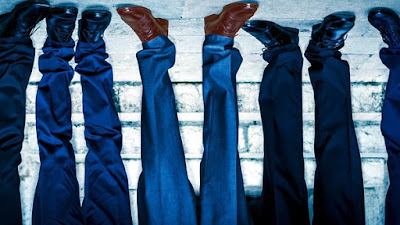 Brown shoes, loud ties and ill-fitting suits have all scuppered the chances of graduates hoping to become investment bankers, according to a report written for the Social Mobility Commission that says “polish” still helps you get ahead in the City of London.

The report, entitled “Socio-Economic Diversity in Life Sciences and Investment Banking”, found that dress codes were still among the “relatively opaque codes of conduct” in the City.

“Issues relating to dress may seem both superficial and relatively simple for individuals from all backgrounds to adopt,” the report says. “However, interviewees suggested that they do play a material role in the selection process as demonstration of ‘fit’.”
One executive told the survey that students from non-privileged backgrounds often wore oversized suits and did not know which tie to wear © Dreamstime

While employers were relaxed about European investment bankers wearing brown shoes, this was generally considered “unacceptable” for their British counterparts. One executive quoted in the survey said students from non-privileged backgrounds often had the wrong hair cut or were wearing an oversized suit. “They don’t know which tie to wear,” the executive said.

An interviewee was advised after an interview that he had performed well but was apparently not the right fit for that particular bank. “He looked at me and said, ‘see that tie you’re wearing? It’s too loud. Like, you can’t wear that tie with that suit’.”

Alan Milburn, a former Labour cabinet minister, was appointed chairman of the Social Mobility Commission by David Cameron, the former prime minister. Mr Cameron’s successor, Theresa May, has also prioritised attempts to improve life chances for people of all backgrounds.

In 2014, a report by the Sutton Trust examined the educational background of 500 leaders and 1,800 new recruits in financial services. It found that 34 per cent of new entrants had attended a fee-paying school, against just 7 per cent of the population. In private equity, some 69 per cent had been to private schools.

The report published on Thursday was written by four academics on behalf of the commission. It made no mention of dress codes for women, saying: “Where issues relating to dress were raised by interviewees, it was almost always in relation to male business attire, underlining the strong association between investment banking and masculinity.”

It further found that successful applicants for the banking industry had far more technical qualifications than those from a generation ago, with graduates in economics, accounting, business, mathematics and engineering doing particularly well.

But it considered evidence that some aspirant bankers could be ruled as unfit on the basis of “speech, accent, dress or mannerisms” — even when they had excellent technical expertise.

Hiring managers considered that these characteristics, summarised as “polish”, reassured clients about their advisers’ expertise and experience.

Clothing was just one element of a wider projection of “cultural competence” including background, family connections and foreign travel, it found.

One executive was quoted saying that applicants would “stick out like a sore thumb” if they did not look comfortable in a suit. “If you’ve got the wrong cut of suit, if you are wearing the wrong shoes, or tie, or you look awkward in a suit, you’re done before you start.”

A young worker in the City said he had gone “into my shell” in his first week because he felt so left out. “They spoke about things I had no knowledge, they started talking about half Windsor tie and a full Windsor tie and all this kind of stuff.”

City executives interviewed for the report seemed largely oblivious about how these rigid dress codes could affect diversity in the Square Mile, the report says.
The Windsor: one young City worker went 'into his shell' when colleagues started talking about the way their ties were knotted

The report also examined the life sciences industry, although it found that data on the educational background of employees was not available. However, it did conclude that the profile of “professional-level scientific jobs” was skewed towards graduates from relatively privileged backgrounds.

This story has been updated to reflect the fact that there was no discussion in the report about dress codes for women.

I saw this article several days ago, and read it with great interest. And why is this such a surprise? It strikes me that universities have done students and graduates a huge disservice by allowing them to believe business and professional life is somehow the same or very similar to one's private life with all that might imply. Getting ahead in working life often requires that people look and act, I'll say it, BETTER than they might at home. It strikes me as a very simple problem to address simply by printing and handing out acceptable business dress codes, with plenty of examples in pictures, of what is acceptable wear in The City and what is not. A company's Human Resources office could also set up and offer routine seminars in etiquette training (both in the office and at the dining table) for its young hires. The hiring managers could also mention to potential short list job candidates that they will need to dress and conduct themselves in accordance with the company's accepted policies as representatives of that company who interact with the public and other business associates behind the scenes. There is really nothing wrong with having a company culture like this, just like there is nothing wrong with, at least in theory (I don't buy into it), having an ultra-casual company culture like one finds in Silicone Valley in the United States for instance. But a young person should hardly be surprised if they don't get the job, university credentials not withstanding, because he or she continues looking and or acting as though raised, if not in a barn, then without awareness of how to get, keep, and behave in a PROFESSIONAL white collar situation. You put your best foot forward in all senses all of the time during business hours when you are on the company clock. One must learn how to walk the walk and talk the talk as an adult if he or she did not get that sort of grooming during the formative years. Doing so is difficult but not impossible. Again, as a representative of a company or firm, bank, legal, or other type, people must be able to conduct themselves in a way that is in accordance with their employer's image. If that is unsavory, job-seekers are always free to apply elsewhere. Goodness knows there are plenty of offices these days where ratty fleece pull-overs, backwards baseball hats, pajama bottoms, and barely concealed belching are de rigueur in 2016. Who would you rather have handling your business and accounts?