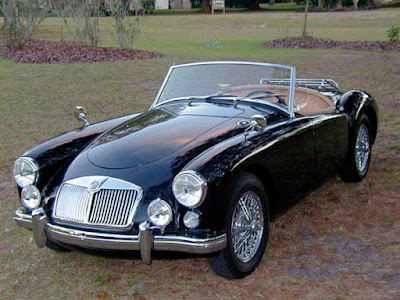 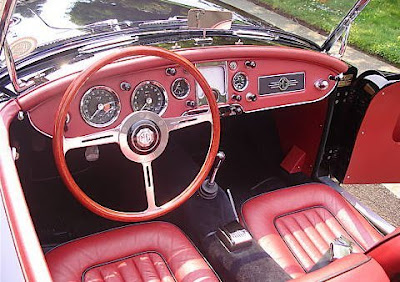 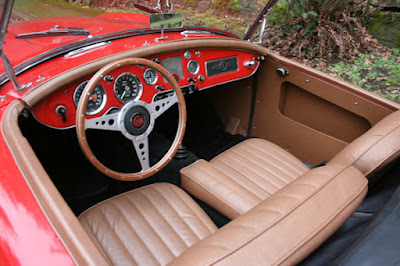 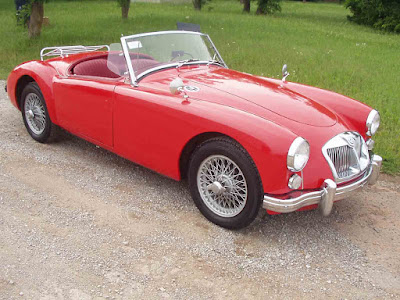 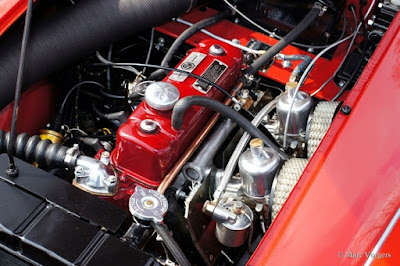 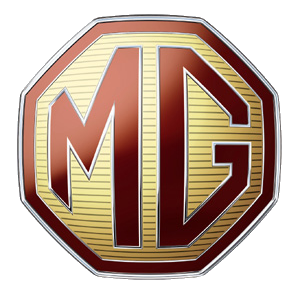 The MGA replaced the MG TF 1500 Midget and represented a complete styling break from MG's earlier sports cars. Announced on 26 September 1955 the car was officially launched at the Frankfurt Motor Show. A total of 101,081 units were sold through the end of production in July 1962, the vast majority of which were exported. Only 5869 cars were sold on the home market, the lowest percentage of any British car. It was replaced by the MGB.

The MGA design dates back to 1951, when MG designer Syd Enever created a streamlined body for George Philips' TD Le Mans car. The problem with this car was the high seating position of the driver because of the limitations of using the TD chassis. A new chassis was designed with the side members further apart and the floor attached to the bottom rather than the top of the frame sections. A prototype was built and shown to the BMC chairman Leonard Lord. He turned down the idea of producing the new car as he had just signed a deal with Donald Healey to produce Austin-Healey cars two weeks before. Falling sales of the traditional MG models caused a change of heart, and the car, initially to be called the UA-series, was brought back. As it was so different from the older MG models it was called the MGA, the "first of a new line" to quote the contemporary advertising. There was also a new engine available, therefore the car did not have the originally intended XPAG unit but was fitted with the BMC corporate B-Series type allowing a lower bonnet line. The MGA convertible had no exterior door handles, however the coupe has door handles.

It was a body-on-frame design and used the straight-4 "B series" engine from the MG Magnette saloon driving the rear wheels through a 4-speed gearbox. Suspension was independent with coil springs and wishbones at the front and a rigid axle with semi-elliptic springs at the rear. Steering was by rack and pinion. The car was available with either wire-spoked or steel-disc road wheels. 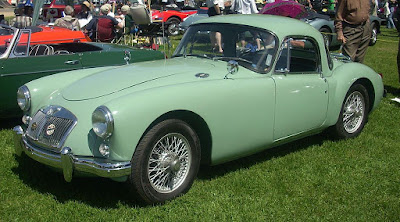 The 1489 cc engine fitted with twin H4 type SU Carburettors produced 68 hp (51 kW) at first, but was soon uprated to 72 hp (54 kW). Lockheed hydraulic drum brakes were used on all wheels. A coupé version was also produced, bringing the total production of standard MGAs to 58,750. 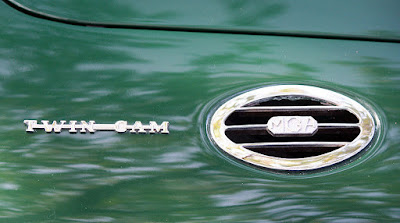 A high-performance Twin-Cam model was added for 1958. It used a high-compression (9.9:1 later 8.3:1) DOHC aluminium cylinder head version of the B-Series engine producing 108 hp (81 kW; 109 PS). Due to detonation problems, a 100 bhp (75 kW; 101 PS) low-compression version was introduced later. Four-wheel disc brakes by Dunlop were fitted, along with Dunlop peg drive knock-off steel wheels similar to wheels used on racing Jaguars, unique to the Twin-Cam and "DeLuxe" MGA 1600 and 1600 MkII roadsters. These wheels and chassis upgrades were used on a small number of the "DeLuxe" models built after Twin-Cam production came to a halt. Aside from the wheels, the only outside identifier was a "Twin-Cam" logo near the vent aside the bonnet. A careful look at the rear wheel vents would also reveal another feature unique to Twin-Cam and DeLuxe: those 4 wheel Dunlop disc brakes mentioned above.

The temperamental engine was notorious for warranty problems during the course of production, and sales dropped quickly. The engine suffered from detonation and burnt oil. Most of the problems with the Twin-Cam engine were rectified with the low-compression version, but by then the damage had been done. Many restored Twin-Cams are running more reliably today than they ever did during production. The Twin-Cam was dropped in 1960 after 2,111 (2,210 according to some) had been produced. Production ended in April 1960, but had slowed to a trickle long before.

Oddly, an open MGA Twin Cam (Reg. No.PMO 326)road tested by The Autocar magazine and published on 18 July 1958 only recorded a 0-60 time of 13.3secs with the Standing quarter mile of 18.6secs. The mean maximum speed was 113.5 mph, with a best of 114.0 mph. So the explanation must be that either their car was down on power, or that a mistake was made when recording the acceleration figures. 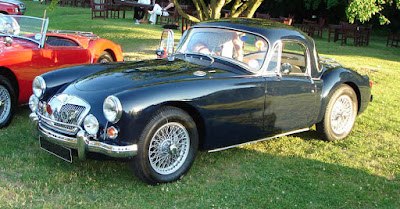 Externally the car is very similar to the 1500 with differences including: amber or white (depending on market) front turn indicators shared with white parking lamps, separate stop/tail and turn lamps in the rear, and 1600 badging on the boot and the cowl.

A number of 1600 De Luxe versions were produced with leftover special wheels and four-wheel disc brakes of the departed Twin-Cam, or using complete modified Twincam chassis left redundant by the discontinuance of that model. Seventy roadsters and 12 coupés were built. 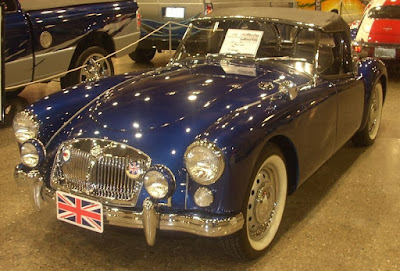 The engine size was increased again to 1622 cc by increasing the bore from 75.4 mm (2.97 in) to 76.2 mm (3.00 in) for the 1961 Mark II MGA. The cylinder head was also revised with larger valves and re-engineered combustion chambers. Horsepower increased to 90 bhp. It also had a higher ratio 4:1 rear axle, which made for more relaxed high-speed driving. An inset grille and Morris Mini tail lamps appearing horizontally below the deck lid were the most obvious visual changes. 8,198 Mark II roadsters and 521 coupés were built.