Getting Dressed in the 18th Century - Men

Overview
Throughout the period, men continued to wear the coat, waistcoat and breeches of the previous period. However, changes were seen in both the fabric used as well as the cut of these garments. More attention was paid to individual pieces of the suit, and each element underwent stylistic changes. Under new enthusiasms for outdoor sports and country pursuits, the elaborately embroidered silks and velvets characteristic of "full dress" or formal attire earlier in the century gradually gave way to carefully tailored woollen "undress" garments for all occasions except the most formal. This more casual style reflected the dominating image of "nonchalance." The goal was to look as fashionable as possible with seemingly little effort. This was to be the new, predominant mindset of fashion. Coats
The skirts of the coat narrowed from the gored styles of the previous period. Waistcoats extended to mid-thigh to the 1770s and then began to shorten. Waistcoats could be made with or without sleeves.

As in the previous period, a loose, T-shaped silk, cotton or linen gown called a banyan was worn at home as a sort of dressing gown over the shirt, waistcoat, and breeches. Men of an intellectual or philosophical bent were painted wearing banyans, with their own hair or a soft cap rather than a wig.

A coat with a wide collar called a frock coat, derived from a traditional working-class coat, was worn for hunting and other country pursuits in both Britain and America.

Shirt and stock
Shirt sleeves were full, gathered at the wrist and dropped shoulder. Full-dress shirts had ruffles of fine fabric or lace, while undress shirts ended in plain wrist bands.[2]

Breeches, shoes, and stockings
Knee-length breeches fitted snugly and had a fall-front opening.

Low-heeled leather shoes fastened with buckles were worn with silk or woollen stockings. Boots were worn for riding. The buckles were either polished metal, usually in silver—sometimes with the metal cut into false stones in the Paris style—or with paste stones, although there were other types. These buckles were often quite large and one of the world's largest collections can be seen at Kenwood House.

Hairstyles and headgear
Wigs were worn for formal occasions, or the hair was worn long and powdered, brushed back from the forehead and "clubbed" (tied back at the nape of the neck) with a black ribbon. Wigs were generally now short, but long wigs continued to be popular with the older generation. Wigs were made with a lot of white powder. 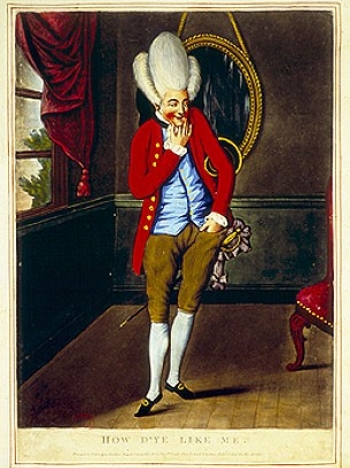 The macaroni
The trend of the macaroni grew out of the tradition of those who partook of the Grand Tour. Elite men in the 18th century would travel abroad across Europe, namely Italy, to broaden their cultural depth. These men adopted foreign fashions and tastes and brought them back to England where they interpreted them further. The original macaroni of the 1760s was characterized by elaborate dress consisting of short and tight trousers, large wigs, delicate shoes and small hats. As the general population of English males became exposed to the luxurious appeal of the macaroni trend, they began to adopt and replicate the trends they saw. By the 1770s, any man could appear as if they themselves had been on the Grand Tour-based solely on their outward appearance.

The macaroni and the subsequent imitators were criticized for being gender ambiguous and effeminate. Frequently, the macaroni fashion trend was the subject of satirical caricatures and pamphlets. Their large costume like wigs and short coats, which deeply contrasted the masculine British dress of the time, were ridiculed for their frivolity and were said to be threatening the stability of gender difference, thereby undermining the nation's reputation. The question of farce and inauthenticity comes into play as well because by dressing as a macaroni, one claimed the status and the means of an elite who went on the Grand Tour.

Although many mocked the macaroni for their outwardly eccentric characteristics, some celebrated them for their commitment to the demonstration of personal identity. The idea of a unique character was becoming an important concept that spanned many types of media including books and prints as Britain wanted to distinguish itself from France.