Remembering Ninalee Craig and the ‘American Girl in Italy’ 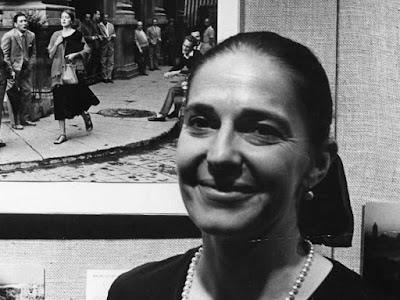 In 1951, Ninalee Craig, then using the name "Jinx Allen", went on a six-month tour of Europe. While in Florence, Italy, she met photographer Ruth Orkin and the two became friends. Orkin photographed Craig as she walked around Florence capturing images of her shopping at markets, flirting in cafés, viewing landmarks, and other travel experiences. The most iconic of the photos is known as American Girl in Italy and shows Craig walking down a street being ogled by a group of men.
Many interpret the photograph as one of harassment and chauvinism.[6] In 2014, Craig said: "At no time was I unhappy or harassed in Europe". "[The photograph is] not a symbol of harassment. It's a symbol of a woman having an absolutely wonderful time!" She has also noted that "Italian men are very appreciative, and it's nice to be appreciated. I wasn't the least bit offended."
Later life
After her trip, Craig returned to New York City and worked as a teacher and an ad writer. She was married to an Italian and lived with him in Milan, but later divorced. After returning to New York, she met a Canadian man, married him, and moved to Toronto. She had a large extended family, including 10 grandchildren and seven great-grandchildren.

Ninalee Craig: The woman made famous by the ‘American Girl in Italy’ photos

‘American Girl in Italy’ has adorned the walls of homes for generations. For its subject, Ninalee Craig, it was a symbol of a woman having a wonderful time

In August 1951, at a dollar-a-night hotel in Florence, two American women came face-to-face in the hallway one morning.

One was Ruth Orkin, a promising 29-year-old photojournalist who was seeking a subject for a magazine photo spread about the experiences of women travelling abroad alone – a rare thing to do at the time.

The other was Ninalee Allen, a 23-year-old adventure-seeking graduate of Sarah Lawrence College who had been travelling solo for months through France, Spain and Italy. She called herself “Jinx” because she thought it sounded exciting.

“She was beautiful, luminescent and, unlike me, very tall,” Orkin later told The New York Times. Allen agreed to the photo shoot as a lark, and off they went through the streets of Florence.

Imagining she was Beatrice from Dante’s Divine Comedy, one of her favourite books, Allen held her shawl, stood straight and strode past more than a dozen men leering at her from all directions at the corner of Piazza della Repubblica.

Orkin ran ahead, Allen recalled, and “took one picture, asked me to back up, and took a second. That’s all that was done at that location, two pictures.” It took about 35 seconds.

“I spoke only to the two men on the motor scooter,” she said 1995. “I yelled to them to tell the others not to look at the camera.”

In less than one minute, Orkin had captured what would become one of the more indelible photographs of the era: “American Girl in Italy”.

The photo appeared in Cosmopolitan magazine as part of a 1952 photo essay entitled “When You Travel Alone...” and included advice on “money, men and morals to see you through a gay trip and a safe one”.

The caption with the photo of Allen read: “Public admiration … shouldn’t fluster you. Ogling the ladies is a popular, harmless and flattering pastime you’ll run into in many foreign countries. The gentlemen are usually louder and more demonstrative than American men, but they mean no harm.”

Over the decades, the photo was reprinted and hung in dorm rooms, became artwork for homes, appeared in calendars and on postcards and, to some, captured the reality of street harassment or cat-calling long before it was part of the public consciousness. One man, with his hand over his crotch, was airbrushed out in some reproductions.

“Oh, and that poor soul touching himself? I was used to it,” Allen wrote in The Guardian in 2015 under her married name, Ninalee Craig. “It was almost like a good luck sign for the Italian man, making sure the family jewels were intact. When it was first published, that was occasionally airbrushed out but I would never consider it to be a vulgar gesture.”

The photograph invited many interpretations, each adding to its meaning and power. It accompanied stories about harassment, victimhood and the female psyche. In November 2017, a restaurant in Philadelphia removed the photograph after complaints from customers.

It all began to grate on Craig, who said the image represented nothing more than admiration and curiosity and was “a symbol of a woman having an absolutely wonderful time”. That she stood six feet tall, she added, may also have explained the gawking.

“Women look at that picture and feel indignant, angry,” she said. “They say, ‘That poor woman. We should be able to walk wherever we want to and not be threatened.’ As gently as I can, I explain I was not feeling fear. There was no danger because it was a far different time.”

Craig, who has died in Toronto aged 90, went on to marry a Venetian count and a Canadian steel industry executive.

Born Ninalee Allen in Indianapolis in the late Twenties, her father was the personnel director for LS Ayres, a department store, and her mother was a home-maker. She studied art history at Sarah Lawrence in Bronxville, New York, and graduated in 1950.

After her months-long travels in Europe, she settled in New York City and became a copywriter at the J Walter Thompson advertising company.

One day, she wrote in The Guardian, she saw the Orkin photo “blown up in Grand Central Station, used as part of a promotion by Kodak, which horrified my father. He had no idea I was walking around Italy in that way.”

She married Achille Passi, a widowed Venetian count, in 1959, and raised her stepson. She lived in the Passi family villa in Treviso, near Venice, and once described his family as a “very old family where you’re only in the newspaper twice in your life – once when you’re born and once when you die. Period.”

Nine years after the photo of her appeared in Cosmopolitan, it ran in a Time-Life picture book about Italy. The caption identified her, and her mother-in-law was “apoplectic”, Craig said in 1995. The man on the scooter who appears to be gazing at her backside was a cousin of her husband. Her name was not included in future publications, at the Passi family’s request.

After divorcing Passi in the 1970s, she returned to New York and met Robert Ross Craig. In a freakish coincidence, he also had a connection to the Orkin photo: he knew one of the two men sitting on the scooter parked near her. “My God,” he told her, “that’s my business partner in Italy. That’s Carlo Marchi!”

They were married from 1978 until his death in 1996. In addition to her stepson, of Venice, survivors include three stepsons from her second marriage; 11 grandchildren; and nine great-grandchildren.

Craig remained close friends with Orkin, who died in 1985 after a noted career in photography and filmmaking.

“I wouldn’t say the picture has changed my life but I’ve had so much amusement from it over the years,” Craig wrote in 2015. “And more free meals at Italian restaurants than you’ll ever know.”