Accessibility at Acropolis of Athens sparks row in Greece

An online petition signed by 3,500 people calls for the concrete pathways to the Acropolis to be removed. 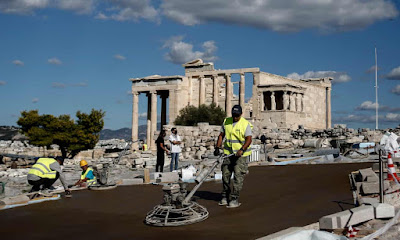 When seen through the eyes of Manolis Korres, the architect who has long presided over the restoration of the Parthenon, the Acropolis needs no improvement at all.

In the face of such architectural mastery, he thinks of himself more as a maestro of order, making a monument that has survived explosions, fire, looting and earthquakes more understandable to the public.

“Many generations of scholars have tried to bring order to this chaos, myself included,” he said, while taking in the maze of marble slabs and scaffolding-encased ruins around him. “The issue is to safeguard what is here. In a hospital you have to take care of patients, for me the patients are stones.”

The wiry professor, a world-renowned authority on the fifth century BC site and current head of the Acropolis Monuments Conservation committee, is regarded as a national treasure in Greece. No man, say supporters, knows more about the Periclean treasure, or the sacred rock on which it stands.

But at 73, 70 years after he was first taken as a child on the shoulders of an uncle to visit the temples, the architect has also come under criticism for interventions conducted during lockdown and deemed to have gone too far.

The installation of a new pathway paved in reinforced concrete across much of the hill’s open space in the name of facilitating people with disabilities has been met with dismay. So, too, has Korres’ proposed plan to overhaul the ancient citadel’s majestic gateway, or Propylaia, by reinstating a Roman staircase that would both broaden the entrance, correct previous erroneous interventions and return it to some of its original form.

Critics complain that both pander to mass tourism rather than saving the site from the ravages of time.

Prior to the pandemic, about 3.5 million tourists made the ascent to see the Acropolis, the country’s most visited site.

In the six months that the temples were closed to the public on account of Covid-19, a new lift capable of carrying two wheelchairs at a time was also installed on the rock’s northern flank, replacing an older elevator that had ceased to operate years ago. That, too, has been criticised as a modernist eyesore.

The alterations – the most significant on the site for more than a century – replace an older pathway that followed the ancient Panathenaic way and was much narrower in size. Opposition has been fierce. More than 3,500 signatories have endorsed an open letter on the online activist network Avaaz calling for the pathways to be removed and other projected changes to be cancelled. Following the completion of the corridors on the northern and eastern area of the site, plans are afoot to extend the walkways west and south.

“It’s as if the Parthenon itself has been lowered to street level and surrounded by a cement pavement,” said Despoina Koutsoumba, president of the Association of Greek archaeologists. “There has been a great deal of pressure, especially from the cruise industry, to increase visitor capacity so that even larger crowds can be accommodated.”

Dr Tasos Tanoulas, until recently director of restorations at the Propylaia, also deplored the decision to cover so much of the rock’s face with reinforced concrete, saying the move would lead inexorably to “degradation of the natural landscape and a devaluation of the rock as a natural monument in its own right, as a natural fort”. In a letter to World Heritage Watch – the Berlin-based body established to ensure that prime sites are not sacrificed to economic interests – Tanoulas argued the alterations appeared to “compete with and diminish” the architectural and sculptural splendour of the monuments.

Yannis Hamilakis, a professor of archaeology and modern Greek studies at Brown University, went further, saying the changes amounted to “a scandal of global proportions” given the monument’s significance as a world heritage site.

“The most scandalous thing, perhaps, is that these works have been carried out without prior systematic study,” he said. “They’re clearly an attempt to recreate an imagined fifth century BC Acropolis, a neo-classical colonialist and nationalist dream which converges with the government’s agenda for further commercialisation of the site.”

If proof were needed, he said, the French designer Christian Dior will be among the first to take advantage of the new expanded pathways with a fashion shoot on the Acropolis next week.

But the changes have also won praise, and according to Korres, have the added advantage of being ‘reversible’. “What we have done is patch rock destroyed by the vicissitudes of time. We didn’t have the freedom to use flagstones or other materials because they weren’t used in the past but, if desired, all this surface,” he said pointing to the paving, “could be removed in a day because of the membrane underneath.”

Greece’s culture minister, Lina Mendoni, a respected archaeologist herself, defended the measures, saying they had been ratified at multiple levels, including the powerful central archaeological council Kas. “They’ve all been approved by people whose credibility cannot be disputed,” she said during a tour of the site. “Since 2004 [when Athens held the Olympic Games] we’ve been talking about improving access for people with disabilities.”

Each year about 150 people are seriously injured negotiating the outcrop’s slippery limestone surface, she revealed. “Many break legs. Each incident is recorded in the site’s logbooks. Whatever you do on the Acropolis ignites debate. If you don’t do anything, you’re criticised; if you do, you’re criticised.”

Tour guides gathered around the monument’s ticket booths on Wednesday agreed the new pathways were overdue. “There are ambulances up here at least four times a week,” said Athina Pitaki who has been guiding visitors around the site since 1978. “I’ve been up here long enough to see all the changes and in reality it’s much better now. It hasn’t affected the monuments. They’re still as impressive as ever and for the first time people can enjoy them without always fearing they’re about to fall.”

Korres knows he is in for a fight. Flooding at the site described as “a predictable consequence” of the new paving following heavy rains last December has intensified the outcry. Critics, led by Dr Tanoulas, claim it would be impossible to detach the reinforced concrete because it would require mechanical means and damage the rock.

But it is controversy the amiable professor appears to relish. “A hilltop can’t flood,” he smiles. “Any intervention raises the issue of aesthetics and is a controversial process. It’s always about weighing what is gained and what is lost.”