The Jaguar E-Type, or the Jaguar XK-E for the North American market, is a British sports car that was manufactured by Jaguar Cars Ltd between 1961 and 1975. Its combination of beauty, high performance, and competitive pricing established the model as an icon of the motoring world. The E-Type's claimed 150 mph (241 km/h) top speed,[4] sub-7-second 0 to 60 mph (97 km/h) acceleration, unitary construction, disc brakes, rack-and-pinion steering, and independent front and rear suspension distinguished the car and spurred industry-wide changes. The E-Type was based on Jaguar's D-Type racing car, which had won the 24 Hours of Le Mans for three consecutive years beginning in 1955, and employed what was, for the early 1960s, a novel racing design principle, with a front subframe carrying the engine, front suspension and front bodywork bolted directly to the body tub. No ladder frame chassis, as was common at the time, was needed and as such the first cars weighed only 1315 kg (2900 lb). 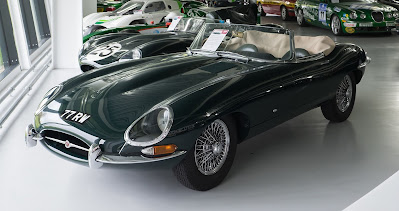 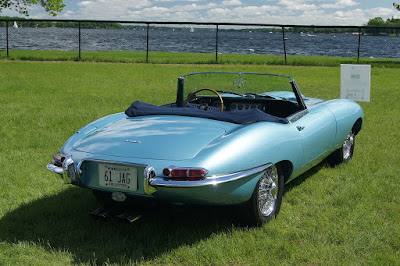 On its release on 15 March 1961 Enzo Ferrari called it "the most beautiful car ever made". In 2004, Sports Car International magazine placed the E-Type at number one on their list of Top Sports Cars of the 1960s. In March 2008, the Jaguar E-Type ranked first in The Daily Telegraph online list of the world's "100 most beautiful cars" of all time. Outside automotive circles, the E-type has featured in the Diabolik comic series, Austin Powers films and the television series Mad Men.

The E-Type was introduced as a rear-wheel drive grand tourer in two-seater coupé form (FHC or Fixed Head Coupé) and as a two-seater convertible "roadster" (OTS or Open Two Seater). A "2+2" four-seater version of the coupé, with a lengthened wheelbase, was released in 1966.

Later model updates of the E-Type were officially designated "Series 2" and "Series 3", and over time the earlier cars have come to be referred to as "Series 1." As with other partly hand made cars of the time, changes were incremental and ongoing, which has led to confusion over exactly what a Series 1 car is. This is of more than academic interest, as Series 1 E-Types—and particularly Series 1 roadsters—often have values in excess of Series 2 and 3 models.

The Series 1 cars essentially fall into two categories: Those made between 1961 and 1964, which had 3.8-litre engines and,on all but very last cars, partial synchromesh transmissions, and those made between 1965–1967, which increased engine size and torque by around 10% to 4.2 litres, and also provided new reclining seats, an alternator in place of the dynamo, an electrical system switched to negative earth, a more reliable brake servo, and other modern amenities. Styling was unchanged.

As a result, the 4.2-litre Type 1 generally became the most valuable form of the car. However, as of the end of 2014, the most expensive regular production Jaguar E-Types sold at auction included a 4.2-litre Series 1 roadster, with matching numbers, original paint and interior, under 80,000 original miles, and a history of being in the original buyer's family for 45 years, for $467,000 in 2013, and a 3.8-litre 1961 "flat floor"[clarification needed] Series 1, for $528,000 in 2014. Special run racing lightweights go for far more still. For example, a 1963 E-type Lightweight Competition advertised as very original and with much patina (wearing the "factory installed interior and bodywork showing the patina of decades of use," although it was re-painted and has a non-matching numbers - albeit factory provided - engine), one of just twelve that were built, sold for $7,370,000 at the 2017 Scottsdale, Arizona auctions.

Being a British-made car of the 1960s, there are some rather rare sub-types of Series 1 E-Types, particularly at the beginning and end of the Series 1 production. For example, the first 500 Series 1 cars had flat floors and external bonnet latches. At the close of the Series 1 production run, there were a small number of cars produced that are identical in every respect to other Series 1 units (including triple SU carbs, button actuated starter, toggle switches, etc.), except that the headlight covers were removed for better illumination. It is not known exactly how many of these Series 1 cars (sometimes referred to as for convenience sake as "Series 1.25," but per Jaguar, Series 1) were produced, but given that 1,508 Series 1 roadsters were produced worldwide for 1967, combined with the fact that these examples were made in just the last several months of Series 1 production, means that these, like the flat floor examples that began the Series 1 production run, are the lowest volume Series 1 variant, save of course for the special lightweights.

While the 1968 Series 1.5 cars maintained the essential design of the Series 1 models, US emission regulations saw its triple SU carburetors replaced there with twin Zenith-Stromberg units, resulting in a drop in claimed horsepower from 265 to 246 and torque from 283 to 263.

Of the "Series 1" cars, Jaguar manufactured some limited-edition variants, inspired by motor racing:

The "'Lightweight' E-Type" initiated and designed for competition was intended as a racing follow-up to the D-Type. Jaguar planned to produce 18 units but ultimately only a dozen were reportedly built. Of those, two have been converted to low drag form and two others are known to have been crashed and deemed to be beyond repair, although one has now been rebuilt. These are exceedingly rare and sought after by collectors. *The "Low Drag Coupé" was a one-off technical exercise which was ultimately sold to a Jaguar racing driver. It is presently believed to be part of the private collection of the current Viscount Cowdray. In 2014, Jaguar announced its intention to build the remaining six lightweights, at a cost of approximately £1 million each.

Safety and emissions regulations in the North American market resulted in Series 2 and 3 E-Types being fitted with a larger grille, wider wheel arches, and bigger bumpers. And they were also fitted with a bigger radiator and cooling system because the Series 1 were notorious for overheating

The New York City Museum of Modern Art recognised the significance of the E-Type's design by William Heynes, Jaguar design chief,in 1996 by adding a blue roadster to its permanent design collection, one of only six automobiles to receive the distinction.The MoMA XKE is a Series 1 roadster.