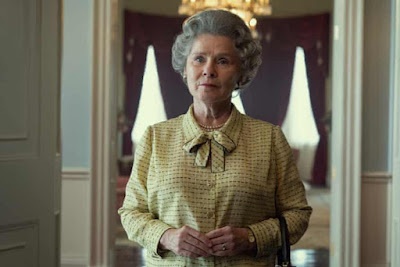 Imelda Staunton as the Queen

Imelda Staunton will play the Queen throughout the 1990s until 2003. Photograph: Alex Bailey/Netflix

The first image of Imelda Staunton in character as the Queen in season five of The Crown has been revealed.

Staunton has taken over from the Golden Globe winner Olivia Colman, as the fresh series ushers in a new era for the royal family. Netflix gave fans a first glimpse of Staunton as the monarch while she was still filming the next instalment of the Netflix show.

Best known for her Oscar-nominated role in 2004’s Vera Drake, and as Dolores Umbridge in Harry Potter, Staunton will portray the Queen throughout the 1990s and to 2003.

Alongside the image, The Crown’s official Twitter account wrote: “An early glimpse of our new Queen Elizabeth II, Imelda Staunton.”

Staunton will be joined by Jonny Lee Miller as John Major, while Lesley Manville will be Princess Margaret. The Game of Thrones star Jonathan Pryce will play Prince Philip, and Elizabeth Debicki of Tenet fame will feature as Diana, Princess of Wales. Dominic West, best known for his roles in The Wire and The Affair, will portray Prince Charles. The shoot began this month at Elstree Studios in Hertfordshire.

The coming season, which is expected to air next year, follows a period of history centring on Charles and Diana’s turbulent marriage, as well as the deaths of Diana and Princess Margaret and the fire at Windsor Castle.

The Crown’s sixth season will reportedly be the last. In an interview with Broadcast earlier this month, Suzanne Mackie, executive producer, said The Crown’s creator, Peter Morgan, “simply cannot” write another season because it would be such recent history that he hasn’t “had time to gain a proper perspective”.

Colman, who took over from Claire Foy as the Queen, was nominated for Emmys in The Crown’s third and fourth seasons and won a Golden Globe for her work in the show’s third season.