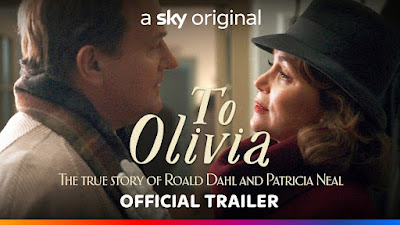 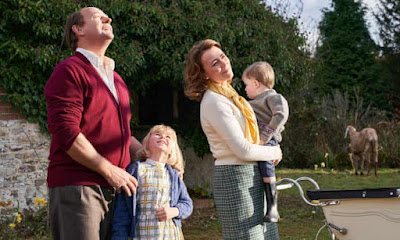 Keeley Hawkes and Hugh Bonneville are decent as the actor and children’s author whose daughter died aged seven, but there is no real howl of pain

The unbearable grief of losing a child is a difficult subject for any movie to encompass – and it defeats this decently acted but syrupy, glib drama about the early married life of movie star Patricia Neal and children’s author Roald Dahl, whose seven-year-old daughter Olivia died in 1962 of encephalitis due to measles. Despite the best intentions, To Olivia winds up creating a carpet of eggshells for its audience to walk across.

The film suggests the family were brought closer together by this catastrophe, resulting in Neal gaining new emotional intelligence for her acting and Dahl being able to accept creative comments on his work from his family, and so getting crucial improvements for his 1964 hit Charlie and the Chocolate Factory. Maybe – or perhaps Olivia’s death was an agony that everyone simply had to live with and live through, and one that may have accelerated Dahl’s existing slide towards cantankerous bigotry.

It did have one actual result: Dahl later became a powerful campaigner for vaccination. In 1962, there was no vaccine for measles, a fact mentioned in the postscript. (Maybe it is not too late to enlist Dahl’s support against the insidious anti-vaxxers: every Dahl book or movie should come displayed with Dahl’s vaccination message.)

Keeley Hawes plays Neal, the glamorous star content to live in a rambling house in the chilly English countryside, cheerfully putting up with her moody and mercurial husband, who indulges the children with flights of fancy when he’s not grumpily putting away the scotch in his writing den. Dahl is affectionately played by Hugh Bonneville, and inevitably makes Dahl more attractive and personable than was the case. Then the unspeakable tragedy happens; Dahl retreats into misery, unable even to say Olivia’s name, and the increasingly lonely and alienated Neal fatefully decides to head out to Hollywood to act in the western drama Hud, opposite Paul Newman.

This film comes to life in the two scenes when its hushed note of kindly reverence is broken. Neal and Dahl go for spiritual succour to his old headteacher, Geoffrey Fisher, the archbishop of Canterbury – fiercely played by Geoffrey Palmer in his final film role. Fisher’s blithering, pompous nonsense about animals not being allowed in the kingdom of heaven enrages them both. Then later, when Neal meets Newman (Sam Heughan), he coolly declines to engage in the ashen-faced condolences.

There is no real howl of pain of the kind that we had in, say in the 1993 movie, Shadowlands about the personal grief of CS Lewis. To Olivia is cushioned by its own carefully managed good taste.

Released on 19 February on Sky Cinema. 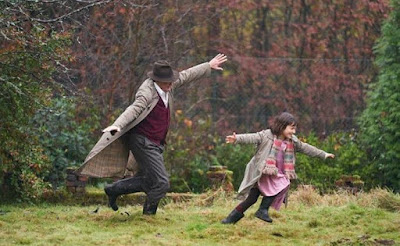 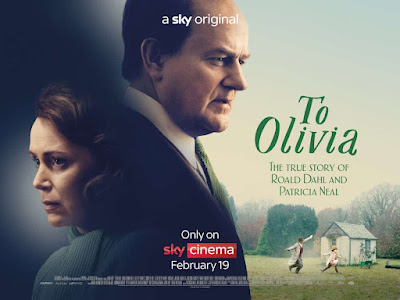 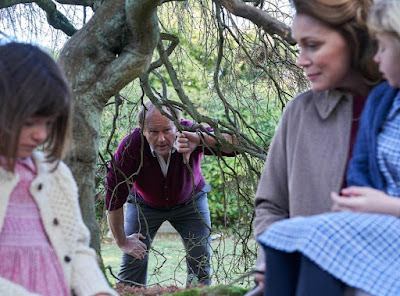 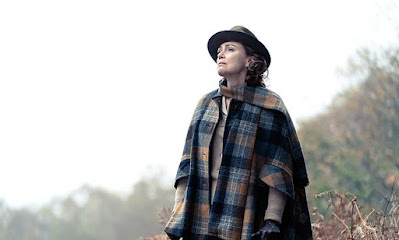 To Olivia review: A portrait of grief that struggles to reconcile the two sides of Roald Dahl

The film charts the years after Dahl and his wife, actor Patricia Neal, lost their eldest daughter Olivia to measles-induced encephalitis

Thirty years have passed since the death of Roald Dahl and we still wrestle with his legacy. As a man, he was cantankerous and deeply antisemitic, known for belittling his loved ones and treating his audience with apathy. On the page, he’d allow worlds of infinite wonder and impish genius to blossom. To Olivia, a film by John Hay, attempts to sidestep the matter entirely and tell a story about grief, in all its universal forms. At times, it feels like a cop-out.

In 1962, Dahl and his wife, actor Patricia Neal, lost their eldest daughter Olivia to measles-induced encephalitis. She was seven years old. Emerging from the throes of grief, the couple would go on to celebrate the respective high points of their careers – Dahl published Charlie and the Chocolate Factory in the US in 1964, to great acclaim, while Neal won the Oscar for Best Actress a year earlier, for the role of Paul Newman’s hard-bitten housekeeper in Hud.

To Olivia charts the space in between these events, with Hugh Bonneville and Keeley Hawes as Dahl and Neal. Grief festers within the walls of their secluded country home – and inside the author’s famous writing shed, where the film shows him in private commune with his boyhood self. Presumably, this narrative trick is meant to explain the source of Dahl’s vast imagination, though it’s never made clear. All the boy seems to do is stare. It’s a great, wide-eyed look that seems to be the only thing capable of guilt-tripping the man into writing.

Hay, alongside cinematographer Graham Frake, beautifully captures how fleeting the small, magical words shared between parents and children can be. The house exists in Buckinghamshire and also, seemingly, in Arthurian legend. Mist clings to the tops of forest trees, and birds – sometimes depicted as a blur of CGI – roost inside a large, intricate menagerie in the garden. But the fairies and tea parties start to dissipate as soon as the thick smog of death starts to roll in.

To Olivia wants us to see our own experiences reflected in the agonies of the Dahl family. They cycle through their grief, on both a public and private stage – there are egg cress sandwiches passed out at the wake, followed by silent tears among the wreckage of the dead girl’s possessions. But Hay and David Logan’s script is attempting to wrench its story out of the hands of those it depicts. It struggles to reconcile the palpable image of a sensitive family man laid low by depression with the more complicated reality that ran alongside it – that of a sometimes-tyrant with a great capacity for manipulation. Bonneville does his best to find some form of communion between the two. There’s a wildness in his eyes that expresses far more than what’s on the page.

Hawes, meanwhile, is heartwrenching as someone who’s always expected to be a wife and mother first, a grieving woman second. But she never fully leans into Neal’s husky, lived-in drawl, especially when replicating her performance in Hud. The same could be said for the film’s treatment of Paul Newman, here played by Outlander’s Sam Heughan. The piercing blue eyes and sharp jawline are all present and correct, but the film presents him more as a generic Hollywood blowhard than the genteel, thoughtful man he’s commonly described as. True, grief is universal – but To Olivia never embraces the fact that stories draw their power from specificity. It’s what makes them feel real.