"You cannot mass produce fashion or consume 'sustainably' as the world is shaped today. That is one of the many reasons why we will need a system change," Thunberg tweeted. 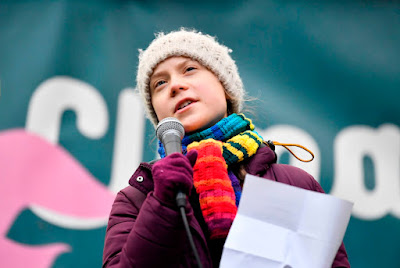 Fast fashion’s waste model is going out of style

Waste is an undeniable part of the fast-fashion business model: The industry fills clothing racks with new items at lightning speed, creating and capitalizing on new trends to be worn and discarded on a massive scale.

But as Vogue readers will know, heavy carbon footprints are out.

A backlash against the industry's environmental impact — as recently highlighted by Swedish climate activist Greta Thunberg on the cover of Vogue Scandinavia — has upped the pressure on companies to cut back on waste and rethink how and what they produce.

“The carbon footprint [of the fashion industry] is extortionate, especially because it’s global,” said Chetna Prajapati, a researcher in textiles at England's Loughborough University.

Clothing and footwear production is responsible for 10 percent of global greenhouse gas emissions — more than “all international flights and maritime shipping combined,” according to a European Parliament report published last year.

The industry also creates huge amounts of waste: In the EU, the average consumer throws away some 11 kilograms of textiles every year, according to the European Environment Agency.

Very little of that ends up being recycled. Globally, less than 1 percent of clothing material is recycled into new clothes, and only 13 percent is recycled into other products, the Ellen McArthur Foundation found. In the EU, the bulk of collected textiles is exported to countries without proper collection infrastructure, meaning much of it ends up being landfilled or incinerated.

The EU is expected to launch new targets for recycling and textile reuse this fall and will require countries to set up separate collection mechanisms for textiles by 2025 as part of its Waste Framework Directive. Meanwhile, growing consumer appetite for more sustainable solutions is pushing big brands to set ambitious new recycling targets, according to Mauro Scalia, director of sustainable businesses at the European Apparel and Textile Industry Confederation (EURATEX), which last year launched an initiative to establish European textile recycling hubs.

But researchers, activists and policymakers warn that the industry can't count on recycling alone to mitigate its environmental impact.

"You cannot mass produce fashion or consume 'sustainably' as the world is shaped today. That is one of the many reasons why we will need a system change," Thunberg tweeted.

In response to growing pressure to cut their carbon footprint, a number of big brands have come out with new pledges to green their business and increase their share of recycled content.

Inditex, the world's largest fast-fashion company, has committed to using only sustainable, organic or recycled cotton by 2023 and only recycled polyester by 2025.

Fashion retailer Primark last year pledged to more than double the number of products made from recycled materials to 40 million. It has also launched an in-store recycling scheme, where all donated clothes "are reused, recycled or repurposed, with nothing going to landfill," a Primark spokesperson said.

But these commitments risk falling flat if advances in recycling technology can't be scaled up quickly.

Most textiles are recycled using a process known as mechanical recycling that tears apart the fabric and creates “an amalgamation of all different yarns and properties that are unknown," said Prajapati. These can't be used for new clothes as the resulting fibers are shorter and produce fabrics of lower quality that can only be used for items like emergency blankets or insulation — a process known as downcycling.

To be turned into clothes of the same quality, old textiles need to be recycled chemically in a process that restores fiber strength. The technology is already being used on a small scale with fabrics made of a single fiber but "will take at least five years to go industrial" and becomes more complex with blends of natural and synthetic fibers, according to Prajapati.

Chemical recycling has also come under fire from green groups for being energy-intensive, as it requires large amounts of heat or pressure. But alternative approaches being developed — including biological recycling, which uses enzymes to break apart certain materials — are not yet ready to be used at scale, she said.

That's why recycling is "part of the solution" but not "the only solution" when it comes to reducing fashion's environmental impact, according to Prajapati.

The H&M Group said it has established several partnerships to drive innovation in textile recycling technologies, but stressed it only considers recycling one of "many ways" to become more sustainable and is conducting "several pilots of new business models involving print-on-demand, customisation, repair, rental and re-commerce."

Some NGOs warn that too much emphasis on recycling could undermine long-term efforts to green the sector. Instead, policies should push companies to invest in durable design.

“We don't want to create the kind of industry which will require new products to be placed on the market regularly enough to fit in the recycling industry,” said Mathieu Rama, senior policy officer at the NGO RREUSE, which represents organizations active in reuse, repair and recycling efforts.

The EU's upcoming textile strategy risks prioritizing recycling over reuse, which has a lesser environmental and social impact, he warned.

Policies should incentivize brands to focus on designing for longevity, he said. Clothes using only natural blends and a single fabric are easier to recycle but are also easier to resell second-hand as consumers tend to consider them as being of higher quality.

The European Environmental Bureau, an NGO, has called on Brussels to include textiles in its Ecodesign Directive, which sets requirements on products' environmental performance, in order to block "unsustainably produced, inefficient, toxic, wasteful, and polluting textile products" from gaining access to the EU market in the first place.

The scope of what the EU can "control and enforce" when it comes to sustainable product design is limited, according to Scalia, given that 80 percent of garments circulating in the EU are imported.

Ultimately, for recycling to be useful in curbing fashion's pollution, there needs to be a greater shift toward sustainability at all levels, including the initial design and a company's supply chains, said Syrett, of Global Fashion Agenda.

The industry has to ditch its "take, make, dispose" approach and embrace a new mentality, she said.