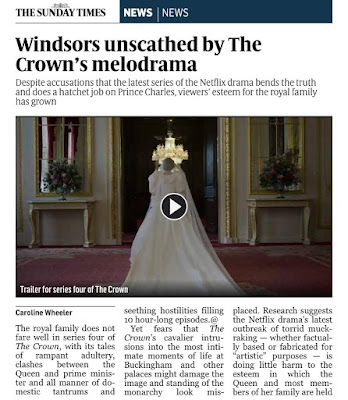 What crisis? Popularity of Royals INCREASES despite controversial The Crown 'hatchet job'

THE ROYAL Family's popularity has increased despite the Crown's "hatchet job" on the royals, new data has revealed.

Controversy was sparked in the last few weeks following the release of the TV series which depicted a dire relationship between Prince Charles and Diana. Due to this, there had been concern the depiction of the relationship, and alleged treatment from some royals toward Diana, would damage the popularity of the Royal Family. Former Buckingham Palace press secretary, Dickie Arbiter, criticised the depiction of Diana and Charles in the show.

“You have to ask, is it necessary?"

Despite the uproar, research from Focaldata shows the royals’ popularity has improved by 35 percent.

In the data, a further 42 percent claimed their impression of the pair had remained the same following the series.

In the series, Charles was shown to have a cold and distant relationship with his then-wife.

Despite that, the data reported by The Sunday Times showed 34 percent of the 1,023 asked revealed their opinion had improved of Charles.

A further 39 percent said their opinion had remained the same of the royal.

Just a quarter of those surveyed claimed their opinion of Charles had become more negative following the series.

Charles and Camilla's Clarence House Twitter account has been forced to filter responses due to the abuse it has received.

Clarence House has not officially commented on the matter but when looking at their Twitter account, only those which the profile follows or mentions may comment on posts.

There have also been calls for a disclaimer message to be added to the series stating that some events had been dramatised.

Helena Bonham Carter, who depicts Princess Margaret, also claimed the series has a responsibility to state it is a drama and not a historical documentary.

She told the official podcast of the series: “It is dramatised.

“I do feel very strongly because I think we have a moral responsibility to say hang on guys, it's not a drama doc, we're making a drama.

Emma Corrin, who played Diana in the series, also admitted the cast attempts to show how fictionalised the series is in.

Culture Secretary Oliver Dowden also spoke of the need to state the fiction of certain parts of the series.

He told the Mail on Sunday: “'It's a beautifully produced work of fiction, so as with other TV productions, Netflix should be very clear at the beginning it is just that.

“Without this, I fear a generation of viewers who did not live through these events may mistake fiction for fact.” 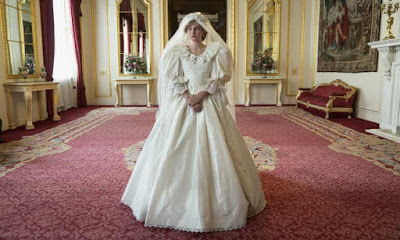 Netflix has said it has no plans to add a disclaimer to The Crown stating that the hit series is a work of fiction, after the UK culture secretary said he was going to write to request such a caveat.

In a statement on Saturday, Netflix said: “We have always presented The Crown as a drama and we have every confidence our members understand it’s a work of fiction that’s broadly based on historical events.

“As a result we have no plans, and see no need, to add a disclaimer.”

Oliver Dowden urged the company last week to add a note stressing that The Crown was a drama, following complaints about the historical accuracy of the fourth and latest season, which is set in 1980s.

Dowden told the Mail on Sunday that the series was “a beautifully produced work of fiction” but he was concerned that a generation of viewers who did not live through the events depicted may mistake it for fact.

Some Conservatives have criticised the programme’s depiction of Margaret Thatcher, played by Gillian Anderson. They say it exaggerates the extent to which she clashed with the Queen, played by Olivia Colman.

Accusations of inaccuracies in Peter Morgan’s production span from repeatedly showing the Queen “wrongly dressed for trooping the colour” to disputes over Charles’s fishing technique.

The biggest bones of contention, however, have been over the depiction of Prince Charles’ marriage to Diana. He is portrayed phoning Camilla Parker Bowles every day in the early years of the marriage, and Diana is depicted as forcing plans for the couple’s trip to Australia to be changed after throwing a tantrum.

Writing in the Guardian, Simon Jenkins accused the fourth season of having “upped the fabrication and the offence”. Arguing that modern history was “too close to what should be sacred ground, bearing witness to passing events”, he wrote that artistic licence could not justify fabrications that showed living or recently dead people in the worst possible light.

Charles Spencer, Diana’s brother, was among those calling on Netflix to add a disclaimer. He told ITV: “I think it would help The Crown an enormous amount if, at the beginning of each episode, it stated that, ‘This isn’t true but it is based around some real events,’. I worry people do think that this is gospel and that’s unfair.”

Helena Bonham Carter, who plays Princess Margaret in the series, has said The Crown has “a moral responsibility” to say it is a drama and not a drama-documentary.

The Crown has also been praised for presenting the royal family as “real people”. Others have pointed out that Charles’ and Diana’s infidelity and marital problems are well recorded, including in interviews they both gave.

Morgan has defended his work, saying it is thoroughly researched and true in spirit.