The Enigma cipher machine was discovered on the seabed in Gelting Bay near Flensburg, Germany.

German divers who fished an Enigma encryption machine out of the Baltic Sea have handed their rare find over to a museum for restoration.

The code machine – which was used by the Nazis to send coded messages during the second world war – was discovered last month by divers on assignment for the environmental group WWF. The group was searching for abandoned fishing nets in the Bay of Gelting off the north-east coast of Germany.

“A colleague swam up and said: there’s a net there with an old typewriter in it,” Florian Huber, the lead diver, told the DPA news agency.

The team quickly realised they had stumbled across an historic artefact and alerted the authorities.

Dr Ulf Ickerodt, the head of the state archaeological office in Schleswig-Holstein, said the machine would be restored by experts at the state’s archaeology museum.

The delicate process, including a thorough desalination process after seven decades in the Baltic seabed, “will take about a year”, he said.

After that, the machine will go on display at the museum.

Dr Jann Witt, a historian from the German Naval Association, told DPA he believed the machine, which has three rotors, was thrown overboard from a German warship in the final days of the war.

It is less likely to have come from a scuttled submarine, he said, because Adolf Hitler’s U-boats used the more complex four-rotor Enigma machines.

The allied forces worked tirelessly to decrypt the codes produced by the Enigma machine, which were changed every 24 hours.

The British mathematician Alan Turing, who is seen as the father of modern computing, spearheaded a team at Britain’s Bletchley Park that cracked the code in 1941.

The breakthrough helped the allies decipher crucial radio messages about German military movements. Historians believe it shortened the war by about two years. 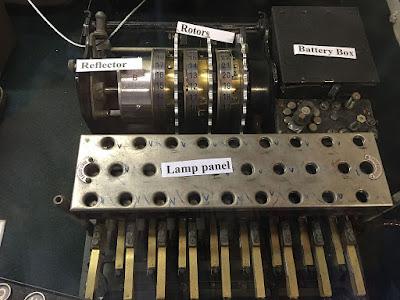 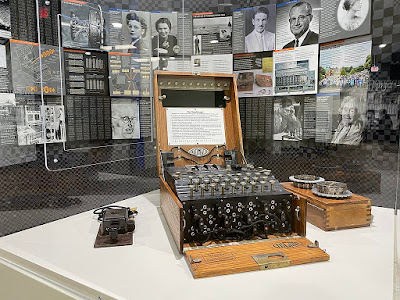 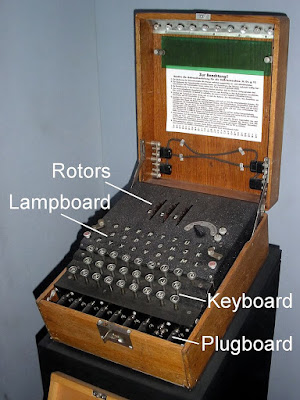 The Enigma machine is an encryption device developed and used in the early- to mid-20th century to protect commercial, diplomatic and military communication. It was employed extensively by Nazi Germany during World War II, in all branches of the German military.

Enigma has an electromechanical rotor mechanism that scrambles the 26 letters of the alphabet. In typical use, one person enters text on the Enigma's keyboard and another person writes down which of 26 lights above the keyboard lights up at each key press. If plain text is entered, the lit-up letters are the encoded ciphertext. Entering ciphertext transforms it back into readable plaintext. The rotor mechanism changes the electrical connections between the keys and the lights with each keypress. The security of the system depends on a set of machine settings that were generally changed daily during the war, based on secret key lists distributed in advance, and on other settings that were changed for each message. The receiving station has to know and use the exact settings employed by the transmitting station to successfully decrypt a message.

While Germany introduced a series of improvements to Enigma over the years, and these hampered decryption efforts to varying degrees, they did not ultimately prevent Britain and its allies from exploiting Enigma-encoded messages as a major source of intelligence during the war. Many commentators say the flow of Ultra communications intelligence from the decryption of Enigma, Lorenz and other ciphers, shortened the war significantly, and may even have altered its outcome.

The Enigma machine was invented by the German engineer Arthur Scherbius at the end of World War I. The German firm Scherbius & Ritter, co-founded by Arthur Scherbius, patented ideas for a cipher machine in 1918 and began marketing the finished product under the brand name Enigma in 1923, initially targeted at commercial markets. Early models were used commercially from the early 1920s, and adopted by military and government services of several countries, most notably Nazi Germany before and during World War II.

Several different Enigma models were produced, but the German military models, having a plugboard, were the most complex. Japanese and Italian models were also in use. With its adoption (in slightly modified form) by the German Navy in 1926 and the German Army and Air Force soon after, the name Enigma became widely known in military circles. Pre-war German military planning emphasized fast, mobile forces and tactics, later known as blitzkrieg, which depend on radio communication for command and coordination. Since adversaries would likely intercept radio signals, messages would have to be protected with secure encoding. Compact and easily portable, the Enigma machine filled that need.

Around December 1932, Marian Rejewski, a Polish mathematician and cryptanalyst, while working at the Polish Cipher Bureau, used the theory of permutations and flaws in the German military message encipherment procedures to break the message keys of the plugboard Enigma machine. Rejewski achieved this result without knowledge of the wiring of the machine, so the result did not allow the Poles to decrypt actual messages. The French spy Hans-Thilo Schmidt obtained access to German cipher materials that included the daily keys used in September and October 1932. Those keys included the plugboard settings. The French passed the material to the Poles, and Rejewski used some of that material and the message traffic in September and October to solve for the unknown rotor wiring. Consequently, the Polish mathematicians were able to build their own Enigma machines, which were called Enigma doubles. Rejewski was aided by cryptanalysts Jerzy Różycki and Henryk Zygalski, both of whom had been recruited with Rejewski from Poznań University. The Polish Cipher Bureau developed techniques to defeat the plugboard and find all components of the daily key, which enabled the Cipher Bureau to read German Enigma messages starting from January 1933. Over time, the German cryptographic procedures improved, and the Cipher Bureau developed techniques and designed mechanical devices to continue reading Enigma traffic. As part of that effort, the Poles exploited quirks of the rotors, compiled catalogues, built a cyclometer to help make a catalogue with 100,000 entries, invented and produced Zygalski sheets and built the electro-mechanical cryptologic bomba to search for rotor settings. In 1938, the Germans added complexity to the Enigma machines, leading to a situation that became too expensive for the Poles to counter. The Poles had six such bomby (plural of bomba), but when the Germans added two more rotors, ten times as many bomby were then needed, and the Poles did not have the resources.

On 26 and 27 July 1939, in Pyry near Warsaw, the Poles initiated French and British military intelligence representatives into their Enigma-decryption techniques and equipment, including Zygalski sheets and the cryptologic bomb, and promised each delegation a Polish-reconstructed Enigma. The demonstration represented a vital basis for the later British continuation and effort.

In September 1939, British Military Mission 4, which included Colin Gubbins and Vera Atkins, went to Poland to evacuate code-breakers Gwido Langer, Marian Rejewski, Jerzy Różycki and Henryk Zygalski from the country with their replica Enigma machines. The Poles were taken across the border into Atkins' native Romania, at the time a neutral country where some of them were interned. Atkins arranged for their release and onward travel to Western Europe to advise the French and British, who at the time were still unable to decrypt German messages.

Gordon Welchman, who became head of Hut 6 at Bletchley Park, has written: "Hut 6 Ultra would never have gotten off the ground if we had not learned from the Poles, in the nick of time, the details both of the German military version of the commercial Enigma machine, and of the operating procedures that were in use."

During the war, British cryptologists decrypted a vast number of messages enciphered on Enigma. The intelligence gleaned from this source, codenamed "Ultra" by the British, was a substantial aid to the Allied war effort.

Though Enigma had some cryptographic weaknesses, in practice it was German procedural flaws, operator mistakes, failure to systematically introduce changes in encipherment procedures, and Allied capture of key tables and hardware that, during the war, enabled Allied cryptologists to succeed and "turned the tide" in the Allies' favour. 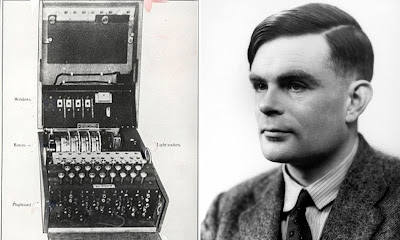 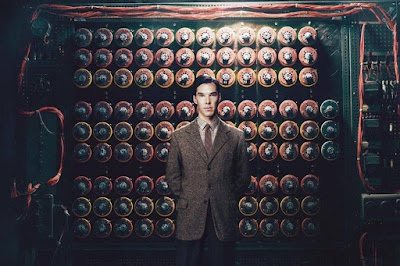 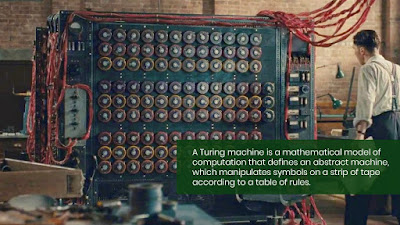 Turing machine is a mathematical model of computation that defines an abstract machine, which manipulates symbols on a strip of tape according to a table of rules. Despite the model's simplicity, given any computer algorithm, a Turing machine capable of simulating that algorithm's logic can be constructed.

The machine operates on an infinite memory tape divided into discrete "cells".The machine positions its "head" over a cell and "reads" or "scans" the symbol there. Then, as per the symbol and the machine's own present state in a "finite table" of user-specified instructions, the machine (i) writes a symbol (e.g., a digit or a letter from a finite alphabet) in the cell (some models allow symbol erasure or no writing), then (ii) either moves the tape one cell left or right (some models allow no motion, some models move the head), then (iii) (as determined by the observed symbol and the machine's own state in the table) either proceeds to a subsequent instruction or halts the computation.

Turing machines proved the existence of fundamental limitations on the power of mechanical computation. While they can express arbitrary computations, their minimalist design makes them unsuitable for computation in practice: real-world computers are based on different designs that, unlike Turing machines, use random-access memory.