As Princess Anne and Mark Phillips were returning to Buckingham Palace on 20 March 1974, from a charity event on Pall Mall, their Princess IV car was forced to stop on the Mall by a Ford Escort. The driver of the Escort, Ian Ball, jumped out and began firing a pistol. Inspector James Beaton, Anne's personal police officer, responded by exiting the car in order to shield her and to attempt to disarm Ball. However, Beaton's firearm, a Walther PPK, jammed, and he was shot by the assailant, as was Anne's chauffeur, Alex Callender, when he tried to disarm Ball. Brian McConnell, a nearby tabloid journalist, also intervened, and was shot in the chest. Ball approached Anne's car and told her that he intended to kidnap her and hold her for ransom, the sum given by varying sources as £2 million or £3 million, which he claimed he intended to give to the National Health Service. Ball told Anne to get out of the car, to which she replied: "Not bloody likely!", and reportedly briefly considered hitting Ball.

Eventually, she exited the other side of the limousine as had her lady-in-waiting, Rowena Brassey. A passing pedestrian, a former boxer named Ron Russell, punched Ball in the back of the head and led Anne away from the scene. At that point, Police Constable Michael Hills happened upon the situation; he too was shot by Ball, but he had already called for police backup. Detective Constable Peter Edmonds, who had been nearby, answered, gave chase, and finally arrested Ball.

Anne visited Beaton in hospital and thanked him for his assistance. In 1984, the princess spoke about the event on Parkinson saying she was 'scrupulously polite' to her would-be kidnapper as she thought it would be 'silly to be too rude at that stage'.

Ball pleaded guilty to attempted murder and kidnapping. As of 2019, he was still detained under the Mental Health Act, at Broadmoor Hospital. 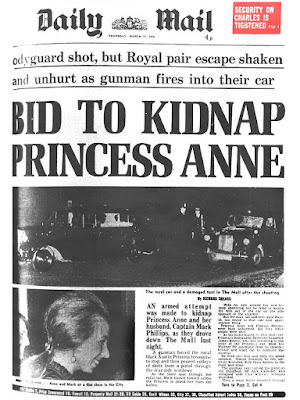 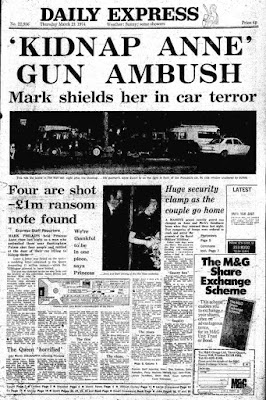 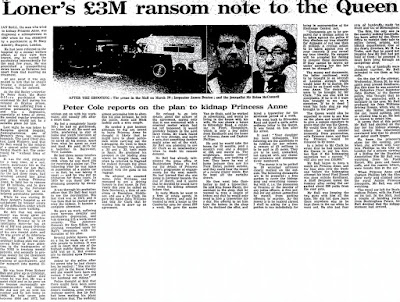 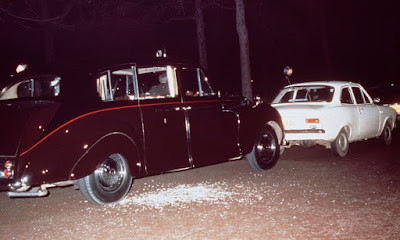 23 May 1974: Peter Cole on the trial of the first person to attempt to kidnap a member of the royal family

The first man ever to attempt to kidnap a member of the Royal Family, Ian Ball, was yesterday in the Hampton special hospital after the Lord Chief Justice, Lord Widgery, had made an order under the Mental Health Act. He was sent to the hospital for an unlimited length of time.

Mr Ball forced a car carrying Princess Anne and Captain Mark Phillips to stop in the Mall, London, on March 20 by driving his own car in front of it. He was carrying two guns, and in the skirmish which followed he shot and wounded two policemen and two civilians.

Yesterday at the Old Bailey he faced charges of attempted murder, wounding with intent to cause grievous bodily harm, and attempting to kidnap Princess Anne. He pleaded guilty to two of the attempted murder charges and to the kidnapping charge. The other charges were set aside.

Mr Samuel Silkin, QC, the Attorney-General, told an extraordinary story of how, over two years, Mr Ball planned in minute detail the kidnapping of the princess. He intended to hold her to ransom for £3 millions and to give the money to the National Health Service, to be used to improve the care and treatment of psychiatric patients.

Using the name John Williams, he attempted to destroy his Ian Ball identity, burning his passport and other personal papers shortly before he carried out his kidnap plan. He had been to Spain to buy two pistols, he had rented a house in Fleet, Hampshire, not far from Sandhurst, where Princess Anne was living with her husband, and had written a long ransom note to the Queen.

The letter was on him when he was captured in the Mall.

Careful checks were carried out yesterday on everyone who entered the court. Mr Ball, tall and smartly dressed, sat in the dock with his head bowed. Only in registering his pleas did he speak and then it was in a clear, strong voice. He showed no emotion when he was told that he would be going to a special hospital.

Lord Widgery discussed with both the Home Office psychiatrist, Dr Peter Scott, and with defence counsel, Mr John Hazan, QC, whether a life prison sentence should accompany the hospital order.

He said: “I have been concerned in this case as to whether the proper sentences should be one of life imprisonment or sentence for a hospital order, which isn’t a prison but a special hospital. I accept the evidence of the doctors that he requires treatment in a special hospital and I should not be minded to make any order which would in any way hamper his being so treated.

My concern, which may perhaps be exercised in the future rather than today, is that when this kind of offence is becoming more serious and more common in the world the time may come when we have to recognise that for offences such as this the background of a prison sentence is necessary in order to secure maximum protection for the public. I say that in order that other judges may ponder the problem if and when they get it hereafter.”

Earlier Dr Scott said that he did not think prison would be appropriate medically in Mr Ball’s case. He needed treatment which would be difficult to provide in prison. There were four reasons why he thought a hospital order was desirable.

Mr Ball was by any standards mad at the time of the attempted kidnap; he was still potentially suicidal and homicidal; he needed treatment; and there was a secure hospital available where he could receive suitable treatment.

Dr Scott said that there was no room at Broadmoor hospital. But other reports suggested that Broadmoor was not chosen because it was so near a royal home.

Mr Ball had a history of psychiatric disturbance, and had been seen many times at the St Mary Abbott hospital, London between 1967 and 1972. He was diagnosed a schizophrenic and given tranquillising drugs. It was suggested he become an in-patient, but he rejected this suggestion.

Mr Silkin described the story of the planning of the kidnap as unbelievable, one of the rare cases where fact was stranger than fiction.

I remembered the event very well. But I didn't remember that Ball had a history of psychiatric disturbance, hospitalisation and psychiatric drug treatment London in the years before the kidnapping attempt. Nor did we know that Ball is still detained under the Mental Health Act.

That reminds me of Martin Bryant's massacre in Tasmania. Bryant is still in maximum-security prison, but surely he should also be detained under the Mental Health Act instead.