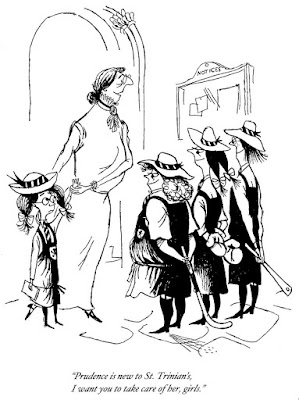 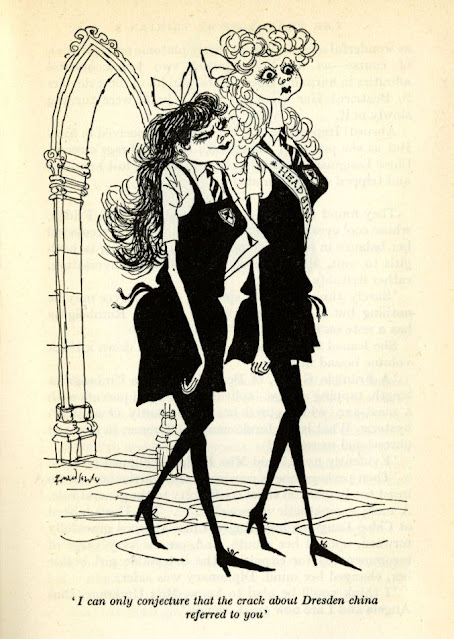 St Trinian's is a British gag cartoon comic strip series, created and drawn by Ronald Searle from 1946 until 1952. The cartoons all centre on a boarding school for girls, where the teachers are sadists and the girls are juvenile delinquents. The series was Searle's most famous work and inspired a popular series of comedy films.

Searle published his first St Trinian's School cartoon in 1941 in the magazine Lilliput. Shortly afterward he entered the military as World War II raged on. He was captured at Singapore and spent the rest of the war as a prisoner of the Japanese. After the war, in 1946 Searle started making new cartoons about the girls, but the content was much darker compared to the earlier years.[2]

The school is the antithesis of the type of posh girls' boarding school depicted by Enid Blyton or Angela Brazil; its female pupils are bad and often well armed, and mayhem is rife. The schoolmistresses are also disreputable. Cartoons often showed dead bodies of girls who had been murdered with pitchforks or succumbed to violent team sports, sometimes with vultures circling; girls drank, gambled and smoked. It is reputed that the gymslip style of dress worn by the girls was closely modelled on the school uniform of James Allen's Girls' School (JAGS) in Dulwich, which Searle's daughter Kate attended.

In the 1950s, films were developed that were based on the cartoon series. These comedies implied that the girls at the school were the daughters of dubious characters, such as gangsters, crooks, and shady bookmakers. The institution is often referred to as a "female borstal", as if it were a reform school.

During 1941 Searle had gone to the artists' community in the village of Kirkcudbright. Whilst visiting the family Johnston, he made a drawing to please their two schoolgirl daughters, Cécilé and Pat, (their school had been evacuated to New Gala House in Galashiels in the Scottish Borders owing to the war). Searle was puzzled as to why two schoolgirls should seem so keen to return to their school, an Academy for Young Ladies in Dalkeith Road known as St Trinnean's. The school was of the experimental sort, and allowed its pupils a certain degree of freedom and autonomy in their own educational choices. The school's original building is now part of the University of Edinburgh.

Searle's St Trinian's was based on two independent girls' schools in Cambridge – Perse School for Girls, now known as the co-educational Stephen Perse Foundation, and St Mary's School for girls, formerly a convent. Growing up in Cambridge, Searle regularly saw the girls on their way to and from school; they originally inspired his cartoons and characters. The Perse School for Girls' Archive area holds several original St Trinian's books, given to the school by Ronald Searle. He also based the school partly on the former Cambridgeshire High School for Girls (now Long Road Sixth Form College).

During his BBC interview Searle agreed that the cruelty depicted at St Trinian's derived partly from his captivity during World War II but stressed that he included it only because the ignoble aspect to warfare in general had become more widely known.

The Terror of St Trinians or Angela's Prince Charming (1952; text by Timothy Shy, pen-name for D. B. Wyndham-Lewis)

In the 1950s, a series of St Trinian's comedy films was made, featuring well-known British actors, including Alastair Sim (in drag as the headmistress, and also playing her brother); George Cole as spiv "Flash Harry", Joyce Grenfell as Sgt Ruby Gates, a beleaguered policewoman; and Richard Wattis and Eric Barker as the civil servants at the Ministry of Education for whom the school is a source of constant frustration and nervous breakdowns. Searle's cartoons appeared in the films' main title design.

In the films the school became embroiled in various shady enterprises, thanks mainly to Flash, and, as a result, was always threatened with closure by the Ministry. (In the last of the original four, this became the "Ministry of Schools", possibly because of fears of a libel action from a real Minister of Education.) The first four films form a chronological quartet, and were produced by Frank Launder and Sidney Gilliat. They had earlier produced The Happiest Days of Your Life (1950), a stylistically similar school comedy, starring Alastair Sim, Joyce Grenfell, George Cole, Richard Wattis, Guy Middleton, and Bernadette O'Farrell, all of whom later appeared in the St Trinian's series, often playing similar characters.

Barchester and Barset were used as names for the fictional towns near which St Trinian's School was supposedly located in the original films. In Blue Murder at St Trinian's, a signpost was marked as 2 miles to Barset, 8 miles to Wantage, indicating a location in what was then Berkshire, now Oxfordshire.

St Trinian's is depicted as an unorthodox girls' school where the younger girls wreak havoc and the older girls express their femininity overtly, turning their shapeless schoolgirl dress into something sexy and risqué by the standards of the times. St Trinian's is often invoked in discussions about groups of schoolgirls running amok.

The St Trinian's girls themselves come in two categories: the Fourth Form, most closely resembling Searle's original drawings of ink-stained, ungovernable pranksters, and the much older Sixth Form, sexually precocious to a degree that may have seemed alarming to some in 1954.

In the films, the Fourth Form includes a number of much younger girls who are the most ferocious of them all. It is something of a rule of thumb that the smaller a St Trinian's is, the more dangerous she is—especially when armed, most commonly with a lacrosse or hockey stick—though none of them can ever be considered harmless.

In the first two films, St Trinian's is presided over by the genial Miss Millicent Fritton (Sim in drag), whose philosophy is summed up as: "In other schools girls are sent out quite unprepared into a merciless world, but when our girls leave here, it is the merciless world which has to be prepared." Later other headmistresses included Dora Bryan in The Great St Trinian's Train Robbery. 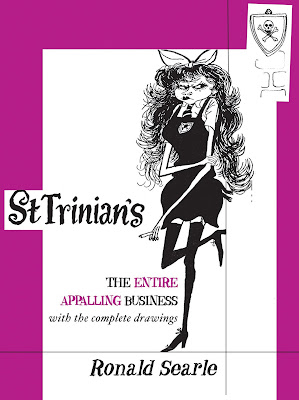 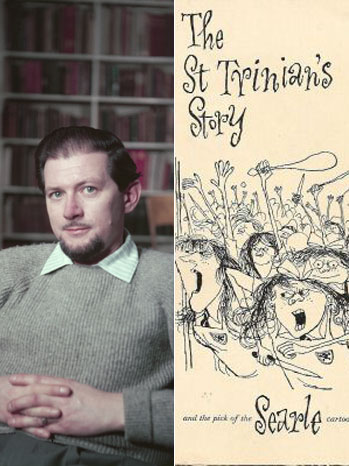 His daughter Kate Searle said in a statement that he "passed away peacefully in his sleep" in a hospital in France.

Searle's spindly cartoons of the naughty schoolgirls first appeared in 1941, before the idea was adapted for film.

The first movie version, The Belles of St Trinian's, was released in 1954.

Joyce Grenfell and George Cole starred in the film, along with Alastair Sim, who appeared in drag as headmistress Millicent Fritton.

The gothic, line-drawn cartoons breathed life into the gruesome pupils of St Custard's school, in particular the outspoken, but functionally-illiterate Nigel Molesworth "the goriller of 3B".

Searle's work regularly appeared in magazines and newspapers, including Punch and The New Yorker.

Aside from his schoolday stories, he was a savage satirist, and some of his darker material was informed by his time as a prisoner of war during World War II.

There, he worked on the infamous "Railway of Death" - a Japanese project to create a rail link between Thailand and Burma, the construction of which led to the death of more than 100,000 labourers, including 16,000 Allied prisoners.

Some of the work he created whilst being held captive is displayed at the Imperial War Museum in London.

Cartoonist Gerald Scarfe paid tribute to Searle, whom he described as his "hero".

He said: "He was clever and he was funny and he could draw. A lot of cartoonists come up with an idea first but Ronald could really draw."

However, he added that Searle's most famous creations were a "millstone around his neck".

He told the BBC: "He created St Trinian's, which we all loved, and he despised it because he couldn't get away from it and of course he did many, many other things."

She added: "He really was one of the most important cartoonists, not just in Britain, but in the rest of the world.

"Many people were influenced by his work. He did so many things, he was so versatile, so talented, so prolific. He will be incredibly missed and there was no one else like him."

Chris Beetles, who held several exhibitions of Searle's work at his gallery, said: "He had become the yardstick by which all those professionals in his trade judged themselves, and his witty draughtsmanship was the standard to which they aspired.

"Over my 40-year collecting and art dealing lifetime, I have never encountered a cartoonist with his consistency of drawing ability, and such an inventive range of humour from burlesque to surrealism."

Across his career, Searle won a number of awards, including prizes from America's National Cartoonists' Society and France's prestigious Legion d'Honneur in 2007.

But St Trinian's was his most enduring work - spawning five films between 1954 and 1980.

After a 27-year hiatus, the series was revived in 2007, with Rupert Everett in the headmistress role.

Simon Winder, from Penguin the company that published St Trinian's said: "We are all extremely sad to hear of Ronald's death. He was a marvellous, remarkable man and a great artist.

"I can think of nobody who did more to ridicule and undermine 1950s Britain and St Trinian's and Molesworth will endure forever as masterpieces of comic anarchism."

A full statement from Searle's family read as follows: "Ronald William Fordham Searle, born 3 March 1920, passed away peacefully in his sleep, after a short illness, with his children, Kate and John, and his grandson, Daniel, beside him, on 30 December 2011 in Draguignan, France.

"He requested a private cremation with no fuss and no flowers."