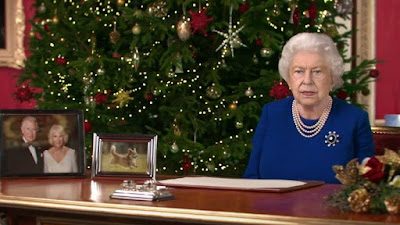 This year's Channel 4 alternative Christmas message will be delivered by a deepfake of the Queen.

While the Queen is delivering her traditional message on the BBC and ITV, her digitally created doppelgänger will be sharing its "thoughts" on Channel 4.

Buckingham Palace told the BBC it had no comment on the broadcast.

Channel 4 said the intention was to give a "stark warning" about fake news in the digital age.

Deepfake technology can be used to create convincing yet entirely fictional video content, and is often used to spread misinformation.

In the message, the deepfake will try its hand at a TikTok viral dance challenge.

The five-minute message will refer to a number of controversial topics, including the decision by the Duke and Duchess of Sussex to leave the UK. It will also allude to the Duke of York's decision to step down from royal duties earlier this year after an interview he gave to the BBC about his relationship with sex offender Jeffrey Epstein.

The BBC's royal correspondent Nicholas Witchell was not impressed: "There have been countless imitations of the Queen. This isn't a particularly good one.

"The voice sounds what it is - a rather poor attempt to impersonate her. What makes it troubling is the use of video technology to attempt to sync her lips to the words being spoken."

Some members of the public have also suggested the video is "disrespectful" via posts on social media.

The media watchdog Ofcom said it had received "a small number of complaints", but because it is a post-transmission regulator could not consider them at this time.

While current technology does allow for voice deepfakes, the voice of this deepfake will be dubbed by British actress Debra Stephenson.

The TV star was previously the voice of a puppet of the monarch in the 2020 revival of satirical sketch show Spitting Image.

Stephenson said: "As an actress it is thrilling but it is also terrifying if you consider how this could be used in other contexts."

The deepfake has been created by Oscar-winning VFX studio Framestore.

At the time, a developer adapted cutting-edge artificial intelligence techniques to create software that swapped one person's face for another.

However, the process has since become much more accessible.

There are now numerous apps that require just a single photo in order to substitute a Hollywood actor for that of the user.

Earlier this year, Microsoft unveiled a tool that can spot deepfakes.

The firm said it hoped to help combat disinformation, but experts warned it was at risk of becoming outdated due to advances in technology.

Nina Schick, author of Deep Fakes and the Infocalypse, told the BBC there was growing concern about the other malicious ways deepfake technology could be used.

"While it offers tremendous commercial and creative opportunities, transforming entire industries from entertainment to communication, it is also a technology that will be weaponised.

The Alternative Christmas Message will be shown on Channel 4 at 15:25 GMT on 25 December. 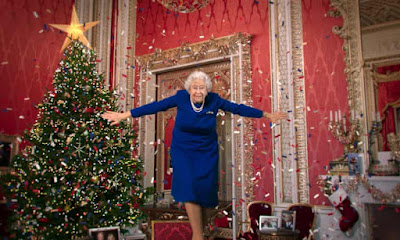 Channel 4 has sparked controversy and debate with a deepfake video of the Queen as an alternative to her traditional festive broadcast, to be aired on Christmas Day.

The broadcaster will show a five-minute video in which a digitally altered version of the Queen shares her reflections on the year, including the departure of Prince Harry and Meghan Markle as senior royals and the Duke of York’s involvement with the disgraced financier Jeffrey Epstein.

The deepfake Queen, voiced by the actor Debra Stephenson, can also be seen performing a dance routine from social media platform TikTok.

Channel 4 said the broadcast was intended to give a “stark warning” about the threat of fake news in the digital era, with its director of programmes, Ian Katz, describing the video as a “a powerful reminder that we can no longer trust our own eyes”.

Some experts suggested the broadcast might make the public think deepfake technology was more commonly used than is the case.

“We haven’t seen deepfakes used widely yet, except to attack women,” said Sam Gregory, the programme director of Witness, an organisation using video and technology to protect human rights. “We should be really careful about making people think that they can’t believe what they see. If you’ve not seen them before, this could make you believe that deep fakes are a more widespread problem than they are,” he said.

“It’s fine to expose people to deepfakes, but we shouldn’t be escalating the rhetoric to claim we’re surrounded by them.”

Areeq Chowdhury, a technology policy researcher behind deepfakes of Jeremy Corbyn and Boris Johnson during the 2019 general election, said he supported the decision to highlight the impact of deepfakes but that the technology did not pose a widespread threat to information sharing.

“The risk is that it becomes easier and easier to use deepfakes, and there is the obvious challenge of having fake information out there, but also the threat that they undermine genuine video footage which could be dismissed as a deepfakes,” he said.

“My view is that we should generally be concerned about this tech, but that the main problem with deepfakes today is their use in non-consensual deepfake pornography, rather than information.”

Deepfakes expert Henry Ajder said: “I think in this case the video is not sufficiently realistic to be a concern, but adding disclaimers before a deepfake video is shown, or adding a watermark so it can’t be cropped and edited, can help to deliver them responsibly.

“As a society, we need to figure out what uses for deepfakes we deem acceptable, and how we can navigate a future where synthetic media is an increasingly big part of our lives. Channel 4 should be encouraging best practice.”