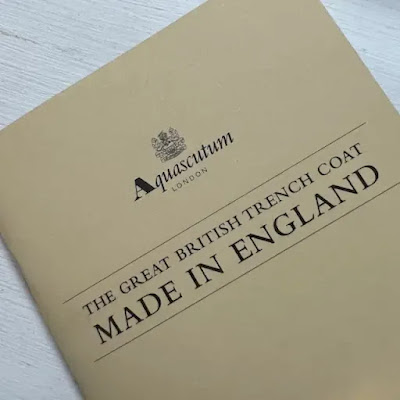 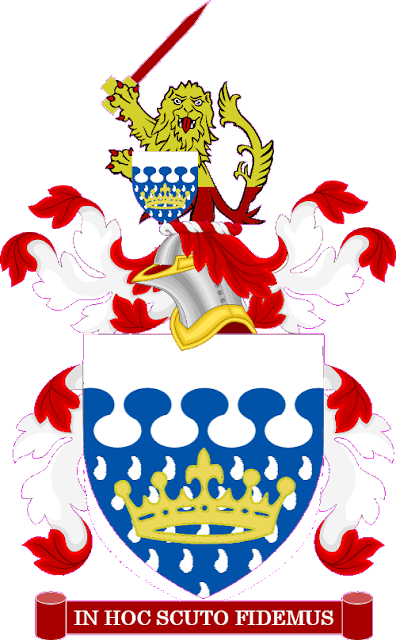 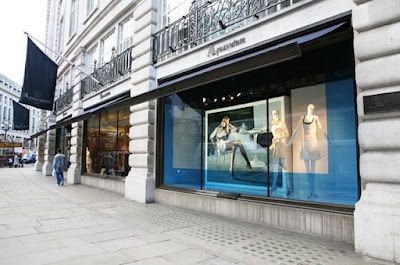 End of an era

On Sunday 7 August, Aquascutum’s iconic store at 100 Regent Street will open its doors for the last time. For the past 110 years, the brand’s formidable London flagship has been at the heart of the capital’s shopping district, but, due to soaring rent prices and a sizeable offer for its lease, is to be no more. Aquascutum’s current owner, Harold Tillman, head of the British Fashion Council, while respecting the heritage of this extraordinary building, is clearly optimistic about Aquascutum’s future elsewhere. ‘It has been a pleasure and a privilege to have owned and be the custodian of such a special building,’ he says. ‘As the Aquascutum brand continues to go from strength to strength and enters a new era, other luxury London addresses are more appropriate for its new flagship store.’ However, even though Tillman is clearly looking to the future, the closure represents a sad day in the luxury label’s rich 160-year history. It’s a day loaded with added poignancy for me, due to the close relationship my family has held with the brand – and the Regent Street store itself – for over 75 years.

Purchased by my great-grandfather Isidore Abrahams in 1932, Aquascutum was later run by my grandfather and his brother, while several members of my family worked within the company throughout the 20th century. For my mother – an Aquascutum womenswear designer for over two decades – 100 Regent Street was a second home. Some of my earliest childhood memories involve stepping out onto the Aquascutum balcony overlooking bustling Regent Street to marvel at the scurrying shoppers below – the same balcony from which my grandmother watched the coronation of Queen Elizabeth II in 1953.

Of course, in today’s fast-moving, hyper-competitive retail marketplace it’s common for shops to open, close and relocate with relentless regularity. But Aquascutum is unlike most brands – it’s a label rooted in heritage, history and stability, and one which has always rejected the temptation of multi-store cross-capital expansion, preferring instead to focus on making the Regent Street shop one of London’s most distinguished retail destinations.

My grandfather’s refusal to upscale and open more stores across the capital helped turn the 100 Regent Street venue into more just a shop – it became a refuge and an unofficial members’ club for celebrities and politicians from both sides of the Atlantic. The greats of the silver screen, from Humphrey Bogart to Peter Sellers, Audrey Hepburn to Sophia Loren, flocked to the store not just to stock up on clothes, but to hobnob with fellow celebs and enjoy the unique, star-studded atmosphere, both out on the shop floor and beyond the imposing third floor back-office wooden doors.

One of the store’s most frequent visitors was Cary Grant, a close family friend and Aquascutum devotee, who spent a great deal of time within the walls of 100 Regent Street. Actress Dyan Cannon – Grant’s wife during the 60s – puts the store’s appeal down to ‘a spirit of oneness that pervaded from the minute you walked in to the minute you walked out’, adding that ‘Cary and I spent a great deal of time together there…because it was a place of warmth – it had a gentleness.’ Margaret King, a former director of the company, who dressed Margaret Thatcher in Aquascutum for several years, describes the venue in similar terms, as ‘such a warm, friendly place’, with a legendary atmosphere that meant that ‘all the stars loved going there.’

Even in today’s very different world, the Regent Street store retains a buzz that few others can match, continuing to attract an eclectic mix of A-list stars, politicians and royals. But despite its fame and status, the shop has now been making a loss for some years, and as a result must be sacrificed for more lucrative brand ventures. Harold Tillman described his current brand strategy to me, stating simply that ‘Aquascutum has got a world recognition, and unfortunately the product hasn’t been available to buy worldwide, so obviously that’s now our intention’ – hinting at increased store openings in Asian markets and a stronger focus on the e-commerce site.

Aquascutum, then, will live on, while the store that has been the brand’s face to the world for over a century will be no more. I’m sure it makes perfect business sense, but for me it still registers as a great loss that one of the capital’s oldest and most loved retail venues is to be consigned to the history books. So this week – whether you’re an ‘Aquas’-aficionado or you’ve never shopped there before – make sure you spare a couple of hours to visit 100 Regent Street. Not only will you find amazing bargains (there’s a big closing down sale), but you’ll also experience one of London’s most iconic retail sites for the very last time. 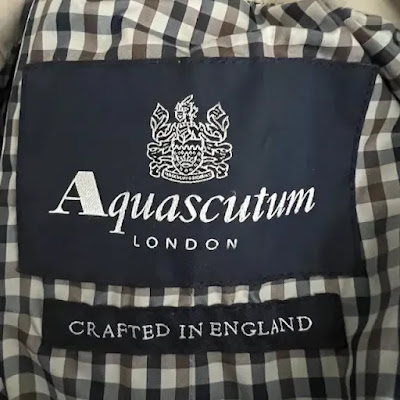 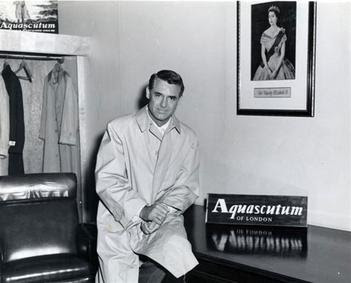 Aquascutum was established in 1851, the year of the Great Exhibition, when tailor and entrepreneur John Emary opened a high quality menswear shop at 46 Regent Street. In 1853, after succeeding in producing the first waterproof wool, he had his discovery patented and renamed the company 'Aquascutum', Latin for 'watershield'. In 1901, Emary moved to 100 Regent Street in the heart of London. The company created other fabrics and coats using similar names, such as the Eiderscutum light overcoat and (in 1962) the multicoloured wool-yarn weave, Aquaspectrum.

Coats for officers in the Crimean War (1853–1856) were made from Aquascutum's waterproof fabric, as were the trench coats worn by soldiers of all ranks in both world wars. Domestic and fashion applications followed, promoted in the 19th century by royal fashion leader King Edward VII; he was Aquascutum's first royal client, ordering an Aquascutum coat in the Prince of Wales check. In 1897, Aquascutum was granted a royal warrant, the first that would mark the British royal family's long patronage of the company. Aquascutum's trenchcoats have been worn by three Princes of Wales, Margaret Thatcher and Winston Churchill. In 1900, Aquascutum opened a womenswear department, offering water-repellent capes and coats, which were very popular among British suffragettes.

The company has supplied aristocrats, political leaders, and actors, including three Princes of Wales, Prince Rainier of Monaco, Winston Churchill, Humphrey Bogart, Lauren Bacall, Sophia Loren, Cary Grant, and Michael Caine. During the 1980s and 1990s, Kingsley Matheson Pink, managing director of the Regent Street flagship store, dressed UK prime minister Margaret Thatcher, including her visit to the USSR, and comprised coats and tailored suits, dresses and evening wear. He also was subsequently responsible for dressing Prime Minister John Major, as well as a number of other international dignitaries including the King of Malaysia.

Aquascutum was family owned until 1990, when it was purchased by Japanese textile conglomerate company Renown Incorporated, and, then, by Jaeger in September 2009. It became the property of YGM Trading, a Hong Kong fashion retailer, in April 2012. In March 2017, YGM Trading confirmed it would sell Aquascutum to Jining Ruyi Investment Co, a holding company of China's Shandong Ruyi, for $117m (£95m).

In 2005, Renown was the Aquascutum ready-to-wear licence holder in Japan with retail value of €50 million. In April 2006, Aquascutum appointed Kim Winser as president and chief executive officer. Winser is a veteran of the British apparel industry, having worked for Marks & Spencer and Pringle of Scotland. The current heads of design are Michael Herz and Graeme Fidler, who won numerous awards including GQ style awards.

In 2008, Renown announced that it would sell Aquascutum, after the parent company experienced three straight years of losses. In May 2009, Renown rejected a corporate buyout bid led by Kim Winser. After the bid was rejected, Winser left Aquascutum. Renown continued acquisition talks with Chinese clothing retailer YGM Trading, which held licenses to sell Aquascutum clothes in Asia - the brand's biggest market. In September 2009, the management team behind the revival of retailer Jaeger, Harold Tillman and Belinda Earl, bought the company. However, on 17 April 2012, the Financial Times published an article citing sources "familiar with the company's plans" stating that the company would shortly go into administration with the potential loss of up to 250 jobs.

In April 2012, the company went into bankruptcy administration. FRP Advisory was chosen to act as the administrators. Shortly after Aquascutum's Asia licensee, YGM Trading, acquired the company for £15 million. In 2013, the Aquascutum factory was again put up for sale, and was purchased by a British owner. The original factory was renamed The Clothing Works. The retailer had to close 14 stores in China, its main market, as well as one in Taiwan. In December 2016, BBC reported that the Company was due to be sold for $120m (£97m) to two buyers, one of which was Chinese textile firm Shandong Ruyi.The unnamed acquirers made a $5m down payment for exclusive rights to the deal.The new owners took over the business in March 2017.

In September 2020, Aquascutum went into administration again.In the same month, Aquascutum granted Trinity Limited exclusive rights to design, manufacture and distribute its products in Greater China and appointed Trinity as its exclusive licensing agent to manage its global licensing business. Trinity is a publicly-listed company on the Hong Kong Stock Exchange and a subsidiary of privately held Beijing Ruyi Fashion Investment Holding Company Limited. Trinity manages four international brands, namely Cerruti 1881, Gieves & Hawkes and Kent & Curwen, which its owns, and D’URBAN, which it operates under a long-term license in Greater China.