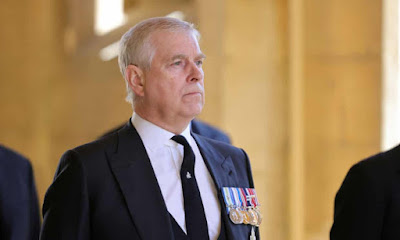 Longtime Prince Andrew accuser Virginia Giuffre’s sexual abuse lawsuit against him can move forward, as a New York judge rejected the royal’s efforts to dismiss her civil claim on Wednesday.

Giuffre, who has alleged that the late financier Jeffrey Epstein and Ghislaine Maxwell sexually abused her, said they forced her into sex with the Duke of York at age 17. She filed suit against the royal on 9 August, citing battery and intentional infliction of emotional distress.

Prince Andrew’s legal team had argued in court papers and proceedings that Giuffre’s 2009 settlement with Epstein shielded him from her lawsuit. The settlement, which was unsealed on 3 January, awarded Giuffre $500,000.

Their agreement contained a provision that stated: “Second parties and any other person or entity who could have been included as a potential defendant … from all, and all manner of, action and actions of Virginia [Giuffre], including state or federal, cause and causes of action.”

Andrew was not mentioned by name in this settlement.

In explaining why he rejected Andrew’s motion to dismiss, Manhattan federal court judge Lewis Kaplan said it was premature to consider the prince’s efforts to cast doubt on Giuffre’s accusations.

He pointed out that this push for dismissal largely relied on the royal’s claims that Giuffre’s complaint was legally insufficient, which, in turn, were rooted in Andrew’s discussion of the 2009 agreement.

Kaplain said: “The law prohibits the court from considering, at this stage of the proceedings, the defendant’s efforts to cast doubt on the truth of Ms Giuffre’s allegations, even though his efforts would be permissible at trial.”

He continued: “In a similar vein and for similar reasons, it is not open to the court now to decide, as a matter of fact, just what the parties to the release in the 2009 settlement agreement signed by Ms Giuffre and Jeffrey Epstein actually meant.

“The court’s job at this juncture is simply to determine whether there are two or more reasonable interpretations of that document. If there are, the determination of the ‘right’ or controlling interpretation must await further proceedings.”

Kaplan’s decision deals yet another blow to the embattled British prince, whose reputation and standing within the royal family has been saddled by his ties to Epstein and Maxwell.

High-profile criminal proceedings against Epstein and Maxwell over the past two years have further damaged his reputation.

Maxwell, the daughter of the late British press titan Robert Maxwell, was found guilty of five counts for luring girls as young as 14 into Epstein’s world for him to sexually abuse.

Epstein, a convicted sex offender who in addition to Prince Andrew, counted former presidents Bill Clinton and Donald Trump in his circle, killed himself in a Manhattan jail about a month after his July 2019 arrest on sex trafficking charges.

Giuffre has claimed that Prince was “sweating profusely all over me” at a London nightclub on a night when they allegedly had a sexual encounter.

Prince Andrew said in a disastrous BBC interview that Giuffre’s statement about his perspiration could not be true, claiming: “I have a peculiar medical condition which is that I don’t sweat or I didn’t sweat at the time.”

Prince Andrew also maintained that on the evening cited by Giuffre, he went with his daughter, Beatrice, to a late-afternoon children’s party at a Pizza Express in Woking. After the party, Prince Andrew claims, he was at home with his children all night.

As part of Giuffre’s suit, her legal team has requested documents that would prove whether or not Prince Andrew can sweat. 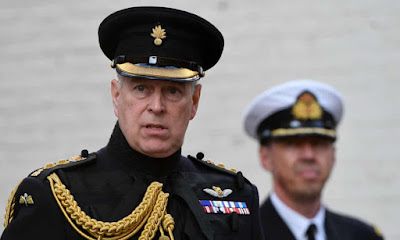 Now Prince Andrew is facing trial, the palace must find a way to ‘de-royal’ him

Whatever the outcome, there is no way back for the prince – and the family will be keen to limit the damage

Well, he’s surely sweating now. One by one, the options are running out for Prince Andrew. He has just lost his latest legal battle after Manhattan federal court judge Lewis Kaplan’s ruling today that the sexual abuse lawsuit against him should proceed to trial, despite his lawyers advancing a variety of technical arguments, including that Virginia Giuffre no longer lives in the US, that she agreed in a 2009 deal not to pursue claims against certain other people, and that the court summons had not been properly served. He now faces a long trial that is likely to cause considerable reputational damage to the royal family in a year when everyone was supposed to be celebrating the Queen’s platinum jubilee.

One possibility left to him is settling with Giuffre out of court. After all, this is what happens in the vast majority of civil litigations in the US, particularly after the attrition of a drawn-out court case begins to bite. But such an option could hit the cash-strapped prince hard in the pocket, given reports that he is trying to sell his £17m Swiss chalet to raise funds just to pay for his legal bills; this is after reports from the palace that the Queen would not bail him out financially. Since Giuffre had already received $500,000 in a legal settlement with Epstein, any settlement could run into the millions of dollars (some reports have put it as high as $5m). If that happened, despite palace denials, the Queen would probably have to intercede with help, just as she did when Charles was faced with a multimillion-pound divorce bill from Diana in 1995.

Whichever way you look at it, Andrew is now a major liability for the royal family and the palace must wish he would just retire to his Royal Lodge home and lead a life of quiet anonymity. Part of the problem, as we discovered with the sudden departure of Prince Harry from the royal hearth, is that there is no clear process of “de-royalling” a royal. Despite his escape to California, Harry was allowed to keep a few of his royal connections in case he ever had a change of heart. The situation of his Uncle Andrew is obviously much more serious and more difficult to decouple.

Today’s ruling represents a victory for Giuffre’s team and, from her point of view, a positive step. But even in the best-case scenario for Andrew, if the legal process went to a full trial and he successfully defended himself, the reputational damage to him and the royal family would still be done. The fact that he had numbered among his friends two people who were convicted sex criminals would tarnish his name for ever. There is no way back for Andrew. Whatever the difficulties, the palace may have to find some way to “de-royal” him – he is for all intents and purposes an ex-royal and faces a lot of sweating in the year to come.

David McClure is the author of The Queen’s True Worth 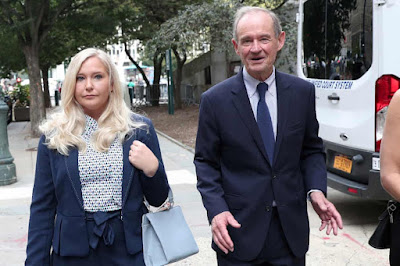 Prince Andrew: the lengthy and embarrassing legal ordeal ahead

The lawsuit brought by Virginia Giuffre in Manhattan is likely to go to trial by jury, US legal experts say

When a Manhattan judge rejected Prince Andrew’s efforts to dismiss Virginia Giuffre’s sexual abuse lawsuit against him on Wednesday, it marked a victory for his longtime accuser.

Judge Lewis Kaplan’s ruling also means that the embattled royal will remain embroiled in lengthy – and embarrassing – legal proceedings for the foreseeable future.

“This is a huge development because it clears probably the biggest legal hurdle Virginia Giuffre and her team had to get her case to a jury,” said Neama Rahmani, a former federal prosecutor and co-founder of West Coast Trial Lawyers.

Giuffre, now 38, has long alleged that she was coerced into sex with the Duke of York at the age of 17 by two of his associates – the disgraced American financier Jeffrey Epstein and British socialite Ghislaine Maxwell. Andrew’s lawyers did not immediately respond to a request for comment on Kaplan’s decision.

Epstein, a convicted sex offender, killed himself in a New York jail in summer 2019 pending trial on sex-trafficking charges. Maxwell was found guilty on 29 December of sex-trafficking and related charges for bringing teen girls to Epstein.

Giuffre first alleged in legal papers filed in 2015 that she was forced to have sex with the prince in Epstein’s New York mansion, on his private island in the US Virgin Islands, and at Maxwell’s London home.

Giuffre filed the civil suit against the prince in Manhattan federal court in August of last year, also accusing him of battery and intentionally inflicting emotional distress.

His lawyers contended that a 2009 settlement between Giuffre and Epstein shielded him from her lawsuit. They pointed to a clause that released “second parties and any other person or entity who could have been included as a potential defendant … from all, and all manner of, action and actions of Virginia [Giuffre], including state or federal, cause and causes of action.” Andrew was not named in this settlement.

Andrew also argued that Giuffre’s claims were too vague, meaning that he wouldn’t be able to adequately defend himself against the allegations. Kaplan rejected the vagary-based claim and said it would be premature for him to decide on what, exactly, the 2009 settlement meant for Andrew.

Rahmani pointed out that “the vast majority of civil lawsuits settle for a number of reasons”.

Victims might not want to testify in public about sexual abuse. Defendants, meanwhile, don’t want to face judgement should juries find in favor of accusers – nor the continued onslaught of bad press that can increase with a public trial.

However, Rahmani believes this is the rare civil case that is more likely to go before a jury than settle. Giuffre previously settled “for what I would say is an insignificant amount – a nominal amount, pennies on the dollar” for a sexual abuse claim against mega-millionaire Epstein.

And, unlike many others, Giuffre has openly discussed her trauma. She did not testify at Maxwell’s trial, so “this is her one chance to tell her story in a very public way”, Rahmani said.

The prince might also be opposed to settlement for his own reasons. “Prince Andrew has denied that this ever happened, so if he enters into any settlement – even if there’s no admission of liability, even if he tries to keep it confidential, even if it’s not for legal reasons – for PR, reasons, I think this case is going to move forward,” Rahmani said.

“There’s just a number of factors that make this a very unique civil case, which is why, I think, much, much, much more likely to go to trial than your other civil cases.”

Andrew can fight Kaplan’s ruling, either by asking the judge to reconsider, or asking an appeals court to review the decision, though the odds are not in his favor.

“An appeal will be very difficult,” said longtime defense attorney Julie Rendelman. “It was made very clear that the issues that were raised by Prince Andrew’s attorneys are something that are a question of fact, not a question of law and therefore, something that a jury needs to decide, not the judge.”

“When you look at the decision that the judge wrote, it covers all the bases in terms of all the issues raised, and I think that particularly when it comes to a question of fact for a jury, an appeals court is hard pressed to step on that decision-making process.”

Andrew contends that on the night Giuffre claims she was forced into sex with him in London, he had brought his daughter, Beatrice, to a late-afternoon children’s party at a Pizza Express in Woking, Surrey. The prince insists that he was then at home with his children all night.