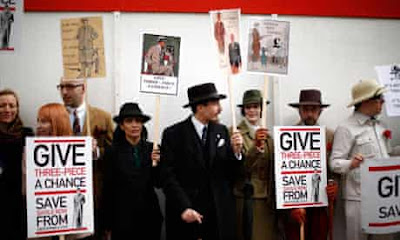 This article is more than 9 years old

Gustav Temple This article is more than 9 years old

The Row has been the heartland of English bespoke tailoring for 200 years. This is not the place for T-shirts and cargo pants

A modest band of immaculately dressed chaps and chapettes descended upon Savile Row on Monday to protest against the opening of a children's store by Abercrombie & Fitch. We felt rather strongly that Savile Row is not the right sort of street for the sale of T-shirts, cargo pants and thongs with suggestive slogans on them.

The Row is the heartland of English bespoke tailoring, source of the most beautifully crafted suits in the world. It was here that tailors made the uniform worn by Horatio Nelson when he was killed at the Battle of Trafalgar; it was here that Edward VII invented the dinner jacket. Savile Row is where the 20th century's most iconic fashion moments were dreamt up: production on Hollywood movies would be halted while actors from Rudolph Valentino to Frank Sinatra were flown over to the Row to have a waistcoat cut properly. Anderson & Sheppard made Fred Astaire's tailcoats, and kept a section of carpet loose, to be peeled back during his fitting so he could ensure the tailcoat flowed around his body correctly by dancing a few steps.

Savile Row has maintained its excellent reputation for over two centuries, surviving hard times and boom times and even occasionally moving with the times. In the 1960s, Tommy Nutter opened a shop on Savile Row and made flashy flared tweed suits for Mick Jagger and Elton John; but he made them with as much care and professionalism as he would have made a morning coat for the Prince of Wales.

You can go to practically any street in any city in Britain and buy the sorts of clothes peddled by Abercrombie & Fitch. You cannot, however, go to any street in the country to get a bespoke suit, and this is why the trade should remain where it is – so that when the time eventually comes that we can afford Savile Row's prices, we know where to go.

The opening of an Abercrombie & Fitch store could well sound the death knell for the Row. The Kooples, another trendy clothes chain not offering a bespoke service, has already lodged an application to open a store at No 5, Savile Row. Within 20 years, the Row could easily become just another London street full of the sorts of global brands that have branches in every major European city.

It isn't as if bespoke tailoring is in decline. There has been a recent regeneration of the trade and many Savile Row tailors are doing very well. Richard James and Ozwald Boateng both moved into the Row in the last decade, and their arrival was greeted with suspicion by the established tailors. Yet they have both proved that Savile Row can be modernised in keeping with its ancient traditions and that bespoke tailoring can continue to flourish as a trade. The cost of a bespoke suit is high – as much as £3,500 on Savile Row – but there are many luxury stores on Bond Street that will charge you similar amounts for an off-the-peg number.

One of the few connections between Abercrombie & Fitch and Savile Row is the huge mark-up. In traditional tailoring houses, this is because a bespoke suit takes up to 10 weeks to construct, over 60 hours of labour and numerous fittings. In the case of Abercrombie & Fitch, it is because it has used aggressive marketing campaigns to attach a high premium to the letters A and F, especially when cut from frayed bits of denim and glued to a T-shirt.

What reverence has Abercrombie & Fitch for the tradition or heritage of Savile Row? It is only interested in the street's iconic status on the tourist map. Its flagship store on Burlington Gardens, which abuts the Row, has already spoiled the ambience of old-world gentlemanly charm. Endless queues of teenagers spill along Savile Row, blocking the entrances to tailors and giving traffic on the Row even less room to manoeuvre.

In a deeply ironic twist, a source in the tailoring trade has revealed that Mike Jeffries, CEO of Abercrombie & Fitch, has his suits made on Savile Row. So the man whose company wants to desecrate the Row clearly values its product much more highly than he values its origin. If you had enjoyed a fine lunch at Le Gavroche, would your response be to open up a McDonald's next door?

If Abercrombie & Fitch is allowed to open its store on Savile Row, others will follow: eventually, the Row will become like any other street in the world, full of chain stores selling clothes that can be bought in Madrid, Dubai or Tokyo. Where will Jeffries get his suits made then?