Ten years in the making, this Julian Fellowes period drama set in New York is a pale echo of the original that inspired it. 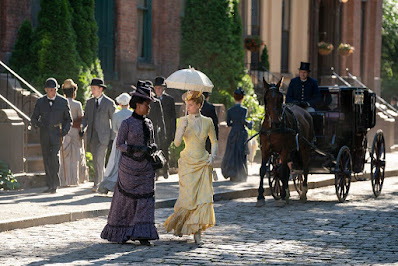 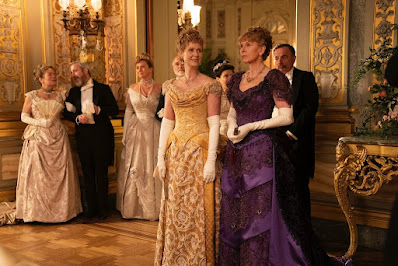 Julian Fellowes chased his new series, “The Gilded Age,” for a decade. Call it his white whale. Beginning Monday on HBO, you can watch it drag him and a large, talented cast beneath the waves.

What would become “The Gilded Age” began in 2012 as Fellowes’s idea for a prequel to his “Downton Abbey,” the upstairs-downstairs British costume drama that was a monster hit for PBS in the United States. The early years of “Downton” were a smooth, charming blend of family melodrama and pastoral comedy, but charm faded and contrivance grew over the course of six seasons, and by the time the series ended in 2015 the idea of a spinoff had lost some of its luster.

Fellowes persisted, though, even as he wrote other series, like the highly entertaining Georgian drama “Belgravia” (2020). “The Gilded Age” hung around, switched networks (from NBC to HBO) and, when it finally started filming, underwent a pandemic delay. After all that time, it’s sad to report that the show, while no longer a “Downton” prequel, looks like a slacker and more superficial rehashing of character types and situations familiar from the earlier series. (Five of nine episodes were available.) Perhaps all that time had something to do with it.

Set in New York in 1882 (about 30 years after “Moby-Dick” was published there), the series opens as a new-money family, the Russells, move into their Stanford White-designed mansion on Fifth Avenue, across the street from the less luxurious but more respectable house of the old-money sisters Agnes van Rhijn (Christine Baranski) and Ada Brook (Cynthia Nixon).

George Russell (Morgan Spector) is a Vanderbilt-style railroad tycoon and robber baron, and his wife, Bertha (Carrie Coon), is fiercely dedicated to forcing her way into New York society. Their arriviste status is established right away, with the appearance of wagons carrying crates of statuary presumably ransacked from European homes and churches.

This is Henry James and Edith Wharton territory, and Fellowes doesn’t shy away from comparisons. A scene set at the Academy of Music, once New York’s primary opera house, directly invokes Wharton’s “The Age of Innocence”; a scene in which a mercenary suitor is sent packing is straight out of James’s “Washington Square” and its theatrical adaptation, Ruth and Augustus Goetz’s “The Heiress.”

And there is an ingénue, Marian Brook (Louisa Jacobson), the niece of Agnes and Ada, who is reminiscent of many young women in James’s and Wharton’s novels, though she’s neither as innocent, as tragic nor as compelling as those models. She arrives at her aunts’ house to serve as audience surrogate and provide some romantic interest in counterpoint to the genteel yet brutal social and economic warfare that make up the central story. Through highly improbable circumstances, she also brings with her an aspiring writer, Peggy Scott (Denée Benton), a young Black woman who becomes Agnes’s secretary and allows Fellowes to account for race alongside class and gender in his portrait of 19th-century New York.

It’s a muddled and slapdash portrait, though — a thin gloss on its superior sources that consistently dips into caricature. Fellowes’s heart doesn’t seem to have been in it; certainly his ear wasn’t: “They own the future, men like Mr. Russell,” we’re told, and, “You’re a New Yorker now … and for a New Yorker anything is possible,” and on the other hand, “You belong to old New York, my dear, and don’t let anyone tell you different!”

The shopworn dialogue jibes with the largely one-note characterizations, seen most egregiously in the hidebound widow Agnes, who seems to have no thoughts beyond her distaste for the nouveau riche. In general, the conservatism and provincialism of the old guard is so overdrawn, and presented with such little context, that the society women seem like they’re from outer space, and the actresses playing them can’t do much to make them human.

One of the glories of “Downton,” of course, was the excellence of its performers, many of whom were not well known in the United States beforehand. For “The Gilded Age” HBO has assembled a starrier cast, but most of the actors fall victim to the obviousness of the material. Baranski’s usual brilliance is muffled; she’s the designated zinger deliverer, like Maggie Smith in “Downton,” but the effect isn’t there. Nixon tries hard but can’t find anything consistent to play in Ada, who’s always on the verge of hysterical-spinster caricature. Bertha is a slightly more rounded character — the story is generally more sympathetic to the people of the future — but her grim social climbing isn’t that much more interesting than Agnes’s snobbery, and Coon seems as uncomfortable as her castmates. Other performers go straight to mugging, like Nathan Lane as the social arbiter Ward McAllister.

There’s an awful lot of talent onscreen, though, and some performers register in smaller roles. Kelli O’Hara is good as a society wife trying desperately to straddle the gap between old and new. Audra McDonald conveys strength and compassion as Peggy’s concerned mother. And Sullivan Jones jolts the show to life in a brief appearance as the editor of a Black newspaper that publishes Peggy’s writing.

In “Downton,” Fellowes succeeded by cutting out the larger world and grounding his story in the daily rhythms of one family and one estate. In “The Gilded Age” he lets the world in, and yet everything seems smaller. The domestic workers go through the same soap-opera motions we enjoyed in “Downton” but feel superfluous to the story; New York’s social circle is called the 400, but here it feels more like the 12 or 15. And while the costumes and interiors are lavish, the Fifth Avenue streetscapes are now backlot constructions fleshed out with computer graphics — you don’t even get the authentic glory of the manor house. As the countess of Grantham said, things are different in America. 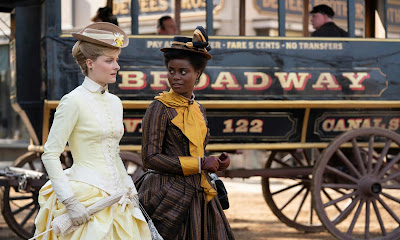 All of human life is here. Not in any credible way – just here … The Gilded Age.

Forget Downton … here’s the new and definitely not improved Brownstone Abbey – and these posh Americans spout nothing but drivel. Does Fellowes actually write this stuff in his sleep?

Boost your vaccinations, don whatever PPE you have to hand – the new variant Julian Fellowes has breached our shores. This time, his typing is set in late 19th-century New York. Yes, it’s Brownstone Abbey. Its official title is The Gilded Age (Sky Atlantic), but we all know what we are dealing with. There are posh people – the old families who have been in New York since it was a glint in a Dutchman’s eye. Then there are the upstart types who made buckets of stinky new money building railroads and are now busy building mansions all over Manhattan and trying to lay down tracks into smart society. We’ll call them the Shamderbilts. And then there are servants, who live beneath these posh people and bitch about them whenever the restraining influence of the butler is absent.

We lay our scene in Central Park. It is 1882 it’s full of sheep. They turn and run from the camera. It is a wise move, all things considered.

The first note struck is a sorrowful one. Miss Marian Brook (Louisa Jacobson, who is still young and will survive the dialogue that is soon to come her way) learns that the death of her father, Henry, has left her penniless and that she will be thrown on the mercy of her two aunts. “Don’t worry, Mr Riggs,” she says, smiling bravely at the handsome young solicitor who has had to break the news. “I’m not beaten yet!” “At the risk of impertinence,” he replies, because Fellowes knows “impertinence” is a very 1882 word, “I’d say you are a long way from being beaten, Miss Brook.”

Get used to this kind of drivelling redundancy, folks, because there is an awful lot of it. Also, everyone is using that strange voice Americans do to indicate that they are posh in the past – it mixes precise diction with a strained tone, as if they are all having a hard time on the loo. Which, actually – well, never mind. We needn’t labour the point.

Marian’s aunts (or “auurahnts” as it is pronounced in 1882) are Cynthia Nixon as Ada Brook, presumably as punishment for letting And Just Like That … go ahead, and Christine Baranski – who must have a very persuasive agent – as Agnes van Rhijn. ’Tis Agnes who holds the purse strings and is most conscious of the standards to be upheld by her and her peers. She and they are aghast at the arrival of the Russells. Mr George (Morgan Spector) is a robber baron (“I may be a bastard, but you are a fool” is a thing he says) and has built his castle opposite Agnes’s elegant home, much to her displeasure. His wife (Carrie Coon) is a social climber who has her finger on the pulse. “We cannot succeed in this town without Mrs Astor’s approval, I know that much,” she tells George when he is taking a brief break from intimidating aldermen and crushing rivals under the weight of his fortune.

All of human life is here. Not in any credible way – just here. Marian acquires a young black woman, Peggy Scott (Denée Benton), as a friend on her journey to her aaughuhaunts. She is taken on as a live-in secretary by Agnes so Fellowes can develop as nuanced a portrait of race relations in turn-of-the-century New York as he does of class. It is agony, but no more so than the rest.

There is a younger set – indistinguishable apart from Agnes’s son Oscar and John Adams (John Quincy Adams’s great-grandson, dontcha know), who have a shared feature that will upset Mama no end when she finds out – who care not a jot for convention, so that love across the new/old money divide can play out. “I only ask that you never break your own moral code,” says Aunt Ada, whom I suspect should not be allowed to cross Fifth Avenue unaided. “How wise, Aunt Ada!” says Marian. I will have to look up whether taking the piss had been invented by 1882. And there are secrets among the servants. Miss Turner hates Mrs Russell and is bidding for an affair with Mr Russell. The Van Rhijn butler Bannister (Simon Jones) says he has nothing to hide, which makes me suspect he has something to hide.

In short, it’s just what HBO ordered from the man who by now is surely actually churning this stuff out in his sleep rather than simply giving the faultless impression of it.