THE CHAP OLYMPIAD. Saturday 16th July, London. The nation's most challenging sporting occasion - if your idea of a challenge is pitting your finest trouser creases against another man's, or seeing who can hurl a plate of cucumber sandwiches with the most panache. The Chap Olympiad is open to all comers, male or female, moustachioed or clean shaven, top drawer or bargain basement, just so long as you are keen to cut the mustard on the field of drachms. 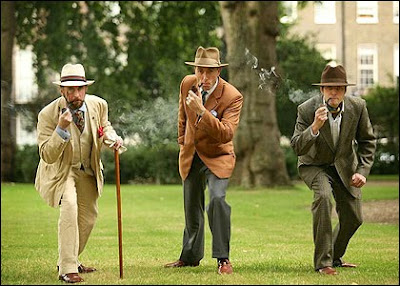 The egg and spoon, the three legged race, the tug of war… all classic sports day games that are just a distant memory of a simpler time; for most of us anyway. But for all the chapps and chapettes, once a year in Central London, a group of vintage enthusiasts come together to celebrate a bygone era, & compete in the Chap Olympiad.
The concept is simple: Wear your finest 1930s attire & come together to compete in the games. It’s all red lippy, set curls & braces. The 2010 Chap Olympiad was held on 17th July 2010 in a beautiful Georgian Square in Central London.
Editor of The Chap magazine and Olympiad enthusiast Gustav temple has been there since the start. ‘It all started in 2003 with 25 people in regents Park, & has now grown to over 1000 competitors.’
‘We encourage cheating – sportsmanship is not the chap way. Points are awarded for panache, not talent,’ he added.
One of the most popular events is the cucumber discus, where competitors throw a plate with a cucumber sandwhich on top, & the distance between the sandwhich & the plate when they land is used to determine the winner. Gustav recalls, ‘One guy used his braces as a catapult, showing great panache, & getting lots of points.’
Some of the games events, like the umberella jousting, can get quite violent, but Gustav says the vintage dress comes in very handy. ‘The bowler hat was originally designed as a form of protective headgear, & if you fall to the ground in a good tweed suit, no scratches are getting through that – they were made for shooting and hunting.’
The Chap Olympiad is a delightful day of themed sporting events, live music, sideshows and refreshments. Running annually, The Chap Olympiad has become Britain’s most eccentric sporting event, attracting Londoners to this now famous celebration of athletic ineptitude and immaculate trouser creases. Hosted by The Chap Magazine (a monthly journal celebrating tweeds, hat doffing and Martinis) & Bourne & Hollingsworth (the fellows behind Blitz Party & Prohibition), The Chap Olympiad is an eye-catching spectacle. All Olympiad guests & participants are encouraged to come in period dress & fully immerse themselves in the event’s old-fashioned activities & charming entertainment.
Don’t worry if your sporting skills are a bit off, it’s all about showing off. As Gustav says, ‘A chap will sacrifice a good sporting performance for the sake of an immaculate trouser crease.’ 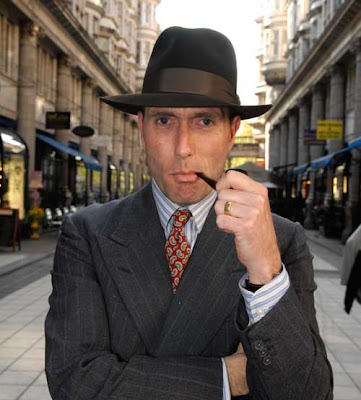 Albion Magazine on line, Winter 2008
Suits You, Sir: an Interview with Gustav Temple of The Chap 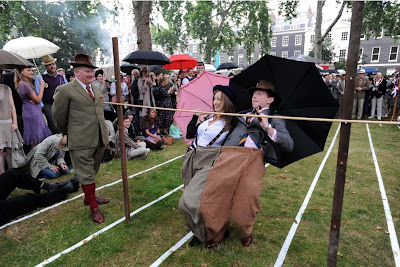 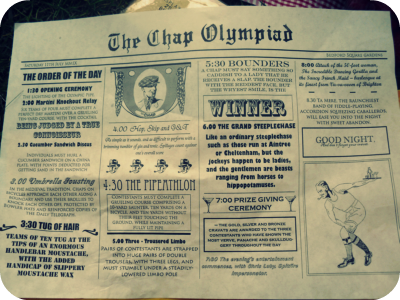