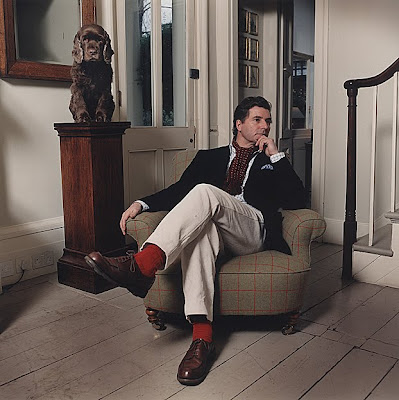 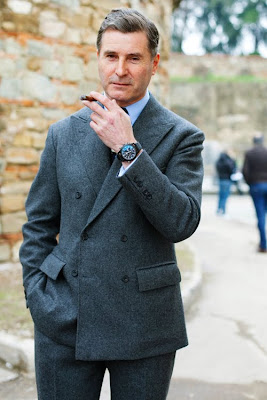 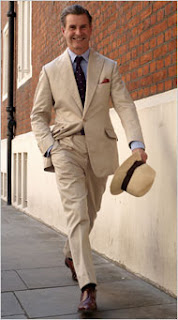 By SUZY MENKES in New York Times
Published: January 11, 2010
arda Tano
Mr. Hackett, now 56, above, created in the stores a blue-chip image for himself. 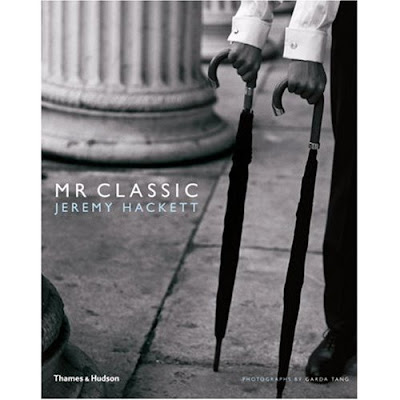 Mr Classic by Jeremy Hackett, Photographs by Garda Tang
Thames & Hudson, May 2008
200 pages/hardcover/136 photographs
Jeremy Hackett is Mr Classic. Having a clothing label for decades plus writing a column for the U.K.’s The Independent on Sunday are excellent platforms for influencing men’s fashion. But what decidedly earns Hackett this moniker is his talented facility for reviving the proper styles once worn by Britain’s aristocracy with modern practicality. For his book, Mr Classic, London-based photographer Garda Tang shoots Hackett’s models with fitting technique. Every bow tie, every just-so lifted chin neatly accentuates Hackett’s vision of gentlemanly chic. The looks are respectable and refreshing, not stuffy or stagnant.
Mr Classic explains the nods and shakes over every outfit detail from shoe polish and floral prints to wearing “serious” cufflinks. Tang stages athletic, social, business, casual and seasonal occasions. He blends an original mix of old and new in his photographic coverage. A lad playing near a tire rubbish heap wears a navy blue newsboy cap, white button-down shirt and tan cuffed trousers that match both the Band-Aid on his hand and the tips of his slip-on sneakers. The shot is propped with a vintage model racing coupe in red, the color of his suspenders. Among Tang’s black-and-white shots, a swimmer demonstrates how goggles pair nicely with belted shorts and no shirt; a pinstripe-suited businessman in a bus stop shelter wears his bowler smartly tipped while tapping on his laptop.

Tang’s flair for capturing the mood of each topic for Mr Classic is spot-on. When Hackett clarifies that a man’s pajamas are no giggling matter, Tang responds with an appealing interpretation. A yawning man with bedhead revealing a touch of his bare belly, appears perfectly fine in wrinkled PJs made of shirt linen fabric. Shown at his front door, he holds a metal basket with bottled milk and biscuits; opposite, a cat enjoys her morning meal from the window ledge. Cat-in-the-sill lace curtains crown the scene. The photo’s effect is a grin just short of a snigger.


With Mr Classic, Hackett’s amusing narrative and Tang’s spotless photographs seamlessly combine to create a rallying cry for the Sharp Dressed Man. The book eloquently hints that certain attire—such as those pilled, ankle-gathered sweatpants—will no longer do. Don’t be surprised if after undertaking this study, there is a compulsion to dust off the holiday tasseled loafers and go for a stroll. Maybe add a striped shirt for sport. 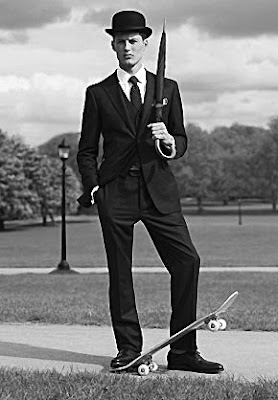