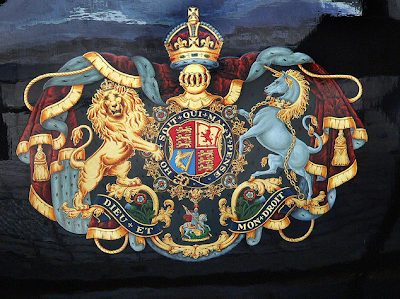 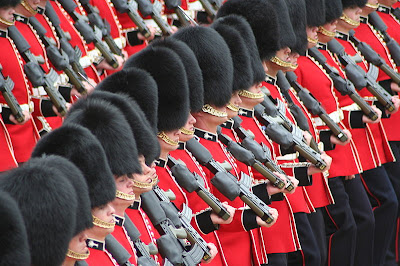 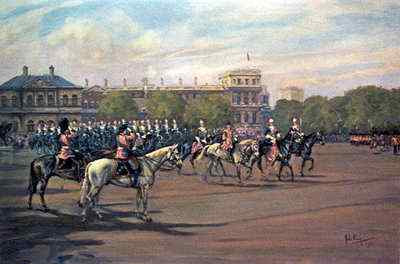 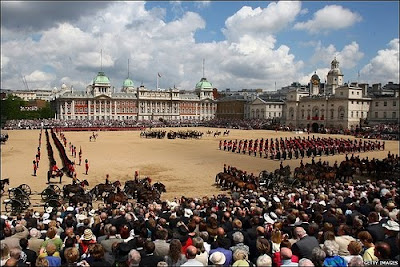 Trooping the Colour is a ceremony performed by regiments of the Commonwealth and the British Army. It has been a tradition of British infantry regiments since the 17th century, although the roots go back much earlier. On battlefields, a regiment's colours, or flags, were used as rallying points. Consequently, regiments would have their ensigns slowly march with their colours between the soldiers' ranks to enable soldiers to recognize their regiments' colours.
Since 1748 Trooping the Colour has also marked the official birthday of the British Sovereign.[1] It is held in London annually on the second Saturday in June[2] on Horse Guards Parade by St James's Park, and coincides with the publication of the Birthday Honours List. Among the audience are the Royal Family, invited guests, ticketholders, and the general public. The colourful ceremony, also known as "The Queen's Birthday Parade," is broadcast live by the BBC.
The Queen travels down The Mall from Buckingham Palace in a Royal Procession with a Sovereign's Escort of Household Cavalry (also known as "Mounted Troops" or "Horse Guards"). After receiving a Royal Salute, she inspects her troops of the Household Division, both Foot Guards and Horse Guards. The King's Troop are also in attendance. Each year, one of the Foot Guards regiments is selected to troop their colour through the ranks of guards. Then the entire assembly of Household Division conducts a March Past around the Parade past the Queen, who receives their salute from the Saluting Base. (The Mounted Troops perform a Walk March and a Trot Past, and the King's Troop rank by with their guns, which are their colour.)
The music is provided by the Massed Bands of the Foot Guards and the Mounted Bands of the Household Cavalry, together with a Corps of Drums and occasionally pipers, totalling approximately 400 musicians.
On return to Buckingham Palace, the Queen watches a further march past from outside the gates. Following a 41-gun salute by the King's Troop in Green Park, she leads the Royal Family onto the palace balcony for a Royal Air Force flypast. 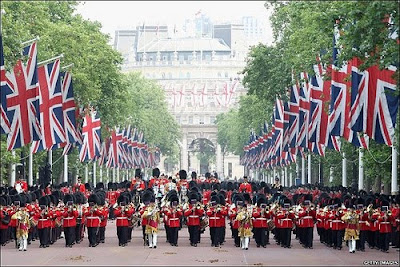 Trooping the Colour
Each year this military parade and march-past marks the official birthday of the Sovereign. It is a colourful event, replete with pageantry and tradition, and is a great favourite with visitors to London.
The troops taking place in the parade are fully trained, operational troops from the Household Division. The Queen's Colour of a battalion of Foot Guards is 'trooped' (carried) through the ranks in front of the Sovereign. One colour is trooped each year, and five Household regiments - Grenadier, Coldstream, Scots, Irish and Welsh rotate each year.
Over 1,400 officers and men take part in the parade, along with over 200 horses. There are over 400 musicians from ten bands and corps of drums. Some 113 words of command are spoken by the Officer in Command of the Parade.
The ceremony has a long tradition, dating back to the 18th century when guards and sentries of the Royal Palaces were mounted daily on the Parade Ground by the Horse Guards building. The colours of the battalion were carried slowly through the ranks, so that the soldiers would learn to recognise the colours of their own regiment. In 1748 it was decreed that this parade would also mark the official birthday of the Sovereign.
Since 1987 the Queen has attended the parade in a carriage; formerly, she attended on horseback, riding side-saddle and wearing the uniform of the regiment whose colour was being trooped.
The parade route runs from Buckingham Palace, along Whitehall, and back again. As the clock on the Horse Guards building strikes 11.00, the Royal Procession arrives and the Queen takes the Royal Salute. After the parade the Royal Family take their places on the balcony at Buckingham Palace to watch an RAF flypast. 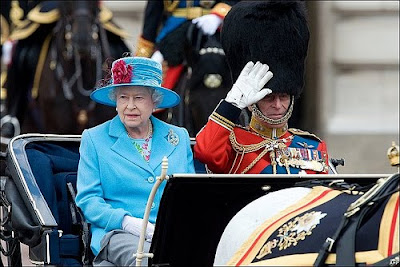 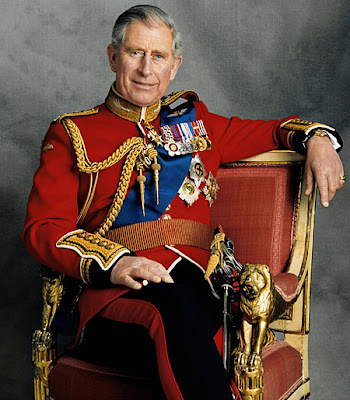 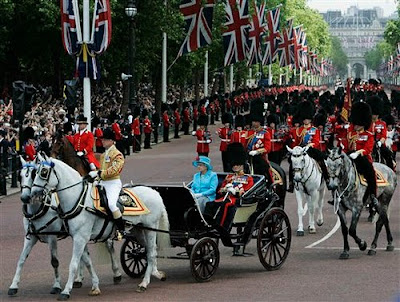 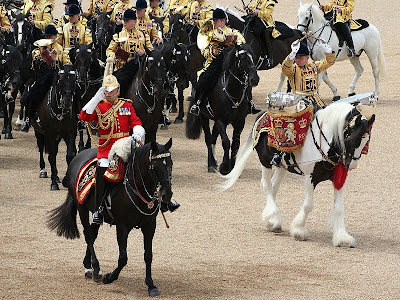