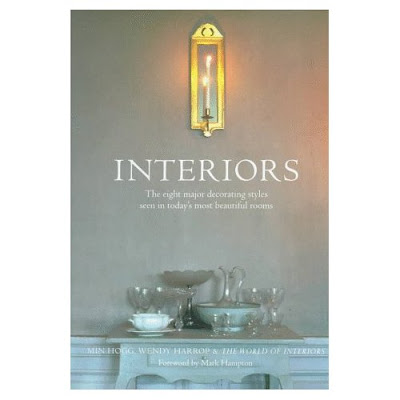 The first time I saw this miracle of glorious "shabby chic" and ancestral authenticity was in this, quite old, version of the 'World of Interiors'(1988) compilation by Min Hogg and Wendy Harrop ... placed under the label 'ancestral'...
The Marchioness, herself a Human Monument, 'stroke' me and left me an enduring impression ... Enjoy ... Yours ... Jeeves 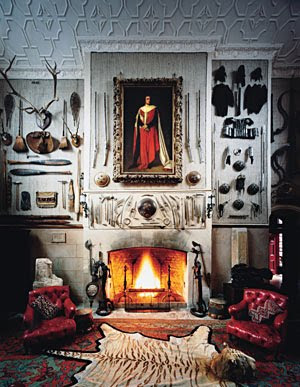 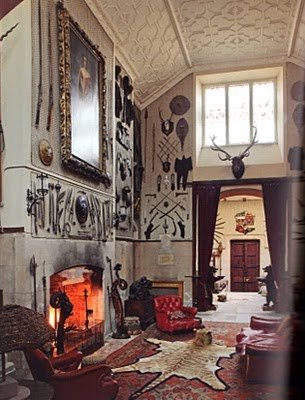 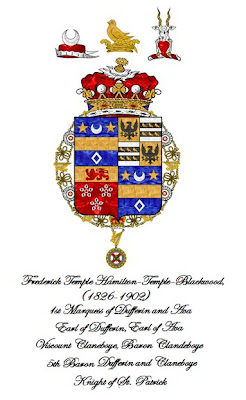 Clandeboye by Peter Rankin of the Ulster Architectural Heritage Society.

One of the most extensive examples of Victorian parkland planting in Ulster, this important 800 acre parkland was created out of the core of an earlier 18th century designed landscape. The demesne was founded in the early 17th century, depicted on Raven’s Map of 1625-6. Formerly known as Ballyleidy, there were a number of earlier houses near the site of the present mansion, including a modest late 17th century house and a three-storey gable-endedhouse of ca 1760.


The present house (above) was designed by Robert Woodgate in 1801-04, for James Blackwood, 2nd Baron Dufferin. It is a conventional two-storey Georgian block in ‘Soanic’ style, with two main façades at right angles to one another; the east façade, being the original entrance front, has seven bays with a pedimented Doric portico.

The formal landscape that accompanied the old 18th century house was swept aside in the early 19th century for a good quality, professionally designed landscape park, possibly the work of John Sutherland (1745-1826). In the late 1840s Frederick Temple Blackwood, having succeeded his father as 5th Baron Dufferin in 1841, started to undertake alterations to the house, notably by moving the entrance from the south to the west.

The park was re-modelled and expanded very considerably in size, this being in part the work of James Fraser (1793-1863), the best-known exponent of Picturesque landscaping in Victorian Ireland. Much of the work provided employment in the years after the famine, and involved the closing of the public road, sweeping away surrounding fields and farm buildings and, in their stead, planting new belts, screens and sweeping deciduous woodlands.

Between 1852-62 a number of lakes were dug, notably a great lake with islands to the south and east of the house. On the west side of the demesne a two-and-a-half-mile avenue was created to provide access to the private family railway station at Helen’s Bay to the north, itself built in baronial style and approached via a splendid turreted arch, both built to designs of Benjamin Ferrey.

On a hill in the southern sector of the park William Burn was commissioned in 1848 to design a castellated tower; this was not completed until 1862 and was named Helen’s Tower by Lord Dufferin, in honour of his mother, Helena Selina, a grand-daughter of Richard Brinsley Sheridan.

The 5th Baron, later 1st Marquess of Dufferin and Ava, having become a well-known statesman and diplomat, including Governor-General of Canada and Viceroy of India, had greater ambitions for Clandeboye: notably, he engaged William Henry Lynn from 1865 to build a grand new house in Scottish baronial style, but this project was never undertaken. During his extensive postings abroad, exotic trees were brought back and planted in a Pinetum, mentioned by Lord Headfort in 1932 in Conifers in the Parks and Gardens of Ireland.

Today the demesne is a successful and maintained amalgam of woodland, farm and golf course. The ornamental planting is mainly to the north-east and south-east of the house in the form of different compartments begun at different times. An 1890s formal terraced garden at the house, incorporating steps, balustrated and terra-cotta vases, is now grassed over; but the 20th century additions are still maintained. These include The Conservatory Garden, which is an enclosed garden near the house of 1938; Brenda’s Garden – an informal planting in a woodland glen begun in the 1930s and now extending east; and an arboretum that was begun in the 1960s to the north-east of the house.

The former Bear Garden, close to the house, provides the setting for a formal Bee Garden created in the 1980s as the setting for a Bee House which was donated by Colonel Greeves of Altona House. More recently, in 1990, the Sheridan Garden was created, in memory of the 5th and last Marquess, in a previously laurel-infested woodland setting. The walled garden is used by Conservation Volunteers and modern glasshouses outside are in use for the house.

Following the death of the 5th Marquess in 1988, a number of environmental projects and charities at Clandeboye were begun, including the Prince’s Trust and the NI branch of the Woodland Trust, established in 1998 in partnership with the Dufferin Foundation and a link with Kew Gardens. In the courtyard is Dendron Lodge, the ‘Clandeboye Environmental Centre’ used by the Conservation Volunteers Northern Ireland for meetings, workshops and accommodation.

The Blackwoods are of Scottish settler stock. The family had established themselves in County Down by the early 17th century, and over the next two centuries they steadily increased their landed property and social and political influence. Among their marriages were a late 17th and a mid-18th alliance with the Hamilton family of Killyleagh Castle, County Down, formerly Viscounts Claneboye, alias Clandeboye, and Earls of Clanbrassil from whom they inherited considerable property.

By the late 18th century they were a prominent, though far from dominant, landed family in the county. Up to the mid-1820s the Blackwoods, even though a peerage family, in reality belonged to the provincial gentry, overshadowed in their own county by the more cosmopolitan and much richer Marquesses of Downshire and Londonderry. For a fuller history of the family, the Dufferin Papers are held at the Public Record Office of Northern Ireland.

The 4th Marquess, who married Maureen Guinness, grand-daughter of 1st Earl of Iveagh, was said to have been a gifted young man of extraordinary charm. Like his grandfather, the 1st Marquess, he combined intellectual, literary and artistic gifts with ambitions in public life. His death in 1945 while on active service in Burma was a bitter blow to family and friends, including the future Poet Laureate, John Betjeman.

The 5th and last Marquess thus succeeded to the title aged six. He married his cousin Belinda (Lindy) Guinness at Westminster Abbey in 1964. The 5th Marquess is survived by one of his sisters, Lady Perdita Blackwood, who lives at Cavallo Farm, near Clandeboye.

The 5th and last Marquess died in 1988 and, since there was no issue, the estate passed to his widow, the Most Honourable Serena Belinda (Lindy) Rosemary Marchioness of Dufferin and Ava. The marquessate itself is now, sadly, extinct. Lindy Lady Dufferin inherited a considerable fortune at the time, not least due to the Guinness connection. She also inherited Clandeboye Estate and a London home in Holland Park. Clandeboye Estate comprises about two thousand acres of prime Ulster woodland and gardens.

Lady Dufferin has a continuing interest in the Arts and is a keen painter. She is also interested in conservation matters. 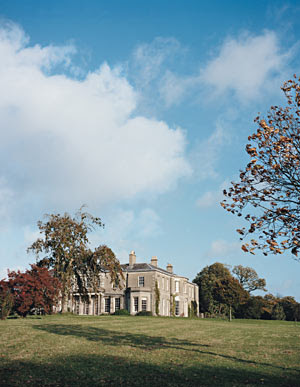 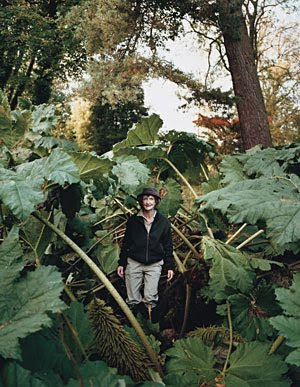 The Marchioness
A member of the fabled and complicated Guinness family by birth and marriage, Lindy, the Marchioness of Dufferin and Ava, presides over Clandeboye, an astounding 2,000-acre estate in Northern Ireland.
By James Reginato ( in WMagazine)
Photographs by Simon Watson
February 2009
On a meadow deep within Clandeboye, her magnificent 2,000-acre estate in Northern Ireland, a tempest has just lashed her mass of curly hair and splattered mud about her, but Lindy, the Marchioness of Dufferin and Ava, doesn’t so much as ask for a brush when it’s time to take her portrait. Instead, the sprightly Lady Dufferin frets about her 130 heifers, some of which are also due to be photographed. “I’ve ordered the cows to be washed,” she explains. “Where’s Willow?” she asks a gamekeeper somewhat nervously. “Is she ready?”

Willow, it turns out, is the bovine Miss Universe—Ireland’s Supreme Champion, Cow of the Year, and the undisputed star of the Clandeboye Herd, voted No. 1 in all of the UK in 2007.

Dufferin, 67, has traditionally guarded her privacy and never fully opened her home, or herself, to the press. But cow pride—and perhaps some newfound business savvy—seems to have softened her reserve. “Tears,” she says, when asked of her reaction to the top herd honor. On the heels of this award, she has just launched Clandeboye Estate Yoghurt from the milk of these fine beasts, an artisanal product that the UK’s leading supermarkets, Sainsbury’s and Tesco, vied for the honor of carrying first. When asked which one she was likely to choose, Dufferin confessed to a reporter that she “[hadn’t] a clue,” because she’d never been to a supermarket, prompting the British press to make predictable fun of her. Still, the very p.c. New Statesman admitted that the “hideous unfairness” of the class system had nonetheless produced “some wonderful eccentrics,” namely Dufferin.

Her lack of familiarity with the pantry aside, Dufferin has labored valiantly throughout four decades to keep Clandeboye—one of Ireland’s largest and oldest estates—intact. During the course of her often tumultuous life, the property has served as an anchor and a refuge—a subject she broaches once we escape the inclement weather following Willow’s portrait (a difficult sitting, as the 1,700-pound Holstein, like most beauty queens, proves temperamental).

“I’m not remotely interested in being posh or chic,” announces Dufferin, sitting down to tea and just-baked crumpets in Clandeboye House’s vast library, a richly paneled and gilded room. Yet she then proceeds to rave about Nicky Haslam’s much chronicled ball two nights earlier in London, where she danced until four, primarily with Picasso biographer and old friend John Richardson. According to several stunned observers, the pair flung themselves about with ferocity.

A tall woman who seems constantly energized, Dufferin is a product of Ireland’s fabled Guinness family twice over. Her father, Loel Guinness, a dashing sportsman, came from the so-called banking branch of the clan, and in 1964 she married a distant cousin from the brewing side, Sheridan Hamilton-Temple-Blackwood, the Fifth Marquess of Dufferin and Ava. 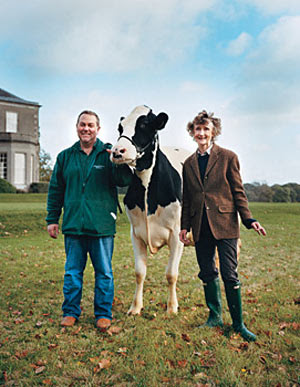 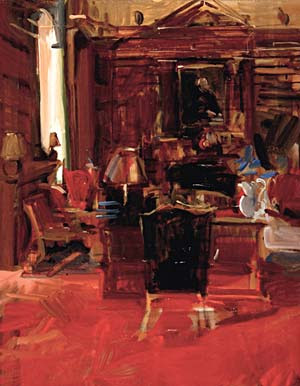 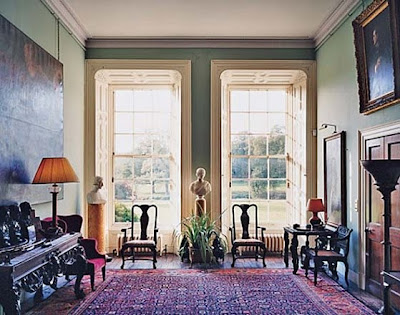 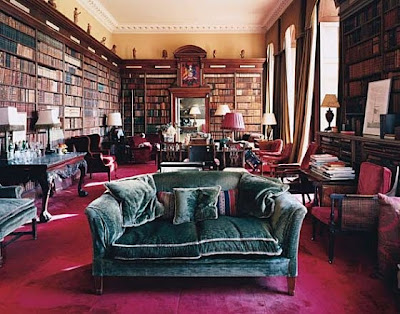 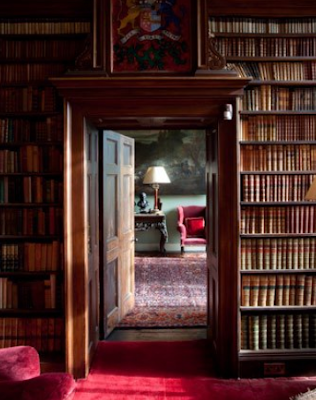 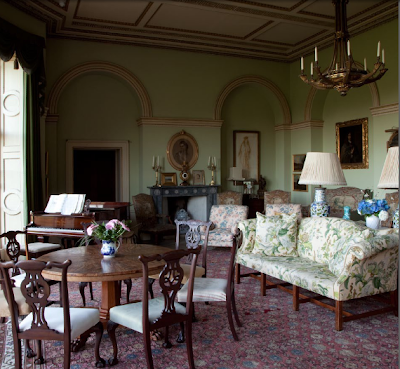 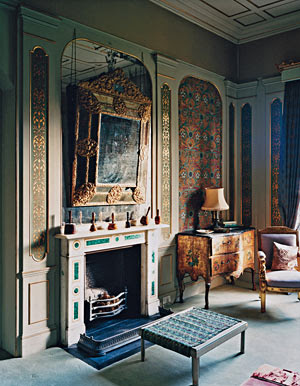 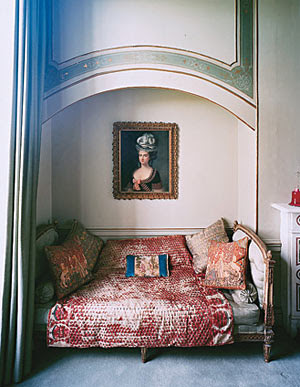 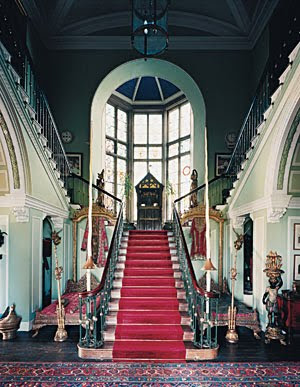 This is very interesting to me because I know that estate from the book 'Great Houses of Ireland' by Sykes/Montgomery-Massingberd, already, where it was one of my favourites, but there those rooms had been photographed from a different angle. I will put them in my BLOG.