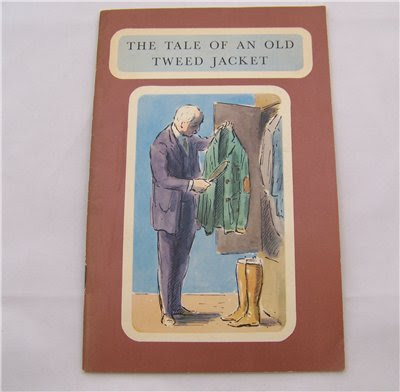 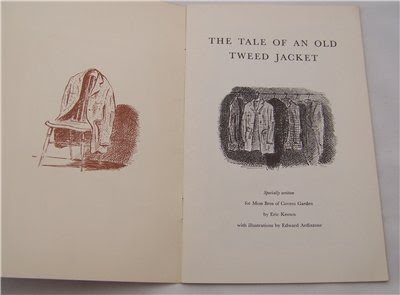 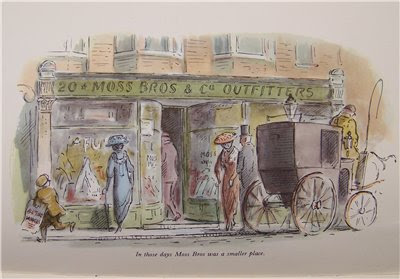 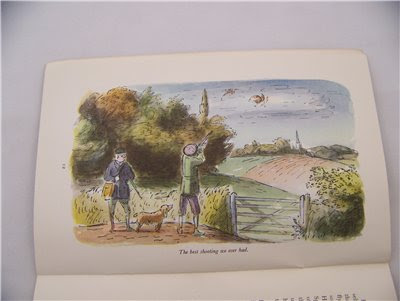 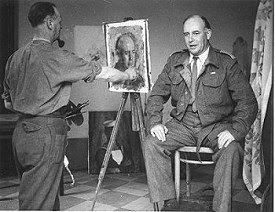 Ardizzone was born at Haiphong, Tonkin, French Indo-China, where his Algerian-born Italian father was on overseas government service. Ardizzone's English mother returned to England with her three eldest children in 1905. The children were brought up in Suffolk, largely by their maternal grandmother, whilst their mother returned to join her husband in the Far East. Ardizzone was educated first at Ipswich School and then at Clayesmore School - where he was encouraged by his art teacher. (see: The Young Ardizzone: an Autobiographical Fragment (London 1970))
He worked as an official war artist in World War II: his early experiences between Arras and Boulogne are illustrated and described in his book Baggage to the Enemy (London 1941). An extensive collection of his war pictures, as well as his wartime diaries, can be seen at The Imperial War Museum.
His best known work is the Tim series, featuring the maritime adventures of the eponymous young hero. The first book, Little Tim and the Brave Sea Captain, was published in 1936. The most famous of the books, Tim All Alone, won the British Library Association's Kate Greenaway Medal for illustration in 1956. The series is often thought to have ended in 1972 with Tim's Last Voyage but that was, in fact, followed in 1977 by Ships Cook Ginger. His Sarah and Simon and No Red Paint was issued in an edition by Doubleday in 1966.
As well as writing and illustrating his own books, Ardizzone also illustrated books written by others, including the novels of Anthony Trollope. His 1939 characterization of H.E. Bates's My Uncle Silas was inimitable. Among his happiest collaborations was that with Eleanor Farjeon, especially The Little Bookroom.
He illustrated the Nurse Matilda series of children's books written by his cousin, author Christianna Brand. Both cousins heard the stories from the same grandmother - who had, in her turn, heard them from her father. He also famously illustrated A Ring of Bells, John Betjeman's abridged version for children of his Summoned by Bells autobiographical poem. He worked on C. Day Lewis's children's novel The Otterbury Incident, as well as some novels by the American author Eleanor Estes, including The Alley, Miranda the Great, Pinky Pye, The Tunnel of Hugsy Goode and The Witch Family.
He is also particularly noted for having not just illustrated the covers and contents of books but inking the title text and author's name in his own hand, giving the books a distinctive look on shelves. An example is Clive King's Stig of the Dump.
Ardizzone illustrated a series of books for young children by Graham Greene including The Little Fire Engine, The Little Horse Bus,The Little Train and The Little Steamroller. He also illustrated a re-telling of the Don Quixote story for children by James Reeves. His illustrations for the The Land of Green Ginger by Noel Langley are classics in their own right.
Ardizzone also illustrated several telegrams for the Post Office in the 1950s and 1960s, many of which are considered collector's items.
His style is naturalistic but subdued, featuring gentle lines and delicate watercolours, but with great attention to particular details.
He was elected to the Royal Academy of Arts in 1970, and appointed CBE in 1971. The British Library published an illustrated bibliography of his works in 2003.
Ardizzone died of a heart attack in 1979. 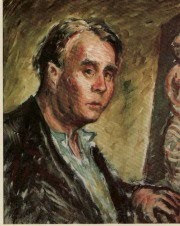 Edward Ardizzone, who was born in Haiphong in 1900, is very much an English artist in spite of his Italian name and partly Italian ancestry. Though an admirer of the drawings of Constantin Guys, one can discern little or no foreign influence in his work, which belongs to the long tradition of illustrators of this country including such names as Cruikshank, Charles Keene and Caldecott. Any artistic family background came from the side of his English mother. She had been a watercolour painter, as were so many young ladies of that period, but she, more than most, had studied in Paris and worked in Colarossi's studio in the 188os. Further back, there was an almost legendary descent from a Joshua Kirby, who was a Suffolk man and an artist friend of Gainsborough.

Ardizzone's artistic education was a part-time training, but it was forceful and enduring. He worked for a number of years at the Westminster Art School - alas, no more – in Bernard Meninsky's evening life classes, coming under the spell of a man who was not only a born teacher and a brilliant draughtsman of the human form but one who could inspire enthusiasm in his pupils and possessed a vast store of knowledge, which he was always ready to impart to those whom he favoured. In 1927 Ardizzone left the City firm where he had been working and decided to take up art as a career.


He celebrated his newly won freedom with a tour abroad. Foreign scenes however left little impression upon him and the first inspiration in Ardizzone's work was the part of London in which he had lived since early manhood, Maida Vale, where raffishness verging almost on the sinister jostled closely against a respectable population with a slightly foreign and artistic flavour. Architecturally it is a district divided by wide avenues flanked with trees, and it could boast then of possessing some of London's most rewarding "locals", whether for the company found in them, both racy and seedy, or for the interior decor. This ranged from thChristmas Eve at the Warrington- Christmas e palatial resplendence of "The Warrington", with its lordly staircase leading to the billiard room above, which figures so frequently in the artist's drawings and paintings, to the cosy frowstiness of little bars tucked away in some quiet back alley. It is these which provide the milieu for so many of Ardizzone's intimate scenes of London life. There, also, were to be found the dingy "bed-sitters" and the sparsely furnished studios, which enshrine so many resplendent female nudes.

But it was not always seamy metropolitan life. There was another vein that can early be found in the artist's work, softer and more idyllic, arising from his frequent descents into the Kentish countryside. First to Eynsford, with its lovely valley which, forty five years ago, was almost as Samuel Palmer knew it, and later to Rodmersham Green near Sittingbourne, with its family connections and where he himself now lives. Its orchards and leafy lanes have constantly inspired him. Illus. from Blackbird and the Lilac - James Reeves 1952
There was yet a third motif which plays a large part in Ardizzone's oeuvre, the sea and shipping. Knowledge and experience of the sea were in his ancestry on both sides of his family. His father's father had been an Italian sea captain, who lived at Bari and was
a ship owner, and one of his mother's grandfathers had been a Captain Kirby, who left behind him a number of logbooks illustrated by himself.

He visited Kingsdown, near Deal, where his brother David had a house beside the shingly beach and where shipping was constantly passing close in-shore. This was to be the inspiration for the first Tim book, Little Tim and the Brave Sea Captain, in which the Ardizzone house was Tim's home. Ships, sail and steam, small boats, incidents of life at sea and activity on rivers were again and again to provide fruitful themes.

Such were the subjects of many of Ardizzone's pictures throughout his working life, but early in his artistic career came an opportunity to widen his outlook that provided material of sterner quality with a totally different background. He was appointed official War Artist in 1940. From the period in France up to the fall of Dunkirk, during the early London blitzes and Britain's preparations against invasion, to North Africa and the Western Desert and then on to Sicily, ltaly, Normandy and Germany he poured out a long succession of drawings and paintings. He depicts the hardships of civilian life with the sudden interruptions of peacetime existence, the soldiers' training, the frequent periods of waiting and inactivity and then the almost uninterrupted fast-moving warfare of the latter years. Ardizzone was never far behind the battle, and at times he can produce a grim picture of recent fighting. The total output provides a wide survey of human behaviour in times of war, which for its truthfulness parallels the writings of literary recorders such as Stendhal and Tolstoy.
After the war, Ardizzone's subject matter again widens. Though for a number of years he was to continue his "low life" subjects, a world of greater respectability begins to appear, with house parties and bathing pools in the South of France. Records of foreign travel present a life of greater comfort and affluence. Beer in pubs gives place to wine at the dining table, the imbibers may still have red noses, but they are tasting finer products, which are not cheap. Some bite may have gone out of his work, but the social scene isnow richly attractive. In 1962 he was elected A.R.A. and in 1970 R.A.

As a constant observer of life around him, Ardizzone was ideally suited for book illustration. In a sense all his work is illustrative, but the power to interpret an author's text is a gift which he possesses in a marked degree, both from his sympathetic understanding and vivid imagination. His achievement in this field lies in his ability to create a series of small events. He does not concentrate as much on the individual characters of the story as make a picture from their behaviour in the incidents which he has selected. Apart from the people in his own children's tales, one lays down the book with perhaps no extended knowledge of the hero or of the other protagonists, but with a memory enriched by a number of lively scenes 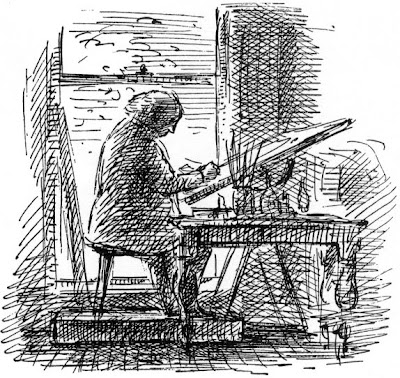 What would Edward Ardizzone have made of the new editions of his Little Tim books as we approach the centenary of his birth? He would have loved them, his daughter, Christianna Clemence, tells Joanna Carey (The Guardian, Tuesday 4 January 2000) 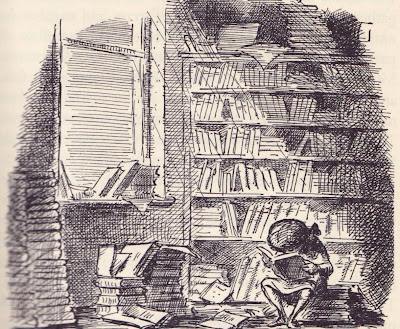 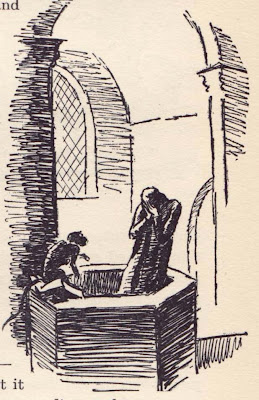 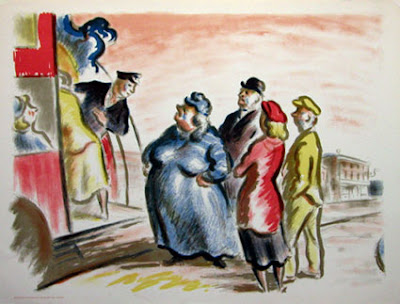 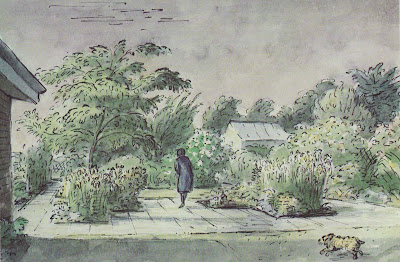 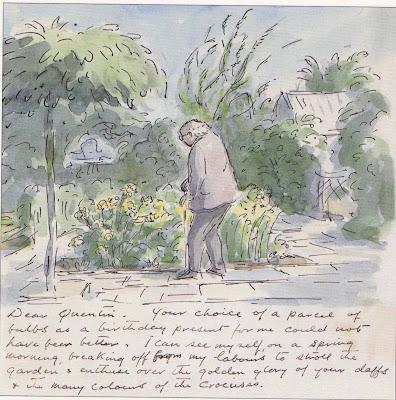 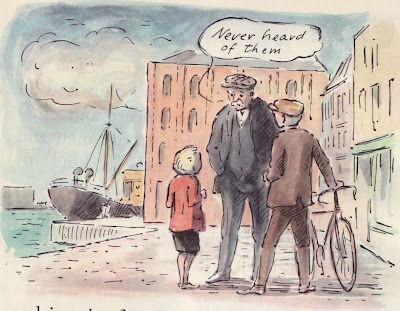 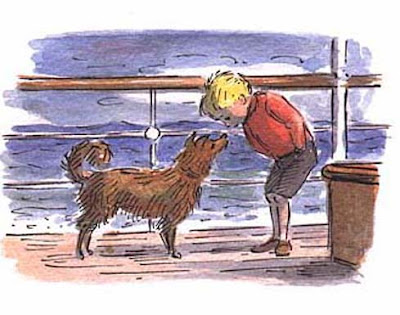 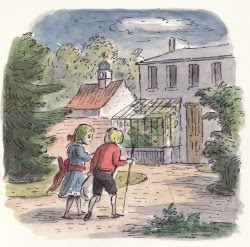 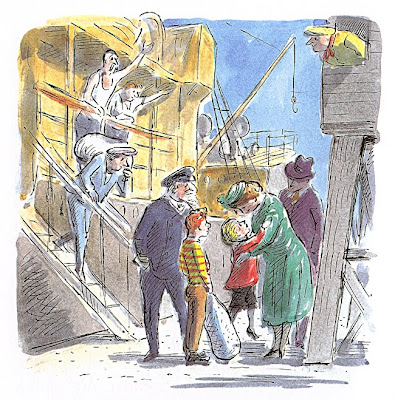 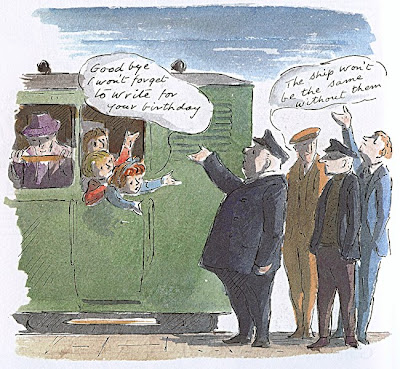