The Escape and Evasion Maps. 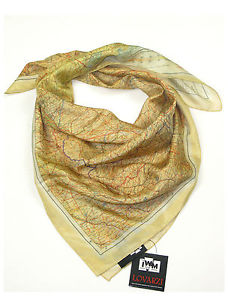 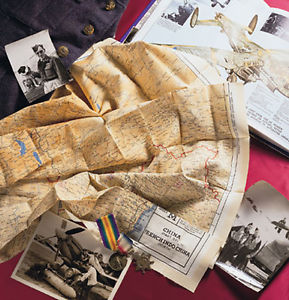 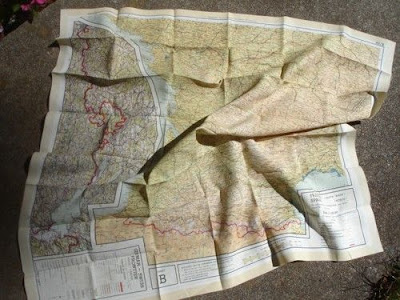 Escape and Evasion Maps, also called silk maps or cloth maps, are maps made for servicemen to be used in case of capture or being caught behind enemy lines. Developed during World War II, these maps were used by many American and British servicemen to escape from behind enemy lines. These maps could be used without a rustle or crackling. They could also be hidden inside cloth uniforms, such as in a seam or inside a collar, that wouldn't betray their existence during a frisking or inspection. The silk maps could also be used to patch clothes, filter water, make a sling for an injured arm or to make a bandage. They could also be used to blow the nose. "The Allies needed to be able to print their clandestine maps on a material that would be hardier than paper -- material that wouldn't tear or dissolve in water and that would be light enough for the user to pack into a boot or cigarette packet at a moment's notice. (Silk maps, which have long been in use among militaries, have the added advantage that they don't make noise as they're being held or stored -- an important attribute, when you're a prisoner in search of escape.)”

The British were the first to use cloth maps during World War II. They produced a rather odd series of burlap maps for the Royal Air Force on canvas backing. Teams of women used colored burlap thread, and created realistic landscapes of the areas of interest. These maps helped familiarize the pilots and navigators with terrain feature when on bombing runs over the continent. A good team could complete a ten foot square of canvas and burlap in about three days.

Most of the American maps supplied by the Army Map Service from World War II were actually printed on rayon acetate materials, and not silk. However, because of the silky texture of the materials, they were referred to by the more familiar textile name.

"When you look at these maps the unusual materials are perhaps the first thing you notice. During WWII hundreds of thousands of maps were produced by the British on thin cloth and tissue paper. The idea was that a serviceman captured or shot down behind enemy lines should have a map to help him find his way to safety if he escaped or, better still, evade capture in the first place. A map like this could be concealed in a small place (a cigarette packet or the hollow heel of a flying boot), did not rustle suspiciously if the captive was searched and, in the case of maps on cloth or mulberry leaf paper, could survive wear and tear and even immersion in water. The scheme was soon extended to cover those who had already been captured, although a certain amount of ingenuity was required to get the maps into the POW camps."

Many of these maps were also used in clandestine wartime activities. Several of these maps, for example, were issued to Oliver Churchill, a member of the Special Operations Executive or SOE, for his activities in Italy.

"After Christopher Hutton got the cartographic source, he needed a medium on to which he could printed the maps, such that they were quiet to unfold, would not disintegrate when wet, and maintained their integrity when folded at the crease line and could be concealed in very small places. After many attempts to print on silk squares, he was about to give up. Then he thought of adding Pectin, a form of wax, to the ink such that it does not run or wash out when put in water, or even sea water. Clayton Hutton printed escape maps on silk, man-made fiber and tissue paper. The tissue paper was very special, in that it was not made from wood pulp like conventional paper, but from Mulberry leaves. This hybrid paper had the texture of onionskin and extreme durability. You could ball of this tissue paper, put it in water and soak it, and then flatten it out without creases. All the integrity of a new map was there, no data faded or disintegrated and you could fold it up in such a fashion that it would occupy a very small space, such as inside a chess piece or inside a record."

There were many difficulties in printing maps on cloth that are not present with printing on paper. Also, the inks used had to be permanent to sun, water, chemicals, etc., so they wouldn't fade and make the map useless. The finished products were able to withstand immersion in salt water for extended periods as well, and were mildew resistant.

Printing on paper was well known, but printing on cloth had special problems. The ink would run on the cloth, or the cloth would crease during the preparation or printing process, or the ink would smear. However, many board game companies were used to printing on linen and other cloth materials, which would then be glued to cardboard portfolios for their game sets. So the government turned to them for help.

The cloth maps were sometimes hidden in special editions of the Monopoly board game sets sent to the prisoners of war camps. The marked game sets also included foreign currency (French and German, for example), compasses and other items needed for escaping Allied prisoners of war. "To develop that kit, MI9, the British secret service unit responsible for escape and evasion, conspired with John Waddington Limited, the U.K. manufacturer of Monopoly. "It was ingenious," Philip Orbanes, author of several books on Monopoly, told Heussner. "The Monopoly box was big enough to not only hold the game but hide everything else they needed to get to POWs."

Hutton was also responsible for the delivery of escape kits to POWs. The Geneva Convention allowed prisoners to receive parcels from families and relief organisations. These were dispatched through a number of fictitious charitable organisations, created to send parcels of games, warm clothing and other small comforts to the prisoners. One of the major problems of captivity was boredom, and games and entertainments were permitted, as the guards recognised that if the prisoners were allowed some diversions, they would be less troublesome. Games manufacturer Waddingtons helped by supplying editions of its Monopoly board game, and other games. Although to date, no examples of any such monopoly boards have surfaced, it is therefore doubtful if the operation to use monopoly as part of escaping tool for POW escapees ever took place. No samples were kept for record purposes in either Waddington or the War office archives and the pictures of such boards currently available are all modern reproductions. Snakes and ladders, table tennis, chess sets and playing cards were used to smuggle in escape kits with hidden maps and other equipment.

Escape maps were also printed on playing cards distributed to Prisoners of War. Only two decks are known to survive from this period. "During World War II, the United States Playing Card Company joined forces with American and British intelligence agencies to create a very special deck of cards. This deck was specifically created to help Allied prisoners of war escape from German POW camps. This deck of cards became known as the “map deck.” It was made by hiding maps of top-secret escape routes between the two paper layers that make up all modern playing cards. These decks, when soaked in water, could be peeled apart to reveal hidden maps that allowed escaping prisoners to find their way to safety. Due to the nature of the war and the prosecution of war crimes thereafter, the map decks remained a closely guarded secret for many years after the war ended. The secrecy surrounding them was so high, that no one really knows how many were produced or how many have survived."

Red Cross parcels were not used because of concerns the Germans would stop these reaching the prisoners if they discovered items hidden in them. The escape kits are credited with helping 316 escape attempts from Colditz Castle, which saw 32 men make it back home. 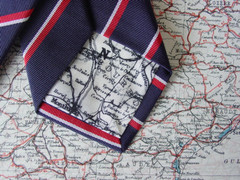 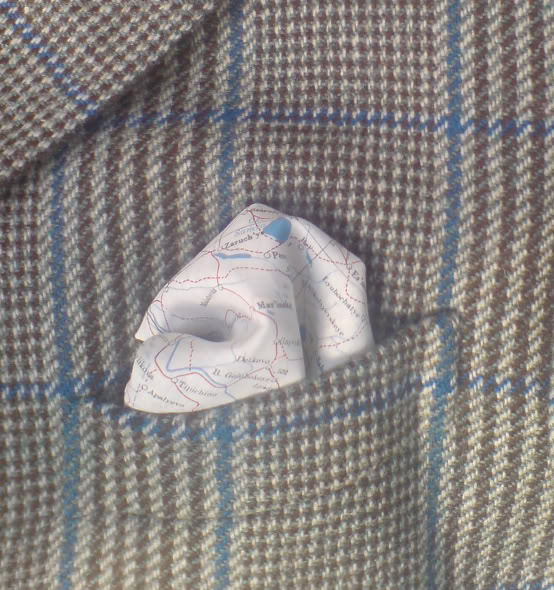 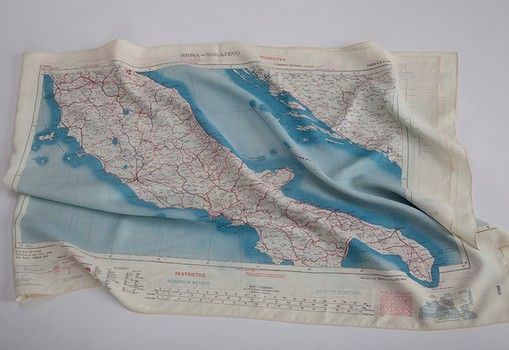 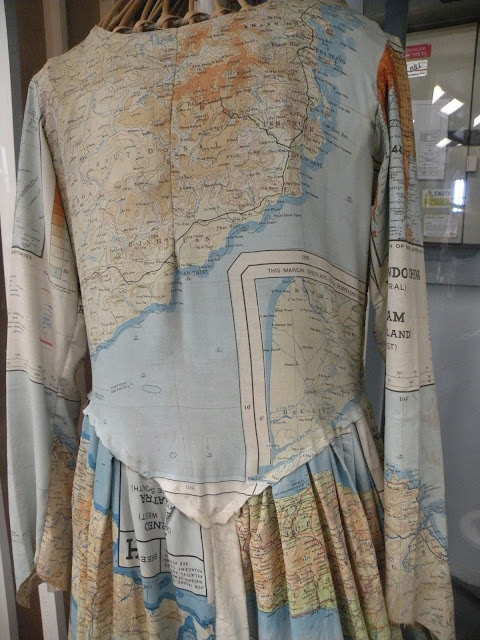 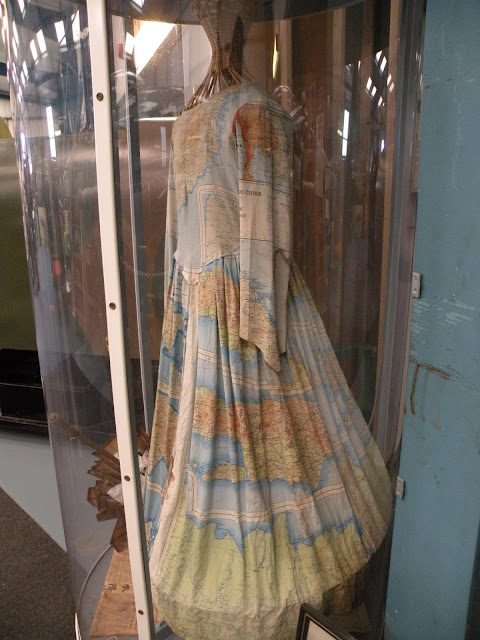