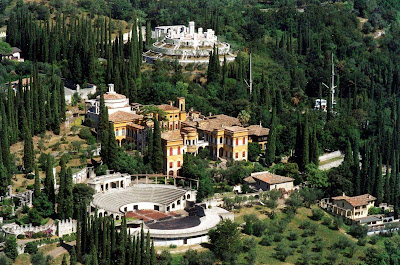 The Vittoriale degli italiani (The shrine of Italian victories) is a hillside estate in the town of Gardone Riviera overlooking the Garda lake in province of Brescia, Lombardy. It is where the Italian writer Gabriele d'Annunzio lived after his defenestration in 1922 until his death in 1938. The estate consists of the residence of d'Annunzio called the Prioria (priory), an amphitheatre, the protected cruiser Puglia set into a hillside, a boathouse containing the MAS vessel used by D'Annunzio in 1918 and a circular mausoleum. Its grounds are now part of the Grandi Giardini Italiani.


References to the Vittoriale range from a “monumental citadel” to a “fascist lunapark”, the site inevitably inheriting the controversy surrounding its creator.

The house, Villa Cargnacco, had belonged to the German art historian of the Italian Renaissance Henry Thode from whom it was confiscated by the Italian state, including artworks, a collection of books, and a piano which had belonged to Liszt. d'Annunzio rented it in February 1921 and within a year reconstruction started under the guidance of architect Giancarlo Maroni. Due to d'Annunzio's popularity and his disagreement with the fascist government on several issues, such as the alliance with Nazi Germany, the fascists did what they could to please d'Annunzio in order to keep him away from political life in Rome. Part of their strategy was to make huge funds available to expand the property, to construct and/or modify buildings, and to create the impressive art and literature collection. In 1924 the airplane that d'Annunzio used for his pamphleteering run over Vienna during World War I was brought to the estate, followed in 1925 by the MAS naval vessel used by him to taunt the Austrians in 1918 in the Beffa di Buccari. In the same year the protected cruiser Puglia was hauled up the hill and placed in the woods behind the house, and the property was expanded by acquisition of surrounding lands and buildings.

In 1926 the government donated an amount of 10 million lire, which allowed a considerable enlargement of the Villa, with a new wing named the Schifamondo. In 1931 construction was started on the Parlaggio, the name for the amphitheatre. The mausoleum was designed after d'Annunzio's death but not actually built until 1955, and d'Annunzio's remains were finally brought there in 1963.

The Prioria
The Prioria itself consists of a number of rooms opulently decorated and filled with memorabilia. Notable are the two waiting rooms, one for welcome guests, one for unwelcome ones. It is the latter where Benito Mussolini was sent to on his visit in 1925. A phrase was inscribed specifically for him above the mirror:

To the visitor:
Are you bringing Narcissus' Mirror?
This is leaded glass, my mask maker.
Adjust your mask to your face,
But mind that you are glass against steel.

The leper's room is where D'Annunzio's wake was held upon his death. Its name comes from the fact that d'Annunzio felt that he was being spurned by the government due to their continued efforts to keep him in Gardone, rather than possibly in the limelight in Rome.

The Relic room holds a large collection of religious statues and images of different beliefs, purposely placed together to make a statement about the universal character of spirituality. The inscription on the inner wall reads:

As there are five fingers on a hand, there are only five mortal sins.
D'Annunzio wished to make clear hereby that he didn't believe that lust and greed should be considered sinful.

A most unlikely relic is the distorted stering wheel of racing speedboat Miss England II, donated after the coppa dell oltranza (unlimited cup) powerboating trophy, organized under d' Annunzio patronage, was held in 1931. Miss England II had crashed in a world speed record attempt, killing her pilot, Sir Henry Seagrave in 1930 (though winning the record nevertheless) and was rebuilt to race and win at Lake Garda the following year with Kaye Don at the helm.

D'annunzio who was a syncretist (believer in all religions) deemed the distorted steering wheel "a relic of the religion of courage".

The Amphitheatre.
The amphitheatre is the first major structure one comes across after entering the estate and was clearly based upon classic models, the architect Maroni even visiting Pompeii for inspiration. Its location, like the other buildings of the Vittoriale undeniably offers a majestic view of the Garda lake, it is still used for performances today.

The Mausoleum
The circular structure is situated on the highest point on the estate. It contains the remains of men who served D'Annunzio and died during the Fiume incident, and d'Annunzio himself.

The Protected cruiser Puglia
Jutting out of one of the hilltops the cruiser Puglia makes a surreal sight. It was placed there, with its bow pointing in the direction of the Adriatic, “ready to conquer the Dalmatian shores”. 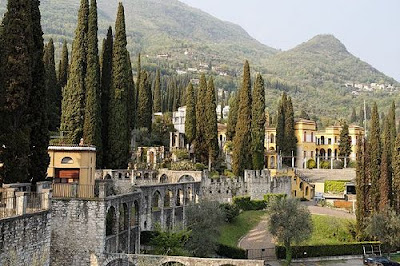 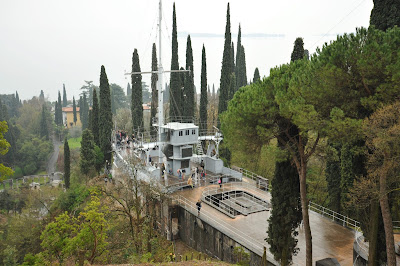 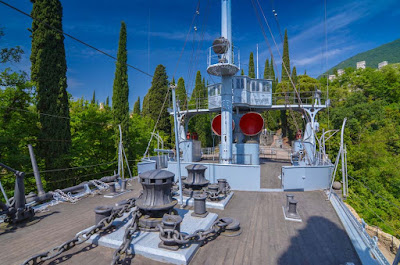 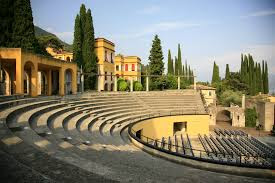 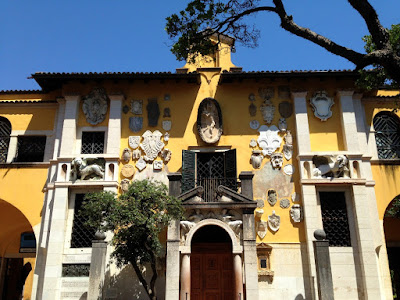 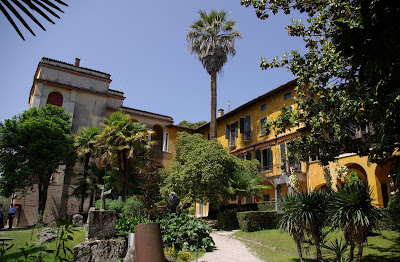 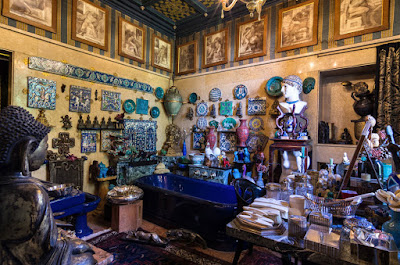 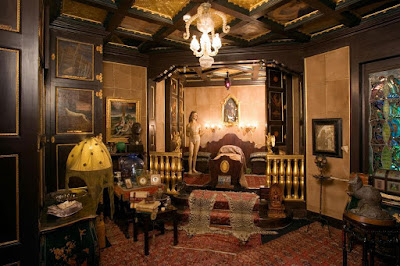 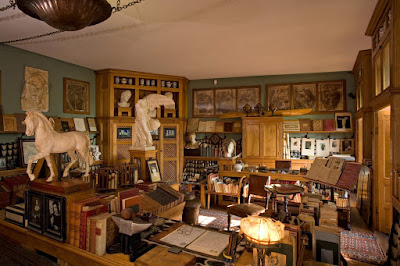 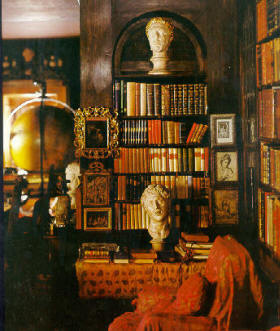 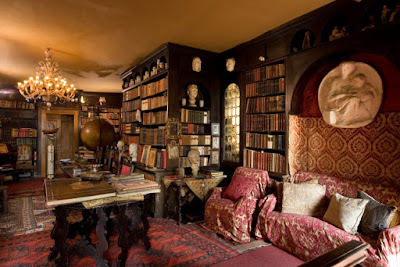 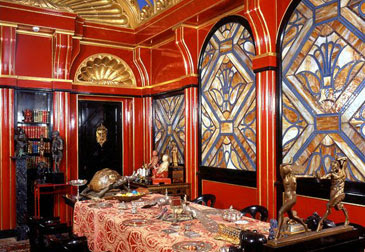 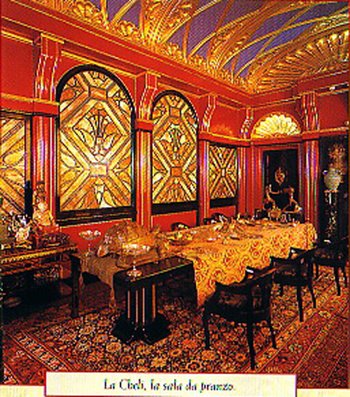 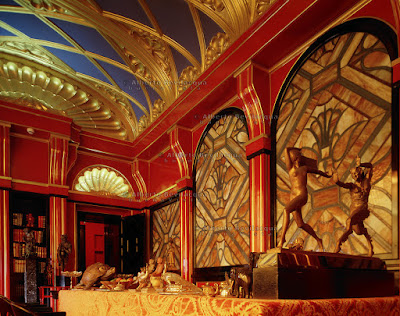 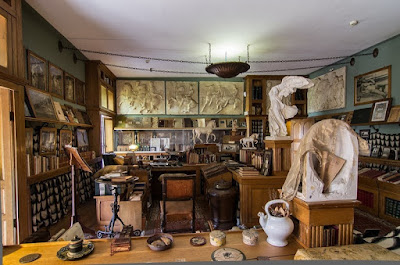 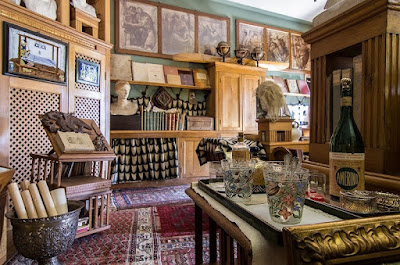 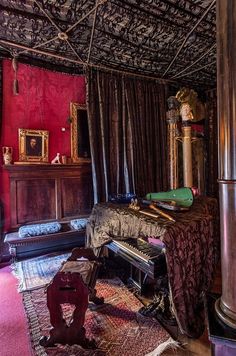 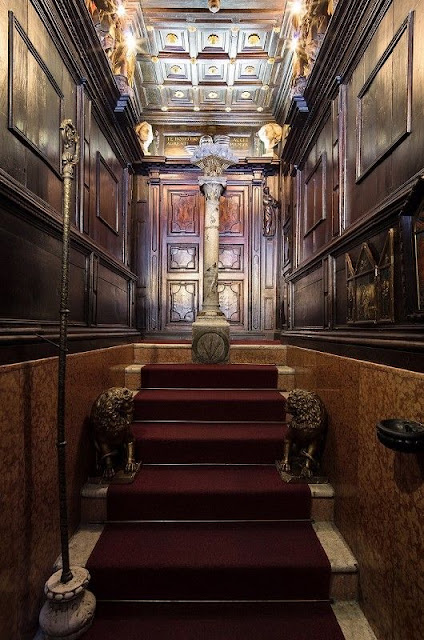 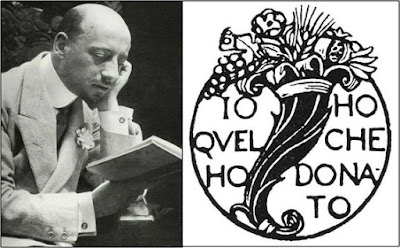