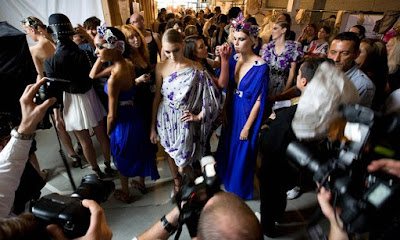 Mistreatment of models is fashion’s Groundhog Day
Rather than thinking of models as skinny mean girls, we should recognise how badly they are treated within their own industry

I have been reading a lot recently about how models are treated really badly. I thought this had been sorted out ages ago.

Yes, mysterious, isn’t it? Rather like how we sorted out that fashion magazines were no longer going to feature skinny models. And yet here we are again, with models complaining about how horrendously they are treated, and magazines not exactly lacking in visible hip bones. Huh. It’s almost like the fashion industry … just doesn’t care?

Let’s unravel this story one grim revelation at a time. In a long post on Instagram last month, the respected fashion show casting director James Scully wrote about specific instances of the fashion industry being, for want of a better phrase, a massive dick. Along with the usual depressing stories of racism, with one label allegedly refusing to audition any models of colour for their show (they responded saying the claim was “completely untrue”), Scully called out Balenciaga’s casting directors, Maida Gregori Boina and Rami Fernandes, whom he described as “serial abusers”. Boina and Fernandes, Scully wrote, left 150 models in a dark stairwell for hours at a time, leaving many “traumatised.”

Boina and Fernandes have firmly denied these claims, although models Judith Schiltz and Mollie Gondi posted comments on Scully’s post verifying some of his accusations. Balenciaga has said that they are no longer working with Boina and Fernandes and apologised to modelling agencies, but Gondi wrote, “The apology to the agencies from the fashion house is laughable because the agents have known this for years and don’t think twice because they want their girl in the show.”

Meanwhile, in Australia, a news programme screened last week in which one model, Victoire Dauxerre, was asked if she thought a woman could be a successful model without having an eating disorder. “No,” she replied.

“I felt like I needed to shave a bone off. I didn’t know how to get smaller,” another model, Edyn Mackney, said. “It is like the only ideal of beauty today is to be skinny”.

Let’s deal with the skinny stuff first, again, because fashion is basically just Groundhog Day, with the same trends and issues coming round and round and round, driving a lady to do a lot worse than throw a radio playing Sonny and Cher at the wall. It’s not “like the only ideal of beauty today is skinny” – that is literally the only ideal of beauty, and it doesn’t matter how many times Karlie Kloss poses with her kookies (geddit?!?!?) in front of her thigh gap, or how many condescending articles fashion magazines run with plus-size model Ashley Graham (she’s not skinny – but we accept her! Like a weird pet!).

Emma Thompson reiterated this point last week when she said, “Actresses who are into their 30s simply don’t eat.” Some newspapers said Thompson “revealed” this insight into Hollywood, but the only people who could have found this to be a revelation had to be as blinkered as Aaron Sorkin, who recently professed himself to be amazed “that women and minorities have a more difficult time getting their stuff read than white men”. The man might be able to walk and talk but apparently not look and think.

Thin is in, and that is not changing. And extreme thinness is still equated with the ultimate aspiration in too many people’s minds, especially in the fashion industry. The only thing we, the public, can do about it is not to buy from labels that use extremely skinny models in their adverts and shows, and write to them to tell them this. Fashion labels can ignore well-intended if woolly edicts from politicians and even fashion magazine editors. But they never overlook a missed sale.

As to the actual abuse of models, stories of high-end models demanding tens of thousands to get out of bed, or throwing their jewelled mobile phones into the brains of cowering minions, have given the public the idea that models are all pampered divas. But news that 99% of models are treated like expendable dairy cattle will come as no surprise to anyone who has ever been on a fashion shoot or to a show. As one young woman put it in a recent survey about how models are treated, “We have a job that millions of girls would kill for, so we should be happy with what we’re doing, even if it has a dark and sadistic side to it.” That pretty much sums it up, and it’s an attitude many other young people working in similarly much-desired professions – pop music, acting, even certain kinds of journalism – will recognise.

It’s pretty telling how little people talk about the abuse models have repeatedly said they suffer, focusing instead all their outrage on how models make them feel. And the reason for that is pretty obvious: people see models as mean girls, deliberately making us sadface with their skinniness, as opposed to thinking about what goes into making these images. When stories like Scully’s come out, people say, “Well, why don’t these models just get different jobs?”, as though modelling were a lighthearted hobby for silly little girls and jobs grew on trees for young women. That models are treated so badly by the industry is an indictment of fashion; that the public is so uninterested in these stories is damning proof that most people are as bad as the fashion industry at failing to see models for what they are: vulnerable young women.