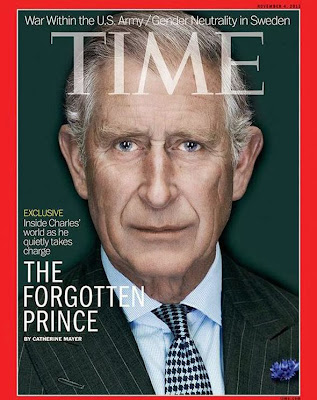 A report in Time magazine quoted an unnamed official saying how Prince Charles is worried he will not achieve ambitions linked to his interests before "the prison shades" close.

Time spoke to 50 of the prince's friends and associates for the article.

It is not known whether the widely reported comment was made by a current or former member of royal staff.

A Clarence House spokesman said: "This is not the Prince of Wales's view and should not be attributed to him as he did not say these words.

"The prince has dutifully supported the Queen all his life and his official duties and charitable work have always run in parallel."

Lack of time'
Catherine Mayer, who wrote the article for Time magazine, told BBC Radio 4's Today programme that "part of a quote" had been "taken out of context" by other news organisations.

"The thing that I find funny about that is, of course, one of the reasons I wanted to profile the prince is that I thought there was an extraordinary gap between who he was and what he did and how he was portrayed... in the British press.

"So, to see some of what I hoped was sort of balanced and carefully calibrated somewhat sexed up doesn't surprise me at all."

She said the term "prison shades" referred to concern among the prince's household that now the prince was taking on more of the Queen's duties "there's a big impact on what the Prince of Wales actually does already, in terms of time, so the reference was to his dwindling lack of time".

She added: "He is absolutely not saying he doesn't want to be king and nobody in his household is saying that."

For decades, as heir to the throne, the Prince of Wales has founded charities and spoken out on many issues.

In the coming years, he will have to do more of his mother's work as she, now 87, does less. Next month, he will represent the Queen at a Commonwealth heads of government meeting in Sri Lanka.

Catherine Mayer
Journalist
The Time profile said the prince took on extra royal duties "joylessly" and, far from "itching to assume the crown", he was already feeling its weight and worrying about its impact on his current role.

Prince Charles, who does not comment on his accession, was quoted as saying he had always had this "extraordinary feeling" of "wanting to heal and make things better".

Ms Mayer told Today that "the public image of him as a man who has sat there sort of cantankerously waiting for his mother to pop off so he can become king is about as far from the truth as it's possible to imagine".

In the article, Ms Mayer said the prince sat down with the magazine "to discuss his hopes - and profound concerns - for the future".

'Activist monarch'
But anti-monarchy campaigners dismissed his comments as "self-obsessed and self-pitying".

Graham Smith, chief executive of the Republic pressure group called on the prince to "renounce his claim to the throne", adding: "If Charles wants to get involved in politics, he should do so on the same terms as everyone else."

He claimed the prince's contribution to the article was designed to prepare the British public for a more "activist monarch".

Prince Charles has been criticised for writing to and meeting government ministers in secret to give his opinion on various policy matters.

The interview was published as official photographs for the christening of Prince George were released.

Prince Charles is featured as the cover story in this week's issue of Time magazine as "The forgotten prince".

The magazine's editor-at-large, Catherine Mayer, was given exclusive access to the prince, visiting his homes in England, Scotland and Wales.

She was also able to interview more than 50 of Charles's friends and associates.

According to her article, the perception that the Prince of Wales is an unhappy man champing at the bit to become king does not match the reality.

Instead, Mayer says he is gloomily aware that as soon as he does ascend the throne he will have to leave behind many of the charities and projects he has spent his life creating and nurturing.

Mayer reveals that, with the Queen slowing down, Charles has had to accept additional royal duties, but has done so "joylessly."

Her piece also contends that the image of an aloof, spoiled and distant man is wrong. He is a passionate philanthropist, magnetic in his personal interactions and deeply committed to making the most of the privileges granted to him due to his inherited position.

Prince Charles is quoted in the article as saying:

"I've had this extraordinary feeling, for years and years, ever since I can remember really, of wanting to heal and make things better…

I feel more than anything else it's my duty to worry about everybody and their lives in this country, to try to find a way of improving things if I possibly can."

Though the prince's popularity is questionable, Mayer sees him as "sheltered by his position and exposed by it." She writes that he "appears a mass of contradictions, engaged yet aloof, indulged and deprived, a radical at the pinnacle of Britain's sclerotic establishment, surrounded by people but often profoundly alone."

Even so, he has many friends and people who meet him like him. For example, Mayer quotes the actress Emma Thompson as saying: "Dancing with Charles, an old friend, is "better than sex."

Thompson adds: "There's a long history of relationships between Princes of Wales and actors—not just actresses, not just the rude relationships as [Charles] would say, though god knows I've tried. He wasn't having any of it."

There are a couple of other other nuggets, such as Charles teaching Prince William how to master knighting people without inflicting injury.

The article also touches on the strategy adopted by the prince to deal with newspaper gossip and allegations. His advisers "concluded years ago that there was little point in seeking to correct any but the most damaging calumnies."

For example, there was no comment on a Daily Mail claim in 2011 that Charles and Camilla, who married in 2005, were living "separate lives."

Mayer's article appears in both Time's US and international editions. The cover portrait was shot for Time by the photographer Nadav Kander.