The English Gentleman: Images and Ideals in Literature and Society by David Castronovo 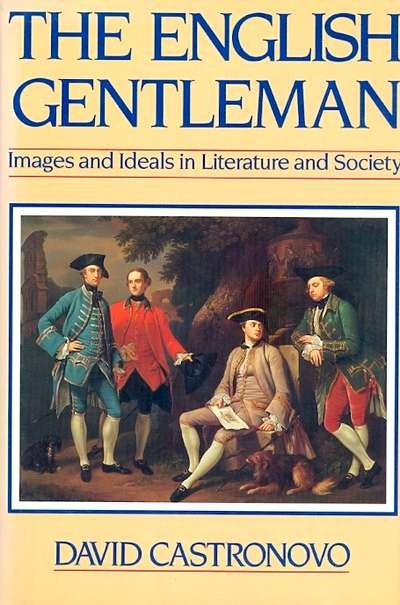 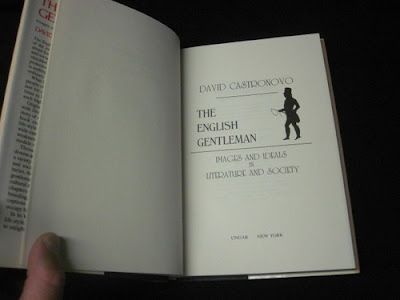 the Englsih Gentleman is an exotic survivor of the modern world who has much to tell about the conduct of life, and about customs and social conditions that have not altogether vanished. With his ancestor worship, self-protective habits, rituals, and prohibitions, he is nothing so much as a member of an extraordinary tribe. What is a gentleman? Is the status term that people often use vaguely in any way important for contemporary life? Why do we continue to hold the image of the gentleman in such a high esteem? Originating in Dr. Castronovo's fascination with Dickens's Great Expectations and his story of a young boy's social ambitions, this book explores one of the key ideals and life-styles of our cultural heritage. It offers a wide-ranging exploration of the value- and weakness - of one of civilization's recurring models of excellence, Through consideration of novelists as diverse as Thackeray and D.H. Lawrence, and a variety of essayist, poets, courtesy writers, and social commentators through the centuries, the multifaceted image of the English gentleman is examined and appreciated as a cultural artifact. The gentlemean is typified in chapters that deal with birth, wealth, honor, breeding, religion, and education, Ideal conceptions of how the gentleman is meant to occupy his time are also fruitfully explored. In its keen and lively illumination of this life-style. The English Gentleman is certain to enlighten today's reader. David Castronovo holds a doctorrate from Columbia University and has written widely on literary criticism and modern literature and thought. His 1985 volume, Edmund Wilson, was a New york Times Notable Book. A new study, Thornton Wilder, reevaluetes the writer in the context of the modernist tradition. Dr. Castronovo is associate professor of English at Pace University, New York. .
https://www.amazon.com/English-Gentleman-Images-Literature-Society/dp/0804421056

DAVID CASTRONOVO
Obituary
CASTRONOVO--Professor David A., 65, of Manhattan died suddenly on November 19. The C. Richard Pace Professor at Pace University in New York City where he taught English literature and composition for more than 30 years, David was the author of a dozen books on literary subjects, including Blokes: The Bad Boys of British Literature (2009). His first book, Edmund Wilson, was named a New York Times Notable Book in 1985. The week he died his review of Christopher Hitchens' memoir Hitch-22 appeared in Commonweal and was billed on its cover. David attended Brooklyn College and received his Masters and Ph.D. in English from Columbia University. A specialist in Victorian studies, he wrote his dissertation on the English gentleman, a subject that he expanded upon and turned into a book in 1987. He is survived by his sister Val, his brother-in-law Alan Waxman, his niece Olivia, and a legion of friends, many of whom he mentored. David's kindness, erudition and rapier wit will be greatly missed. A funeral mass will be held Wednesday at 11:30am at St. Ignatius Loyola Church at 84th and Park Avenue. Please consider donations in David's memory to the English Department at Pace University or Columbia University's Graduate School of Arts & Sciences.