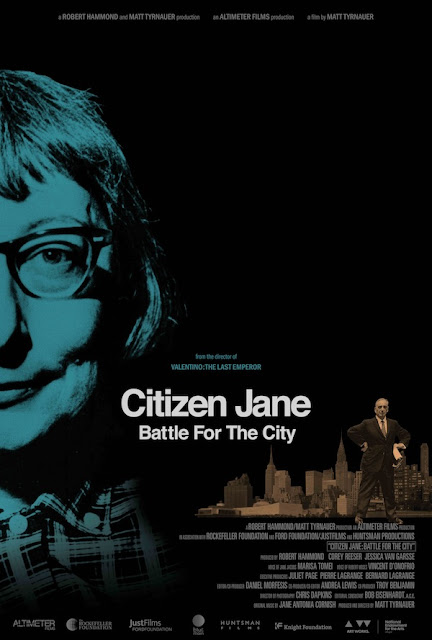 In 1960 Jane Jacobs’s book The Death and Life of Great American Cities sent shockwaves through the architecture and planning worlds, with its exploration of the consequences of modern planners’ and architects’ reconfiguration of cities. Jacobs was also an activist, who was involved in many fights in mid-century New York, to stop “master builder” Robert Moses from running roughshod over the city. This film retraces the battles for the city as personified by Jacobs and Moses, as urbanization moves to the very front of the global agenda. Many of the clues for formulating solutions to the dizzying array of urban issues can be found in Jacobs’s prescient text, and a close second look at her thinking and writing about cities is very much in order. This film sets out to examine the city of today though the lens of one of its greatest champions. 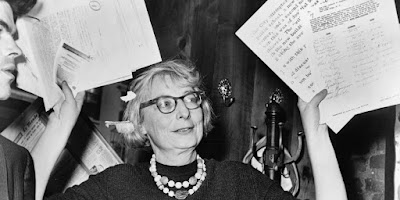 How one woman harnessed people power to ‘save’ old New York

New film tells story of Jane Jacobs’s battles against the wealthiest developers in the city
Jane Jacobs ‘wrote the manual on social activism’.

She was a beaky, bespectacled architecture writer, hardly a figure likely to ignite protests that changed the shape of one of the world’s great cities. Yet such is the legend of Jane Jacobs and her bitter struggles to preserve the heart of New York from modernisation that a film charting her astonishing victories over some of the most powerful developers in the US is set to inspire a new generation of urban activists around the world.

Citizen Jane: Battle for the City tells the story of Jacobs, author of The Death and Life of Great American Cities, who made herself the bane of New York’s powerful city planners from the 1950s to 1970s. Her nemesis was Robert Moses, the city’s powerful master builder and advocate of urban renewal, or wholesale neighbourhood clearance – what author James Baldwin termed “negro removal”.

Moses dismissed the protesters as “a bunch of mothers”, and attempted to ignore their efforts to attract wider attention, which included taping white crosses across their glasses in the style of Jacobs.

But through a combination of grassroots activism, fundraising and persistence, Jacobs blocked Moses and successive city overlords from running Fifth Avenue through the historic Washington Square, tearing down much of SoHo and Little Italy to make way for a billion-dollar expressway, and building a six-lane highway up Manhattan’s west side.

“Some issues you fight with lawsuits and buy time that way,” she later wrote. “With others, you buy time by throwing other kinds of monkey wrenches in. You have to buy time in all these fights. The lawsuit is the more expensive way.”

Jacobs warned of the dangers of mixing big business and government, and called them “monstrous hybrids”. She warned, too, that huge housing projects favoured by developers from the school of Le Corbusier would only bring social dislocation to the poor while making developers wealthy.

Jacobs’s method of prevarication, says Citizen Jane director Matt Tyrnauer, wrote the manual for activism. “Speaking truth to power was her great strength, and she was fearless, but she was also a great strategist and analysed how to get to politicians and threaten them in ways that were going to be effective.”

Robert Hammond, who produced Citizen Jane and co-founded the High Line, a significant renewal project along Manhattan’s west side that turned an elevated rail track into a garden and walkway, says key to her protest was targeting lower-tier elected officials “because they depend on you for their jobs and they know it. She understood that fighting government is a slog, and no matter how powerful you think people are, things can be changed … the value of individuals coming together and working as an organism, which today we call crowdsourcing.”

Those lessons, in particular Jacobs’s later studies of economics, helped shape The Indivisible Project, an umbrella organisation for thousands of protest groups that have sprung up in the US in the aftermath of the presidential election.

Jacobs, who died in 2006 and whose centennial falls this year, used to tell an anti-authoritarian story about a preacher who warns children: “In hell, there will be wailing and weeping and gnashing of teeth.”

“What if you don’t have teeth?” one of the children asks.

“Then teeth will be provided.”

“That’s it – the spirit of the designed city: teeth will be provided for you,” she told the New Yorker in 2004.

In Citizen Jane, the documentarians seek to apply the lessons of Manhattan in the 50s to the urbanisation of China and India. The results are inconclusive.

Many of the challenges cities now face, at least in the west, are reversals of the clearances that affected cities in the last century. “The suburbs are where the poor people are moved to, and they’re becoming more impractical than cities to live in,” says Hammond. 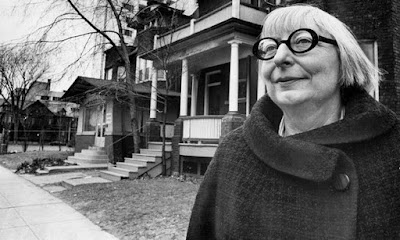 A fascinating documentary captures the showdown, half a century ago, between the activist Jane Jacobs and the Trumpian urban planner Robert Moses: a fight for the future of New York.

“Citizen Jane: Battle for the City,” directed by the gifted journalist and documentarian Matt Tyrnauer (“Valentino: The Last Emperor”), tells the story of a David-and-Goliath fight over urban planning that took place more than 50 years ago. Yet the movie just about pulses with contemporary resonance. It has moments of uncanny overlap with this week’s election, and it explores the scope and meaning of that overly familiar thing — the city — in ways that will box open your thinking. It’s a finely woven tapestry that feels as relevant and alive as the place you live.

It’s also got great sparks of conflict. The movie, which kicked off the seventh DOC NYC film festival last night, features two nearly mythological antagonists. In one corner is Robert Moses, the scabrous New York power broker and construction czar who, in the years after World War II, transformed the city by gutting its poorer sections and erecting miles of concrete-slab housing projects and snaking superhighways. In the other corner is Jane Jacobs, activist and author of “The Death and Life of Great American Cities” (1961), who led an uprising against Moses’ dehumanized dream of a paved-over utopia. She fought his plans to destroy Washington Square Park, to bulldoze the beautiful historic buildings of Greenwich Village, and to bisect lower Manhattan with an expressway that would likely have been the most ruinous — and influential — disaster of urban “renewal” in the history of the United States.

It’s no trick figuring out who to root for, but the fascination of “Citizen Jane” isn’t just in seeing how Jacobs took on the system and won. The movie invites you to sink into her challengingly supple and vibrant analysis of why cities, which we mostly take for granted, are in fact rather magical places. Even if you live in one and think you know it inside out, you come away from “Citizen Jane” understanding, more than you did going in, the special chemistry of what makes a city tick.

It comes from the ground up — and that’s the tricky thing to see, since urban planning generally occurs from the top down. Moses started out in the ’30s as a progressive thinker, but his idea of what it would take to make cities better evolved into a Teutonic, machine-age vision of monolithic apartment buildings in massively organized rows and “clean” streetscapes erected in place of all the neighborhood hurly-burly. We see Moses in clips from the ’40s and ’50s, a blustery, dour-looking man whose eyes gleam with reptilian cunning, and each time he talks about making things better, he expresses such high-handed contempt for those who’ll be displaced that he sounds like he’s talking about roaches. His “philosophy” walks a thin line between improvement and incineration.

Jane Jacobs rejects all of this, but not just on basic common moral human grounds. At heart, she’s an anthropologist, and her subject is the mysterious spirituality of neighborhoods: the way they evolve, over generations, into thriving organic places that are nurturing and protective and are embedded with stories that rise out of the streets. Jacobs makes the point that true neighborhoods, with clusters of small businesses and people sitting on stoops, are far safer than the stark moonscapes proposed by Moses — there are more people around, so the streets are more naturally patrolled. (Sure enough, once housing projects started to get built, they turned out to be far more dangerous places.) More than just “blocks,” they’re human networks, enveloping hives.

This is only Tyrnauer’s second feature, but he has taken a subject that might have been dryly academic and turned it into a visual hymn to the streets of New York — to how their development, over the 20th century, influenced everything around them. Tyrnauer interpolates clips from the ’20s, ’30s, ’40s, ’50s, and ’60s, to the point that the past starts to feel like a living thing. New York was built, but more than that it metastasized, so when Moses treated low-income sections of it as a “cancer” that had to be cut out (he would happily have razed Harlem), he was violating the city’s essence.

Jacobs’ first fight with him is over his attempt to extend Fifth Avenue through the center of Washington Square Park. Sure, it’s just one park, but ask anyone in London or Paris — or the stroller-wheeling mothers of Greenwich Village — how serenely uplifting a park can be. What Moses really wanted to do was take a gathering place and put a spike through it. Jacobs, who at this point was an unknown journalist thought of by her foes as a “housewife,” wrote letters, went to meetings, formed and led a coalition, and in the end shot the plan down.

With her long thin nose, graying hair, and elfin grin, Jacobs bears a striking resemblance to the film critic Pauline Kael (with a hint of a female Poindexter), and she’s got some of Kael’s playful imperiousness. Born in 1916, she’s a bohemian scamp who starts off writing about the city for places like Vogue. By the time she reaches her forties, she has evolved into an activist, but in the least self-righteous way possible; she wants to preserve her home. In the duel between herself and Moses, gender is far from incidental, and not just because Jacobs emerged out of the same second-wave-feminist era defined by writers like Betty Friedan (“The Feminine Mystique”) and Rachel Carson (“Silent Spring”). Jacobs’ vision of the city was bravely and spectacularly feminine: She viewed it as a teeming enigmatic cooperative, a garden of earthly delights, whereas Moses, offering a degraded version of the ideas of the Swiss-French architect and urban planner Le Courboisier (who’d created the template of the future presented at the 1939 World’s Fair), was all about abstract masculine dominion: tall hard buildings, no hint of mess, a city that was nothing but sharp edges.

Since we’re talking about buildings, it’s no stretch to say that there’s something more than a little Trumpian about Robert Moses. His drive to erect looming, impersonal housing was a form of control; his desire to sweep everything else away was even worse — a fascism of the spirit. “Citizen Jane” provides stunning evidence that as the population explodes, more and more cities around the world are being built in the spirit of Robert Moses: acres of skyscraper cages for the anonymous horde. Yet the spirit of Jane Jacobs is heard each time a neighborhood is allowed to evolve. What she fought and defeated, most dramatically by keeping a highway out of lower Manhattan, was the prototype for urban planning that would steamroll everyone it was supposed to be planning for. Jacobs insisted that the city is a place for the people. That’s why it can’t just “serve” them; it has to express who they are. 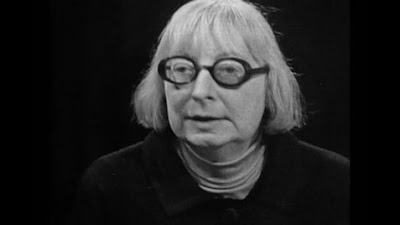